The first day was devoted to ‘Young Generation’ surgeons and trainees. For the first time at an EAFPS conference, the newly elected junior board presented their own session. The ‘Time Capsule’ talks were a highlight, with illustration of how techniques have evolved over the years in each area of facial plastic surgery (FPS). Endoscopic rhinoplasty was used as an excellent example of how modern technology can be used as an adjunct to established surgical methods. 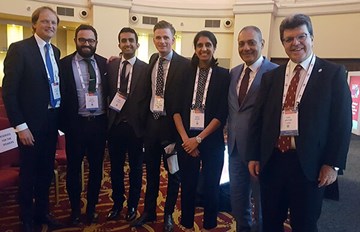 Throughout the programme there were lively panel discussions on complex rhinoplasty, facelift, non-surgical rejuvenation, research and innovations in FPS and practice management. A particular highlight was the keynote joint EAFPS - Rhinoplasty Society Europe panel on ‘The Past, Present and Future of Rhinoplasty’. The international panel of experienced surgeons all giving their insights on complex revision rhinoplasty cases and potential pitfalls.

The Joseph lecture was given by Roxana Cobo, who shared her vast experience and looked back upon her own career path pioneering through the patriarchal world of FPS.

This was followed by the general assembly, where the Presidency of the EAFPS was handed from outgoing President Fazil Apaydin to the new President Hesham Saleh. The election results for the remaining executive board were announced, with Alwyn D’Souza as President Elect, Jose Carlos Neves as Secretary and Frank Riedel as Treasurer. 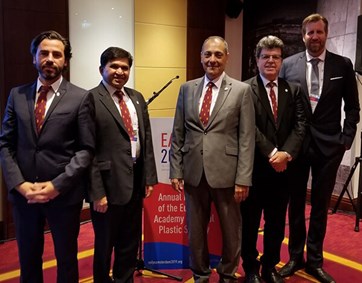 Historic locations abounded throughout the academic and social programme. The lectures and gala dinner took place in the beautiful Koepelkerk, a 17th-century domed church, with a stunning Bach organ as the backdrop to the stage; the largest organ still in active use in the Netherlands. The faculty dinner was held in the historic West Indisch Huis; built in 1617 and the former headquarters of the Dutch West India Company.

The setting in Amsterdam was wonderful with gabled architecture surrounding us and picturesque canals running through the city. Van Gogh, Rembrandt and Banksy exhibitions were easy distractions from the conference hall.

Overall another successful EAFPS conference in a wonderful location with exciting academic and clinical developments and, as always, the chance to catch up with old and new colleagues and friends alike. We look forward to the next meeting in 2020, which will be hosted by our colleagues in Poland. 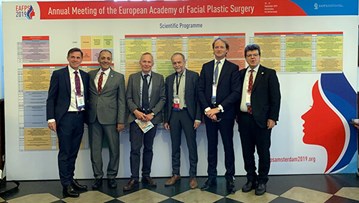 The European Academy of Facial Plastic Surgeons (EAFPS) Annual Meeting 2019 was held in the deluxe settings of 'The Koepelkerk' at the Renaissance Amsterdam Hotel, September 18 - 21 2019. This year’s meeting was co-chaired by Dirk Jan Menger and Gilbert Nolst Trenité, from the Netherlands. Around 400 delegates and faculty from over 40 countries were in attendance. Once again, the conference was well supported by technology, with a conference app available to download prior to arriving and the event can be proud of a good social media presence.

After the welcome addresses, delegates were treated to a wonderful surprise recital at the opening ceremony. Welcome drinks and socialising followed. Sightseeing tours and a gala dinner formed the remainder of the social calendar.

The four day event comprehensively covered all aspects of facial plastic surgery. There were a multitude of quality talks on offer. This year the Tony Bull Award & Joseph Lecture was won and given by Roxana Cobo (Colombia). The new developments and innovations sessions boasted some excellent trainee presentations. Members were also shown the bronze sculpture by Maurits Cornelis Escher, on which the EAFPS logo is based, and were told the story of how it was acquired by the society by Jan de Jong (Netherlands).

Trainees will be glad to know that the academy is considering giving out a prize for the best oral presentation given by a trainee for the first time at the next meeting. The prize will only be open to members, but with membership for trainees currently only €50.00 per year, many may find it worthwhile. See here for more information on joining the society. The next meeting will be in Lódź, Poland. Dates to be confirmed.