Prof Quraishi receives his OBE award from HM the Queen at Buckingham Palace on
14 November 2017. 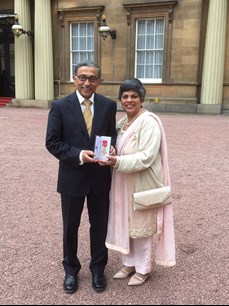 “Only a handful of ENT surgeons have been honoured by Her Majesty the Queen. We could not be more pleased for our friend and colleague Professor Shahed Quraishi, who visited Buckingham Palace to receive his OBE on 14 November 2017. Ray Clarke spoke with him about the experience for the Jan/Feb issue of ENT & Audiology News.” Emma Stapleton

How did you hear the good news and how did you react?

It was on a routine day back from work in early May, I picked up the post from the letterbox and amongst four letters I noticed an ivory coloured envelope with ‘On Her Majesty’s Service’ printed on it. Assuming it to be from the taxman, I left it alone that evening! The following day I decided to open it and the first line said it all. I was all alone at home and at first I really did not know what to do as the last line of the letter stated that I was sworn to secrecy till the official announcement on Her Majesty’s birthday. I could not sleep that night. The following six weeks were tough…

On the day it was officially announced, I was in Beijing on day one of the ENT Masterclass®. It was great to share the news with the international faculty and our Chinese hosts and we celebrated in style that evening in the shadows of the ‘Forbidden city’. My family were with me and enjoyed every minute.

How did your wife and family react?

My wife was the first to know and she was happy for me and for the ENT Masterclass® team. My two children were together when I gave them the letter to read… their expressions were of disbelief. Many hugs and kisses later, they wanted to know if they could accompany me to Buckingham Palace.

Tell us a bit about your feelings from the day at the Palace?

It was a humbling experience. While it is a personal award, I felt that the real winner of the day was our specialty and a ‘Royal recognition’ for the team of volunteers who made ENT Masterclass® a global platform for training. My hands were moist with cold sweat waiting to shake hands with Her Majesty.

ENT Masterclass® has always been a portal for senior colleagues to give back to the specialty. I hope that its current transition from a national platform in the UK into an international network continues.

The transfer of clinical cultures across continents without economical constraints, with the ethos of training, free at the point of delivery is the ultimate goal.

And where next for you Shahed, how will being an OBE impact on your career over the next few years?

I think with this recognition comes responsibilities. The natural effect shall be to increase my commitment to the ENT Masterclass®, right up to the day when I decide to finally hang up my shoes. I fear that my plans for early retirement may be the first casualty. 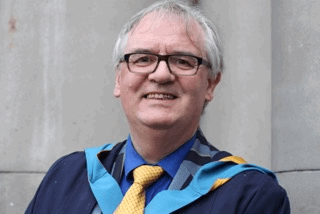