XIIth International Society of the History of Otorhinolaryngology Meeting 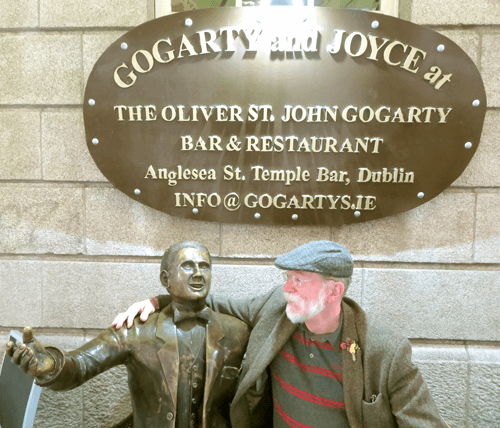 This group is perhaps the smallest (and most élite) to report in this magazine, but this year a record number of attenders (NB as historians and probably classically educated, we shun the Newspeak word ‘attendee’, since as we all know, the suffix -ee denotes passivity). As befits our special interest, we always hold our meetings in splendid historical surroundings in venues teeming with culture and art. This year was no exception; we went to Dublin.

The champagne reception took place in the august surroundings of the Royal College of Surgeons in St Stephen’s Green, which always manages to give me a definite feeling of unease since I took my Primary Fellowship examination there (in the days when candidates actually failed exams in high numbers). After a few glasses of bubbly, a short walk brought us to Ely Square, where the legendary Oliver St John Gogarty, the only ENT surgeon to have a pub named after him, had his consulting rooms. His rooms are long gone but there is now a very pleasant restaurant where we had our dinner.

The following morning at the Royal Victoria Eye and Ear Hospital, where both Sir William Wilde and Sir Robert Woods made important developments in the advancement of our specialty, we had our academic conference. There were notable contributions from our local Irish colleagues. Rhodri Hill (Dublin), Robert Ruben (New York), Ray Clarke (Liverpool) and Max McCormick (also Liverpool) all spoke about Sir William Wilde (Oscar Wilde’s father) and his immense contribution to European ENT and Robbie Woods (Dublin) included his illustrious namesake great-grandfather, Sir Robert Woods, and the legendary Oliver St John Gogarty in a resumé of Irish otolaryngology. Ray then gave a masterly dissertation about Gogarty’s role in the Irish Civil War.

Andrew Maguire (Dublin) intrigued everyone with a story about Roosevelt’s personal physician, ENT surgeon Vice-Admiral Ross T McIntire. Patrick J Bradley (Nottingham) talked about pre-war ENT in Nottingham and Edward Fisher (Birmingham) read a paper based on the JLO Archive about noise and other ear trauma. Albert Mudry (Lausanne) fascinated the audience with his research into the now all-too-frequent unsolicited requests for papers from non-professional scam journals and consequent demands for money. John Riddington Young (North Devon) introduced the world-popular Patron Saint of the Throat, St Blaise of Dubrovnik, and Declan Warde (Dublin) spoke about the ENT anaesthesia practice of Dr John Snow (the cholera epidemiologist). The afternoon session continued with an absorbing dissertation by Kees Graamans (Nijmegen) on audio-visual interaction in the work of the Dutch artist Hendrick Avercamp. Wendy Smith (Kettering) spoke on historical mastoid obliteration and Enrique Perello Scherdel (Barcelona) presented a biopic of his father, Jordi Perelló Gilberga.

Benedikt Folz has kindly invited the Society to visit Bad Lippspringe next September.