Breaking barriers in Uganda: the story of Elaine Mukaaya
By Cheka R Spencer and Eddie Mukaaya

More than 9% of sub-Saharan Africa’s one billion people live with disabling hearing loss, with children having among the highest rates of childhood hearing loss in the world [1]. Sadly, in concordance with the inverse care law – proposed by Julian Tudor-Hart in the Lancet in 1971 [2] - these children often lack access to hearing technology like cochlear implants which would otherwise empower them. This is the story of the Mukaaya family in Uganda and the barriers they surmounted to enable their daughter to fulfil her potential.

‘My name is Elaine. I am 10 years old. I bring you greetings from Uganda. I wear cochlear implants. Without them, I can’t hear you. I am in fourth grade. I like math, science and reading. When I grow up, I want to be a robotic engineer to help many deaf children learn to talk.’
Elaine Mukaaya, addressing the WHO, March 2017.

The Republic of Uganda is a landlocked country in east central Africa named for the Buganda kingdom which encompasses much of its southern territory. In 1894 it was ruled as a protectorate by the UK from whom it gained its independence in 1962. Whilst its past has been marred by political upheavals and civil unrest, the country has experienced of late persistent economic growth. Unfortunately, this growth has not consistently correlated with universal poverty reduction and improvement in health. Whilst great strides have been made in HIV health, ENT and audiology healthcare has not been a priority.

“At times, it felt like we were the only family with a deaf child in the country” 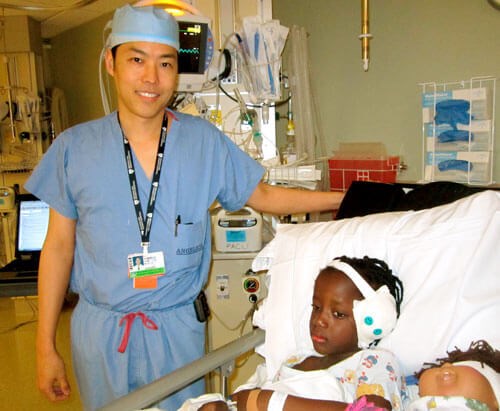 Dr Lee from the Massachusetts Eye and Ear Hospital and Elaine Mukaaya in the recovery room.

Cochlear implantation is the only therapeutic intervention for profound hearing loss. The Ear Foundation, as of 2016, estimated the total number of cochlear implant recipients to be around 600,000 worldwide [3]. Most of these are in developed countries due to the cost implications of the device, its implantation and its postoperative care [4].

This is an account of the parents of a young girl diagnosed with hearing loss in a country with minimal resources. They worked relentlessly to find a solution to enable their first born to regain hearing and be able to talk. Eddie Mukaaya, the father tells us the following story:

We were elated when we found out my wife, Edith, was expecting and looked forward to welcoming our daughter. Tragedy struck at 24 weeks when Edith became seriously sick. Her doctors advised us to terminate the pregnancy in order to save her life, but we refused. Elaine was later born pre-term at 26 weeks. This opened us up to an unprecedented course of events.

She was 1.1kgs at birth and after three days she went down to 900 grams. She was treated for multiple health issues including a heart murmur, kidney failure and jaundice. She literally suffered all the complications that premature babies can suffer. By God’s grace, she managed to pull through. On her first birthday, she was running around like any other toddler would.

At 16 months, after raising concerns with doctors about Elaine’s lack of speech and response to sounds, she was diagnosed with profound sensorineural hearing loss. This was a consequence of the ototoxic antibiotics she had received early in her life. We relentlessly explored all options available in Uganda and Kenya. At times, it felt like we were the only family with a deaf child in the country. Because of the stigma attached to hearing loss in Uganda, many families do not bring their children out in public. For us Elaine was the blessing that we had wanted for so long. We never lost hope.

I later learned of a medical device called a cochlear implant that would help to provide hearing for the kind of hearing loss my daughter had. That to me was all I needed. We started mobilising funds for the cochlear implants. We were put in touch with a surgeon from the Massachusetts Eye and Ear hospital who would also donate his services.

Elaine and I travelled to the US in the winter of 2010 to be evaluated for cochlear implants. She got her first implant in summer of 2010 when she was four years and two months old and, later, in her second ear in 2012 when she was six years old. Whilst the implants were successful, I came to realise that speech therapy and rehabilitation were by far the most important part of the process.

Within the first week of her switch on, she went from being my grumpy, tantrum-throwing daughter to a happy and responsible one. Seeing her learn new things, asking questions about everything and learning to talk brought us insurmountable joy. Today, her development and progress with her implants has made the arduous journey to get here so worthwhile.

“Whilst the implants were successful, I came to realise that speech therapy and rehabilitation were by far the most important part of the process” 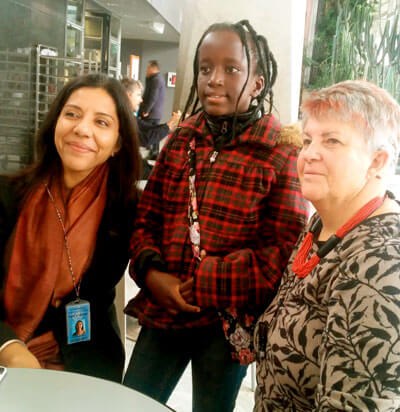 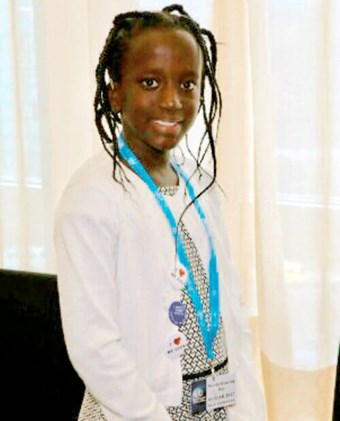 Elaine Mukaaya at the WHO in Geneva, March 2017.

When they realised the transformation the cochlear implants and rehabilitation had produced in their daughter, Eddie and his wife Edith founded Hear His Voice Uganda, a charity that cares for children like their own. “My wife and I chose to share our story by starting this charity with a multidisciplinary approach to early intervention and rehabilitation services for children and individuals with hearing loss in Uganda. Our hope is that this way, families would find services which would empower them, thereby transforming the lives of many children with hearing loss.”

Further details of this programme are available at: https://www.hhvuganda.org

Eddie Mukaaya in March 2017 addressing the WHO in Geneva.

In March 2017, for ‘World Hearing Day’, the World Health Organisation (WHO) invited Eddie and Elaine to speak in Geneva to raise awareness about the need to improve hearing healthcare worldwide. Elaine was the first child cochlear recipient to address the WHO. Their speech emphasised the benefits of early intervention for children with profound hearing loss and expressed their hope that all societies would have access to hearing technology and rehabilitation. Eddie spoke of his desire to transform the lives of deaf children in Uganda by affirming that, “when you give a child access to sound and the ability to communicate, there is no limit to his or her potential.” 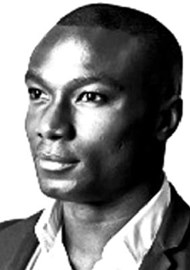 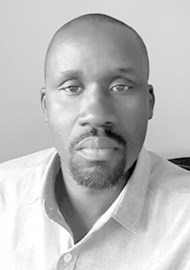