In conversation with Dr Narveshwar Sinha
By Vikas Malik

‘Only if you hear, you speak’
– early diagnosis of deafness

On the occasion of World Hearing Day, Vikas Malik interviewed Narveshwar Sinha, Chairman of IDEAL Charity, a UK-based charity working for the hearing impaired in less developed countries for the last 18 years. Dr Sinha discussed how the charity has lobbied the Indian Government to embrace a universal newborn hearing screening programme in India, similar to the one in the UK.

Dr Sinha, why did you coin the slogan in Hindi, ‘Sunoge to Bologe’ (only if you hear, you speak)?

The slogan emphasises that no one is born dumb. As speech develops by feedback, if deaf children are provided with amplification of sound, using a hearing aid or cochlear implant, very early on in life (before three-to-four years), they start hearing and speaking. Almost all Indian states, unlike many Western nations, have no established universal newborn hearing screening programmes.

Please tell us about the short film Sunoge to Bologe, released on the World Hearing Day.

The film depicts a hearing-impaired boy in adulthood adversely dealing with an emergency. The same scenario is shot again to show how this emergency would have been dealt with if the child’s hearing impairment was picked up early in childhood, and amplification provided. The film has message from Dr Harsh Vardhan, Union Health Minister of India at the time. During the interview, he said, “The Government of India has decided to treat childhood deafness promptly, even if it involves expensive surgery, like cochlear implantation. The Government pledges that all facilities will be made available to the poorer patients, parents and to the children of the nation. We wish to make it (only if you hear, you speak), a revolution in the country”.

The film may be accessed at: www.youtube.com/watch?v=6L4POdTOsxM 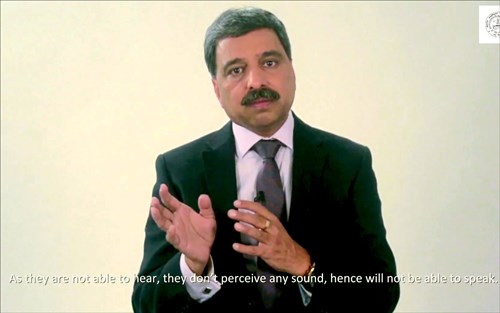 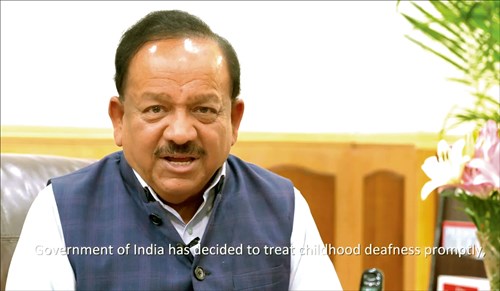 Dr Harsh Vardhan, ENT Surgeon, current member of Indian Parliament and was the
Cabinet Health Minister in the Ministry of Health and Family Welfare and Chairperson of the
Executive Board of the World Health Organisation at the time of recording of the film.

How has the UK been involved in the work you have done until now in the area of hearing impairment overseas?

IDEAL Charity is UK based. We recently organised training programmes for hearing screening professionals across three cities in India (Delhi, Kolkata and Mumbai). Participating agencies included: Victoria Banks (Cambridge hearing screening programme); Gwen Carr, who was involved in establishing the UK programme; Geeta Ubhayakar, a retired paediatric audiologist from London; and Snigdha Sarkar at Anwesha, an Indian charity. This was supported by the Director of All-India Institute of Speech and Hearing in Mumbai. COVID struck, India went into lockdown and the programme could not take off. However, the charity intends to pick up the threads again as soon as things improve.

Through a partner charity in India, the IDEAL Charity carried out a pilot project for a universal hearing screening programme with help from Shelly Chadha, then ENT Professor and current lead of the WHO’s programme for prevention of deafness and hearing loss. Over 10,000 newborn babies were screened within a day or two of birth.

With another UK-based charity (Joining Hands), IDEAL Charity had arranged several camps over the last 15 years for hearing assessment of young children in Andhra Pradesh, in India. It has provided them with digital hearing aids and has arranged speech therapy, when possible. I made regular personal visits to the state and have also lobbied to the government on behalf of the deaf children for cochlear implant provision through Arogya Shree scheme.

“I will aim to gather support from the government at state level to work hand in hand with us. It is a big dream!”

Dr Richard and Joanna Bircher from a UK charity, Helping Uganda Schools (HUGS) found a number of hearing-impaired children in Uganda and approached IDEAL Charity for help. The charity delivered digital hearing aids to be used by these children. A similar initiative was done through a South African Charity, India Cares, in Johannesburg.

Our charity collaborated with the charity ‘Prerna’ in the capital of Assam state in India and carried out a similar initiative. The then Honourable Chief Minister of Assam advised the government to consider this as a pilot project and spread it across the state. Assam is now one of the leaders in this area.

You are a GP now. Please tell us about your association with the ENT world.

I am currently a GP Partner in Greater Manchester but, until recently, I also held the post of  Locum Consultant in ENT in Greater Manchester. I qualified as a medical doctor from Aligarh in India and, in 1984, qualified as an ENT specialist. I trained in the UK from 1988-1991 before returning to India. I was appointed Senior ENT Consultant at Indraprastha Apollo Hospital, one of the premier corporate hospitals in India. I returned to the UK in 1996 and undertook a PhD in Management Studies from Judge Business School at Cambridge University, with my work on medical technology transfer from developed to less developed countries.

What are the future plans for your push towards universal newborn hearing screening programmes in India?

We have made connections with principal secretaries of health and the directors of the National Health Mission in most states in India to bring them on board for a public/charitable partnership. Our UK-based charity intends to invite interest from UK-based ENT surgeons to adopt their parent-state and be responsible for creating a parallel non-governmental infrastructure for undertaking newborn hearing screening. I will aim to gather support from the government at state level to work hand in hand with us. It is a big dream! Unless we dream, things will not change!

Can a similar initiative be possible in other countries which currently do not have universal newborn hearing screening programmes?

Of course, yes. I am happy to share the film. The film is in Hindi but has English subtitles. I am happy to provide support in establishing similar infrastructures in any less developed country.

What is your message to the ENT community based in the United Kingdom and in India?

Please visit the Charity’s web page www.idealcharity.org.uk and get connected with us. Together, we will change the world. 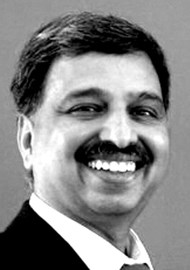 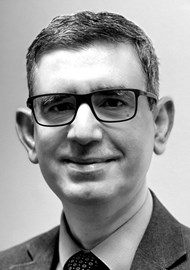