Prominent ears can cause significant social and psychological effects on an individual. The two most common anatomical defects for a prominent pinna are an underdeveloped anti-helical fold and / or enlarged conchal bowl. In the senior author’s practice over the last seventeen years, loss of anti-helical fold alone constitutes nearly 90% of patients with prominent pinna with the rest involving excess conchal bowl width as well.

Through the last century, many procedures have been described to correct these deformities. In this article we describe the ‘cutting burr’ technique to refashion the anti-helical fold and ‘suture’ technique to set back the conchal bowl based on the experience of the senior author with clinical photographs showing a ‘step by step approach’.

Otoplasty was first described in the literature as far back as 1845. In 1915 Downey published a paper on corrective otoplasty, in which he suggested “we should not assume, however, that the indication for such an operation is entirely based upon the desire of the patient to be “better looking,” for in some instances the improvement in facial configuration is of economic importance to the individual, who is undoubtedly handicapped by an unprepossessing appearance”[1], highlighting early in the century the psychological and social impact prominent ears can have on a person. The social and psychological manifestations can produce great difficulty and anguish for a majority of patients, which may explain the high number of surgical techniques and descriptions that have been presented in the literature for the past two centuries. In 1881 Ely described a technique of a continuous, crescentic resection of a strip of cartilage in combination with a concho-mastoidal fixation suture to reduce auricular prominence [2]. Gibson and Davis showed that cartilage incised on one side has the ability to warp to the opposite side[3]. This knowledge ultimately became the starting point for numerous modifications of incision-scoring techniques in the area of antihelix. In contrast to the incision-scoring techniques, Mustardé described in 1963 and 1967 a technique to create a new anti-helical fold that was only based on sutures made of non-absorbable suture material. He used a posterior access to place several individual cartilage mattress sutures to bring the antihelix into the desired position [4]. Many other clinicians have developed their own techniques using various incisional and suture methods. Here we describe two techniques that address the two common causes of prominent pinna.

The most common causes for a prominent pinna are an underdeveloped antihelix and / or an enlarged width of the conchal bowl. These abnormalities may be better appreciated by measuring the discrepancies they manifest on normal auricular measurements. The normal auricle is approximately 6.4cm in males and 6.0cm in females, with a width to length ration of 0.6-1. A child will reach 85% of this length by four to six years of age, which also correlates with the appropriate age to begin surgical planning. The width of the ear is usually 50 to 60% of the height. The normal auricle protrudes 20 to 30° from the skull. When assessing auricular prominence, one of the best objective tools is the helical–scalp distance. The superior point of the helical rim should normally measure 1.0 to 1.2cm from the scalp, while at midpoint, this distance usually increases to 1.6 to 1.8cm. At the lobule, the distance grows to 2.0 to 2.2cm to the mastoid area [5]. A diagnosis of prominent ears can be made when the auriculo-mastoid angle is more than 30°, the mid-auricular distance from the mastoid is more than 20mm or the concha-scaphoid angle more than 110 degrees [6].

As mentioned before, although a majority of the patients with prominent pinna need ONLY refashioning of the anti-helical fold, less than 5% in the senior author’s practice will also need reduction of the width of the conchal bowl by a conchal setback technique.

In this article we will describe the following techniques using step by step clinical photographs:

A. The following is a ‘step-wise’ description of refashioning anti helical fold using the ‘cutting burr technique’ using a series of clinical photographs 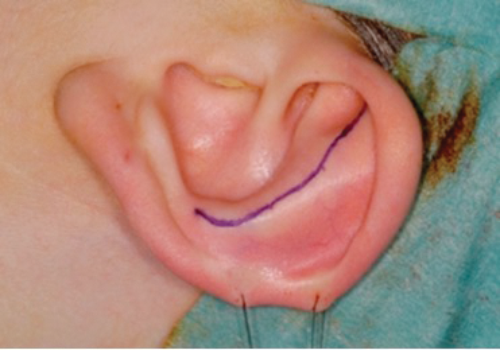 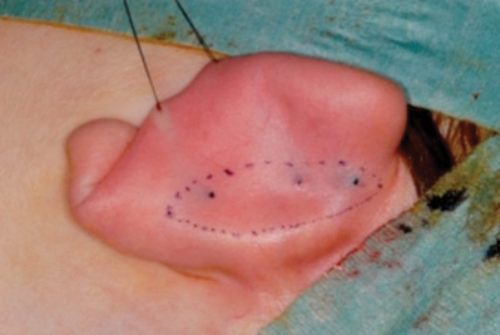 Figure 2: A needle tipped with methylene blue is then passed from the anterior side of the auricle through the cartilage to mark both anterior and posterior surfaces along the anti-helical fold. The ear is then infiltrated with 1:80,000 lignocaine and adrenaline. 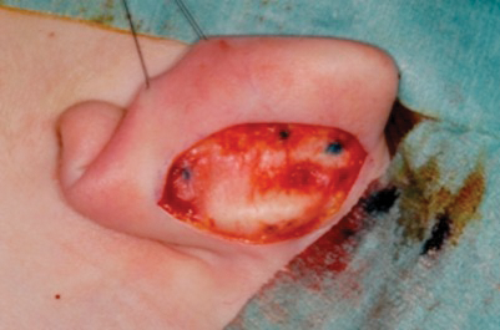 Figure 3: Following this an ellipse of skin is excised from the posterior aspect of the auricle leaving the underlying cartilage intact. The crescent should be approximately 3cm in length and around 6mm at the maximum width. 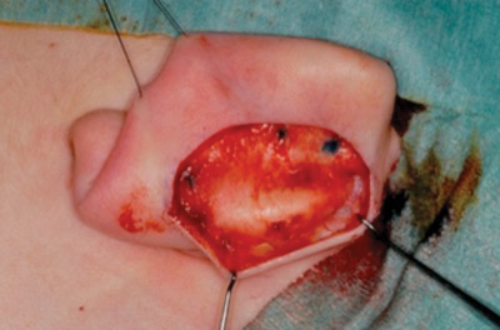 Figure 4: Next the skin is undermined only on the medial mastoid side leaving the lateral edge of the skin intact. This is an example of differential undermining which not only helps in reducing the dead space but also aids in the final cosmetic outcome. 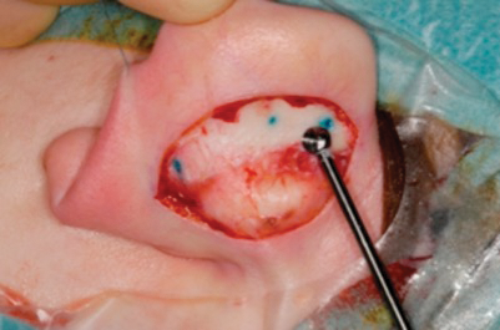 Figure 5: Following the above a large cutting burr is used to thin the cartilage posteriorly. This is done over 5-6mm width centred on the methylene blue mark with lot of irrigation. Care must be taken not to damage the skin. The cartilage should be thinned uniformly like a gentle saucer. The direction of drilling should be in a slight arc from concha working towards the mastoid in a gentle sweep posteriorly and not superiorly. This step is very important in aligning the direction of anti-helical fold anteriorly instead of going superiorly giving an ‘operated look’. 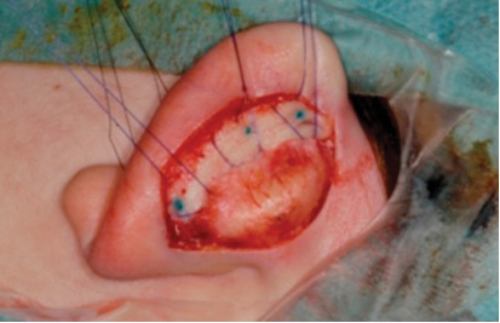 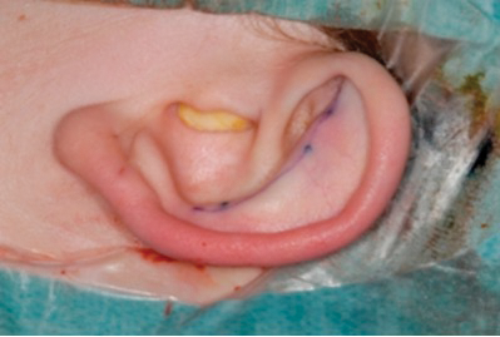 Figure 7: Once the mattress sutures are placed attention is turned to the anterior aspect of the auricle. The mattress sutures are gradually tightened from above downwards until a satisfactory cosmetic appearance is obtained. Finally the wound is closed in two layers. An ear dressing and head bandage is added and should be worn for a week. It should be noted that the dressing and bandage should be placed on carefully to prevent pressure necrosis.

“We should not assume, however, that the indication for such an operation is entirely based upon the desire of the patient to be “better looking”.”

B: The following is a ‘step-wise’ description of ‘conchal setback’ technique to reduce the width of the conchal bowl using a series of clinical photographs. 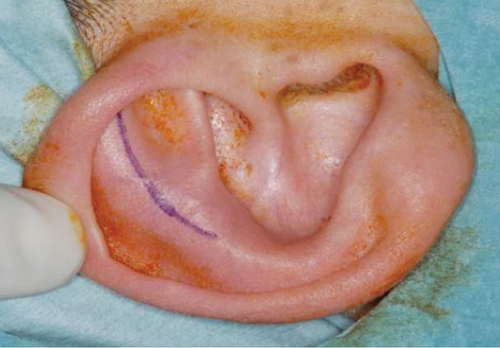 Figure 8: The following patient needed both the anti-helical fold and conchal setback as seen by the shape of the conchal bowl which has extended laterally, instead of a smooth semicircle. 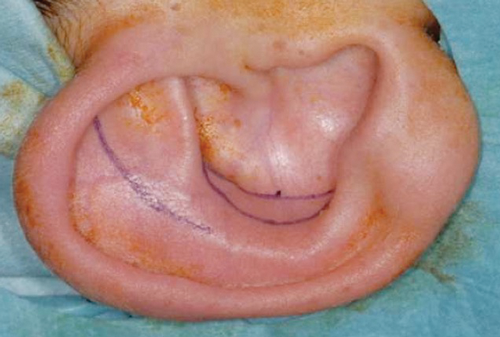 Figure 9: First the area of the conchal bowl width which needs to be excised is ‘marked out’ anteriorly over the pinna, along with the new anticipated anti-helical fold as shown. 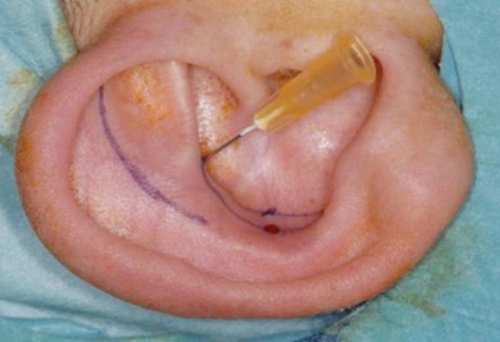 Figure 10: A needle tipped with methylene blue is then passed at marked points from the anterior side of the auricle through the cartilage to mark the medial and lateral borders of the conchal cartilage segment which needs to be excised. The ear is then infiltrated with 1:80,000 lignocaine and adrenaline. 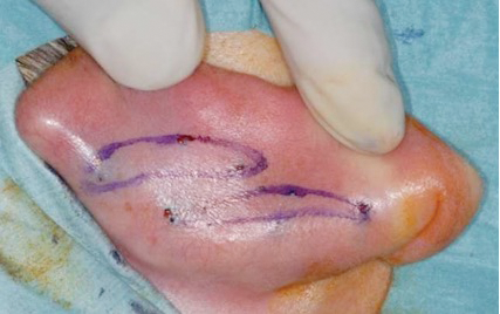 Figure 11: Following this an eclipse of corresponding skin is excised from the posterior aspect of the auricle overlying the lateral border of the conchal bowl, leaving the underlying cartilage intact. 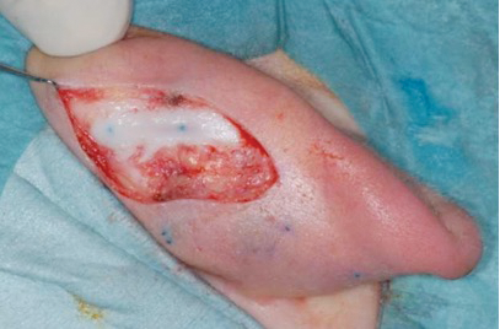 Figure 12: If a patient needed both refashioning of ant-helical fold and a conchal setback, we prefer first to thin the antihelical fold with a cutting burr as mentioned above, then do the conchal bowl width reduction and ‘setback’ and then use sutures to fashion the anti-helical fold in that sequence. 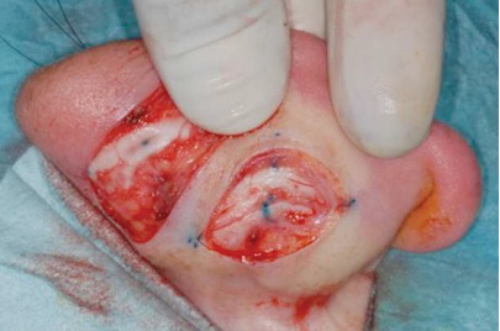 Figure 13: Then identify the area of the conchal bowl to be excised from the posterior aspect of the pinna by following the marked points. 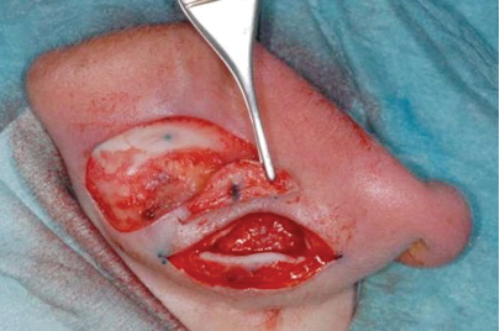 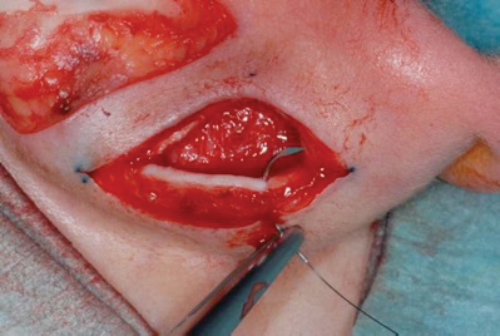 Figure 15: Then the cut edges of the conchal bowl is approximated edge to edge with a 5 /o ethilon or any fine non-absorbable suture. 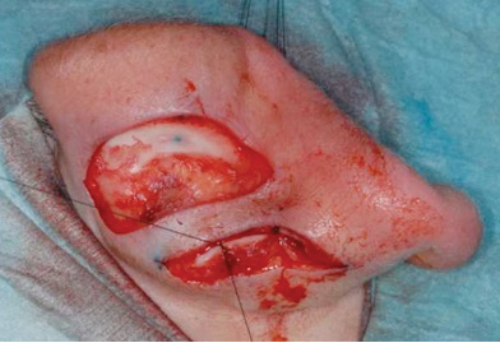 Figure 16: Beware these sutures can extrude and stick through the skin and annoy the patient, hence the sutures should be trimmed quite short. 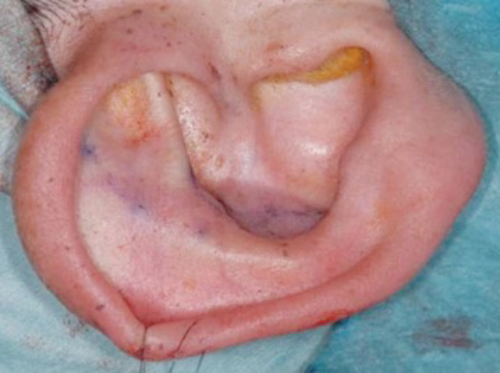 Figure 17: Then finally the antihelical fold is stitched back with sutures similar to that shown in figure 6 of this paper.

As previously mentioned there are many different techniques that can be performed to correct prominent ears. The main aims of the surgery are not only to restore an aesthetically pleasing relationship of the auricle to the skull, but also pay attention to the patient’s and / or parent’s requests, as ultimately the outcomes will be judged by both the patient and the family. The surgical techniques we have described avoid sharp edges, unnatural and irregular contours of the ear cartilage and will give the final outcome of a natural looking cosmetically acceptable ear. 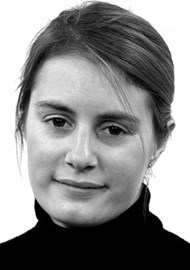 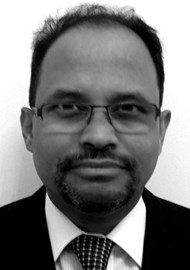