Many of us during training or in established practice will have encountered the complication of anterior skull base CSF leak. This can be a challenging problem to deal with and in this article the authors describe their favoured approach.

Cerebrospinal fluid (CSF) leak arising from the anterior skull base can be idiopathic, due to iatrogenic injury, trauma, congenital anomaly, or rarely from malignant process. Current technology advancement with high-definition imaging and image-guided instrumentations has enabled safer transnasal endoscopic repair (TER) when compared to the traditional open approach to the skull base.

The goal of the procedure is to re-establish a watertight barrier separating the intracranial content against the nasal cavity [1]. There are many reconstructive options in modern endoscopic anterior skull base repair encompassing single or multilayer repair, autograft or synthetic graft and lastly, intranasal or extranasal vascularised flap [2]. It is the senior author’s opinion that vascularised flaps should be employed first to obtain maximum outcome while minimising morbidity. Here, we describe our TER of the anterior skull base using nasoseptal flap (NSF).

Initial assessment begins by confirming the presence of CSF leak by sending the clear rhinorrhoea for Beta-2-transferrin. Once this is confirmed, a CT paranasal sinuses without contrast is performed to identify the skull base defect and enable future image-guided instrumentation during the TER. If the defect is at the region of the planum sphenoidale, a CT head and neck with contrast and MRI brain with contrast are then performed to further delineate the optic nerve and intracranial pathway of the internal carotid artery.

A skin-prick test is performed using 1% w/v fluorescein sodium minims eye drops solution (Bausch & Lomb) against 0.9% sodium chloride at the ventral aspect of the forearm to assess for any allergic reaction to the fluorescein at least 24 hours prior to intrathecal administration. Patients are commenced on Bactroban 2% nasal ointment, to be applied in the nasal cavities, twice daily, one week prior to their operation date.

The procedure is performed under permissive hypotensive general anaesthesia. Below are the steps involved:

Prior to induction, lumbar drain is inserted by our anaesthetic colleague. Following this, 10ml CSF is withdrawn, mixed with 1ml 5% fluorescein sodium and inserted intrathecally. The patient is then repositioned and kept in the reverse Trendelenburg’s position for one hour.

On induction, prophylactic antibiotics are administered; intravenous (IV) ceftriaxone 2g. Following this, Lacri-Lube eye ointment is applied to the eyes to minimise the risk of corneal abrasion. The patient is then repositioned as per standard endoscopic sinus surgery. Xylometazoline hydrochloride 0.1% w/v (Otrivine) is applied to both nasal cavities to prepare the nasal mucosa for TER.

The preoperative CT is uploaded onto the Brainlab Kick image-guided operating platform. The Brainlab headband reference is then applied to the patient’s forehead. The patient’s face is prepped with betadine:saline 50:50.

The nasal cavities are prepped with aqueous Betadine followed by saline. Nasal mucosa is decongested with neuro-patties soaked in 1:1000 adrenaline.

Combinations of 0 and 30-degree endoscopes are used. The area of the defect which was identified from the cross-sectional imaging is approached with the endoscope to examine for any visible fluorescein mixed CSF leak. This can be easily identified due to its colour and pulsatility (see Figure 1). This area is confirmed with the Brainlab probe. 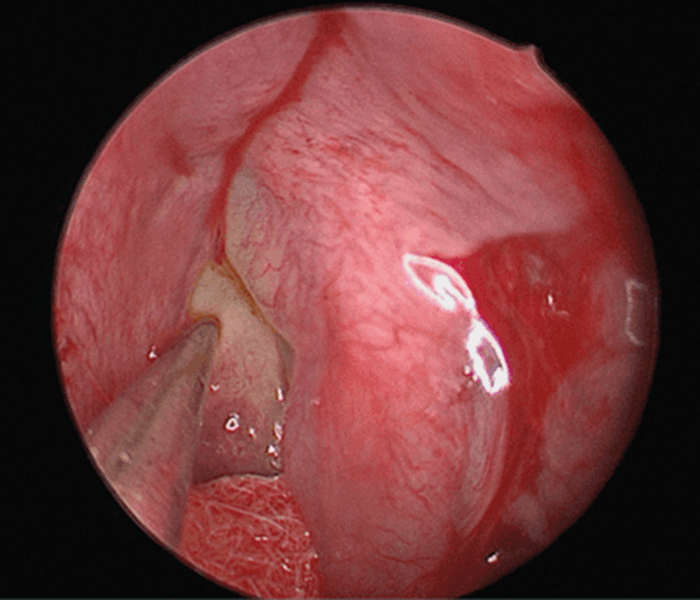 Once the common cavity has been created, any meningoencephalocele at the skull base defect is either excised or contracted using bipolar diathermy (see Figure 2). The surrounding mucosa at the defect is removed to freshen the edge by approximately 5mm, as previously described by Wormald. 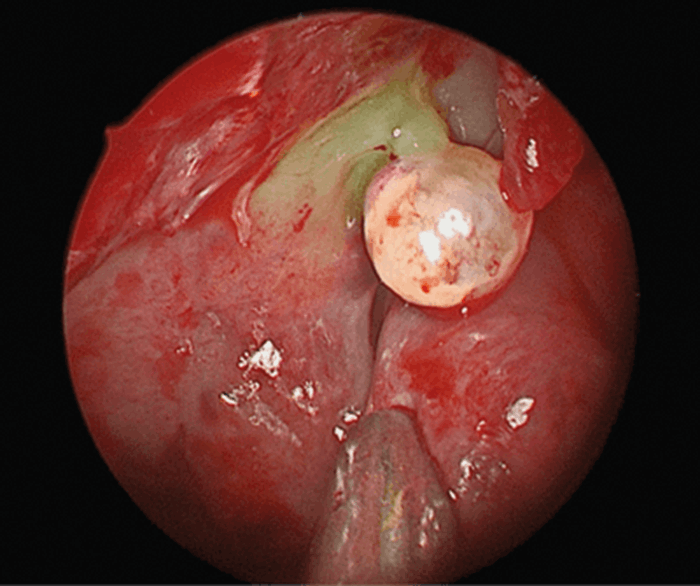 Once adequate mobilisation of the flap is obtained, the flap is overlaid in the correct orientation; mucosa surface facing the nasal cavity. The flap needs to encompass the defect and the area where the surrounding mucosa has been removed. Fibrin glue (Tisseel) is then generously applied to the surrounding area to hold the mucosa. Once the glue has set-in, the Valsalva manoeuvre is performed to check for any fluorescein stained CSF leakage. Nasopore is then inserted for gentle pressure on the flap.

During the postoperative period, no nasal instrumentations including nasal prongs for oxygen delivery should be used to avoid pneumocephalus and to maintain the repair. It is our centre practice to keep the lumbar drain in-situ for three-to-five days following the repair. During this period, the drain should be opened to allow CSF drainage of 10ml/hr. IV Ceftriaxone 2g is continued during the postoperative period until the lumbar drain has been removed. A ward setup and nursing staff that are familiar with lumbar drainage management is essential.

The patient is discharged following 24-hour period without lumbar drain and any signs of CSF rhinorrhoea. We routinely follow-up the patient at two weeks following the TER. Bactroban 2% nasal ointment is prescribed, twice a day for two weeks with a six-week period thereafter of saline douching to decrease crusting. Patients are followed-up at six weeks and six months.

Skull base defect identification is important to ensure a good outcome. Image-guided platform such as Brainlab or Stealth (Medtronic) has revolutionised the identification methods. A blue light filter is occasionally utilised by the senior author if there is discrepancy between the intraoperative findings and the preoperative imaging. In this situation, the senior author will ensure the flap length is adequate to cover the corresponding areas identified from the cross-sectional imaging and endoscopic examination with the blue light filter if possible. 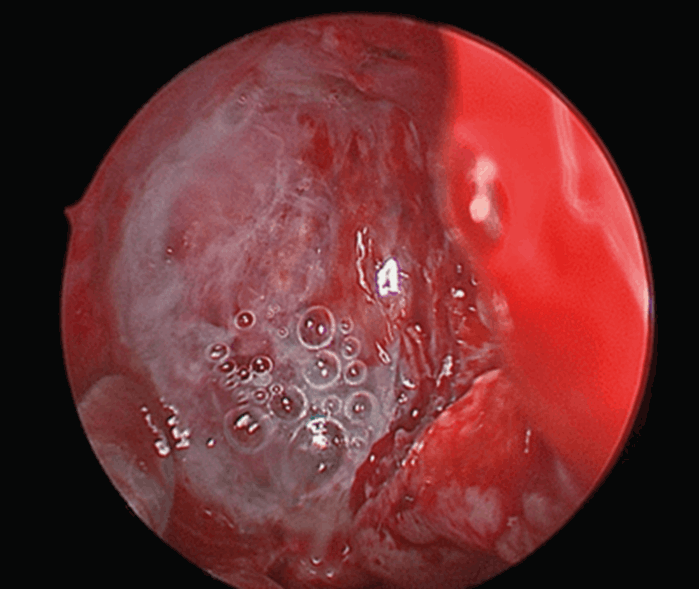 The NSF was introduced by Hadad et al in 2006 and is a time tested proven, versatile intranasal vascularised flap for TER of the anterior skull base defect. Its anterior limb incision is not a fixed point and can be made as anterior as possible, depending on the degree of rotation and mobilisation required to move the flap. Early identification of the defect in the repair stage is important as it allows the surgeon to plan the cavity creation and to consider other intranasal vascularised flaps such as the middle turbinate flap. If the skull base defect is small and in proximity of the middle turbinate flap movement, it is the senior author’s opinion that this flap should be used (see Figure 4). This will obviate the requirement of opening the ethmoidal cells thus maintaining a close to normal physiological ciliary movement of the nasal mucosa during the postoperative period, at the same time reserving NSF as a rescue flap. It is, however, beyond the limit of this article to describe the middle turbinate flap harvesting method, thus the authors would direct keen readers to the paper written by Chakravarthi et al [3]. 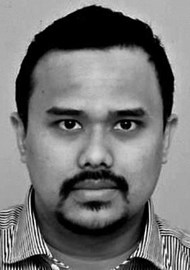 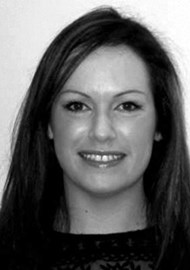