Foreign object removal from the ear or nose
By Jo Williams

The range of nasal and aural foreign bodies that present to accident and emergency (A&E) departments, emergency rooms and minor injury units is limited only by the imagination. Aetiology and epidemiology statistics point to patients being predominantly children in the two to eight age group who present with an unwanted intruding object originating outside the body that has entered natural orifices, in this case the ears and nose. These children, accompanied by worried parents, are often naturally upset in these unfamiliar settings.

Recent findings by the Care Quality Commission reveal patients are waiting longer to be treated with 33% often enduring over a four hour wait before being seen by a doctor [1]. There is therefore an urgent need in the interests of both patient and department, to expedite appropriate and effective treatment without the need for referral or ENT theatre intervention.

“The range of nasal and aural foreign bodies that present to accident and emergency departments, emergency rooms and minor injury units is limited only by the imagination.”

Over the past fifty years the provision of health care has changed dramatically. A reduction in the hours that junior doctors are allowed to work and changes to their training has resulted in an overall reduction in the clinical expertise that they can attain. The nursing profession has responded to this by attempting to meet patient needs, with advanced nurse practitioners leading the way in challenging professional boundaries [2]. This gives nurses the opportunity to develop their skills and take on new roles and interventions.

Assessment of the patient should take place in a timely fashion, so a treatment plan can be formulated in response to what the patient presents with, as the preferred choice of method for the removal of the foreign body is dictated by the exact location of the object, its shape and its composition. The selected procedure is often influenced by a variety of factors including the availability of appropriate instruments that are sometimes not to hand as well as the child and parent’s compliance and skills of the professionals to perform the procedure. High failure and complication rates are common [3].

After initial inspection and an identification of the foreign object – whether it is organic (seed, bean, peas, fly) or non-organic (a bead, sequin, polystyrene ball) one of the following courses of action will be chosen:

These two options can often fail, especially if the patient becomes distressed or even non-compliant. Subsequent attempts may lead to inflammation at the site of the foreign body. Patient trauma is heightened, resulting in the need for referral to the ENT treatment room or theatre. This often incurs a further wait for the patient due to the pressure on ENT resources. If treatment fails at this point, subsequent treatment – often involving sedation and anaesthesia – will be required necessitating patient and theatre preparation and recovery time with its corresponding costs.

Another treatment option considered is use of irrigation, which is often effective though contra-indicated for soft objects which might swell as they absorb fluid.

An alternative solution found to be beneficial to both patient and health provider is the use of suction, held in contact with the offending foreign body in the ear or nose. The suction device is indicated for the removal of spherical foreign bodies, especially small, round and smooth objects such as beads, sequins, polystyrene beads etc., more commonly presented in paediatric cases. The suction device that I refer to is not an ordinary sucker, but one with a soft silicone cup on the end. The silicone piece acts like the end of an octopus tentacle, attaching itself to the spherical foreign body allowing for easy and pain free removal. In my experience a suction device without the silicone attachment is not nearly as successful as it cannot get purchase on the foreign body which instead has a tendency to spin around.

“These children, accompanied by worried parents, are often naturally upset in these unfamiliar settings.”

The suction device enables a foreign body to be removed in an A&E department, a walk-in centre or minor injuries unit, without the need for ENT theatre intervention. Its use as a preferred treatment option thus often negates the need to employ further valuable hospital resources – space, expertise – and therefore can improve one’s work flow.

It would seem from widespread anecdotal evidence that the suction handle treatment option for the removal of specific foreign bodies from the nose and ear is meeting the needs of patients – often children – who demand trauma-free, successful and speedy outcomes. At the same time, it is responding to the ever-increasing pressure on A&E departments to deliver prompt and effective treatments that have the patient at the heart and yet allow the department to function as quickly and as cost-effectively as it is able. 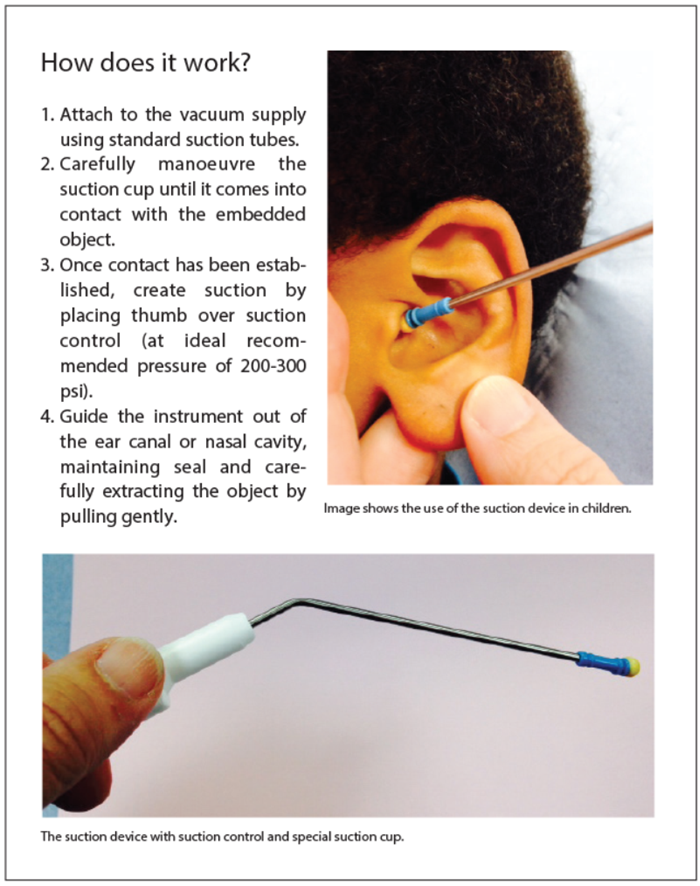 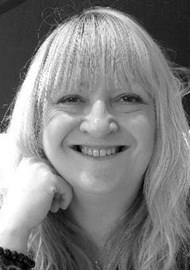