Nasal and aural foreign body removal: another technique for a common problem
By Oliver McLaren and Alexander Walkden

Trying to remove foreign bodies from the ears and noses of children is something we have all struggled with at various times. Many people have their own top tips, and here Oliver McLaren and Alexander Walkden describe an ingenious way of retrieving metallic objects with the minimum of fuss.

Paediatric aural and intranasal foreign bodies are not only commonplace but can be problematic to manage [1]. It is not uncommon for children to have undergone several unsuccessful attempts at foreign body removal before onward referral to ENT. After repeat attempts, not only are the children more likely to become less compliant and decline further attempts at removal, but there is a risk of pushing the foreign body more posteriorly which increases the difficulty of removal.

In these cases the only realistic option is for removal under general anaesthetic. This of course carries the potential risks of anaesthetic as well as delaying the removal of potentially damaging objects.

Metallic foreign bodies can also be problematic in the sense that they are often small and difficult to grasp, making them hard to remove smoothly in a non-compliant patient [2]. There may also be a degree of urgency with intranasal button batteries that can damage the mucosa with the risk of septal perforation and formation of intranasal adhesions, as well as more severe complications with posterior displacement of the battery into the aerodigestive tract [3].

“This simple technique is limited to metallic foreign bodies and requires the use of a small magnet.”

There is a wide armamentarium for foreign body removal. These varying techniques include:

For most of these techniques, direct visualisation is a necessity to reduce the risk of damage to surrounding structures.

In this ‘How I do it’ article, we demonstrate a simple technique for metallic foreign body removal that is more comfortable for patients, has less requirement of specialist skills, uses tools that are readily available in a hospital environment and reduces the need for general anaesthetic.

This simple technique is limited to metallic foreign bodies and requires the use of a small magnet. A very useful and strong magnet that is narrow enough for both intranasal and intra-aural foreign bodies can be found on a nasogastric tube bridle system (AMTBridle, Enteral GBUK).

After identifying the foreign body and confirming it to be metallic, a good discussion with both the child and the parent should be had, explaining the next steps. Children should be warned that they will feel movement within their ear canal and may also hear an audible click. The magnetic probe is then held to the opening of the external auditory canal and advanced until an audible/ palpable click is heard or felt. The probe can then be removed carefully with the foreign body attached. The ear should be examined after the procedure to ensure there is no damage to the tympanic membrane. 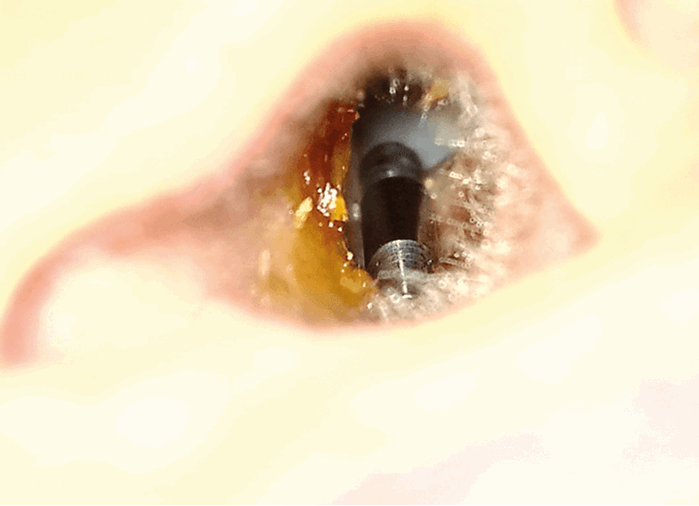 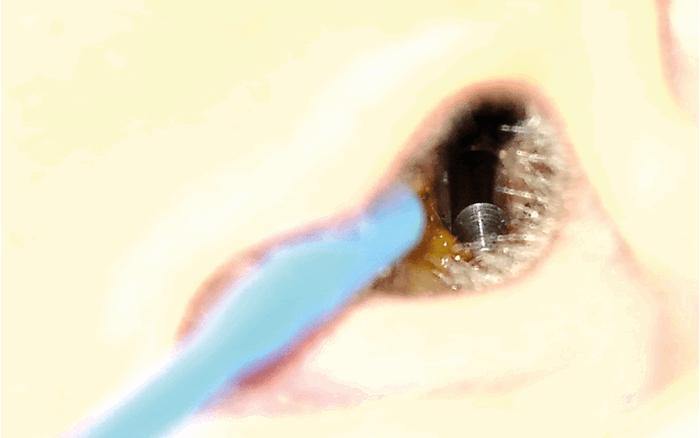 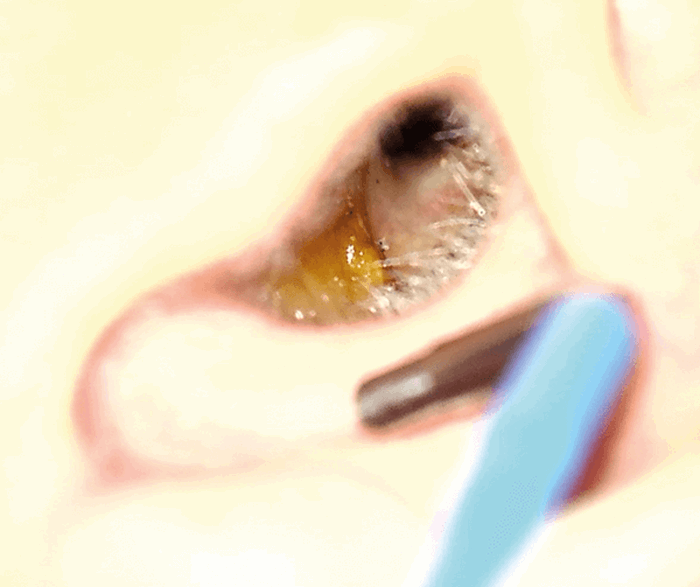 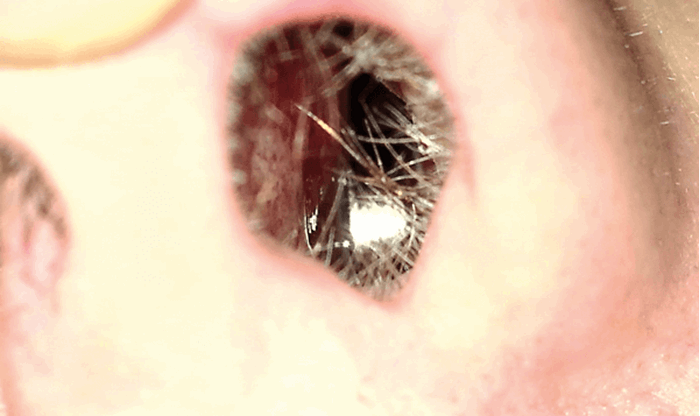 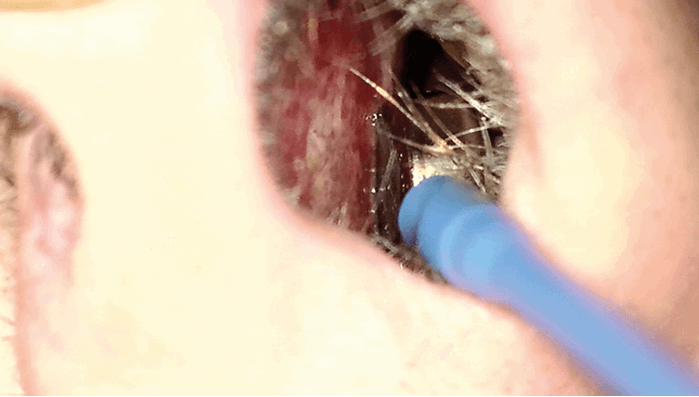 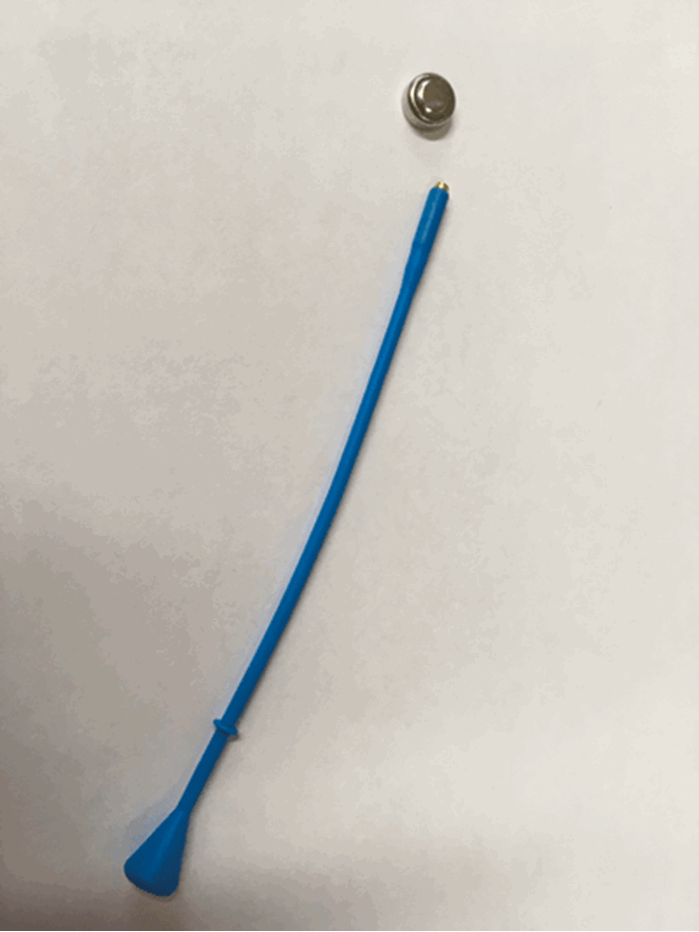 “This is an additional tool that is readily available in the hospital environment and can reduce the need for general anaesthetic foreign body removal.”

Children are naturally inquisitive and, as a result, paediatric intra-aural and intranasal foreign bodies commonly present to the emergency department and are often problematic to manage [1]. Often the first attempt is the best attempt at removing a foreign body without the need for a general anaesthetic. Metallic and spherical foreign bodies can prove challenging as they can traumatise the internal lining of the nose and be displaced further back in the nose [2]. In these situations, the magnetic probe facilitated removal.

Each case of intranasal foreign body must be assessed individually and there is no instrument that works perfectly in every scenario [2], however this is an additional tool that is readily available in the hospital environment and can reduce the need for general anaesthetic foreign body removal. 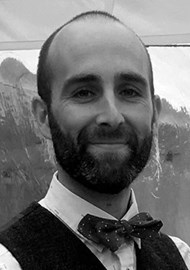 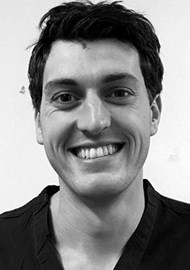