Septal perforations are difficult problems to treat. There are various causes described in literature such as trauma, inflammatory, cocaine abuse but most often they are due to iatrogenic cause (such as septoplasty) or due to trauma. The symptoms due to perforation are variable from being asymptomatic that needs no treatment to debilitating symptoms that require surgical management.

Symptoms are mainly due to changes in the airflow pattern from laminar to turbulent flow resulting in nasal crusting, drying of nasal mucosa, bleeding at the perforation edge. Long-term sequelae in patients with untreated perforations include saddling of the nose and tip ptosis and osteitis of the bony septum.

Nasal septal perforations may be stratified based on size, and as follows:

Conservative managements including nasal irrigation with isotonic saline, application of antibiotic ointment or prosthesis such as a septal button can control the symptoms, yet surgical repairs are required for patients who do not respond to conservative treatments. Surgical repair of septal perforation can be carried out using closed or open technique.

The key factors for the successful outcome are good exposure, adequate mobilisation, tensionless closure, and good approximation of the flaps. Open approach has the above advantages over the closed techniques.

We describe our technique of open septorhinoplasty for repair of medium sized septal perforations and this approach has shown good results in our experience.

Instrument palpation is necessary to evaluate the size of the cartilaginous defect which may be much larger than the mucosal perforation. Routine preoperative investigations are performed for all patients, and only those with no clear-cut aetiology of their septal perforation are subjected to further screening tests including chest radiography, urine analysis, tuberculin test, anti nuclear antibody screen, and biopsy from the edge of the perforation.

Surgery is performed under general anaesthetic.

Nasal preparation – 5% Cocaine preparation is used for nasal decongestion and nasal mucosal infiltration as for open septorhinoplasty approach is done with lignospan 2% (1 in 80000 lidocaine and adrenaline).

A thorough endoscopic examination of the nose is done to remove any synechae or reduce hypertrophied inferior turbinates to allow access. The size of the perforation is assessed (Figure 1). 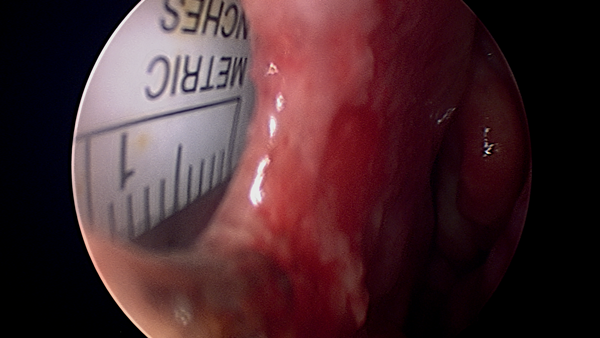 Inverted ‘V’ incision is placed over the columella as in classical open septorhinoplasty procedure. Bilateral marginal incisions are placed along the caudal edges of the lower lateral cartilages and dissection is continued medially down the length of the columella. The columellar skin is elevated off the medial crura and skin dissection is continued dorsally in the supraperichondrial avascular plane until the nasal bones are reached, where the periosteum is elevated using a periosteal elevator.

Dissection is performed between the medial crura to gain access to the caudal septal cartilage, followed by bilateral caudal septal membrane elevation in a strict submucoperichondrial plane. Septal flap dissection is continued until reaching the cartilaginous edge of the perforation, where increased resistance is met during the dissection because of adherence of the septal flaps to each other with no intervening cartilage.

At this stage, the dissection is taken downward to elevate the mucosa off the maxillary crest and nasal floor and laterally to reach the root of the inferior turbinate, where a back cut is made with a no. 15 blade, thus developing a bipedicled floor flap. This flap can be mobilised medially and upward on both sides of the nasal septum to close the mucosal perforation on each side.

The roof flap, which now bridges between the superior edge of the perforation and the undersurface of the upper lateral cartilage, can be dropped downward to help in closing the mucosal rent on each side. In cases with large perforations, more length could be added to the roof flap by extending the dissection to include the mucoperichondrium of the undersurface of the upper lateral cartilage.

Only after completing the roof and floor flaps, the mucosal perforation itself is separated using sharp dissection and its edges refreshed (Figures 3a and b). 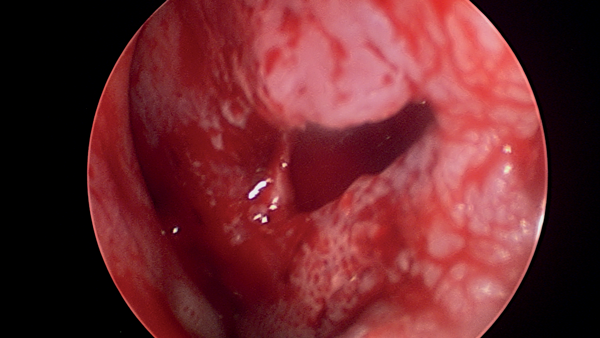 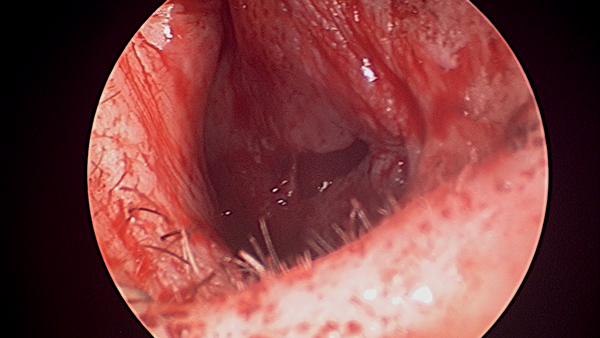 Figures 3a (top) and 3b (above): Mucosal advancement for closure.

Once enough mucosal laxity has been provided, the created flaps are advanced and the mucosal perforation, on each side, is closed using 5/0 PDS interrupted sutures. Closure of the mucosal perforation is started from anterior to posterior and in some cases closure is facilitated by inserting an aluminum suture cover in the septal space to prevent the needle from grabbing the flap on the opposite side (Figure 4). 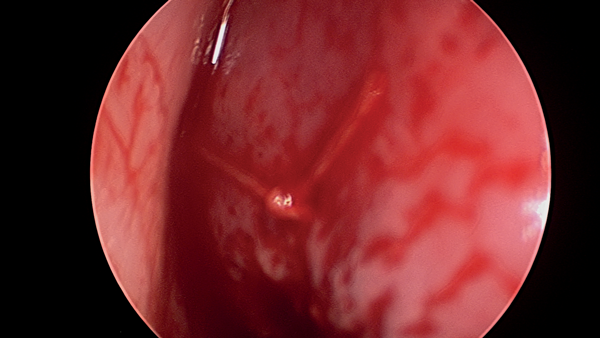 After repairing both septal flaps, the suture cover is removed and a connective tissue graft of permacol is interposed between the repaired flaps and to one side of the septal cartilage remnants, then fixed by three sutures to the dorsal and caudal parts of septal cartilage to prevent its migration. The graft used should be large enough to extend circumferentially beyond the suture line of the repaired mucosal perforations of both flaps. The repaired flaps are then mattressed together along with the interposed graft to obliterate the dead spaces and to reinforce the repair. The upper laterals are then reattached to the dorsal cartilaginous septum using 5/0 polydioxanone (PDS) sutures in a horizontal mattress fashion.

The transcolumellar incision is closed using a deep 6/0 monocryl suture to take the tension off the skin edges. The marginal incisions are approximated using interrupted 5/0 Vicryl sutures.

To protect the repaired septal flaps during their healing phase, a Silastic sheet of 0.02 inch thickness is fashioned and placed on each side of the nasal septum to cover the whole septum and floor of the nasal cavity. The septal splints are secured in place using 4/0 Prolene through-and-through sutures, which should not be overly tight to avoid constricting the repair site when the septal membranes swell postoperatively. The nose is lightly packed with nasopore soaked with bactroban ointment and routine external nasal taping and splinting are then performed.

All patients are discharged home on same day. They are prescribed broad spectrum oral antibiotics and nasal saline irrigation for two weeks. Both external and internal splints are removed on tenth day. Patients are followed up at six weeks and six months (Figure 5). 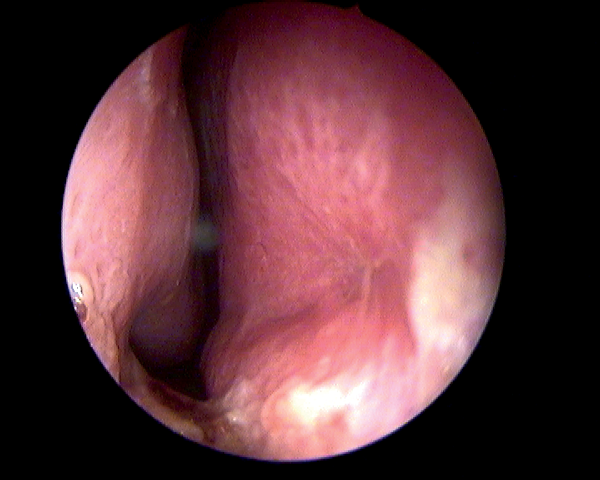 From literature it is evident that septal perforations are difficult to treat. Open rhinoplasty approach provides wide surgical exposure, allows dissection and advancement of mucosa underlying the upper lateral cartilages easily. This technique is used for medium septal perforations with good results in our institution. 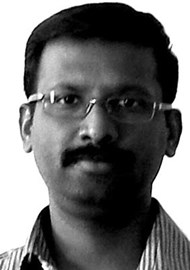