Many ENT head and neck surgeons are now involved in thyroid surgery. This can also include the need to explore the parathyroids, either to preserve them or indeed to resect parathyroid adenomas. David Smith, a highly experienced endocrine surgeon from Dundee, shares his advice and techniques for parathyroidectomy.

The first step of a parathyroidectomy is to establish the diagnosis of primary hyperparathyroidism (PHPT) – make sure that the patient has had serial serum calciums with PTH levels performed. In addition, they all should have phosphate, Vitamin D, 24-hour urinary calcium excretion and urine calcium clearance ratio checked. Bone density DEXA scanning and an abdominal ultrasound scan (USS) to check for nephrocalcinosis are helpful in making the decision for operation.

Guidelines exist for indications for surgery [1] but in general, fit patients aged under 65 all probably benefit from surgery. Ninety percent of PHPT is caused by an adenoma of a single gland and 10% by multiglandular disease (MGD) – either more than one adenoma or four gland hyperplasia.

Once the diagnosis is confirmed, preoperative localising studies can help to target the potential parathyroid adenoma. A dual isotope 123 iodine / 99mTc sestamibi scan helps to localise the parathyroid adenoma - if this is positive (see Figure 1) a parathyroid USS can be performed and, if both scans are concordant with the location of the abnormal gland, a targeted approach can be made by a unilateral neck exploration (UNE) or focused single gland approach. A USS is useful also if there is a palpable thyroid nodule so that this can be assessed preoperatively (with fine needle aspiration if required). If imaging fails to localise preoperatively and I think that the neck exploration is going to be awkward (short stout neck), or if the patient has autoimmune thyroiditis (can be difficult with surrounding lymph nodes and atrophic thyroid), I may consider a preoperative 4D CT scan to aid localisation. Patients with non-localised imaging will require a bilateral neck exploration (BNE).

“A minimally invasive parathyroidectomy will only target and remove the abnormal gland without looking for the ipsilateral normal gland and, in these cases, IoPTH should probably be performed.”

The general principle of parathyroidectomy is based on either BNE or localised UNE approach. Potentially useful adjuncts include intraoperative PTH assay (IoPTH). In a UNE, the side is explored and the abnormal gland excised and the other (normal) gland identified. A minimally invasive (focused) parathyroidectomy will only target and remove the abnormal gland without looking for the ipsilateral normal gland and, in these cases, IoPTH should probably be performed. The size of the scar is not a cosmetic issue for the vast majority of patients, and routine IoPTH adds to the cost / duration of the procedure. I tend to favour doing a UNE approach (and trying to identify the ipsilateral normal parathyroid) for concordantly localised glands (on sestamibi and USS) and a BNE for those cases in which the sestamibi scan is negative (10-15% chance of having MGD).

The consent process should include aspects of possible recurrent laryngeal nerve injury, postoperative hypocalcaemia, and a 3% chance of failure (i.e. not finding the responsible gland and persistent hyperparathyroidism).

I use a small silicon bag under the scapula and a head ring to keep in the neck in a neutral / slightly extended position, and a slight reverse Trendelenburg. I infiltrate the neck with 10mls 1% lignocaine with 1:200000 adrenaline. For a UNE, if the scans suggest a superior gland, I will use a lateral approach between the sternocleidomastoid and the straps; if an inferior, I will go in the midline between the straps. The dissection goes down the groove between the thyroid and the carotid sheath down to the prevertebral fascia. 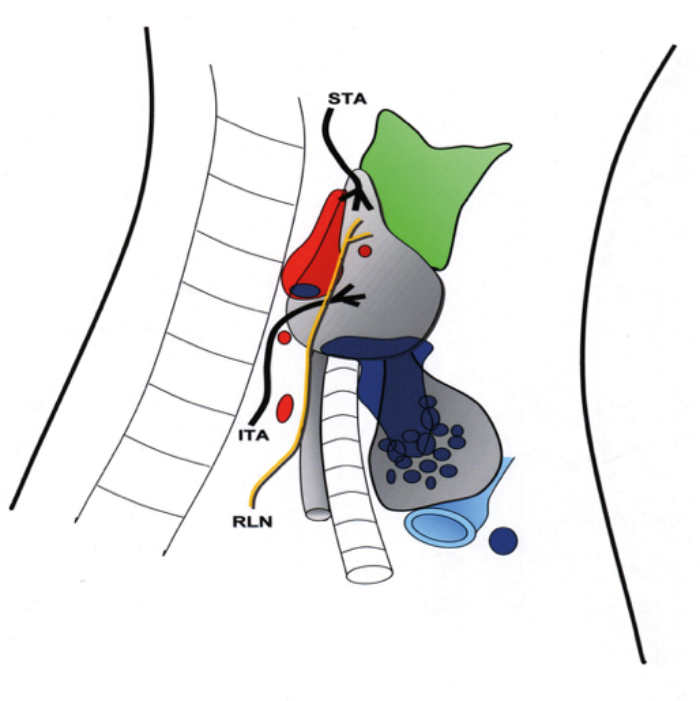 “Eighty percent of normal superior parathyroid glands are found in a 2cm area, centred 1cms above the junction of the RLN / ITA.”

If the glands cannot be identified, have a plan in place:

Figure 3 (left). Normal Parathyroids – as shown by the two dissecting forceps. Note the lymph node dorsal to the superior parathyroid which has a more granular appearance than the parathyroids. 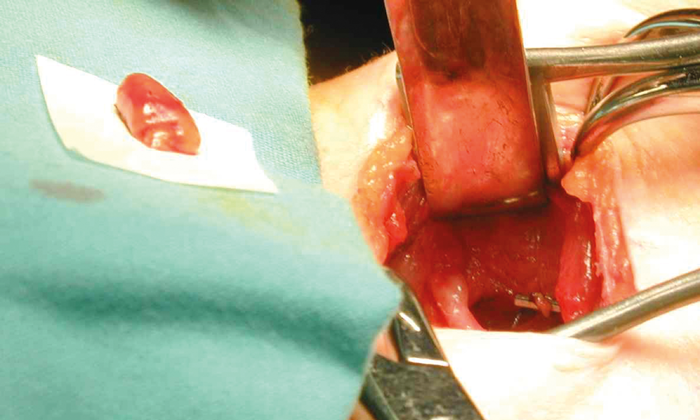 Figure 5. The superior parathyroid adenoma excised, with a clip at its vascular pedicle.

I use 3/0 vicryl for the straps and platysma and 4/0 subcuticular vicryl rapide for the skin.

Following a postoperative calcium and PTH check, the patient can be discharged the same day, if well. At six-week follow-up, if the corrected calcium is normal and the pathology confirms an adenoma, the patient can be discharged from routine follow-up with an annual calcium check by the GP. They should probably take vitamin D supplements, e.g. Adcal D3 one tablet twice a day for at least a year postoperatively to help with the bone remodelling process. Patients with osteoporosis should have a DEXA scan at two years following surgery, and if still osteoporotic, consider the use of bisphosphonates. 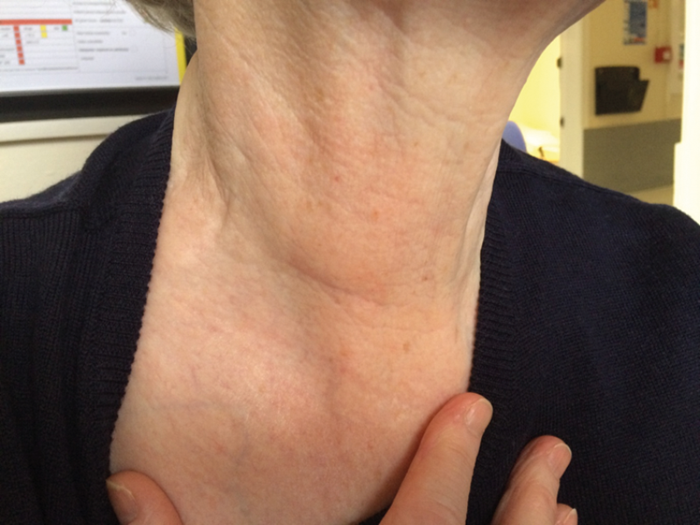 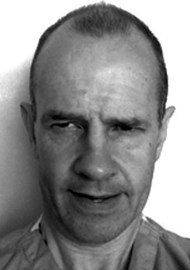