Pinnaplasty for prominent ears
By Kirsten Stewart and David Walker

Pinnaplasty is a challenging yet rewarding procedure for which many different techniques have been described. In this article the authors describe their favoured technique, including the important postoperative care.

Prominent ears can be a source of significant psychological distress in children as a result of teasing, which often begins in school. Usually there is no associated functional impairment and surgical correction aims to improve cosmesis, although congenital syndromes can be associated with pinna abnormalities.

Surgery can be offered to children with prominent ears within the UK NHS, and ideally should be performed between the ages of five and 18 [1]. Cartilage moulding devices can be beneficial for prominent ears in the neonatal period when the cartilage is most malleable.

Pinna prominence is the most common auricular deformity, affecting 5% of the Caucasian population. Prominent ears can be caused by several anatomical factors but is commonly due to a reduced anti-helical fold. The conchal bowl depth and angle can also affect the prominence. Many other deformities are described, including ‘lop ear’, Stahl’s deformity, cup ear, cryptocia and microtia. This article describes cosmetic surgery for pinna prominence only.

“The child must desire surgical correction and be involved in the consenting process. Surgery should never be considered for children who are indifferent, or for parental concern alone”

Facial symmetry and proportions are analysed and considered for all cosmetic procedures. Following a general ENT examination, the pinna is assessed for overall shape and prominence particularly when viewed from the front. The patient’s specific concerns must be addressed. Deviations from the cosmetically acceptable shape can be apparent at the antihelix, the concha, the temporo-mastoid angle and the lobule. Quantitative objective soft-tissue facial measurements have been described, although assessment is frequently subjective [2].

The underlying anatomical abnormality should be identified so that this can be addressed during surgical correction. The aesthetic outcome is crucial for postoperative patient and family satisfaction, and therefore realistic surgical planning is essential to the overall treatment objectives. The child must desire surgical correction and be involved in the consenting process. Surgery should never be considered for children who are indifferent, or for parental concern alone.

Pinnaplasty surgery refers to all operations to reshape the pinna, and more than 200 techniques have been described. Techniques can be classified as cartilage sparing, cartilage cutting, or combination methods.

Cartilage-sparing techniques gained popularity following Mustarde’s case series describing suture manipulation to achieve the optimum anatomical position of the pinna [3]. A new antihelical fold can be created with a series of precisely controlled mattress sutures at multiple levels before securing. This technique is versatile, minimises cartilage injury and maintains the potential for reversibility.

Cartilage scoring techniques work on the principle of the cartilage bending eccentrically to the opposite side when one cartilaginous surface is abraded, and techniques utilising this ‘anterior scoring’ technique have been described by many surgeons in Europe and the USA [4]. Minimal access techniques are described but not widely practised [4].

We describe a combination technique utilising suture fixation and anterior scoring. The procedure is performed under general anaesthetic and the head is draped to reveal both pinnae. The posterior pinna is marked with a superior to inferior dumbbell shape (see Figure 1). The underdeveloped antihelical fold position is marked with methylene blue, and a line for access to the anterior cartilage is marked, usually hidden by the helical rim. Local anaesthetic with adrenaline is injected on both sides of the pinna. 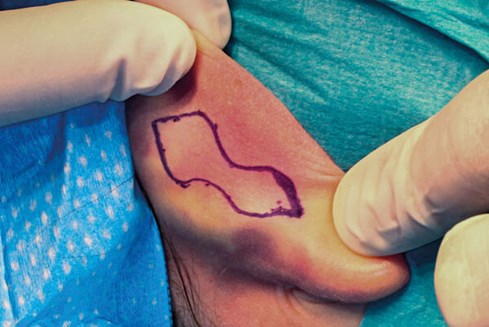 Figure 1. The dumbbell skin incision drawn on the posterior pinna. 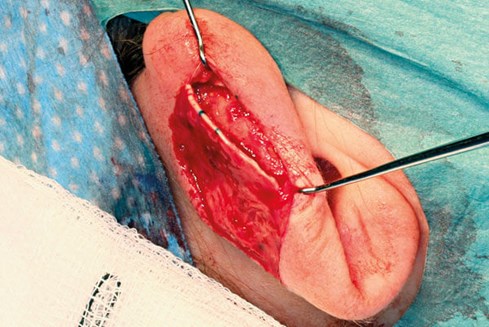 Figure 2. The free edge of the cartilage accessible for anterior scoring. 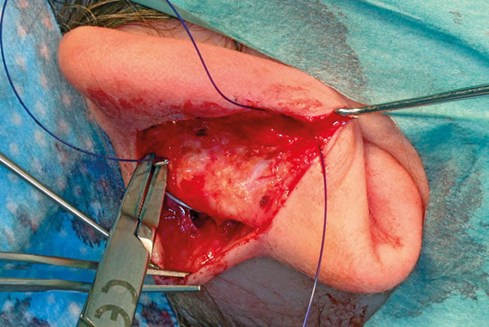 Figure 3. Placing the suture between the mid-helix and the mastoid fascia. 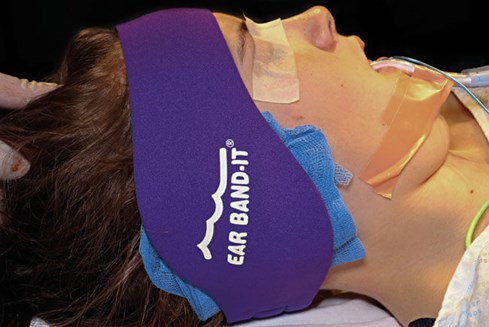 A horizontal mattress suture is placed through the perichondrium of the mid-helix just proximal to the helical rim and is anchored to the periosteum of the mastoid bone with 3-0 PDS to rotate the conchal bowl towards the head (see Figure 3). The wound is closed with interrupted 5-0 vicryl rapide and the ear is dressed with cotton wool and antibiotic ointment. Swabs and an ear band-it® dressing are applied (see Figure 4). The patient is discharged home later the same day if well, and then reviewed three days postoperatively for dressing removal. The ear band-it® should continue to be worn at night for three weeks. Outpatient clinic follow-up is arranged at three months. Clinical photographs are taken before and after surgery routinely. Figure 5 shows preoperative and postoperative photographs. 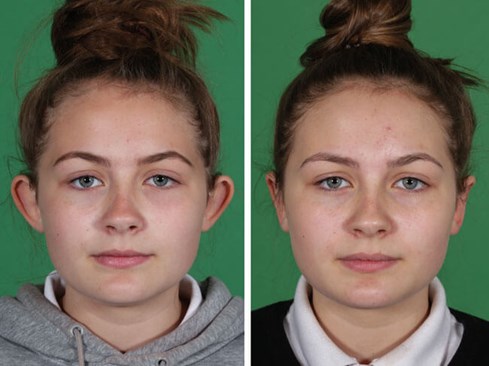 Complications following pinnaplasty are thankfully rare, and postoperative satisfaction is high. Early complications include pain, itching, bleeding, and haematoma development. Infection, if severe, can lead to wound breakdown and cartilage involvement. Late complications include the development of keloid scars, which can be difficult to manage. Cosmetic dissatisfaction, asymmetry, recurrence of the deformity and numbness can also occur [5]. Skin loss has been reported as a complication of cartilage scoring but this has never been an issue in the senior author’s experience. It is more likely to relate to pressure necrosis from a tight head bandage left on for too long.

Acknowledgements: The technique is derived from that taught to the senior author by colleagues at Yorkhill Children’s Hospital in Glasgow and their training is acknowledged. Patient consent was obtained for all images used in this manuscript. 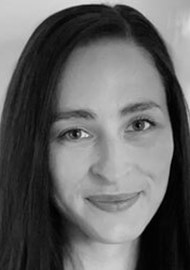 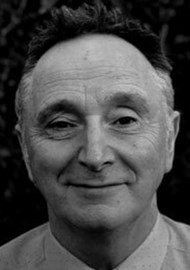