Recent advances in endoscopic technology allow the ENT surgeon to access the salivary gland ductal system for both diagnostic and therapeutic reasons. In this article the authors share their experiences with using this technology, both as a standalone procedure and in conjunction with open surgery.

Obstructive salivary gland diseases are relatively rare in absolute terms. Epidemiological estimates suggest a lifetime prevalence of sialolithiasis, a main reason for recurrent salivary gland swelling, of about 0.45%. In 85-90% of cases, the submandibular gland or duct are involved [1]. Predominant diagnostic procedures to determine the cause of salivary gland swelling are (bimanual) palpation and sonography [2].

Other imaging modalities such as MRI, MR-sialography and CT are reserved for special cases such as evaluation of the deep parotid regions or the parapharyngeal space [3]. Sonography with 7.5-13MHz transducers allows detection of stones as small as 1mm. However, especially in unresolved cases, sialendoscopy can also be used to diagnose salivary gland diseases. In this way, not only smaller concretion, but also inflammations, kinking and stenosis of the duct can be visualised [4]. 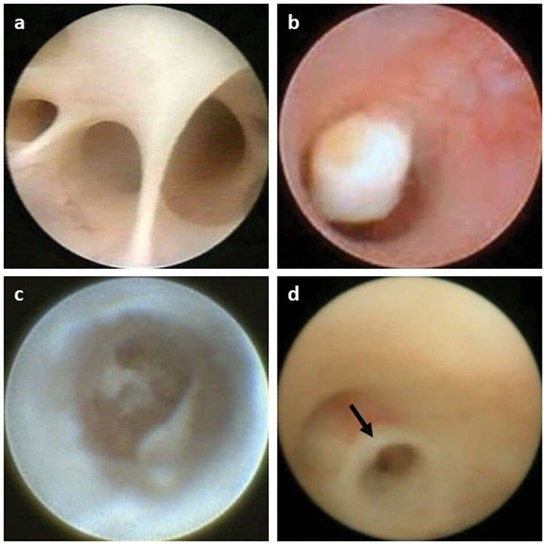 The normal salivary duct presents as an approximately round, salmon-coloured duct structure, the lumen filled with clear rinsing fluid and saliva and branching into several smaller intraglandular ducts (Figure 1a). Depending on the individual anatomy, endoscopy can be performed up to the third generation of the salivary duct system. Stones usually appear as yellowish concretion with a smooth or irregular surface which, depending on their size, can completely obstruct the duct or float in the duct (Figure 1b). Chronic inflammation is characterised by cloudy, flocculent or filiform fibrin exudates, the duct wall often appearing whitish (Figure 1c). Stenoses can be identified by a pinhole-shaped or long-stretched narrowing of the lumen (Figure 1d).

Various semirigid endoscopes with diameters of 0.6 to 1.8mm are used for sialendoscopy. Endoscopes with two channels (for light and irrigation) are suitable for diagnostic endoscopy or for irrigation treatments while therapeutic endoscopes have an additional working channel for the introduction of mini instruments such as baskets, forceps or laser fibres. Irrigation (e.g. with isotonic saline or distilled water), a light source with light guide, a monitor with video cable for transmission of the endoscopic image and instruments for dilatation of the duct are further necessary for sialendoscopy (Figure 2). 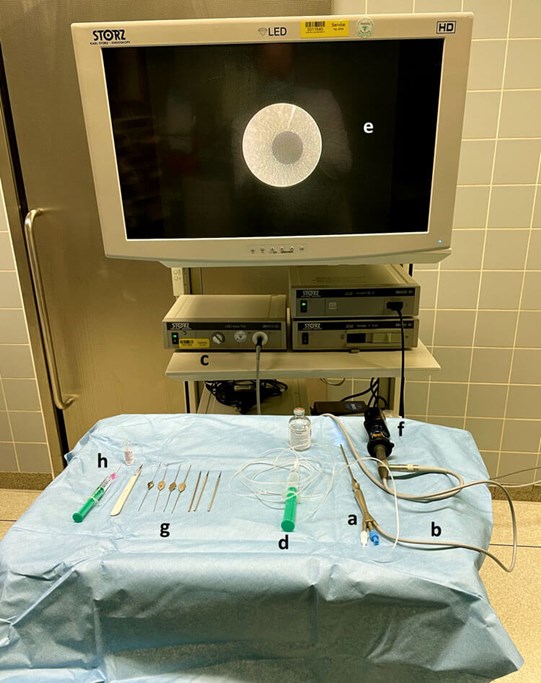 The procedure can be done under local or general anaesthesia. In time-consuming cases (e.g. in the presence of multiple salivary stones), in cases of intolerance to local anaesthetics, in anxious patients and in children, usually a general anaesthesia is performed. Admission to hospital is usually not necessary, but monitoring of cardiovascular function must be secured. Local anaesthetics with a short-to-medium duration of action are used for local anaesthesia and directly instilled into the salivary duct with the aid of a peripheral venous cannula. Essential is sufficient dilatation of the duct with probes and dilators.

During endoscopy, the inherently collapsible duct must be dilated by irrigation in order to allow navigation. If probing of the ductal ostium is not successful and the duct must be incised, only short incisions should be performed to avoid retrograde draining of irrigation leading to a duct collapse. In some points, parotid sialendoscopy differs from submandibular gland endoscopy: in general, Stenson’s duct is usually easier to find and dilate but navigation of the endoscope is more difficult due to the natural kinking of the duct caused by the buccinator and masseter muscles. In Wharton’s duct, identification and dilatation of the ostium can be very arduous, whereas navigation of the sialendoscope is usually unproblematic. Sialendoscopy should not be performed in cases of acute sialadenitis, firstly because the procedure would be too painful for the patient and, secondly, in order not to induce further spread of the inflammation. If a via falsa is created besides the duct, the procedure must often be stopped and repeated about two weeks later, as the real duct can hardly be identified any more. Additionally, there is often a considerable swelling of the floor of the mouth or cheek due to bypassed irrigation.

Common indications for therapeutic sialendoscopy are:

a) irrigation of the salivary duct system (e.g. with steroid-containing solutions) in cases of recurrent inflammation such as chronic recurrent juvenile or adult parotitis [5];

b) transluminal dilation and ablation of salivary duct stenosis [6];

Whether sialendoscopy should be considered for the treatment of salivary stones primarily depends on the size and location of the concretion. In general, stones with a diameter of more than 5mm can hardly be removed endoscopically because the duct lumen is too small for stone extraction. Furthermore, these stones often obstruct the duct completely so that there is no space for putting instruments around the stone. Stones that are overgrown by mucosa, those that lie directly behind a kinking or in a small branch of the duct, and concretions located deep in the salivary gland can usually not be endoscopically removed either. It must also be evaluated whether a stone could alternatively be removed by a short incision of the salivary duct since this procedure is less time-consuming. Duct incision is more suitable for all stones located close to the ostium of Wharton’s duct.

Conversely, given the high risk of stenosis of the Stenson’s duct, treatment of stones in the parotid duct is a domain of endoscopy, provided that the concretion is not too large. The ostium is the narrowest part of the duct so that it usually has to be incised for a short distance in order to be able to extract a stone which was trapped endoscopically with a basket. However, incision of the ostium of the Stenson‘s duct should always be as limited as possible and it should be combined with the insertion of a salivary duct stent in order to reduce the risk of stenosis.

Treatment of recurrent swelling of one or both parotid glands involves irrigation with steroid-containing solutions. An initial sialendosopy is usually followed by several irrigation procedures in an outpatient setting. In many cases, repeated irrigation reduces the number and severity of swelling episodes. The juvenile form of chronic recurrent parotitis is a self-limiting disease with complete and functional remission of the glands by puberty, whereas the adult form is usually chronic.

Duct stenoses that are endoscopically dilated, curetted or otherwise ablated also tend to recur. The effect and duration of any stent placement in the affected duct and the benefit of repeated duct irrigation with steroids have not definitely been clarified yet. 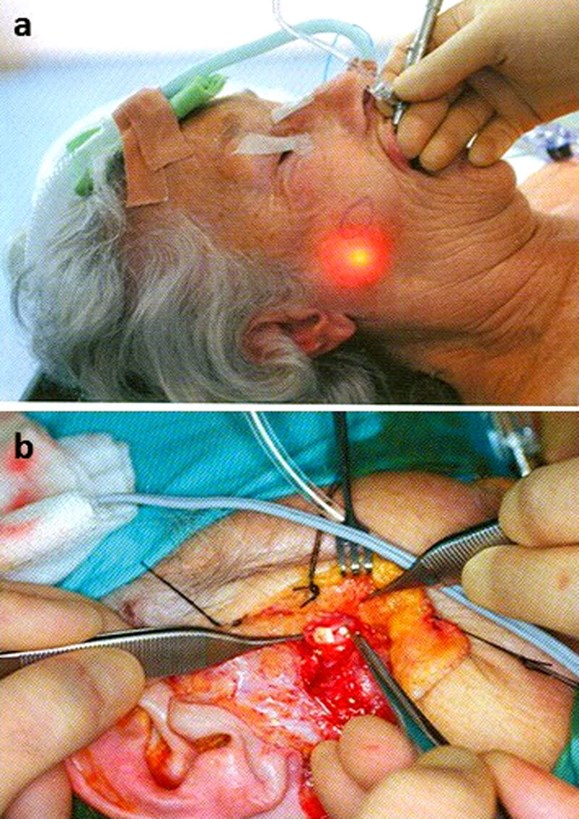 Figure 3. Intraoperative situs of a two-way procedure: (a) identification of the stone position by the light
of the sialendoscope; (b) and removal of the stone via an external parotidectomy approach.

Sialendoscopy in combination with other therapeutical procedures

Sialendoscopy is not isolated from other procedures of salivary stone therapy. Many of these procedures can be combined with each other. Examples are:

a) fragmentation of a large salivary stone by extracorporal shock wave lithotripsy (ESWL) and removal of smaller fragments by sialendoscopy at a later time;

b) visualisation of a salivary stone in the parotid gland by means of the endoscope light and preparation to the stone via a parotidectomy approach; so-called two-ways or rendezvous procedure) (Figure 3).

c) combination of sialendoscopy with intraductal lithotripsy (e.g. via an endoscopically-introduced laser fiber or pneumatically using a so-called stonebraker). 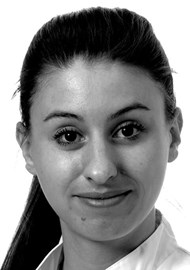 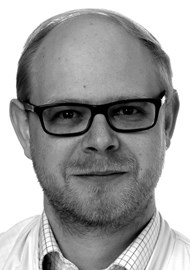