In conversation with Alan Gibb
Interviewed by Emma Stapleton

Esteemed ENT surgeon Alan Gibb is held in high regard for his achievements in ORL, academia and teaching. In this article he shares his memories of a life devoted to ENT and medicine with ENT and Audiology News Trainee Matters Editor, Emma Stapleton. 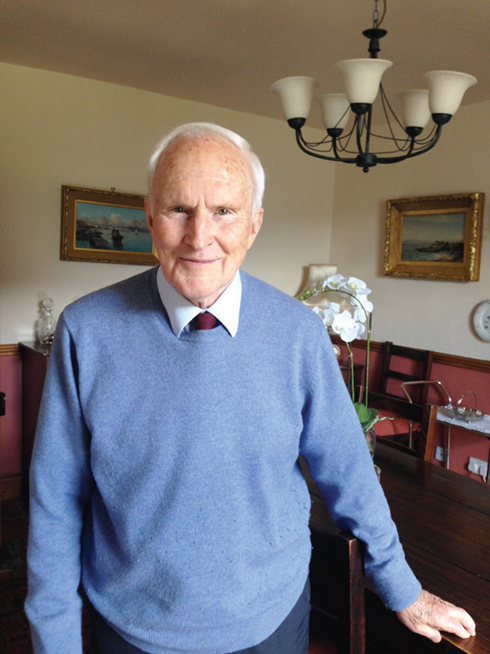 I first met Alan Gibb at a British Society of the History of ENT meeting. I spoke on Arthur Logan Turner, and was trumped by a retired surgeon from Dundee who’d brought along some original Arthur Logan Turner correspondence! That day, I realised that there’s a wealth of wisdom and history to be learned from colleagues still alive and well.

Alan Gibb and his wife live in the beautiful Cairngorms, with their dog Isla. Gibb turned 96 this year, and looks extremely well. He reports feeling “pretty good” despite some recent joint discomfort, which came on after a fishing trip to the Highland lochs. 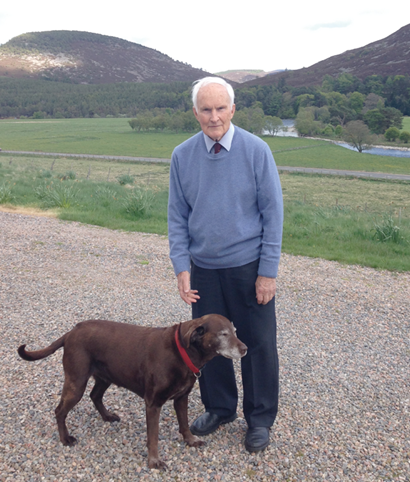 I’d heard that he might be the oldest ENT surgeon alive, but after some thought, he dispels this rumour. He isn’t even the oldest ENT surgeon in the Gibb family! Many surgeons of his generation whom he knew well have passed away; he names Howard and Bill House (1908-2003 and 1923-2012, Los Angeles), Jack Hough (1920-2012, Oklahoma City), and Harold Schuknecht (1917-1996, Boston). But his sister Muriel Gibb, a retired ENT surgeon from Ayr, is alive and well at the age of 105. 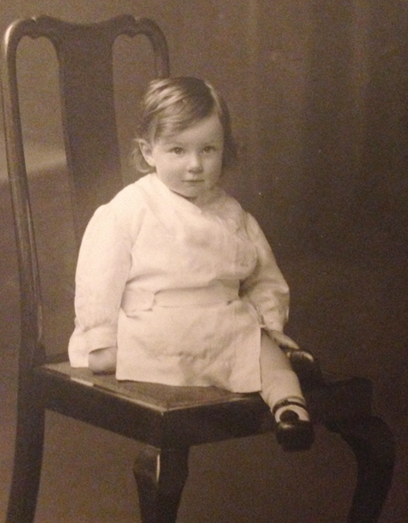 Born in 1919, Alan Gibb comes from a medical family with an impressive heritage. “My father and mother were both GPs. My mother was the first female GP in Aberdeen, there’s a plaque up to her memory in Chapel Street in Aberdeen.” 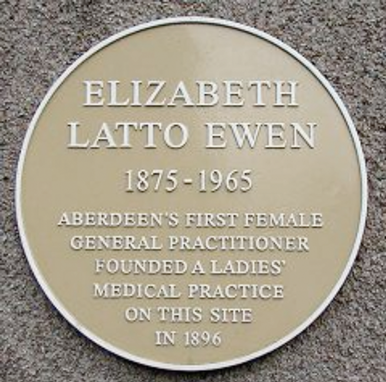 Graduating from Aberdeen Medical School in 1941, he reports that “life as a student was probably much more carefree than it is now; there wasn’t a limit to the time you took to get your degree. I remember my anatomy days, dissecting the human body, I suppose they do the same today, but we spent hours and hours every day in the dissecting room in second year. The rest of it, well, you hadn’t so much to learn in those days. A lot of things we know now weren’t really understood then. But the work we did as house doctors was very hard, I would get up and test urine before breakfast; we’d finish at about 8 then be on call all night, so it was quite tough.”

“The work we did as house doctors was very hard, I would get up and test urine before breakfast; we’d finish at about 8 then be on call all night, so it was quite tough.”

He names a number of heroes and mentors from his time as an ENT trainee. “Sir Harold Gillies (1882-1960) was quite a hero of mine in my early days, he was a great thinker. I was attached to maxfax in Stracathro [Emergency Medical Services Hospital] during the war, and Gillies really put a lot of thought into everything, he was a skilled surgeon. Robert Sharpe Venters in Carlisle was an enthusiast, ENT was fun with him, and I think I retained that afterwards. He’d been to Vienna and he taught me ethmoidectomy long before FESS, with a head mirror and no magnification, but we defined the frontal sinus duct and the sphenoid sinus ostium each time. 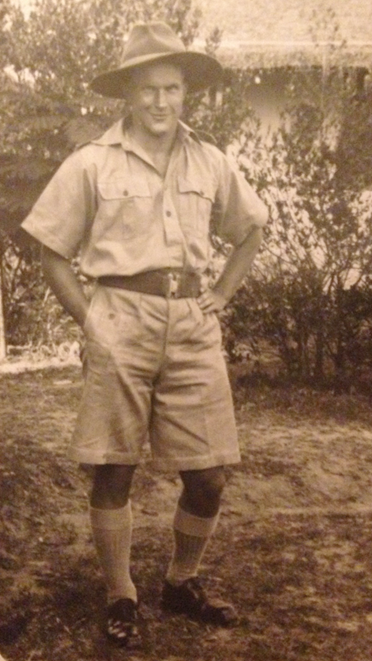 Alexis Tumarkin (1900-1990, Liverpool) was a remarkably clever and talented surgeon who did mastoid surgery subcortically via the posterior canal wall, and often had very small cavities. We didn’t use a binocular microscope, just a headlight. There was no drill at that time, we used a hammer and gouge, and Tumarkin sharpened his gouges after every operation. The drill was a great improvement when we got one. But Jack Hough in Oklahoma, he was probably my biggest hero and influence.”

“I was most interested in the ear, and during my career, nasal surgery never changed until FESS; laryngology developed a bit, but ear surgery just really opened up.” Gibb describes meeting Rosen [Samuel Rosen (1897-1981, New York)] in the early 1950s and learning about surgery for otosclerosis as it developed. He made a trip to the USA in 1962, a four-day journey on the Queen Mary, during which he visited otological centres of excellence including New York, Las Vegas, Memphis, House Ear Institute in Los Angeles, Hough Clinic in Oklahoma, and Schuknecht in Boston. 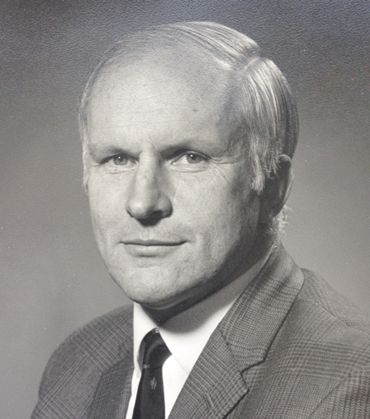 Travel features prominently in Gibb’s recollections. In 1954, he founded the ORL Club with Douglas Ranger (1916-1997), John Martin and Tom Wilmot (1920-2011). “We arrange visits overseas every other year. We’re going to Milan this year to see Claudio Albizzati.”

He also keeps up with his CPD, attending one meeting of the Scottish Otolaryngological Society (of which he was President 1979-80) per year, and one meeting of the RSM Section of Otology (of which he was President 1975-76). His favourite is the November meeting for the Presidential Address, but he’s also enjoys December meetings, attending the British Society of the History of ENT meeting during the same visit.

Gibb was Head of the Department of Otolaryngology in Dundee until his retirement in 1984, and developed a passion for teaching which led him to spend eight years in the Far East following retirement.

“I’ve always had a great interest in teaching. I did some research with GPs in Dundee and gave lectures to GPs that came for refresher courses. I was responsible for spreading the OSCE in the Far East. I spent a lot of time researching teaching, and I always emphasised that you have to let students do things, not just sit through lectures. We introduced OSCEs to Singapore and Hong Kong, and the Australian board consulted us before they introduced OSCEs to their exams.” Gibb’s contributions to medical education are recognised annually, with ‘The Alan Gibb Prize in ENT Surgery’ for undergraduates in Hong Kong, and ‘The Alan Gibb Dissection Prize’ for the temporal bone course in Dundee. 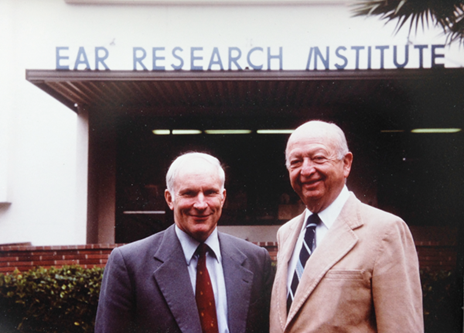 It’s no secret that Gibb is a lover of golf, and that he celebrated his 90th birthday by playing 90 holes over the Balmoral Course. I ask whether he still plays. He chuckles, “Oh, I was a good golfer (he had a handicap of three) but I’m not now! I can’t even walk the course; I need a buggy. I’ve been doing some golf tuition for the past few years… but, yes, I’ve had a great life on the golf course.”

Gibb’s achievements extend well beyond the scope of this piece. We could probably dedicate an entire issue to his remarkable record in the fields of academia, medical education, leadership and innovation, but it’s his humility and philosophy, which for me, make him stand out.

“We’ve inspired a generation, and that would definitely be one of my highlights.”

His eyes brighten when I ask about his career highlights. His first is the honour of having inspired others, many of whom have gone on to become well known themselves. “We’ve inspired a generation, and that would definitely be one of my highlights.”

“I loved operating,” he enthuses, “and I’d still be delighted to do a mastoid. I couldn’t do a stapes, I wouldn’t be steady enough, but I’d do a tympanoplasty quite happily.” As he pours tea into my china cup, he has a very mild, fine tremor. I suspect he’d still be capable of an excellent tympanoplasty.

Other highlights were his research into tympanosclerosis, and of course, his passion for travel. “All my travel, that was definitely a highlight.”

Any regrets? “Not many, no. I think we got the NHS at its best, and I think we lived in the best time of all in otology, the most exciting time.”

Finally, I ask whether he has any advice or wisdom for aspiring ENT surgeons of today. “Oh, it’s been fun,” he tells me, “but you must always keep up the work ethic. You should always be approachable, and you must never make anyone scared or afraid of you. The most important thing is to keep a happy department.” Valuable wisdom indeed.

“I worked until I was 78, and would have gone on for longer, but I wanted to see the Scottish hills.” Gibb tells me. The view from his sunroom is spectacular, and he’s definitely deserved it.