In conversation with Duncan Boak, founder of Fifth Sense
Interviewed by San Sunkaraneni

Our sense of smell is something we take for granted – but imagine if it wasn’t there… We see many patients who struggle with anosmia, but perhaps don’t always appreciate how much of an effect it has on their quality of life. Duncan Boak, Founder and Chair of Fifth Sense, the charity for people with smell and taste disorders, speaks to Consultant Rhinologist and ENT surgeon San Sunkaraneni about why he set the charity up and what it is like living with anosmia.

How did you become interested in smell and taste disorders?

The starting point was me losing my sense of smell through a head injury in 2005. At the time I’d never heard of this happening to anyone before and my doctor told me it was really rare, that nothing was known about the sense of smell and that nothing could be done. I just accepted that, but it changed my experience of life in all sorts of ways. I’d never paid any attention to my sense of smell, had never been taught anything about it, I didn’t even know it could be lost. It wasn’t until 2011 that I read a book about another person’s experience of smell loss and started to fully understand for the first time how it had affected me and that I wasn’t one in a million. It was a bit of a ‘road to Damascus’ moment to say the least.

What is Fifth Sense and why did you decide to set it up?

Fifth Sense is the charity for people affected by smell and taste disorders. We work to provide support, advice and a signpost to potential diagnosis and treatment to patients and raise awareness of the importance of smell and taste and the impact of such conditions. In the longer term, money that we raise will fund research into better understanding and treatment of chemosensory disorders.

I set up Fifth Sense to fulfill what I realised, after starting to learn about olfactory loss for the first time, was a huge unmet need. Smell and taste disorders can cause significant quality of life issues for those affected and patients have been neglected and underrepresented for far too long.

How much interest has there been from the public, media and the medical profession in problems of olfactory dysfunction?

There has been an incredible amount of interest from the media, particularly, which has enabled patients to find out about us and has in turn generated interest from individuals and organisations interested in working with us and supporting us. The attitudes of the wider public and the medical profession will take longer to change. The fact is that smell and taste aren’t seen as being that important, and the sense of smell, particularly, affects us on a complex emotional and psychological level that we aren’t aware of when we do have it. It is difficult to imagine what it might be like to lose one or both of these senses until it happens to you.

How do you think that industry might help with improving the lives of patients with smell and taste disorders?

I have seen the commercial world as being crucial to our work from day one. Harnessing the knowledge and expertise within relevant industries, not to mention the potential for funding, can, I think, provide great benefit in the longer-term. For example, we’re currently working with a commercial partner, FlavorActiV, on a project called ‘Taste, Train, Enjoy’ to help people who have suffered olfactory loss better understand and utilise any residual tasting ability and hopefully improve their enjoyment of food and drink. It’s still early days but I’m really excited about the possibilities. 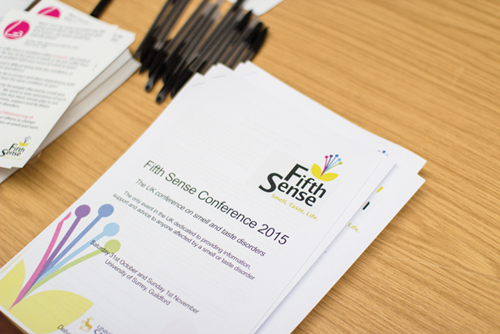 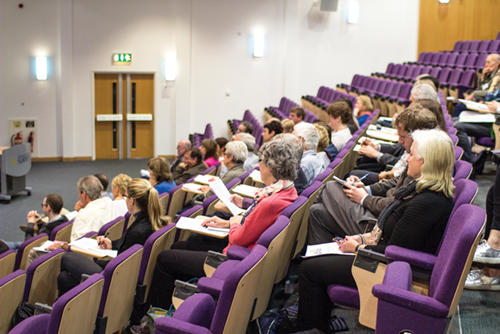 Photos from the Fifth Sense 2015 Conference.

What more could the NHS do to help with the management of these patients?

A good starting point would be recognition that smell and taste disorders cause significant issues for many people and that patients should be treated with respect and sympathy rather than shrugged off, which is sadly all too common at present. Then we need more clinicians – particularly in the ENT profession – to train and develop expertise in this area. I’m always keen to hear from anyone in ENT, whether consultants or trainees, who wish to learn more about how these conditions affect patients.

What three things have you learnt from being involved with Fifth Sense?

Where do I start!? That’s probably the toughest question so far…

I’m continuing to learn a huge amount about the senses of smell and taste and how they affect our lives, which I’ve been able to pass on to others through Fifth Sense. From a personal perspective I’ve learned that turning my own negative experience of sensory loss into something that is helping others is hugely rewarding and empowering. I’ve also learned quite a bit about rhinology from you and others, although I’m not considering a career change any time soon – I’ll leave the polypectomies to you.

You have recently started collaborating with other similar organisations overseas. Where do you see the next step in the evolution of Fifth Sense?

Yes, we are working in partnership with the University of Florida Center for Smell and Taste to deliver an event in the USA in February 2017 called SmellTaste2017. This is focused on providing information and support to people affected by a smell or taste disorder and will follow a similar format to the successful UK conferences we have delivered over the past few years. This is a great opportunity to look forward to but the next key step for Fifth Sense is getting registered charity status which will open a lot of doors.

How can ENT surgeons help with research into smell and taste disorders?

Going back to my earlier point, I’d like to see more ENT consultants take a deeper interest in smell and taste disorders and undertake training to help them better understand what can be done. Out of that will, I hope, come the desire to undertake further clinical research. It’s such a fascinating area and there’s so much still to learn.

With also having a ‘day job’, how do you find the time to devote to running an organisation such as Fifth Sense, and what does Duncan Boak do in whatever spare time he has to himself?

Drive and passion go a long way but I’m pretty organised too, which certainly helps! I’m fortunate to have a team of brilliant volunteers who help me run Fifth Sense and of course there’s my fellow trustees who bring a range of skills and experiences to the table. Time to myself – having spent many years making music before I channeled my creative energies into Fifth Sense I do still pick up the guitar (occasionally). I also love cooking. Since starting Fifth Sense I’ve learned how to make use of other sensory elements such as texture and basic tastes when cooking and enjoying food; it’s important to focus on what you can still perceive rather than thinking about what you are missing out on. 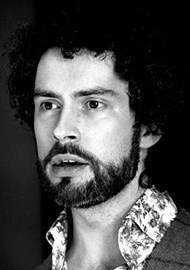 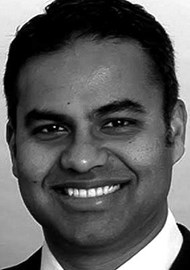