The barber-surgeon of Avebury
By Chris Potter

On a stroll through Neolithic Britain, Seville oranges on a quay in Dundee, marmalade and 14th century coins, Chris Potter unravels the story of a man (a surgeon?) seemingly crushed by a falling 13-tonne stone. But things are not quite as clear as they initially appear…

On 7 January 1649 the scholar, biographer and polymath, John Aubrey, was out hunting with friends, galloping westwards across Fyfield Down along the old London-Bath road. He later described events in his hefty, posthumously-published Monumenta Britanicca:

”The chase led us at length through the village of Avebury, into the closes there: where I was wonderfully surprised at the sight of those vast stones: of which I had never heard before… I observed in the enclosures some segments of rude circles, made with these stones; whence I concluded, they had been in the old time complete.”

Aubrey had ‘discovered’ one of the principal ceremonial sites of Neolithic Britain, famously declaring that it “does as much exceed in greatness the so renowned Stoneheng (sic) as a cathedral doeth a parish church.” Of course, the villagers of Avebury regarded this discovery much as the indigenous population of Australia and North America regarded James Cook and Christopher Columbus respectively; with a bemused contempt and bafflement. Indeed, the inhabitants of the village within the circle had spent much of the preceding centuries dismantling the monument for building materials and reburying the sacrilegious pagan megaliths. It is somewhat surprising that none of the passengers on the main route from London to Bath had ever noticed the largest megalithic stone circle in the world from their carriage window; after all, it had only been there about 4500 years. 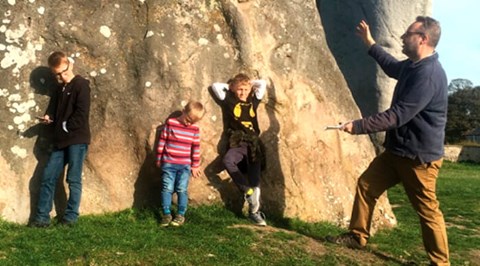 Figure 1. The author beguiles his awestruck offspring with the
fascinating tale of the Barber-Surgeon’s Stone, Avebury 2019.

Aubrey’s brilliant survey of the stones was a masterpiece of Antiquarian draughtsmanship, but it seems a few errors crept in. His stone 38 (see Figure 1) is shown still standing, whereas it would appear to have fallen three centuries before. We know this from an astonishing discovery made during excavation of the fallen stone in 1938 by a team led by Alexander Keiller.

“There seemed little doubt that this was the equipment of an itinerant medieval barber-surgeon, presumably visiting Avebury for a religious festival of some sort to ply his trade”

The story begins in 1797, when one James Keiller discovered a large cargo of Seville oranges stranded on the quay in Dundee. Until then, marmalade had been a niche luxury product of preserved quince, but Keiller tweaked the family recipe with his wholesale orange purchase and began large-scale manufacture of the product. Within a couple of generations, the family had amassed a significant fortune, which was inherited by Alexander in 1910 and frittered away in a few short decades.

Alexander Keiller was an interesting character whose correspondence was burned soon after his death due to its scandalous nature. He married on four occasions and entertained a succession of mistresses, with an alarming penchant for locking them semi-clad in a laundry basket and attacking them with a furled umbrella [1]. He was president of the Ski Club of Great Britain and briefly owned an unsuccessful car manufacturing company, whose most novel design feature was a fold-down bed on the passenger side. In the 1920s he became fascinated by archaeology and used his enormous wealth to purchase land around ancient monuments to aid their preservation. In 1935 he bought Avebury Manor and embarked upon a hugely ambitious project to re-erect the fallen stones and restore the Neolithic site to its former glory. 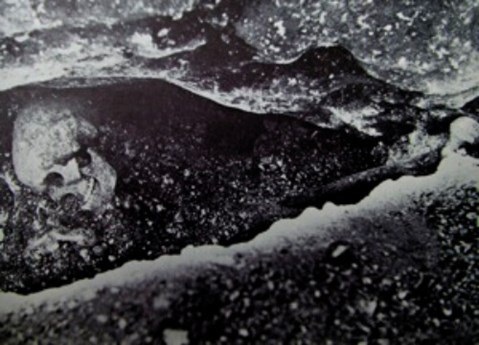 Figure 2. After seven centuries under stone 38, the ‘barber surgeon’ emerges in 1938.

On Wednesday 29 June 1938 the work had reached the burial pit of stone 38 and, as the huge sarsen was excavated, an articulated skeleton was found wedged tightly to an unfinished corner of the pit (see Figure 2). It was rapidly surmised that this was a young man employed in digging the adjacent part of the trench when the 13-tonne megalith had prematurely toppled upon him. Under his head was found a fragment of 12th century pottery and adjacent to the left femur were three silver coins stuck together in the remains of a leather pouch. Distally beside the leg was a pair of rusted scissors and what appeared to be a lancet. There seemed little doubt that this was the equipment of an itinerant medieval barber-surgeon, presumably visiting Avebury for a religious festival of some sort to ply his trade. He seems to have been roped into helping to topple a stone before being (faintly comically) crushed under its slow-moving mass. The combination of willingness to get one’s hands dirty with a rather sluggish nature may suggest to some a likely chosen speciality of orthopaedics.

After five peaceful centuries under his megalith (to this day known as the Barber-Surgeon’s Stone) his bones were removed to the Royal College of Surgeons, which was of course flattened by a Nazi incendiary bomb just two years later. One might start to question whether this rather hapless individual was in some way accursed.

That is how the story was presented to the public for many years: a medieval barber-surgeon hubristically crushed whilst attempting to bury a pagan monolith, his bones lost to posterity during the Blitz. Then, in 1996, the Natural History Museum catalogued a number of rediscovered osteology specimens in their basement, and it became apparent that several of them had originally been in the RCS collection and presumably moved prior to the Blitz. Mike Pitts, then-curator of the Keiller Museum in Avebury, soon received a letter from the College informing him of the presence of a 14th century skeleton from Avebury, donated in 1938 by Alexander Keiller himself [2].

The original anatomical report by Dr AJE Cave (assistant curator of the Hunterian museum) stated the cause of death as crush injury, noting a comminuted fracture of the sacrum and both innominate bones, with concomitant fractures of the spinous processes of C5 and 6. Cave had originally stated that there had been no other obvious injuries, and Keiller had written to correct him that there were two very obvious healed linear injuries to the right temporo-parietal region. Re-examination of the bones for a Channel 4 special by osteoarchaeologist, Anthea Boylston, was rather illuminating [3]. She found very little evidence of the sort of massive crush injuries one might expect from a 13-tonne megalith, with only a fracture to the left iliac crest. The other bony injuries seeming to be post-mortem and due to settling of the soil. She also noted the linear parietal injuries, most likely due to a sword wound which was well healed and long pre-mortem. 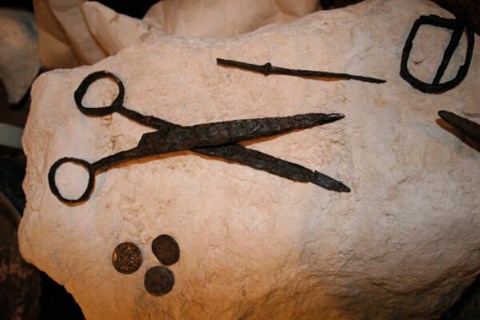 Examination of the other possessions has also cast doubt on the barber-surgeon theory. The two silver pennies depicting Edward I (1272-1307) appeared to have been minted in Canterbury between 1300-07, and the third silver penny was minted in Toul (Louvaine) in 1310-15; a rare copy of an Edwardian coin. This paltry sum does not represent a hoard of valuables, but more likely a working-man’s change purse. Similarly, his belt buckle was simple iron rather than the brass or gilt bronze one might expect from a wealthy artisan. The scissors (see Figure 3) do not seem particularly useful for any sort of surgery, the blades taking up 65% of the total length of 15.2cm, whereas typical surgical scissors are much shorter, with a blade ratio of 20-30% [4] (tonsillectomy scissors come in at 23%). A role in cutting cloth or leather would seem more appropriate for these clumsy shears than the earliest noted-medieval use of scissors in circumcision(!). The ‘surgical lancet’ also appears to be a bodkin for punching holes in leather, and not very suited to any surgical purpose.

“A role in cutting cloth or leather would seem more appropriate for these clumsy shears than the earliest noted-medieval use of scissors in circumcision(!)”

The most likely scenario thus seems to be that of a travelling tailor coming to the small agricultural community of Avebury at festival-time to measure up some villagers, and dying from some unspecified cause. As a stranger to the parish, the villagers seem to have pragmatically tossed his corpse into the burial pit of a freshly-toppled stone, where a shift in the soil on backfilling caused his fractured pelvis. No doubt it was assumed he would rest there peacefully until judgement day, undisturbed by marmalade magnates, the Luftwaffe and academic osteoarchaeologists.