Where ignorance is bliss, 'tis folly to be wise
By Chris Potter

I’m not sure about you, but I seem to exist in a sea of incompetence and ignorance, constantly surrounded by amateurish chumps and feckless underachievers. Now, a lesser man may be daunted by this outlook, but I see it as my purpose in life to personally confront these issues and tirelessly educate sufferers as to their areas of deficiency.

Despite my selfless dedication, a surprising number of colleagues fail to appreciate my efforts. Indeed, some even appear rather agitated by my forensic dissection of their personal inadequacies and bold exhortations to self-improvement. Rather than being discouraged by this attitude, I stand firm in the knowledge that the weight of scientific evidence lies (for once in my clinical life) firmly behind me. You see, it transpires that the ignorant all too often are completely oblivious to their own shortcomings, and thus require public-spirited characters like my good self to point it out to them. This phenomenon even has a name: (pause for fanfare) The Dunning-Kruger effect.

Repeated surveys have demonstrated that something like 50% of respondents believe the sun rotates around the earth, 21% believe the greenhouse effect is caused by a hole in the Earth’s atmosphere, and 52% of our American cousins deny our descent from hominid precursors. Economists would argue that much of this ignorance is actually rational, and gross scientific illiteracy will have little impact on our everyday happiness and efficacy as human beings. However, astonishing numbers of people remain blissfully unaware of fundamental truths about their own bodies. Around 60% of men with a fracture injury of the hand or foot will have completely forgotten about it to the extent of complete denial within 15 years [1]. Somewhat surprisingly, 36% of circumcised men attending an STD clinic were quite certain they were uncircumcised [2]. Just read that sentence again and remember those 36% are free to vote and bear arms. Even more bizarrely, a recent poll suggested that 4% of Americans believed themselves to have been decapitated at some time in the past.

“Based on my current skill-set, I personally think I could make a decent fist of managing the England football team to World Cup glory.”

Even the world’s greatest experts in a particular field can all be wrong simultaneously. Every single professional economist of note completely failed to notice the 2008 sub-prime mortgage crisis mushrooming into a global meltdown. In 1999 as the Human Genome Project neared completion, the leading gene-sequencing company at the time (Incyte) estimated a total of 153,000 human genes in the sequence, bearing in mind E.Coli has around 5000 and the soybean plant 50,000. The European Bioinformatics Institute ran an informal sweepstake and of the 453 estimates, the average was 66,050 and the lowest entry 25,747. The best recent estimate is 19-20,000, almost an order of magnitude less than the most reliable source at the time of the project (see Figure 1). 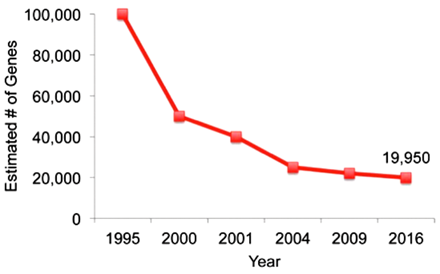 Of course, the crucial point of ignorance is that it remains invisible to the sufferer who is blissfully unaware of gaps in their knowledge. We are dealing with the ‘unknown unknown’ – a concept well known in cognitive sciences and strategic planning circles, lucidly and famously explained by Donald Rumsfeld in February 2002. In response, the diehard pedants of the Plain English Campaign awarded him their Foot in Mouth award, neatly and ironically exposing their own manifest ignorance of this highly valuable idea.

Poor performers in many social and intellectual endeavours thus remain largely unaware of just how deficient their expertise is, and generally rate their own performance delusionally highly. If you have ever been involved in surgical training (or have a cavalier departmental colleague), you may well have some degree of familiarity with this phenomenon. There is a double burden of ignorance – sufferers make repeated mistakes, but do not have the capability to recognise these mistakes and correct them, and sail through their lives happily oblivious to their expanding trail of mayhem.

“During a difficult rhinoplasty, one sometimes finds oneself racked with self-doubt and yearning for the days as a trainee, merrily bashing away with the mallet certain of your negligible abilities to salvage the situation.”

Dunning and Kruger found that in a variety of tasks, the bottom-performing quartile consistently overrated themselves to the extent that they saw their performance as above average. The top quartile were rather more sanguine about the whole thing, and often slightly underestimated their performance [4]. These findings do not hold for all knowledge domains, and it seems the ignoramus must have a critical mass of knowledge in order to be delusionally self-confident. I have no pretensions about my own abilities to translate Linear B, play centre-field for the Toronto Blue-Jays or carry out a successful stapedotomy. However, based on my current skill-set, I personally think I could make a decent fist of managing the England football team to World Cup glory, reorganising the NHS into a cost-effective healthcare-provision system, and writing an occasional whimsical column for an informative speciality-specific magazine.

It would appear self-evident that the best way to help people to recognise their own incompetence is to educate them out of it so the scales fall from their eyes and they see the errors of their ways. People who are terrible at logic problems (and think they are just great at them) forced to undergo a crash-course in remedial logic problems show a dramatic improvement in performance but a paradoxical and sudden loss of confidence, rating themselves worse than before they became competent [5]. Similarly, during a difficult rhinoplasty, one sometimes finds oneself racked with self-doubt and yearning for the days as a trainee, merrily bashing away with the mallet certain of your negligible abilities to salvage the situation.

The key to successful acquisition of expertise would appear to be reflective practice accompanied by near-instant and relevant feedback. A sympathetic mentor constantly whispering in one’s ear combined with diligent follow-up and constant audit of results, regular meetings with peers and a critical familiarity with up-to-date literature will protect us from the bliss of ignorance. 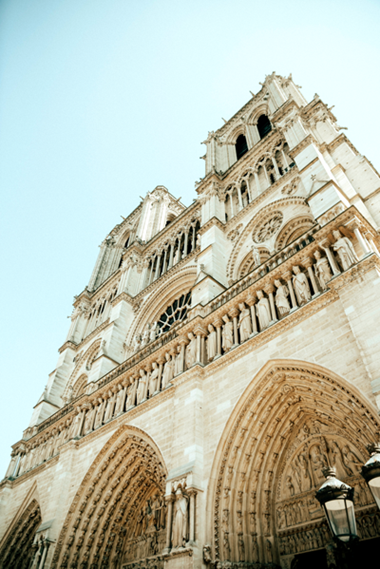 However, in my opinion the greatest achievements of the medieval mind were the Gothic cathedrals of Western Europe, unparalleled soaring masterpieces of glass and stone towering majestically above the grimy hovels of their architects. The Great Pyramid of Cheops was the tallest building on earth for four millennia until the completion of the central spire of Lincoln Cathedral in 1311. It fell down in a storm in 1549. The vaulting of the choir of Beauvais cathedral was possibly the most awe-inspiring sight in Europe until it collapsed in 1284. The architects and builders of the time were completely ignorant of the fundamentals of material science, structural engineering and applied mechanics. It was this ignorance that allowed them to produce impossibly beautiful symphonies in stone with no knowledge of the inevitability of failure. I would argue that the human tendency to grossly overestimate one’s capabilities may well lead to disaster, but may also enable a modest talent to stubbornly persevere against all the contrary evidence and achieve the divine. Go stand in the South transept at Chartres and try to disagree (see Figure 2).

'Where ignorance is bliss, tis folly to be wise'
(Gray T, Ode on a Distant Prospect of Eton College, 1742)

1. Johnell O, Redlund-Johnell I, Sernbo I. Remembering fractures: fracture registration and proband recall in southern Sweden. J Epidemiol Community Health 1994;48:489-90.
2. Lilienfeld AM, Graham S. Validity of determining circumcision status by questionnaire as related to epidemiological studies of cancer of the cervix. Journal of the National Cancer Institute 1958;21(4):713-20.
3. Pertea M and Salzberg SL. Between a chicken and a grape: estimating the number of human genes. Genome Biology 2010;11(5):206.
4. Dunning D. The dunning-kruger effect. On being ignorant of one’s own ignorance. Advances in Experimental Social Psychology 2011;44:247-96.
5. Kruger J, Dunning D. Unskilled and Unaware of It: How Difficulties in Recognizing One’s Own Incompetence Lead to Inflated Self-Assessments. Journal of Personality and Social Psychology. American Psychological Association 1999;77(6):1121-34.