Chia-Hung Li, a Medical Device PhD student from University College London’s (UCL) Institute of Healthcare Engineering, is currently leading a PhD project to develop a clinical device to monitor nasal blockage. Jo Rimmer spoke to him about what he is doing, and how it will hopefully help clinicians and their patients in the future.

I graduated from City University London (which is now part of the University of London) in 2014 with a first class in BEng Biomedical Engineering. The main focus of my current course is on the electronics and diagnostics side of the subject. I started my MRes (a master’s degree as part of the PhD) in Medical Technology Entrepreneurship last year and received a distinction. The focus of our programme is to combine both engineering and business in the context of developing medical devices that will be used by clinicians and be successful commercially.

In January 2015 I secured sponsorship from leading medical device design and manufacturing company ITL who, as well as providing financial support, will mentor me and inject a commercial focus into the PhD programme. I have been receiving support from ITL’s New Product Development Manager, Steve Hope, and R&D Manager Ian McCutcheon, who have been the industrial supervisors for the project.

My project team is headed up by Dr Terence Leung, Senior Lecturer in Biomedical Optics at UCL’s Department of Medical Physics and Biomedical Engineering, and Mr Peter Andrews, Ear Nose and Throat Surgeon and Consultant Rhinologist from the Royal National Throat, Nose and Ear Hospital and the UCL Ear Institute.

How does / will the device work?

As the development is still in its very early stage, we are not entirely certain as to which aspect of the device will be the basis of our eventual intellectual property (for example, the sensor design, or the signal processing algorithm). As a result, we have to keep a lot of the aspects of our project as confidential as possible.

What we can say is that the device will measure signals from the subject during natural breathing, and signal processing will be implemented to calculate various numerical indices which clinicians can use to assist in diagnosing patients with nasal blockage.

The clinical device you are developing will monitor nasal blockage – how have you researched this area?

On the academic side of the project, we carried out literature reviews on the various objective methods that are being used to assess nasal obstructions. These included well established methods that are already used in the clinics but also many concepts that are still in their very early stages of development.

We unearthed many new concepts that are being used only at the research level; an example being a device called the Odiosoft-Rhino, where the patient breathes out onto a microphone and the sound is analysed to detect the presence of nasal obstruction.

We have an experimental set-up that is somewhat similar to this but also very different at the same time. It allows us to acquire and analyse signals from the patients when they breathe naturally. This set-up is being used in an ongoing clinical study at the Royal National Throat, Nose and Ear Hospital, where we take measurements from both patients and control subjects.

Outside the technical academic research, we also carried out a clinical survey at the 2015 British Academic Conference on Otolaryngology in Liverpool. Our survey asked the clinicians what methods they used in their clinics to diagnose nasal obstructions. Our results indicated that most of them do not use objective methods where physical quantities are measured. The clinicians cited many different reasons for this, mainly related to the shortcomings of the existing methods. The survey also informed us of the need to develop a new objective method to assess nasal obstruction. 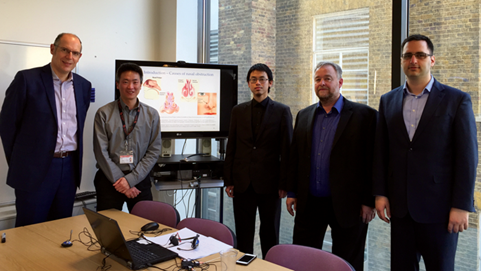 While I knew that I wanted to continue my studies I did not have a specific interest in ENT at the time of choosing my PhD course. I looked at several potential projects before selecting this one and had contacted each of their respective supervisors. What initially attracted me to this particular project was the blend of activities relating to electronics and programming, combined with a significant element of entrepreneurship and business.

It is fine to come up with good theoretical ideas during research but for me, these ideas aren’t going to get any further than the bench unless the target market genuinely has a need for them and would be willing to pay for the benefits a device provides.

What clinical applications will it have?

The device has two applications. First, it will provide an objective qualification on the extent of nasal blockage. This follows the same principle as the other objective methods: smaller measured or calculated indices from the signal mean that there is less airflow into or out of the nose and, hence, an obstruction.

The second application is to be able to analyse the signal and generate another set of indices which the clinicians can use to predict the presence of certain nasal conditions that caused the nasal blockage. For example, a high number of a particular index can indicate that the patient is likely to have nasal septal deviation; while an abnormally low value of another index can mean that the patient may have septal perforation.

How do you see it improving patient care?

Our aim is not to replace the conventional methods of clinical diagnosis (like physical examinations and endoscopy) but rather to provide clinicians with some objective values to reinforce their diagnosis.

This is important as there is a growing need for the clinicians to provide more objective, quantifiable evidence (such as a physical quantity that is measured) in order to justify, say, commissioning surgery for the patient; as opposed to simply using physical examinations, and patient symptom questionnaires, which are subjective. Currently, this is done by other well-known objective methods such as the peak nasal inspiratory flow meter, acoustic rhinometers, and rhinomanometers.

However, they all have disadvantages that make them unideal. The peak nasal inspiratory flow meter is inexpensive and very easy to use but can only tell how blocked the nose is, without any indication of the nature of the blockage (e.g. whether the blockage is at the anterior or posterior region of the nose) or the nasal condition that caused it.

Acoustic rhinometers and rhinomanometers provide much more information but they are costly and complicated; in fact they are very rarely used by the clinicians.

Our aforementioned clinical survey found that only a very small proportion of the clinicians surveyed used those two methods, and the results of another similar survey done in America a few years earlier showed similar results.

There are also shortcomings that are common across all three methods, such as the fact that none of them can assess the patient during natural breathing, making the results inaccurate.

Our device will address these issues (such as being able to take measurements from the patients while they’re breathing naturally) and thus provide a suitable, cost-effective and objective method.

If unlimited technology was available, what medical device would you love to design and why?

Whilst I am interested in my own PhD project and intend to continue working on it as a post-doctoral researcher, I am also interested in other fields as well. I have an interest in women’s rights issues, mainly sexual abuse and relationship issues. I would like to work on medical devices that are somehow related to helping in these issues. An example of such a device is a medical imaging device for smartphones developed by a company called MobileODT which can be used for forensic purposes in the case of rape victims.

Another good example would be looking at imaging of the brain to monitor post-traumatic stress disorders, which are commonly suffered by victims of sexual abuse. I think the latter is what I’ll be most interested in with regards to this field as it helps with the rehabilitation of the victims and brain imaging is something done by many members of my department at UCL so I can ask them about this topic. 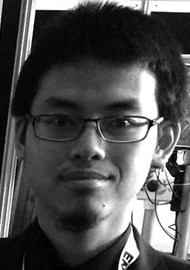 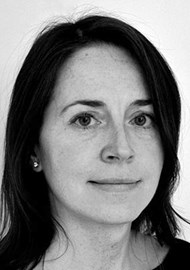