Should human beings sleep in the prone position?
By Armin Bidarian Moniri

Are we poised for a ‘sleep prone’ campaign to reduce nocturnal apnoeas? Prof Armin Moniri presents a fascinating account of how sleeping position can affect obstructive sleep apnoea.

Inspired by sleeping position of other mammals, a new mattress and pillow set, restme®, was developed and scientifically tested at the Sahlgrenska University Hospital in Sweden. restme® enables comfortable prone and lateral positioning during sleep and improves the respiratory parameters in patients with OSA, independent of severity of disease.

Snoring is caused by the narrowing of the upper airways. Obstructive sleep apnoea (OSA) is characterised by recurrent episodes of upper airway collapse, which cause a reduction (hypopnoea) or cessation (apnoea) of breathing during sleep. Approximately 50% of the population may snore from time to time and OSA is estimated to affect up to 20% of the population. Continuous positive airway pressure (CPAP) and oral appliances (OA) remain as main treatment options for these conditions [1]. However, limitations in compliance and efficiency leave many patients untreated. The high prevalence and the comorbidities related to these conditions raise an important need for new therapeutic approaches.

restme®- a new treatment for OSA

Most recent studies on OSA have focused on a potential airway abnormality causing a weakness that results in repetitive airway collapses during sleep. Consequently, the treatment options are based on the correction of such abnormalities. In a PhD thesis from the Sahlgrenska University Hospital, University of Gothenburg, Sweden, [2] an interesting question was raised: ‘Why is the human being one of the few mammals suffering from obstructive sleep apnoea?’ There is indeed a large diversity in upper airway anatomy in mammals, however, the most astonishing difference seems to be the sleep position. While most mammals sleep either in the prone or the lateral positions, human beings have adapted to a supine sleep position mainly due to the rectangular bed configuration that has been present in the history of mankind since the Stone Age.

“Several studies emphasise the deteriorating effect of the supine position on the severity of OSA.”

Several studies emphasise the deteriorating effect of the supine position on the severity of OSA. Previous positional therapies are based on the famous ‘tennis ball method’ and have had limited impact on the treatment of OSA, mostly due to poor compliance. These methods aim to make it uncomfortable to sleep in the supine position, thus causing a sleep disturbance, forcing the patient into the lateral position. No previous study had explored the therapeutic effect of the prone position on severity of disease in patients with OSA (Figure 1). 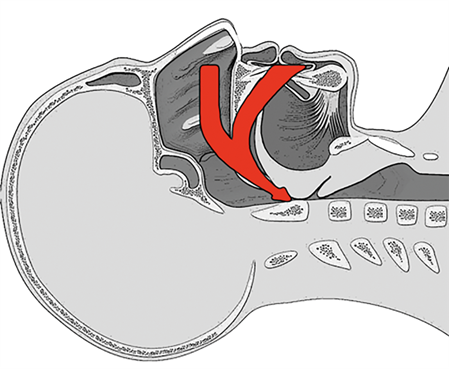 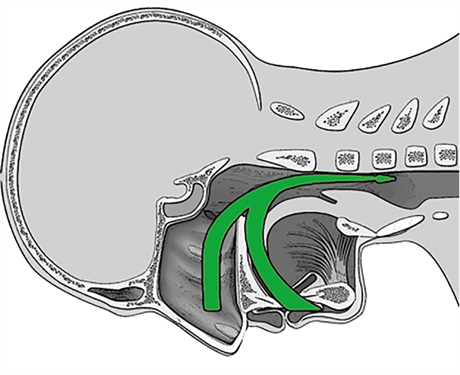 Figure 1. The hypothetical effect of the supine vs. the prone head position on the airway patency.

During the years 2008-14, the Sahlgrenska research team tested more than 50 different prototypes in order to develop a new mattress and pillow permitting comfortable lateral and prone positioning of the head and body during sleep [3,4].

The treatment consists of a T-shaped pillow, enabling cheek and forehead support with a well-aerated space for breathing, and a mattress for comfortable and stable positioning of the body (Figure 2). The pillow allows for prone positioning of the head with the nose mostly perpendicular to the underlying surface, along with anatomical angles in the shoulders and elbows achieved by the mattress. The material and the design of the mattress and pillow, along with the gap between the two parts, allows comfortable lateral positioning with the shoulder placed between the mattress and pillow. Significant pressure reduction is achieved, along with ergonomic position of the vertebral column, as compared to a normal bed.

restme® is placed upon a normal mattress and, therefore is compatible with the existing bed at home. The temperature-sensitive memory foam moulds to the head and body shape, which increases the comfort and assists in maintaining the desired position during the night.

Volunteers with mild to severe OSA, with a mean apnoea-hypopnoea index (AHI) of 26 (min: 6; max: 93) and mean oxygen desaturation index (ODI) of 22 (min: 6; max: 87) were studied for the observation of the short and the long-term effects. Sleep studies were performed with and without treatment. The total follow-up time was three years.

From the first night, all patients managed to sleep on the new mattress and pillow >4 hours per night with no disruption in the total sleep time. The mean time spent in the supine position was efficiently reduced with a significant increase in the mean prone time. The mean AHI and ODI for the whole night decreased from 26 and 22, to 12 and 10 respectively (p< 0.001) with the mattress and pillow. AHI was 38 in the supine, 16 in the lateral and 6 in the prone position. The patient with the most severe OSA had an AHI of 93 at inclusion and experienced a significant improvement in the respiratory parameters after the first treatment night. 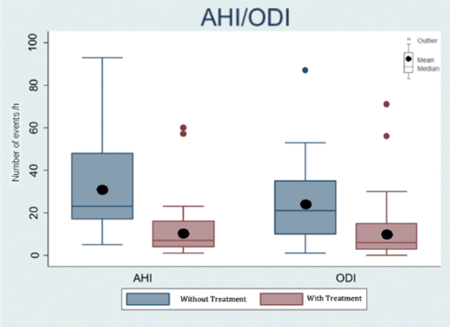 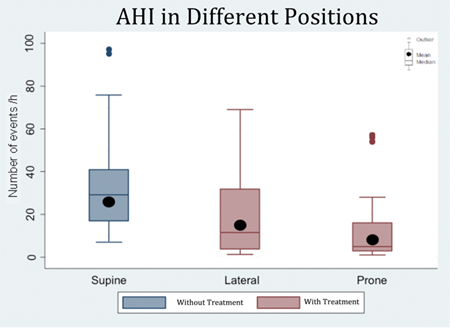 A follow-up time of three years permitted for the evaluation of the compliance and possible side-effects of this new treatment modality. Sleep studies confirm the persistent improvement in the respiratory parameters on the long-term follow-up.

The side-effects included transient discomfort in the back and neck, which were reversible by personal adaptation of the mattress and pillow set. No other side effects were reported.

Long-term compliance with this new treatment for usage >4 hours per night and five of seven nights a week was >90%. Patients report reduced daytime sleepiness with treatment, with excellent satisfaction on usage. One third of the patients included in the study had already tried the current treatment options with CPAP and OA, with unsatisfactory compliance or efficiency. Also these patients adapted well to prone and lateral positioning with restme®.

Previous trials on intubated patients with severe respiratory distress syndrome and acute respiratory failure indicate approximately 50% reduction of mortality when patients are nursed in the prone position compared to the supine position [5]. These findings are not related to OSA, given the fact that the patency in the upper airways is maintained by oro-tracheal intubation. However, improved oxygenation by more advantageous gas exchange in the lungs seems to take place in the prone position as compared to the supine position.

“If the human being would sleep in the prone position, the soft tissue would instead fall forward, hypothetically causing an enlargement of the upper airways in REM-sleep.”

Rapid eye movement (REM) sleep is recognised as an important predisposing factor for the development of OSA, primarily due to the muscular relaxation that occurs in this sleep stage. However it is the gravitation that pulls the soft tissue backwards, which mainly occurs in the supine position. If the human being would sleep in the prone position, the soft tissue would instead fall forward, hypothetically causing an enlargement of the upper airways in REM-sleep. Further studies are needed to evaluate the effect of the prone sleeping position in REM versus non-REM sleep.

restme® reduces the supine time efficiently with an increase in the prone and lateral time during sleep. While the respiratory parameters are improved in the lateral position, prone positioning seems to reverse OSA, regardless of severity of disease. Long-term follow-up reveals excellent compliance and persistent airway patency in OSA patients. To our knowledge, these are the first studies to observe the effect of prone positioning as a treatment for OSA patients. Our findings are suggestive that OSA may be caused by bad sleeping habits and not an airway pathology, which would explain the high prevalence. Human beings should most probably sleep in the prone and lateral positions like other mammals.

Declaration of competing interests: Armin Bidarian Moniri is the patent holder for restme® pillow and mattress for reducing snoring and sleep apnoea.

Armin Bidarian Moniri, the founder of the restme concept, is a Swedish ENT Consultant from the Sahlgrenska University Hospital in Sweden and Guest Professor at the University of Algarve, Portugal. He has two patents for innovative medical treatments: Moniri Otovent - Device for equalisation of the pressure in the middle ear - and restme® - pillow and mattress for reducing snoring and sleep apnoea. 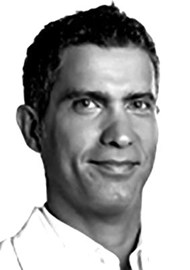