Neurophysiologic tinnitus or subjective tinnitus is typically a sound or a number of sounds that originate from the auditory nervous system. They are unwanted sounds that do not exist in the external environment. They can be heard in one or both ears, the head or indeed some patients describe the sound as around or near to the head. Tinnitus can be idiopathic in nature and is often referred to as a disruption of the neurological auditory pathway. Subjective tinnitus can only be heard by the patient.

Tinnitus may disturb sleep, concentration and have a serious impact on quality of life. According to Dawes [1], Nondahl [2], Hoffman [3] and Davis [4], between 7% and 20% of the general population have subjective tinnitus. For 10% to 15% of the population, and up to one in three older adults, the experience of tinnitus can be chronic [5, 6]. In the USA, Vernon and Sanders [7] suggest that 40 million people have tinnitus; out of the 40 million between five and thirty million have severe, quality of life disruptive tinnitus. Due to the ageing population and increasingly noisy society, the prevalence of subjective tinnitus amongst the general population is expected to increase [5, 8].

Typically tinnitus specialists use a holistic approach and a tool box of interventions to help the patient. Medical professionals and others sometimes advise people that ‘nothing can be done’ that it will ‘never go away’, and they must ‘learn to live with it’. Such advice does not provide assistance. There remains no definitive cure, however interventions do exist and are ever growing. Approaches include hearing aids, sound therapy, tinnitus counselling to help understand the tinnitus, Cognitive Behavioural Therapy (CBT) to help change the way the patients perceive their tinnitus, Tinnitus Retraining Therapy (TRT) which uses both sound therapy and counselling. Other forms of management include self-help, support groups and relaxation techniques such as Tai Chi and Yoga.

Today we introduce an innovative approach to helping tinnitus patients. We interview Caroline Hamilton, Managing Director of The Neuromod Clinic about mutebutton™.

Caroline, it’s great to hear about mutebutton, can you tell us what background evidence generated the idea for mutebutton?

Neuromod Devices was founded by Dr Ross O’Neill in 2010 as a spin-out from Maynooth University, Ireland, to develop innovative neurostimulation technologies for the treatment of unaddressed neurological conditions. mutebutton is a completely new approach to the treatment of tinnitus designed to help the brain to separate the ‘real’ noise from the perceived sounds of tinnitus. With the support of Enterprise Ireland and the Commercialisation Office at Maynooth University, this revolutionary treatment for tinnitus should soon be available to help those who are currently told there is nothing that can be done to help them.

As an illusory condition, subjective tinnitus is believed to arise in response to hearing loss. Multisensory integration therapies have been successfully developed and applied in the treatment of other similar illusory conditions which arise from sensory deprivation / loss e.g. the treatment phantom limb syndrome through visual therapies to alleviate the condition’s symptoms. The mutebutton system is configured to deliver tactile and auditory stimulation which aligns with the individual’s hearing loss to promote Neuroplasticity in a similar manner, leveraging the natural phenomenon of multisensory integration.

From an ENT perspective how does mutebutton work?

The mutebutton system has been developed to address the need for a tinnitus treatment and combines synchronous tactile and auditory stimulation to promote neuroplasticity, the manipulation of the brain’s ability to learn and re-learn.

What type of patients might be referred for mutebutton?

Could you summarise your clinical research findings and patient outcomes?

Over a 10 week period, the treatment has been shown to gradually reduce the sounds of tinnitus in clinical studies conducted at Maynooth University and at the Hermitage Medical Clinic. Clinical research results showed a mean reduction of 8.6dB (42% decrease in loudness) over 10 weeks of treatment. 75% of the study participants ‘would recommend mutebutton’ to a friend.

What are the advantages of using mutebutton instead of tinnitus retraining therapy?

The mutebutton treatment is recommended to be used in the home environment for a minimum of 30 minutes and maximum of 60 minutes per day. Unlike other technologies such as noise maskers and sound therapies that only provide relief when using the device, mutebutton is a clinically proven tinnitus treatment that combines tactile and auditory stimulation to drive real improvement in the patient’s condition after use.

For patients using hearing aids, how might mutebutton be incorporated into their daily routine?

Based on our clinical studies, most patients used the device first thing in morning or last thing at night. The 60 minutes can be split into two 30 minute sessions or four 15 minute sessions to suit the patient’s lifestyle. It’s recommended that hearing aids be removed during the treatment.

How is mutebutton different to other neuromodulation techniques?

The mutebutton treatment is a combination of sound and trigeminal nerve stimulation, as opposed to the neuromodulation treatment which is sound therapy only. 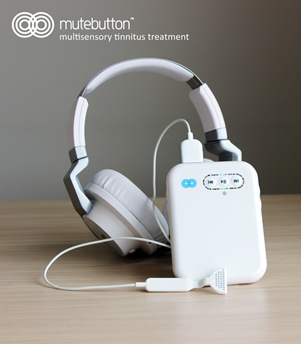 Practically speaking, how does the patient manipulate and administer the device? Might the time vary depending on their symptoms?

As mentioned above, it is recommended that patients with subjective tinnitus use the device for a minimum of 30 minutes and maximum of 60 minutes regardless of their symptoms. The device can be ordered via the mutebutton website and patients can select a clinician in their area who will fit the device based on the results from their audiological / tinnitus consultation. During the appointment patients will be instructed on how to use the device, maintenance and cleaning of the device.

During the treatment the tonguetip™ rests on the tip of the patient’s tongue, gently stimulating the lingual nerves. This is paired with relaxing audio delivered through the earphones. These signals are delivered in a synchronous manner, providing multi-sensory stimulation to promote neuroplasticity, which gradually reduces tinnitus symptoms.

Can the patient change any of the settings themselves?

Patients have full control of both the auditory and tactile stimuli enabling them to increase or decrease levels to their comfort.

Are the earphones supplied recommended, or could they use their own earphones?

The earphones supplied are recommended to use with the device. We have carefully selected headphones for the best anticipated patient outcome, comfort and quality of sound as determined by our team.

What general consumables are required for the device and how often are they replaced?

The tonguetip is a consumable supplied with the device to be replaced after 90 hours of use. For patients using their device for 30 minutes a day, this would equate to a replacement after six months.

When is the launch date and where might people find further information?

The product will be launched in December 2014 in Ireland, and then a European roll-out will follow beginning in January 2015. Further information is available at our website at www.mutebutton.ie

Acknowledgement
Thank you to Caroline Hamilton and the team at Neuromod Devices for contributing to this spotlight, and Audiologist Mariolla Rabbitt for assistance with the research and Q&A. We look forward to the launch. 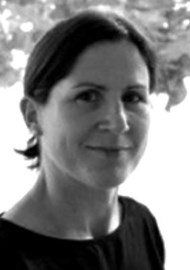 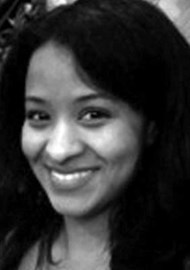