THRIVE is a physiological mechanism for oxygenating and ventilating patients who are under general anaesthesia and who have diminished or absent respiratory effort [1]. Classical ventilation requires bulk flow of gases into and out of the lungs driven by chest movements. A patient who had been breathing air will desaturate to dangerous levels within two minutes of being rendered apnoeic.

Through the process of preoxygenation the ‘apnoea time’ can be increased but, unless ventilation is restored, the patient will still desaturate within minutes, which we regularly observe in microlaryngoscopy under apnoeic technique. It has been known for over 100 years that filling the pharynx with 100% oxygen, without any respiratory movements, will prolong apnoea time up to a point, but it does not clear CO2. This observation came to be known as ‘apnoeic oxygenation’.

“Ventilation occurs with a non-invasive nasal, rather than a tracheal, cannula and can be continued during efforts to secure an airway.”

In 2012 Weingard and Levitan described a clinical application of apnoeic oxygenation, called nasal oxygenation during efforts securing a tube (NODESAT) [2]. This involved using a nasal cannula and 12L/min of cold dry oxygen during rapid-sequence anaesthesia induction to delay desaturation. However, flows >10 L/min of cold dry nasal oxygen can cause mucosal trauma and are painful. Conversely, warmed and humidified oxygen can be delivered at much higher rates to awake patients without causing significant discomfort or trauma [3]. In 2013, Patel and Nouraei introduced warmed and humidified high-flow nasal oxygen using the OptiFlow system (Fisher and Paykel Healthcare Ltd, Auckland, New Zealand) with the aim of delivering a more comfortable and optimal preoxygenation to patients with known or anticipated difficult airways.

We expected an increase in apnoea time on the basis of ‘aponeic oxygenation’, but in fact observed that not only were apnoea times being in excess of what may be expected from apnoeic oxygenation, but carbon dioxide was also being cleared, as evidenced by a rate of rise of CO2 during apnoea that was approximately 1/3 of what would have been expected [1]. This could only have occurred if actual ventilatory exchange was taking place, which in turn suggested that a physiology, supplementing classical aponeic oxygenation, was driving ‘ventilation without ventilatory movements’. The concept of transnasal humidified rapid-nsufflation ventilatory exchange (THRIVE) came thus to be introduced (see Figure 1A) [1]. 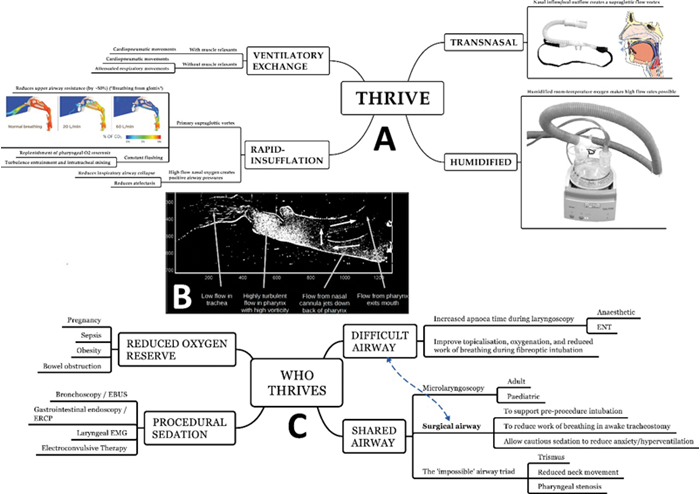 Figure 1.
A. An overview of the physiology of THRIVE. The image within Rapid-Insuffltion is a Computational Fluid Dynamic (CFD) model of an upper airway at the end of spontaneous expiration with 0, 20 and 60L/min of nasal flow. At 60L/min CO2 is entirely flushed out of the airway and 100% oxygen, shown in blue, is present at the immediate supraglottic area. This causes deadspace flushing, preventing rebreathing and reducing upper airway resistance.
B. A Particle Image Velocimetry (PIV) 2-dimensional model of high-flow nasal oxygen in the absence of cardiogenic oscillations, showing highly-turbulent flows within the supraglottis, but minimal tracheal penetration.
C. A non-exhaustive list of current THRIVE indications.
Computational Fluid Dynamic and Particle Velocimetry images are provided Courtesy of Fisher & Paykel Anaesthesia Research Group.

Ventilation without ventilatory movements – that is, oxygenation and CO2 clearance in the absence of lung ventilation – was observed in 1909 by Samuel Meltzer during direct and continuous intratracheal oxygen insufflation. The same phenomenon was later observed by Arthur Slutsky using tracheal insufflation of O2 (TRIO) and for a time in the 1980s and 1990s, ‘oscillatory ventilation’, which continues to be used in highly-selected cases in paediatric ventilation, and ‘constant-flow ventilation’, were studied as possible approaches for reducing ventilator-associated lung injury. Continuous oxygen insufflation using a needle cricothy roidotomy or an airway exchange catheter remains a recognised oxygenation rescue intervention.

With THRIVE, ventilation occurs with a non-invasive nasal, rather than a tracheal, cannula and can be continued during efforts to secure an airway. High-flow nasal oxygen, which enters the nose at 70-90L/min, loops around the soft palate, and exits through the mouth, creates a highly turbulent ‘primary supraglottic vortex‘ (see Figure 1B) which constantly replenishes the pharynx with oxygen and prevents entrainment of room air. This vortex effectively bypasses the upper airways which ordinarily account for approximately 50% of the resistance of the entire respiratory system to airflow [4]. By effectively breathing ‘directly from the glottis’, work of breathing is reduced by approximately 50% [5]. These high flows, which are made possible through warming and humidification, also generate a positive airway pressure even if the mouth is open, which in turn reduces upper airway collapsi-bility and distal airway atelectasis [6]. The primary vortex does not, however, extend deep into the trachea and cannot by itself account for the observed level of gaseous exchange (see Figure 1B).

Further work showed that ‘apnoeic ventilation’ to be the result of an interaction between the primary supraglottic vortex from above and cardiogenic oscillations from below. Cardiogenic oscillations result from compression and expansion of the small airways, brought about by blood leaving and entering the thoracic cavity with each heartbeat [7]. The typical amplitude of a ‘cardiogenic breath’ is around 7-15ml per heartbeat. Ordinarily, cardiogenic oscillations result in small-volume mass movement of gases within the trachea. With THRIVE, this volume is flushed into the supraglottic vortex during cardiogenic ‘expiration’, is removed, and is replaced by 100% oxygen. Cardiogenic ‘inspiration’ moves this oxygen towards the distal airways and also entrains turbulence, which enhances intratracheal mixing. If we assume the volume of a ‘cardiogenic breath’ to be 12ml per heartbeat, and a heart rate of 70 per minute, 840ml of gas which contains CO2 is removed, and is replaced with 100% oxygen. This is not enough to achieve full CO2 clearance which is why with THRIVE, CO2 still accumulates, albeit at a slower rate than with classical apnoeic oxygenation. It does, however, equate to the amount of oxygen contained in 4L/min of air and could thus provide enough oxygen to maintain apnoea for an extended period.

Another consideration for ENT is that this volume of gas can pass through a critical stricture with minimal respiratory effort and without the need for the patient to actually be taking breaths through a compromised airway. This, combined with the bypassing of the nose-to-glottis resistor, upper airway splinting through positive intrapharyngeal pressure, and reduced lower airway atelectasis, translates to a reduction in the work of breathing, increased patient comfort, and diminution of stridor in patients with acute airway compromise.

Uses of THRIVE in shared-airway surgery

Indications for using high-flow nasal oxygen in airway management continue to expand (see Figure 1C). We cautiously use THRIVE in cases of compromised airway to reduce work of breathing before induction of anaesthesia to improve oxygenation and extend apnoea time during attempts to secure the airway in stridulous patients. This is done in the context of a comprehensive airway assessment and with shared decision-making between the anaesthetist and the ENT surgeon. THRIVE does not replace this decision-making and it does not rescue an already precipitated total airway obstruction. THRIVE does not replace awake fibreoptic intubation or awake tracheostomies, but increases the safety of both, through better topicalisation, reduction in the work of breathing [8], generating positive pharyngeal and distal airway pressures [6], and improving safety of conscious sedation, which is used to reduce anxiety, hyperventilation, and fatigue, in real-world settings, in approximately 2/3 of patients undergoing ‘awake’ tracheostomies [9]. In highly selected cases, its application may shift a marginal decision between awake tracheostomy and intubation towards the latter, but these are case-by-case, and often highly nuanced decisions and must not be taken lightly.

“THRIVE has revolutionised our practice and improved patient safety in difficult airways, and in cases where precipitous desaturation on induction had previously been likely.”

We also use THRIVE as the de facto standard of care for managing the shared airway is microlaryngoscopy and pharyngolaryngoscopy and have established a streamlined joint process (see Figure 2) which allows for up to seven patients to be operated on during a half-day operating session. More detailed information about the use of THRIVE in non-obstructed microlaryngoscopy is provided in another article. 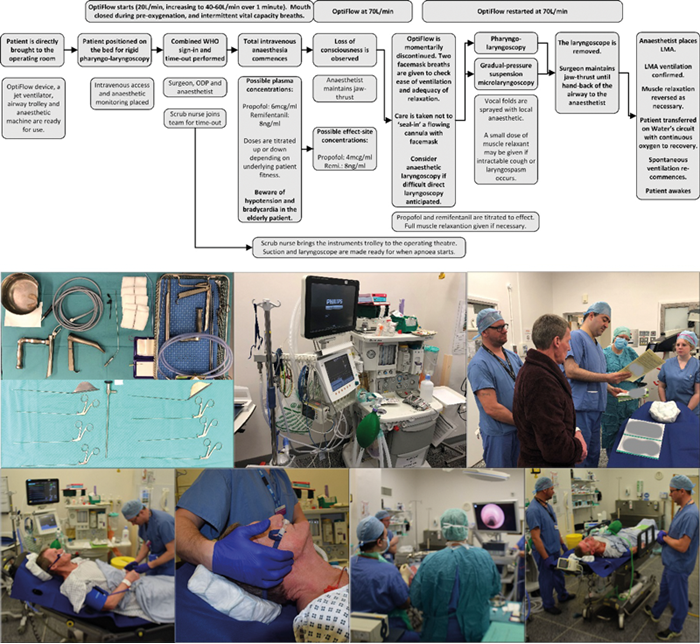 Figure 2. Top. Process flow of the Poole approach for using THRIVE in surgical microlaryngoscopy. Bottom. Top left image shows the array of instruments used during a typical microlaryn-goscopy, including supraglottic jet ventilation needle, Benjamin-Lindholm, and Rhys-Evans/Dedo laryngoscopes which are opened and ready for use in every case involving THRIVE. Top middle image shows OptiFlow and Manujet (or a jet ventilator) both being open and ready for use. Top right image shows combined World Health Organization (WHO) anaesthetic sign-in and surgical time-out with the patient awake. This aims to reduce apnoea time. The patient is placed in head-up position for optimum preoxygenation (bottom left image). OptiFlow starts as soon as the patient is placed on the table and is continued whilst monitoring is attached and intravenous access is established. The patient is advised to keep mouth closed, breathe through the nose, and periodically taken deep breaths. Once consciousness is lost, full jaw-thrust is maintained (bottom left mid image), and surgical laryngoscopy is commenced (bottom right mid image). . If difficult access is encountered, the laryngoscope is placed in suspension and within the pharynx, enough to create an outflow tract. Over several minutes, suspension is gradually increased to help drain fluids from the base of tongue to improve view, without placing undue pressure on teeth (Gradual-pressure suspension laryngoscopy). At the end of the procedure (bottom right image) a laryngeal mask airway (LMA) is placed and attached to a Water’s circuit which is connected to 6-10L/min of oxygen delivered via a cylinder. The patient is transferred to recovery and the anaesthetist remains with the patient until spontaneous ventilation is re-established.

THRIVE has revolutionised our practice and improved patient safety in difficult airways, and in cases where precipitous desaturation on induction had previously been likely. Its role in different and novel situations is continually being assessed and expanded, and we have found that it has now become a minimum standard of care in a wide range of situations.

It does not replace good airway management and planning, and an understanding of the equipment, set-up, indications and contraindications for the use of THRIVE is crucial to its successful use. It is important to recognise that THRIVE may fail to prolong the apnoea time as anticipated, leading to desaturation particularly in patients with morbid obesity and when total airway obstruction occurs. A secondary plan for oxygenation should always be available. From a surgical shared-airway perspective, THRIVE has become an essential component of our theatre equipment that supports us in our all aspects of our difficult airway practice. 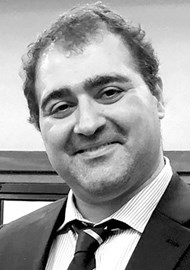 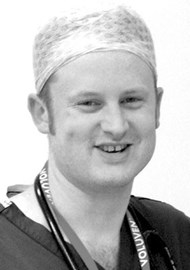 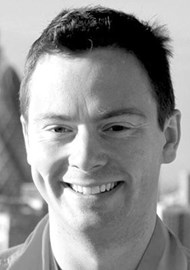 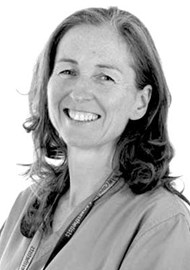 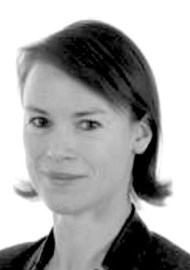 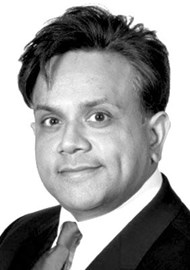