Charles Skinner Hallpike and the Hallpike Prize
By Julian Ahmed

The British Association of Audiovestibular Physicians introduced the Hallpike Prize in 2009 as an award to stimulate the pursuit of knowledge in relation to the field of audiovestibular medicine. Julian Ahmed celebrates the history of the great man the award was named after, and reviews findings from previous prize recipients and subsequent impact of their work.

Named after Charles Skinner Hallpike – the person many view as the founding father of neuro-otology – the Hallpike Prize is open to professionals from all disciplines, united in the spirit of working towards a common goal. Fittingly, it was a donation by Charles Skinner Hallpike’s son – Emeritus Professor of Neurology, Jeremy Hallpike – that allowed the annual prize to be awarded.

Charles Skinner Hallpike was born at the turn of the 20th century in the humble origins of a hill station in what is now known as Pakistan, with his family moving to the United Kingdom when he was three years old. His childhood was filled with struggle, after affliction with Perthe’s disease, though he overcame obstacles with dogged determination; a trait that would shape and come to characterise his future career. He started his medical training at Guy’s Hospital in 1919, eventually obtaining his Bachelor of Medicine and Bachelor of Surgery in 1926 and election as fellow to the Royal College of Surgeons by 1931.

He spent almost a decade working as a research fellow in the Ferens Institute of Otology, based at the Middlesex Hospital, before moving on to a post as Foulerton research fellow for the Royal Society. He went on to become a member of the Medical Research Council. In 1944, he joined the otologic research unit based at Queen’s Square, where he was appointed as consultant aural physician; a post he held until retiring in 1967.

Hallpike the scientist and inventor

Throughout his career, Charles Hallpike maintained a prolific focus on the importance of scientific research to inform clinical practice, publishing 241 papers on subjects such as Ménière’s disease, vestibular function, optokinetic and caloric nystagmus, and inner ear degeneration. Key achievements include developing bi-thermal caloric testing protocols and his eponymous clinical test for benign paroxysmal positioning vertigo. Notably, Hallpike had a good knowledge of precision engineering, and much of the equipment in his laboratory had been built to his designs. This included apparatus for sectioning the temporal bone, a rotating chair for testing vestibular function, and a monocular ear microscope. His efforts were not solely related to neuro-otological devices, however, and he is credited with inventions across the board, including lightweight body armour for soldiers and even a type of personal magnifying spectacles.

Throughout his work, a key theme he developed was that to fully understand neuro-otological disorders, a cross-disciplinary approach is required. He was also one of the founding members of the Barany Society that promotes neuro-otological practice internationally. Ultimately, it was his pioneering efforts to promote multidisciplinary practice, guided by clinician scientists, that led to development of the speciality of audiological medicine, which gained official recognition in 1975. Subsequently, the name has been amended to audiovestibular medicine, reflecting the equal focus of managing balance disorders and the key role played in the neuro-otological community. It is recognised, however, that a core driver for innovation is scientific research, which the Hallpike Prize aims to promote in order to help further advance the field of neuro-otology.

Previous winners of the Hallpike Prize

The first winner in 2009 was ENT and Audiology News’s very own Section Editor, Miss Emma Stapleton, who was awarded the prize for her high-altitude studies in the Himalayas on the effects of altitude-induced hypoxia and increased intra-cochlear fluid pressure on the healthy human inner ear. Since winning the prize she has completed training in ENT, and is currently gaining further experience as a skull base, cochlear implant and complex otology fellow in Manchester.

While it may not appear immediately relevant to everyday practice, her studies highlighted how an understanding of pathological processes can expand our knowledge of the field and illuminate pre-existing conceptions. Interestingly, in recent years there has been emerging interest in hypoxia as causative factor for both endolymphatic hydrops and central vestibular pathology, with development of possible new treatment modalities.

The 2010 winner, Dr Quadeer Arshad, has a background as a clinical scientist and was awarded the prize for his work on ‘An objective test of otolith function using the ocular counter-roll afterimage device’. Since winning, he has gone on to develop his research career, contributing to 31 papers published in the neuro-otology field. These cover a wide range of topics from clinical aspects, such as use of transcranial direct stimulation as a novel therapy, to using transcranial magnetic stimulation as a tool to investigate adaptations in the visual cortex. He is now working as an honorary lecturer in vestibular cognition and spatial orientation in the division of brain sciences at Imperial College London. His research interests include how interhemispheric competition influences vestibular cortical functions and vestibular cognition in healthy individuals and patients with asymmetrical neurological damage.

“Although very much still in its infancy, the Hallpike Prize has already seen some exciting and inspiring winners so far and we hope this pattern will continue.”

The 2011 winner was Dr Peter West, current BAAP President elect, and Consultant Audiovestibular Physician at Queen Alexandra Hospital, Portsmouth Dr West was awarded the prize for his research entitled, ‘A comparison of the techniques available for identifying peripheral vestibular nystagmus’. He continues to promote the use of evidence-based clinical practice in the field of neuro-otology via his roles in the BAAP and the Balance Special Interest Group of the British Society of Audiology. Recent work includes initiation of national audit on practice of vestibular assessment as part of the BAAP National Audit Committee.

In 2012, Dr Mahmood Bhutta was awarded the prize for his work on an animal model of otitis media with effusion (OME). Although OME is one of the most common conditions we see, there remains controversy over effectiveness of management strategies and relatively little is known about the underlying pathophysiological mechanisms. Dr Bhutta has subsequently gone on to pursue investigation of the genetic predisposition for otitis media. At present, he is running a large-scale project in conjunction with the UCL Ear institute and MRC Harwell, using cutting edge gene sequencing technology to search for mutations in two genes identified as key in the inflammatory process underlying OME. Impressively, the study has been attributed as having the largest collection of DNA samples in the world for this condition, with samples from around 1300 families.

In 2013 Dr Mitesh Patel, PhD, was awarded the prize for his work on ‘Locomotor adaptation in Meniere’s disease and vestibular neuritis patients’, using the ‘broken escalator’ paradigm to look at the complex interaction the vestibular system plays in feed-forward motor control. Although the paradigm used is still currently very much a research tool, it is helping us to understand the role of feedforward motor control and learning has potential impact on the development of novel rehabilitation techniques. In particular, this is of relevance to management of central vestibular dysfunction. Dr Patel has continued to do further work investigating locomotor adaptation, Ménière’s disease and their effects on postural control and oculomotor function. He currently is working as an honorary research associate in the Imperial College neuro-otology unit.

The 2014 winner was Dr Diego Kaski for his work on demonstrating how the temporo-parietal junction acts as an internal clock for self-motion perception. He has contributed to over 60 publications covering diverse aspects of neurology and neuro-otology, from clinical aspects of movement disorders to visual dependency following vestibular neuritis. He is also a prior recipient of the Barany Young Scientist Award and is currently finishing his speciality training in neurology with intention to set up an academic neuro-otology unit in the future.

The 2015 winner Dr Hena Ahmad MRCP work on reduced visual cortical excitability in patients with bilateral peripheral vestibular failure. She has completed her PhD and has started training as a speciality registrar in neurology, based in London.

The Hallpike Prize has already seen some exciting and inspiring winners, and we hope this pattern will continue. Winners are given the opportunity to present their findings at the British Association of Audio-vestibular Physicians National Conference annually. The prize of £300 is awarded annually for the best project of the past 24 month period (research, audit or review of subject) in the area of audiovestibular medicine, and is open to anyone regardless of background. Submission is via a structured A4 form summarising the project and further details can be found on the BAAP website (www.BAAP.org.uk). We hope that learning a bit more about the background and ethos behind the Hallpike Prize inspires the passion to explore your curiosity and we look forward to your future submission.

Dr Julian Ahmed is a senior trainee, currently completing speciality training in audiovestibular medicine on the Pan London rotation. He has a background as a sound engineer prior to medicine and was drawn to the speciality by its holistic approach, underpinned by a core of evidence-based science. 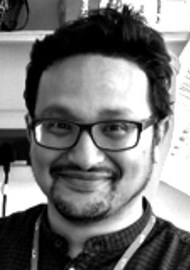