With the aim of creating fair selection into the few available training numbers, ENT was one of the first surgical specialties to move to a national selection process for selecting new registrars in England. Since 2013 the selection process has been expanded to include posts in Scotland.

With only 30-35 national training numbers (NTNs) in ENT available through national selection each year, it is not surprising that many keen well-qualified trainees miss out on a post. The ENT Specialty Advisory Committee (SAC) have previously explained that the interview marking scheme for candidates is designed to allow fair competition to those applying from core training by deducting points for additional time in ENT. Furthermore it has been suggested that a candidate’s first attempt at national selection represents their best chance of being offered an NTN. This has caused anxiety for those missing out and considering accepting a locum appointment for training (LAT) post. Others concerned include those who have made a relatively late decision to do ENT or candidates who have taken an alternative career path. Many consultants or registrars in ENT will have been faced with such a trainee seeking guidance on whether they remain a realistic candidate for an NTN.

But what should these candidates be advised about? Do candidates only have one year when they are realistically a strong applicant? Is a late decision to pursue ENT incompatible with obtaining an NTN? To answer these questions we sought to establish the typical profile of candidates successfully obtaining an NTN at England National Selection. All 34 candidates successful from the 2012 National Selection were contacted via an electronic survey. All replied and we discuss the information they provided which may help to shape the advice given to aspiring future trainees evaluating their likelihood of success.

Survey of successful candidates in 2012

In 2012, 155 candidates were interviewed and 34 candidates were awarded an NTN. Candidates were given an interview score out of 340. The portfolio station accounted for 120 of these marks, from which the weighting for different levels of ENT experience accounted 20 marks with 6-18 months (excluding foundation years) scoring the maximum. The highest overall score achieved was 307. All 34 successful candidates from the 2012 round responded to our survey. The 34 NTNs consisted of 23 males and 11 females. 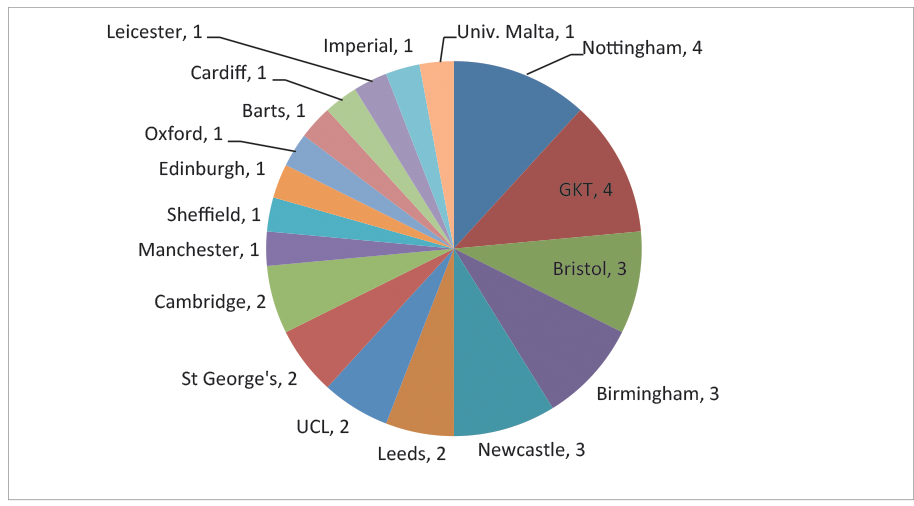 Figure 1 shows the medical schools at which the NTNs undertook their clinical studies. There is a wide representation of schools, with Nottingham and Guy’s, King’s and St Thomas’ School of Medicine (GKT) producing the most with four each. One candidate trained abroad (Malta) and undertook F1 onwards in the UK. Six English schools with at least a 2008 cohort were not represented (Brighton and Sussex, East Anglia, Hull-York, Liverpool, Peninsula and Southampton). 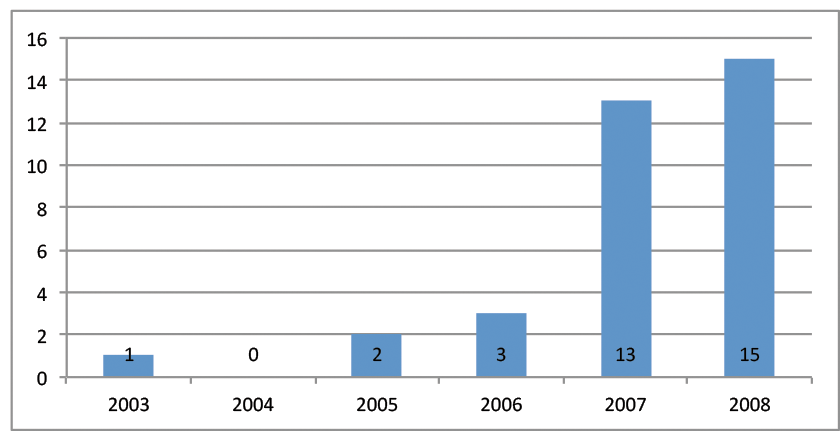 Figure 2 shows successful candidates’ year of graduation. Only 15/34 candidates graduated in 2008 and therefore had no additional years beyond the standard training pathway. Examples of additional years included a year working abroad, anatomy demonstrating and switching after a year of anaesthetics core training. Only five people graduated before 2007; the earliest being in 2003. This data supports the suggestion that additional time outside the foundation programme-core training ladder need not exclude candidates from a successful ST3 application. 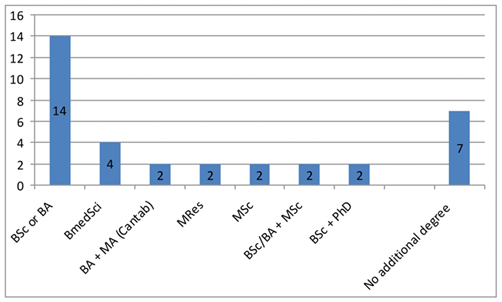 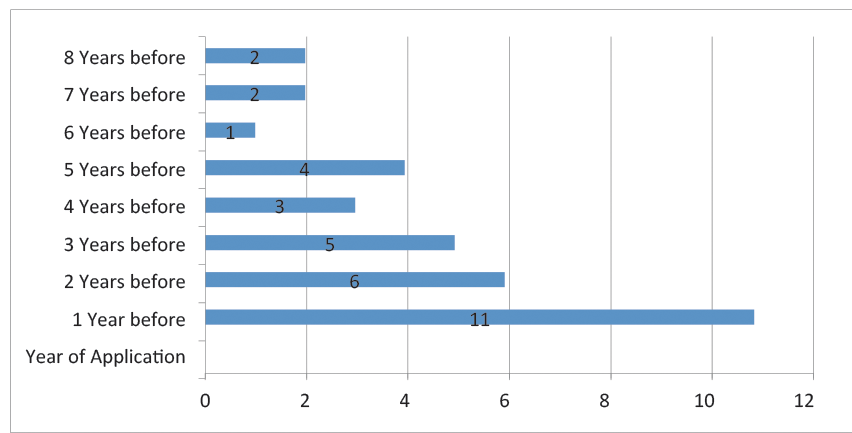 Years of preparation prior to application

Figure 4 shows when candidates made a firm decision to pursue a career in ENT. Despite the considerable standard of portfolio required, nearly a third of candidates only chose ENT as their desired specialty in the academic year prior to application, demonstrating that it is possible to succeed following a career change or late introduction to ENT. Many candidates had prepared many years in advance however, with the longest preparation time being eight years. 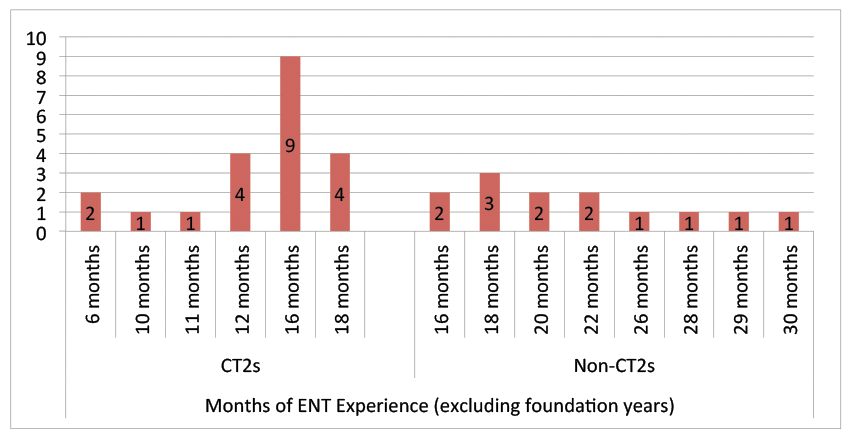 Figure 5 shows the number of months of ENT undertaken after the foundation programme (which is how it is measured at interview). The majority of candidates were successful following an ENT-themed core surgical training programme. Whilst the person specification states an optimum as 12 months ENT, only four candidates reported undertaking such a programme. The modal value was 16 months and two candidates succeeded with only six months. Of the 13 candidates applying from beyond CT2, five had an experience level that would fall within the CT2 bracket. Eight out of thirty-four reported experience ranging 18-30 months. No candidates with ENT experience beyond 30 months were successful, suggesting that the level of penalty given to this category of candidates may prevent the likelihood of a successful application.

Prior to 2008, ENT trainees were required to pass all parts of both MRCS and DOHNS examinations. Between 2008 and 2011 it was possible for candidates to gain ‘MRCS DOHNS’ without taking the MRCS part B. In 2011 the ‘MRCS(ENT)’ became available by passing only MRCS Part A and DOHNS Part 2. Figure 6 shows the combination of exams taken by successful candidates to gain Royal College membership and eligibility to apply for ENT ST3. Twenty-six out of thirty-four still chose to complete all four exams despite this not being mandatory. Only one utilised the new MRCS(ENT) route. Interestingly there was no distinction made between these candidates at interview. It may be that candidates chose to take more than the required exams in order to remain eligible for other surgical specialties, should their ENT aspirations fail. We also suspect that this trend may change in the future as MRCS(ENT) becomes more established. 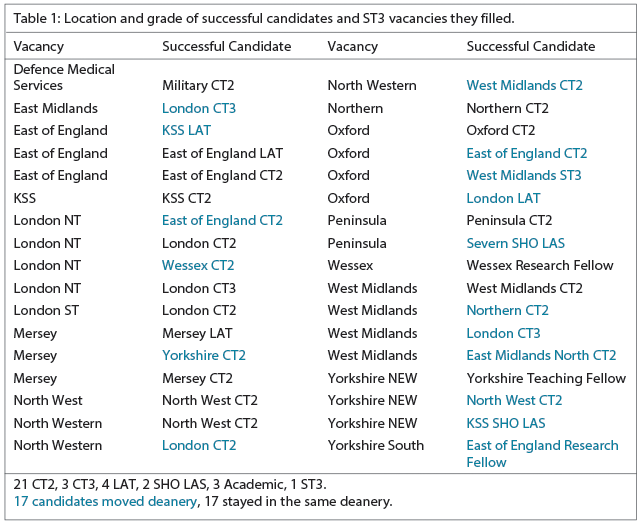 The effect of national selection on geographical relocation

Table 1 shows the location and grade of successful candidates and the ST3 vacancies they filled. Half of the 34 were offered posts in the same deanery they were currently training in, while half accepted posts in new deaneries. Prior to the national method of selection, it was widely thought that deaneries were more likely to appoint candidates who had previously been working in the same deanery and therefore known to the local selectors. Our data suggest that relocation of trainees is more prevalent with national selection. This is due to a combination of some candidates’ preference to move and others being displaced. Some deaneries are oversubscribed. At the final post-interview ranking, the candidate ranked 17th was offered his / her first-choice deanery, while the candidate ranked 18th was offered his / her sixth choice.

Unconventional pathways to an NTN

Twenty-nine candidates were in CT2, CT3 or first year LAT appointments at the time of their successful interview. The career paths of the remaining five are shown in Figure 7. Whilst relatively rare, this shows that entry to ST3 from non-training posts is still possible. Two candidates applying from research posts reported applying more than once prior to being successful this year.

Advice from a personal perspective

Getting on to an ENT-themed core training programme will significantly aid a junior trainee trying to achieve the requirements for ST3 selection. Achieving the required exams is only the start and emphasis must be put on publications, presentations and audits as well as prizes, teaching and leadership achievements. For 2014, the portfolio mark scheme has been published to candidates, offering a clear measure of what is required of a CV for maximum points.

It must be emphasised though, that the CV is only one aspect of enabling a candidate to be successful. The interview process is equally if not more crucial and it is certainly possible for a candidate with the strongest CV to lose out on an offer by failing to prepare for the interview stations. Likewise it has been known for a strong performance to compensate for weaknesses in the CV.

The selection interview takes the form of six stations (communication skills, technical skills, clinical scenario, management, structured interview and portfolio review) each lasting 10 minutes. Preparing for the interview should start early and should very much be looked on as preparing for an exam, perhaps the most important of one’s career. Private study and preparation is helpful as well as seeking advice from previously successful candidates. Candidates should consider that there is little room for personality or CV ‘quirks’ gaining much credit at interview if not applicable within the discrete standardised mark scheme at each station. Selection criteria are modified year on year and candidates need to keep in touch with the latest changes. Joining ENT UK, reading ENT & audiology news, signing up to the AOT email newsgroup (www.aotent.com) and joining the AOT core trainee mailing list are all ways of receiving the most up-to-date advice.

Several preparation courses are run and a forward-thinking candidate may consider attending these a year before the interview to allow enough time to bring your CV up to the required standard. Both authors found preparing in a small group with trusted colleagues particularly beneficial. Important sources of information including the websites for ENT UK, Royal College of Surgeons, General Medical Council (GMC), Intercollegiate Surgical Curriculum Programme (ISCP) and Joint Committee on Surgical Training (JCST) should all be sifted through to create a candidate’s own interview ‘syllabus’.

National selection has become the new model for selection into higher surgical training across most specialties. Entry into ENT higher surgical training is highly competitive and candidates must understand what is required to succeed and keep up-to-date with the changes to this evolving selection method. Candidates should be aware that due to limited places and strong competition, relocating from their current deanery may be required. Core surgical trainees do make up a large proportion of the successful candidates but it is certainly possible to succeed after making a relatively late decision to pursue ENT or taking an unconventional career route.

The Association of Otolaryngologists in Training ­– by trainees for trainees

The Association of Otolaryngologists in Training (AOT) is the organisation that represents all UK ENT Trainees. For the past 25 years, it has been inviting those involved or with an interest in ENT training to attend, a now legendary, annual conference. The emphasis is on building strong and lasting links between its members, whilst providing relevant training advice from eminent consultant speakers.

This year the conference moves to the South West as the Peninsula Deanery steps up to the plate. On 19-20 June the venue will be Woodbury Golf and Country Club near Exeter. Firstly an afternoon of teambuilding coasteering has been arranged to ensure that all get fully acquainted with the beautiful South Devon coastline, delegates can climb, scramble and jump off the local sea cliffs. Following this, a coach will provide transport back to the hotel to enjoy a barbecue in the landscaped grounds. 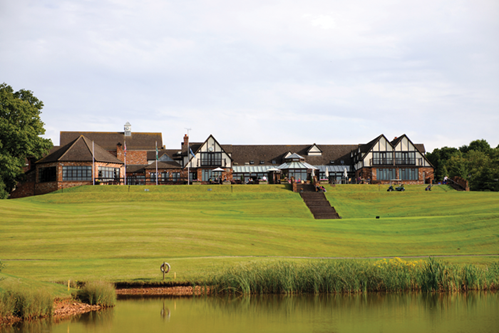 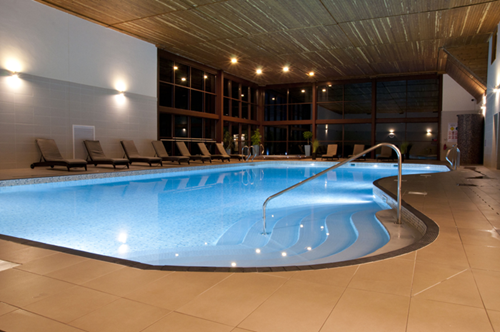 On Friday there will be talks from speakers including Mr Simon Hickey discussing updates in training from the Specialist Advisory Committee and proposed changes to the fellowship examination. For those who have passed their exams there will be talks on post-CCT fellowships and challenges faced in the early years as a consultant. Between these presentations are interesting lectures on subjects such as the practicalities of private practice, medico-legal aspects of medicine amongst others.

For our pre-ST3 delegates, Professor Narula will be talking about the ins and outs of ST3 selection, the latest statistics will be provided on recent interview outcomes. This year sees the introduction of a pre-ST3 research section with prizes to enhance their CVs.

During Friday’s academic programme, AOT Annual General Meeting will convene. This will allow reallocation and voting for all committee positions, as well as a decision on the allocated deanery to host next year’s conference! Delegates will then let their hair down at a formal black tie dinner celebrating the summer solstice with dancing into the wee hours. 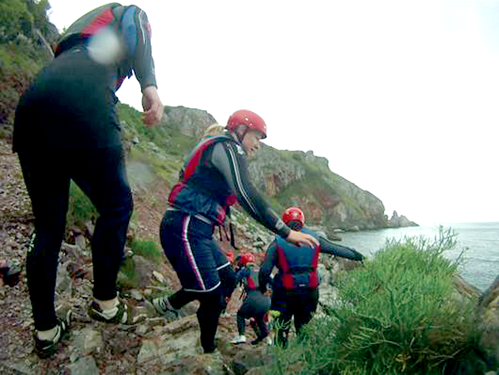 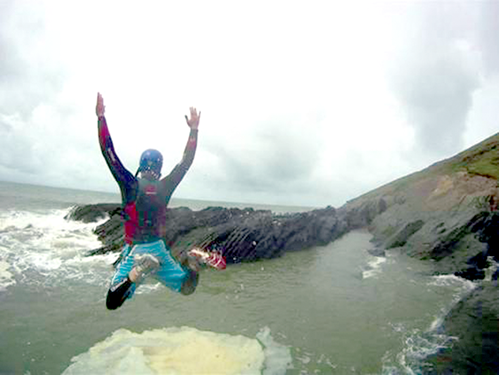 All juniors are welcome to join the conference, whether a specialist ENT trainee, pre-ST3 delegate or those keen to find out more about the specialty and some of those within it. The AOT welcome new members, especially those keen to get involved running for committee roles. All details along with the application process are detailed on our website (www.aotent.com). We hope to see you in June! 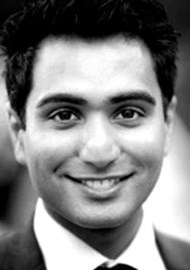 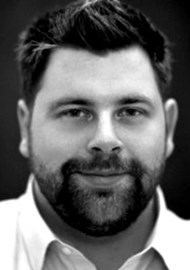 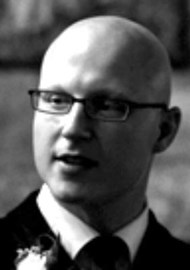 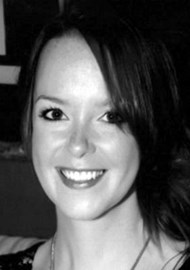