The 30th Annual Meeting of the Japan Otological Society (JOS) was held from 11-14 November 2020 in Kitakyushu under the guidance of Prof Hiroshi Yamashita, Department of Otolaryngology, Yamaguchi University Graduate School of Medicine. The meeting was organised using a hybrid model, combining on-site presentations with socially distanced attendees and live streaming for off-site attendees. Additional measures were taken on site to prevent the spread of COVID-19, including disinfection and masks except for presentations and photos. Society members could also view the presentations on-demand until 7 January 2021. 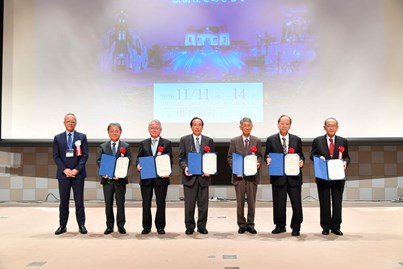 The incoming Chair of the JOS, Prof Seiji Kakehata, together with former JOS leaders.

While this meeting was officially titled the 30th Annual Meeting, the history of the JOS can actually be traced back 60 years when its earlier incarnation was founded in 1961. The current version of the JOS was founded in 1991 when it merged with the Japanese Society of Clinical and Basic Ear Sciences. A special ceremony and symposium were held to commemorate the 30th anniversary of the modern JOS, during which Dr Kimitaka Kaga (Professor Emeritus, University of Tokyo) gave a lecture on the history of otology in Japan from the 19th century to the present. In addition, all former leaders of JOS joined in and spoke on the past achievements of the JOS. The meeting closed with 12 lectures focusing on the past, present, and future development of each separate otological field. 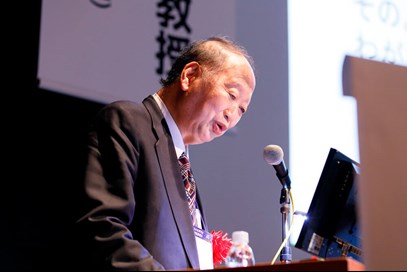 Prof Kaga giving a lecture on the history of otology in Japan.