Enlarged vestibular aqueduct is reported to affect up to 15% of the paediatric population with sensorineural hearing loss. Devin McCaslin and Bridget Smith provide an up-to-date overview of the mechanisms and clinical symptoms underlying the condition and share some of the latest findings from their laboratory at Vanderbilt University Medical Centre.

First described by Valvassori and Clemis in 1978, enlarged vestibular aqueduct (EVA) is the most common inner ear malformation associated with early-onset sensorineural hearing loss, reportedly affecting up to 15% of paediatric patients with sensorineural hearing loss [1, 2]. In addition to deficits in hearing, EVA has been associated with vestibular signs and symptoms. The presence of EVA can now be consistently identified early in a child’s life, and the audiologist has a unique role in managing both auditory and vestibular deficits in this patient population.

The vestibular aqueduct (VA) is a small, bony canal in the otic capsule that extends from the vestibule to the posterior surface of the petrous portion of the temporal bone. The duct provides passage for the endolymphatic duct and endolymphatic sac, which play a role in maintaining the ionic equilibrium of cochlear fluids. Enlarged vestibular aqueduct syndrome (EVAS) is an abnormally large dilation of this canal. 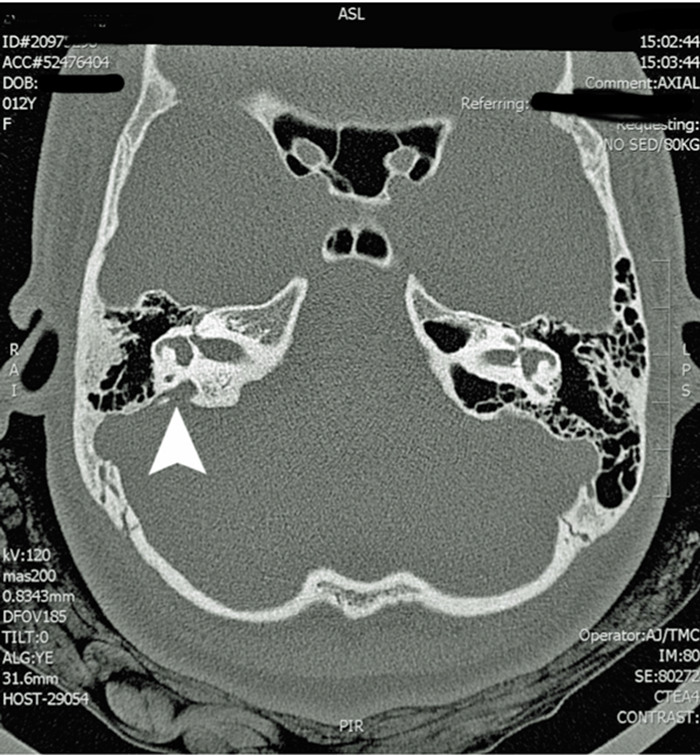 The current gold standard for detecting EVA is through high-resolution computed-tomography and fast-spin echo magnetic resonance techniques that allow the endolymphatic duct and sac to be clearly visualised (Figure 1). The classic radiographic description of large vestibular aqueduct syndrome (LVAS) defines aqueductal enlargement as that diameter exceeding 1.5 mm in an anteroposterior dimension, measured halfway between the common crus and the external aperture [3]. The size of enlarged vestibular aqueducts can vary widely among patients. It is now current practice at many centres to order imaging in children who have a sudden decrease in hearing or who complain of severe dizziness.

The presence of an EVA essentially creates a pathophysiologic “third window” within the inner ear system. This is similar to other third window disorders such as superior canal dehiscence (SCD), in which the bone abnormality in one of the semicircular canals creates a third low impedance pathway where pressure is displaced. The impedance properties of the inner ear are affected by the “third window,” resulting in air-bone gaps without the presence of middle ear pathology [3] (Figure 2). EVA is also associated with mutation of the SLC26A4 gene (also called the PDS gene). This is the same gene that is reportedly related to Pendred syndrome. Patients with other syndromes (e.g. Waardenburg and CHARGE) resulting from mutations of the SLC26A4 gene have also been reported to present with EVA [2]. 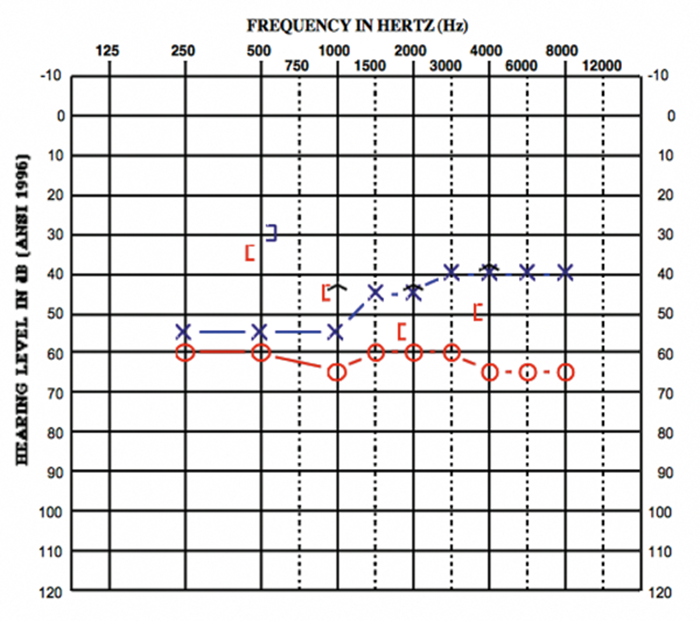 Reports in the literature indicate that hearing loss early on in life is fairly common in individuals diagnosed with EVA. The hallmark sign of hearing loss caused by EVA includes air-bone gaps with normal tympanograms, acoustic reflexes and otoacoustic emissions. However, the degree of the hearing loss in patients with EVA can vary from normal to profound and the hearing loss can be fluctuant. Reports suggest that due to the altered fluid flow of the inner ear system, individuals with EVA are more susceptible to trauma-induced hearing loss. In this vein, Noordman et al. (2014) reported that in 30% of cases, a precipitating event was associated with the onset of hearing loss [4].

“Although we only report a small number of patients, the impedance of the auditory system appears to be altered in EVA, similar to the patients with SCD.”

Just as hearing loss is prevalent in individuals with EVA, vestibular impairment has also been reported to be fairly common in this patient population. Zalewski et al. 2015 reported that 45% of their 106 patients had vestibular signs and symptoms. In this regard, the audiologist is well positioned to identify patients with suspected EVA [5]. Much like the variable nature of the auditory signs and symptoms associated with EVA, reports citing vestibular function in individuals with EVA also vary widely. 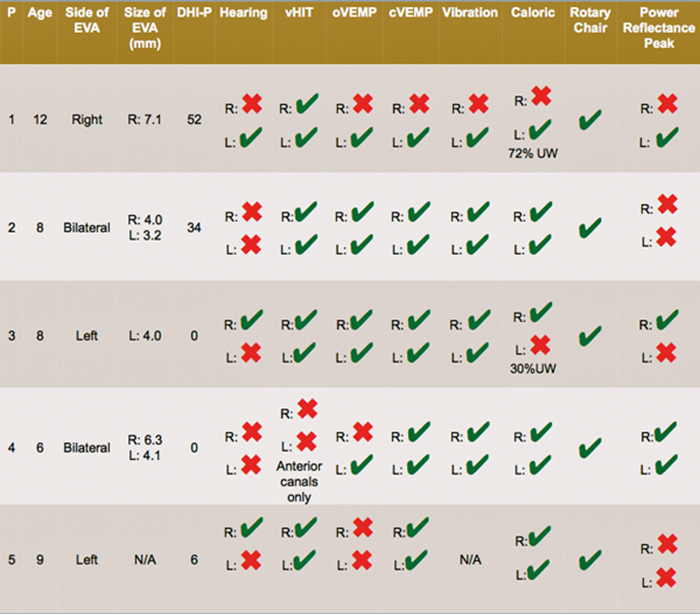 Our laboratory’s findings were consistent with previous reports in the literature that documented the high variability in quantitative hearing and balance testing. A summary of the results of each participant can be seen in Table 1. As shown in this table, participant reports of dizziness as quantified through the Pediatric Dizziness Handicap Inventory for Caregivers (DHI-PC) and tests of vestibular function varied. For example, participant 2 presented with dizziness and balance concerns, yet all balance function testing yielded results within normal limits. Conversely, participant 3 did not report any concerns with balance, yet the child yielded a unilateral weakness on bithermal caloric irrigations (Figure 3).

One of the unexpected findings was consistently abnormal power reflectance (PR) measures obtained with wideband acoustic immittance testing. PR is a measure of multi-frequency tympanometry that may offer better understanding of EVA. In a recent study, Merchant and colleagues (2014) used wideband acoustic immittance to measure power reflectance in individuals with SCD [6]. The investigators reported that a 1000 Hz peak was present in the majority of individuals with SCD, which is not typically present in people without SCD. The altered pattern of wideband immittance was suggested to be the result of the physiologic third window phenomenon described and was shown to be 80% to 92% sensitive in discriminating patients with SCD from patients without the disorder. 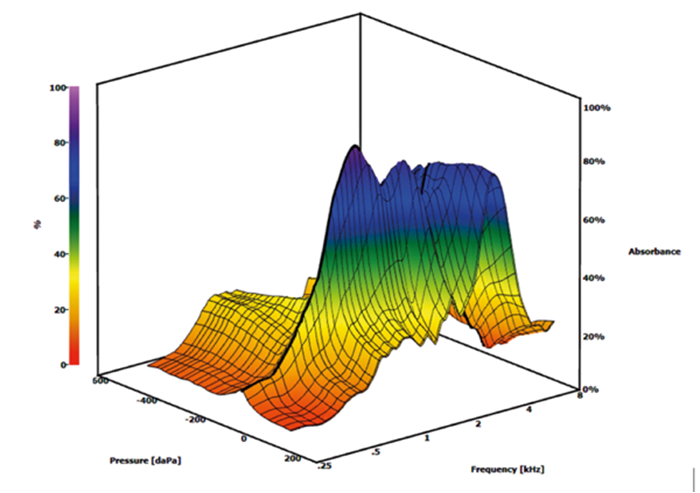 Figure 4: Example of an abnormal peak in absorbance at 1000 Hz in participant 1 on the right side.

Interestingly, when a power reflectance analysis programme was used with parameters similar to the Merchant et al. 2014 study for our participants, a similar peak centred around 1000 Hz was found in nearly all of the ears identified as having EVA (Figure 4). Although we only report a small number of patients, the impedance of the auditory system appears to be altered in EVA, similar to the patients with SCD.

Perhaps one of the most interesting findings thus far from our ongoing study is the need for further informational and personal counselling for the families of patients with EVA. Parents of children with EVA were interested in participating in the study so that they could learn more about what EVA is and what precautions need to be taken for their child’s hearing to remain stable. In the case of EVA, it is difficult to effectively provide clear guidelines for contact precautions and clear-cut answers about the effects of this disorder because of the wide variability in audiologic and vestibular results within this population. Still, the necessity of educating parents and taking the time to answer questions, explain the diagnosis, and provide relevant evidence cannot be underestimated.

A multidisciplinary approach incorporating audiology and otolaryngology is optimal in the diagnosis and management of patients identified with EVA. When both professions work as a team to characterise the unique signs and symptoms presented by each EVA patient, a clinical profile can be generated and the appropriate tests ordered. Most concerning for professionals and parents alike is the progressive nature of hearing and balance dysfunction in patients with EVA. Following a comprehensive assessment, a clear plan for monitoring hearing and vestibular function should be developed. Finally, counselling materials should be provided to parents and families that provide a clear outline of precautions that should be taken to avoid progressive loss of function (e.g. protective head gear and the participation of children in low impact sports).

Declaration of competing interests: Devin McCaslin is an editorial consultant for the American Academy of Audiology.

Dr McCaslin currently serves as an associate professor and associate director of audiology at the Vanderbilt Bill Wilkerson Center in Nashville. He maintains a clinical practice and is an instructor in the both the Doctor of Audiology and PhD programmes. Dr McCaslin’s major academic, clinical and research interests relate to clinical electrophysiology, tinnitus and vestibular assessment. He also serves as the Deputy Editor-in-Chief of the Journal of the American Academy of Audiology and is President-Elect of the American Balance Society.

Bridget Smith is currently a doctoral student in the Audiology programme at Vanderbilt University Medical Center in Nashville, Tennessee. Her main interests in audiology are paediatric diagnostics, rehabilitation and vestibular assessment. She serves as the secretary of Vanderbilt University’s chapter of the Student American Academy of Audiology and serves as the volunteer coordinator and board member of HEAR Nashville, a nonprofit hearing-aid assistance programme. 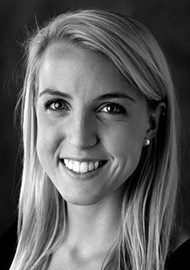 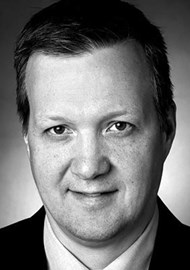