This team of audiologists from Cincinnati Children’s Hospital Medical Centre discuss an eight year old with congenital CMV, a neonatal infection which is usually asymptomatic, and provide guidance on how to recognise the signs in the paediatric population, and screen for vestibular dysfunction.

The effects of congenital cytomegalovirus (CMV) on the brain and auditory system of newborns have been well documented [3]. Vestibular dysfunction due to CMV is less well understood but, nevertheless, exists. Bedside testing and a systematic case history will aid in appropriate referrals for vestibular assessments. Both hearing and balance should be routinely assessed in individuals with congenital CMV.

“Vestibular dysfunction associated with CMV is less recognised, partly due to a child’s inability to describe feelings of imbalance or vertigo, as well as parents mistaking symptoms of imbalance for clumsiness.”

Cytomegalorivus (CMV) is a common herpes simplex virus that can be passed from mothers to babies during pregnancy, affecting 1% of all newborns. The majority (90%) of babies infected with CMV in utero are asymptomatic at birth, but later, about 20% show hearing or vision loss, seizures or other neurologic problems. Symptoms of an active infection at birth include jaundice, petechiae and hepatosplenomegaly. Both asymptomatic and symptomatic infants, however, may later develop health problems or disabilities. Currently, there is no vaccine to prevent CMV, so prevention during pregnancy and antiretroviral treatment in symptomatic infants is important. 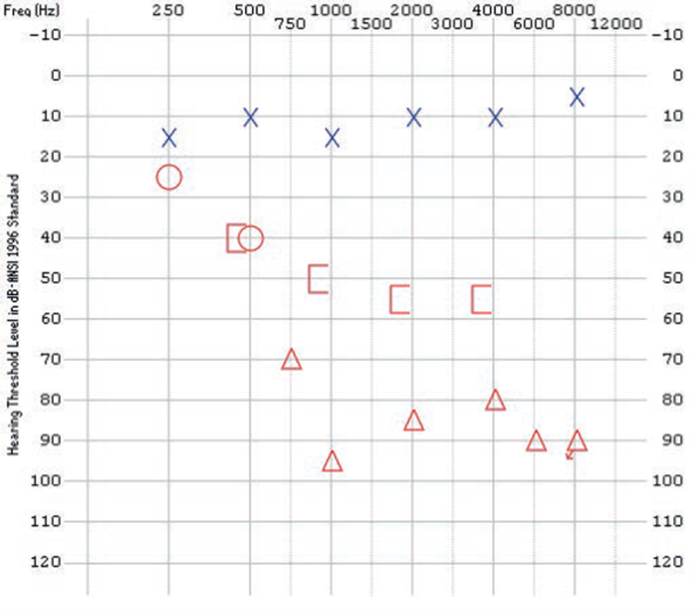 Figure 1: Audiogram of JW at 8.7 years of age indicating mild sloping to profound mixed hearing in loss in the right ear and normal hearing in the left ear.

CMV and the inner ear

“Cytomegalovirus (CMV) is a common herpes simplex virus that can be passed from mothers to babies during pregnancy, affecting 1% of all newborns.” 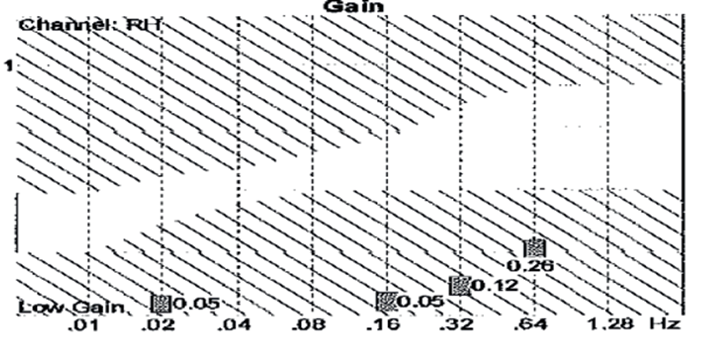 JW is an 8.7 year-old male who was born with congenital CMV. He has cortical visual impairment, developmental delays, cerebral palsy, seizure disorder, muscle weakness and spasticity.

Two years: Follow-up audiology – Normal responses in the sound field and a normal speech awareness threshold was obtained in both ears via insert earphones.

Eight years: A consultation with an otolaryngologist was sought for abnormal gait and balance concerns.

Ocular motor evaluation: Unable to complete due to visual impairment.

Limited positional testing: No nystagmus in the pre caloric and neutral position.

VEMPs: Absent response on the right side with a normal VEMP on the left (Figure 3).

Consistent with a bilateral peripheral weakness.

Vestibular rehabilitation evaluation. Substitution exercises may strengthen the child’s other modalities to compensate for his lack of vestibular input to maintain balance. In addition, counselling regarding environmental modifications, such as well-lit hallways and removal of loose rugs to keep somatosensory input at a maximum will be beneficial.

The importance of obtaining routine hearing evaluations on children with CMV is universally accepted among health professionals. Vestibular dysfunction associated with CMV is less recognised, partly due to a child’s inability to describe feelings of imbalance or vertigo, as well as parents mistaking symptoms of imbalance for clumsiness. Consequently, health care professionals are less inclined to consider balance function when examining a child with CMV. As in the case of JW, however, CMV can become symptomatic through the first decade of life, affecting both hearing and balance.

If a child has a known diagnosis of CMV, the following questions may aid in identifying a potential candidate for vestibular testing. 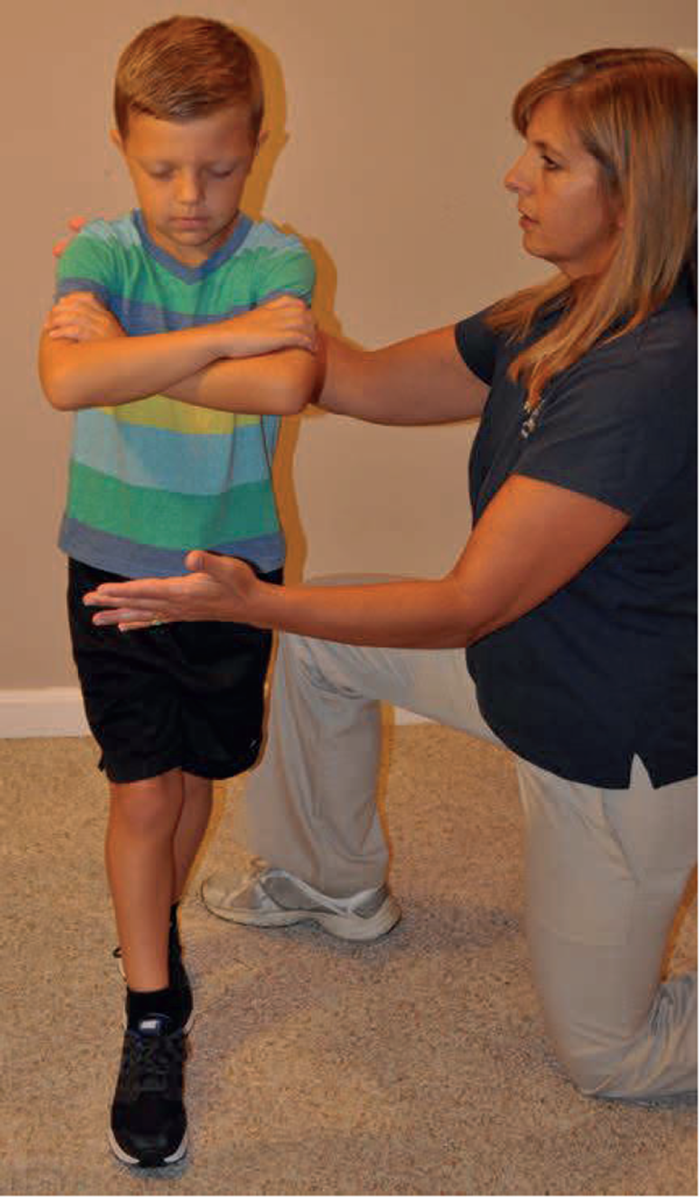 Figure 4 (left): Tandem Romberg. The child is asked to put one foot in front of the other, arms folded, then close eyes. The child should be able to maintain balance for 10 seconds. A fall to one side may indicate vestibular dysfunction. Note: The clinician is protecting the patient in the event of a fall. 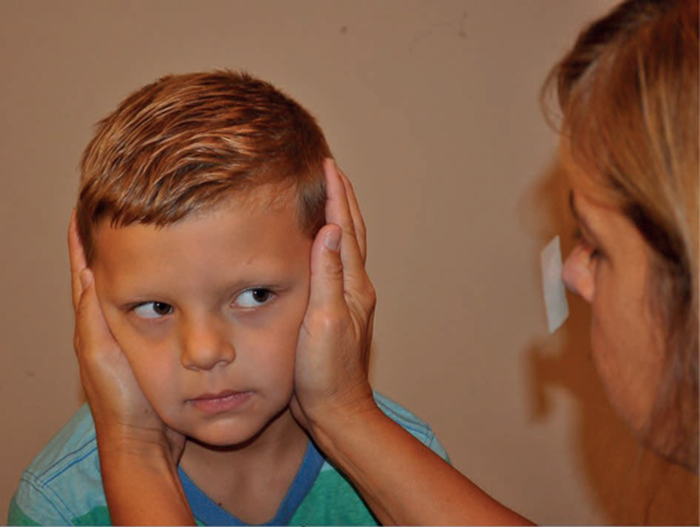 Figure 5 (right): Head impulse test. The child is asked to stare at the sticker on the examiner’s nose while the examiner quickly moves their head to the right and then to the left. The examiner is looking for the child’s ability to maintain gaze on the sticker while the head is in motion. If the eyes move with the head and have to make a jump back to the sticker, this may indicate a peripheral vestibular weakness on the side to which the head was moved.

In addition, there are simple screening tests to supplement the case history that both clinicians and physicians can utilise in their office to determine if a referral for further testing is warranted. The Tandem Romberg (Figure 4) assesses the vestibular spinal reflex and the head impulse test (HIT) (Figure 5) assesses the vestibular ocular reflex (VOR). The combination of these easy to administer assessments in the office will help determine if a complete vestibular evaluation is warranted. 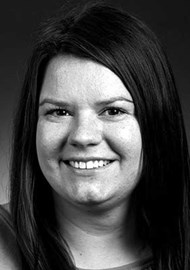 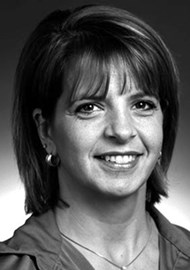 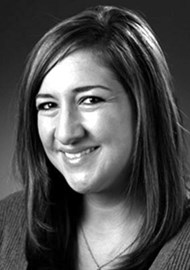