The Outcomes of Children with Hearing Loss (OCHL) study of 300 children with hearing loss has targeted several factors that are under the control of audiologists and parents. Drs McCreery and Walker discuss how these ‘lessons learned’ can lead to better language outcomes.

The OCHL study was a prospective longitudinal research study funded by the US National Institutes of Health. The study was led by Drs Mary Pat Moeller and Bruce Tomblin and included a large team of scientists and clinicians from the Boys Town National Research Hospital, University of Iowa, and University of North Carolina.

The study followed over 300 children who are hard of hearing and a group of children with normal hearing matched for age, nonverbal intelligence, and socioeconomic status. The study recently concluded its 10th and final year of data collection in the summer of 2018. The children and families that participated in the study taught us many important lessons about the impact of hearing loss and amplification on development. 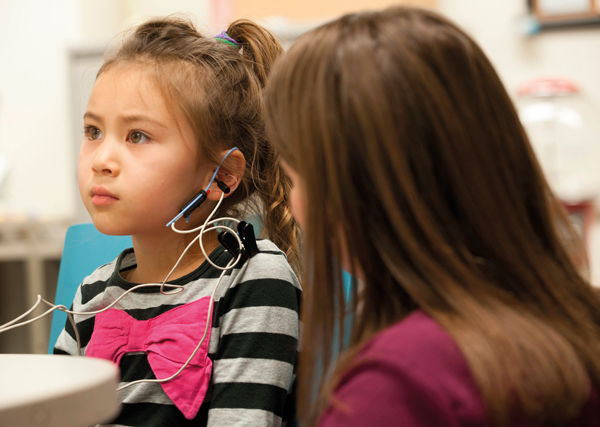 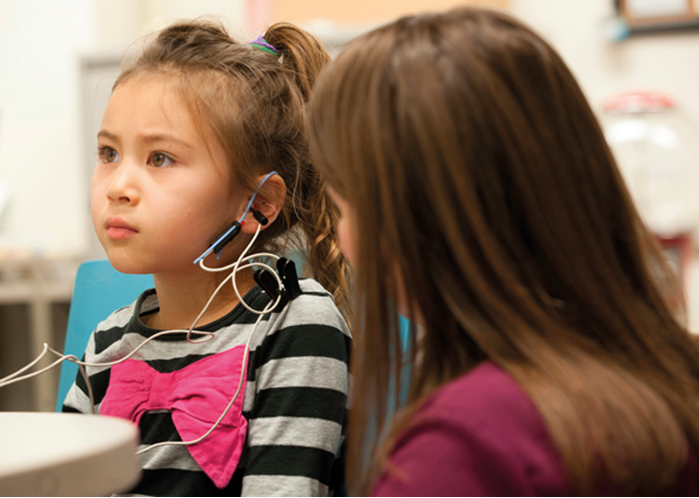 Figure 1. Probe-microphone verification is an important step in the process of fitting children with hearing aids. Measurements of the hearing aid in the child’s ear or in a coupler with the child’s real-ear-to-coupler-difference allow quantification of speech audibility.

Hearing aids for children are not always fitted well

The goal of providing early amplification for children who are hard of hearing is to restore speech audibility. Data from the OCHL study indicate that over half of the children who wore hearing aids in the study had deviations from prescriptive target that averaged more than 5dB across frequencies. One-third of children in the study had hearing aids that did not adequately restore speech audibility for their degree of hearing loss [1]. Audiologists who fit children with hearing aids can address this concern by using validated hearing-aid verification methods.

Infants and young children do not always wear their hearing aids

Even when hearing aids are fitted to restore speech audibility, the benefits of amplification can only be achieved if the hearing aids are worn. Children in the OCHL study varied considerably in the amount of time that they wore their hearing aids [2]. Multiple factors influenced hearing aid use. Younger children, children with milder degrees of hearing loss, and children from less economically advantaged homes wore their hearing aids fewer hours per day on average than peers who were older, had greater degrees of hearing loss, and were from more economically advantaged homes. Audiologists can work with families and early intervention providers to monitor hearing aid use, using either parent report or automated data logging systems in some hearing aids. Parent report or data logging can be used to set goals for hearing aid use and track progress over time.

“One-third of children in the study had hearing aids that did not adequately restore speech audibility for their degree of hearing loss.”

Language abilities were affected by speech audibility and hearing aid use 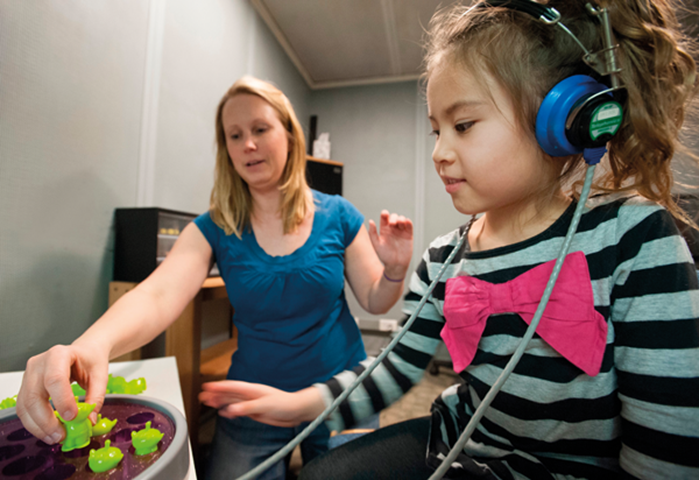 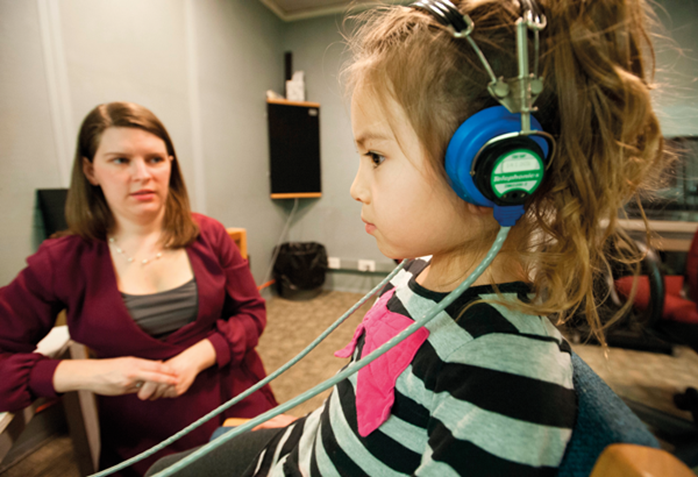 Figure 3. Electronic media, including televisions, tablets, and smart phones, can be a source of background noise in the home. Children with less electronic media exposure in the home had a greater number of conversational turns with adults in their home environments. 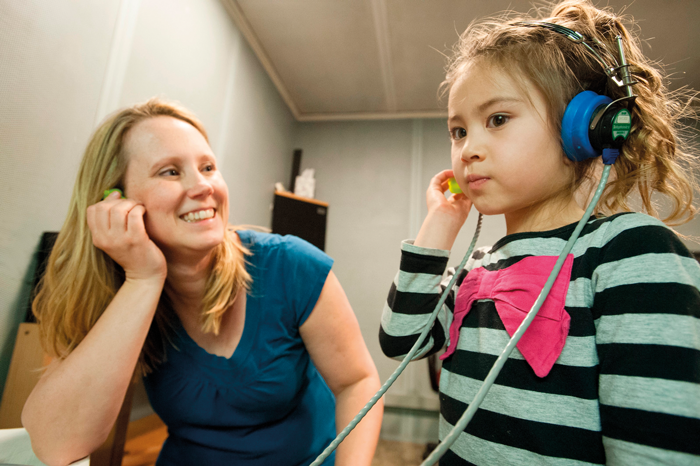 Figure 4. Children who have mild to severe hearing losses are experiencing more favourable outcomes than ever before. Audiologists who serve children with hearing loss and their families can support positive outcomes by using validated verification techniques and supporting consistent hearing aid use.

Language development is enhanced when children have opportunities for conversational interactions with parents and caregivers. Previous studies of typically developing children had demonstrated that electronic media, such as background television, video games, and videos, had a negative impact on language development. For children who are hard of hearing, the effects of electronic media on communication development were assessed using recording from home environments using the Language Environmental Analysis (LENA) system. LENA recordings indicated that children in the study with longer periods of time with electronic media in their recordings had fewer conversational turns with adults in their environment and also poorer language outcomes than peers with more limited electronic media exposure [4]. Professionals should discuss the importance of using expansive language that provides children with opportunities to engage in conversation with adults and also limiting the amount of electronic media exposure in the home as ways to promote better language outcomes in children who have hearing loss.

Future directions for outcomes of children with hearing loss

New findings from the OCHL study will continue to be disseminated over the coming months and years. The continuation of the OCHL study into the school years has allowed for the quantification of many different academic and psycho-social considerations as the children have transitioned to primary school. The team has focused on quantifying academic outcomes in the cohort, as well as the factors that promote risk or resilience as children need their hearing to listen in increasingly complex listening environments. Our team has focused on quantifying the background noise and reverberations levels of the classrooms for children in our cohort. Reports describing the academic and cognitive outcomes for children in the study are also forthcoming. The team has also started to look at variation in early intervention service provision to determine whether specific aspects of the intervention (i.e., intensity, duration, and dosage) are associated with differences in outcomes among children who are hard of hearing.

The OCHL study followed a large cohort of children who are hard of hearing for the past 10 years. The insights gained from the children and their families have shaped the scientific thinking about the impact of hearing loss and audiological intervention on development for children who are hard of hearing. The study has also provided support for the use of validated clinical methods of hearing-aid verification and promoting consistent hearing aid use. The analyses of the data from the study are on-going, and the team is excited to share further developments with various stakeholders, including clinicians, scientists, public policy makers, and children and their families.

Elizabeth Walker has been paid by Phonak for speaking at conferences and has been funded by the National Institutes of Health for research.

This work was supported by grants from the National Institutes of Health (R01DC009560 and R01DC013591). For more information, please visit www.ochlstudy.org 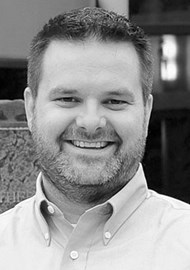 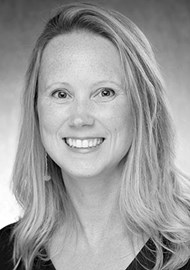