Discrimination of speech sounds is the foundation for development of spoken language. The knowledge gained from being able to objectively document that an infant can discriminate speech while wearing their hearing aids is twofold: 1) over time it could improve paediatric hearing aid fittings and 2) it could improve counselling provided to families. Currently, once hearing aids are fit, there is a wait and see approach to validation, and much of what is used clinically is subjective parent report measures [1]. The use of an objective measure of speech discrimination may increase parental understanding of their child’s hearing loss and the importance of hearing aid use. Specifically, if a parent can see differences in how their infant’s brain responds to speech sounds with versus without hearing aids (see Figure 1), it may lead to improved acceptance and hearing aid use. 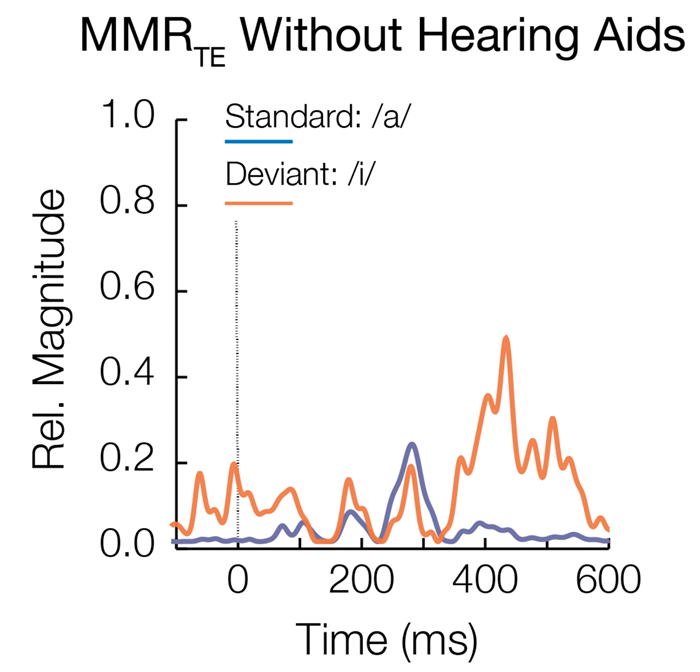 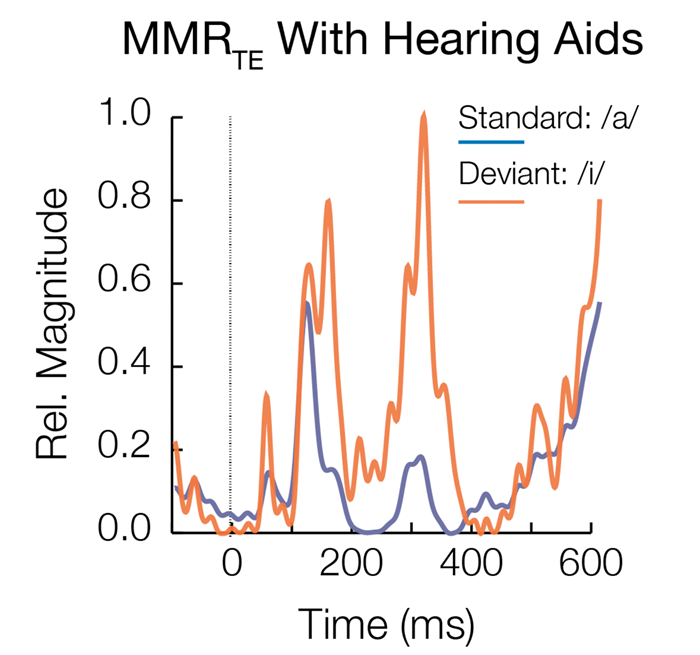 Note. Results for an individual subject with hearing loss illustrating response differences without (left) and with (right) hearing aids. The standard stimulus /a/ illustrated in blue was presented 85% of the time and the deviant stimulus /i/ was presented 15% of the time. In the aided condition the response amplitudes are larger and earlier in latency.

It is critical to assess speech discrimination as quickly as possible after a hearing aid fitting.

Assessing speech discrimination in older children and adults in quiet and in noise is commonly done within the first month of a hearing aid fitting. This starkly contrasts to typical clinical standards for infants. This gap is due to the lack of clinically available tools to assess speech discrimination in infants under six months of age. While protocols exist for assessing speech discrimination in the paediatric population in infants ≥7 months of age, clinical acceptance is currently limited. Most commonly, speech discrimination is not assessed until at least two years of age. This delay in evaluation may lead to two years of auditory input that is inaccurately encoded at the level of the auditory cortex. The addition of a validation tool to the test battery allows clinicians to move beyond using audibility towards a determination of the patient’s ability to detect a difference between different audible speech sounds.

“If a parent can see differences in how their infant’s brain responds to speech sounds with versus without hearing aids, it may lead to improved acceptance and hearing aid use.”

The execution of newborn hearing screening has been broadly accepted and implemented for over 20 years in the United States and Territories. The impact has led to significantly improved outcomes in children with hearing loss compared to outcomes before newborn hearing screening. This evolution has brought about new challenges to audiologists and ENTs. While gains have been made, significant variability in language outcomes still exist in children with hearing loss well into later childhood. It is possible that poorly fitted hearing aids early in life may contribute to poorer language outcomes later in life [2]. The gap in how to assess speech discrimination and the ability of clinicians to benchmark outcomes leads to challenges in clinician expectations and counselling parents.

Our research has focused on addressing this gap in knowledge by developing a tool to validate hearing aids to ensure infants cannot only detect sound, but also discriminate speech sounds, leading to improved outcomes regarding spoken language. While the use of an auditory evoked measure of speech discrimination is not yet ready for clinical use, we have taken several steps to identify and validate a tool in infants with and without hearing loss. With the aim of clinical utility, all testing is done in sleeping infants and can be completed in a similar amount of time to a diagnostic auditory evoked potential evaluation used to diagnose hearing loss.

“The gap in how to assess speech discrimination and the ability of clinicians to benchmark outcomes leads to challenges in clinician expectations and counselling parents.” 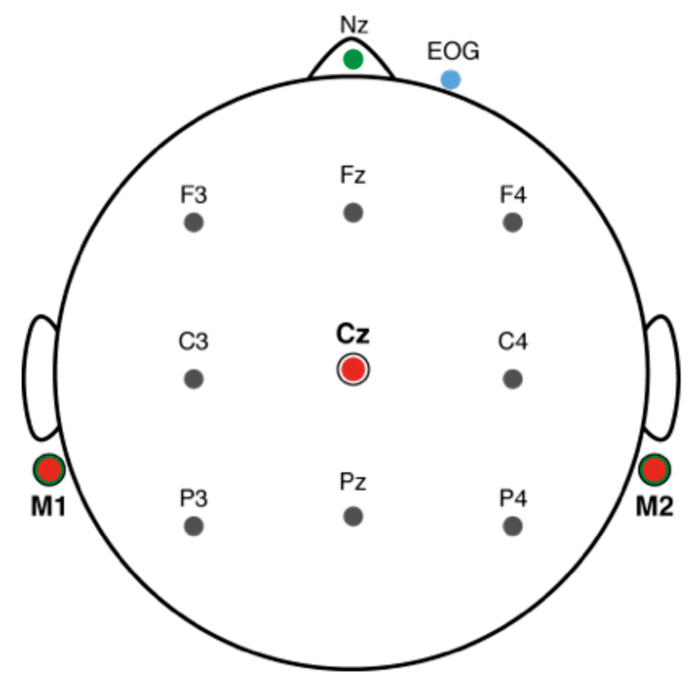 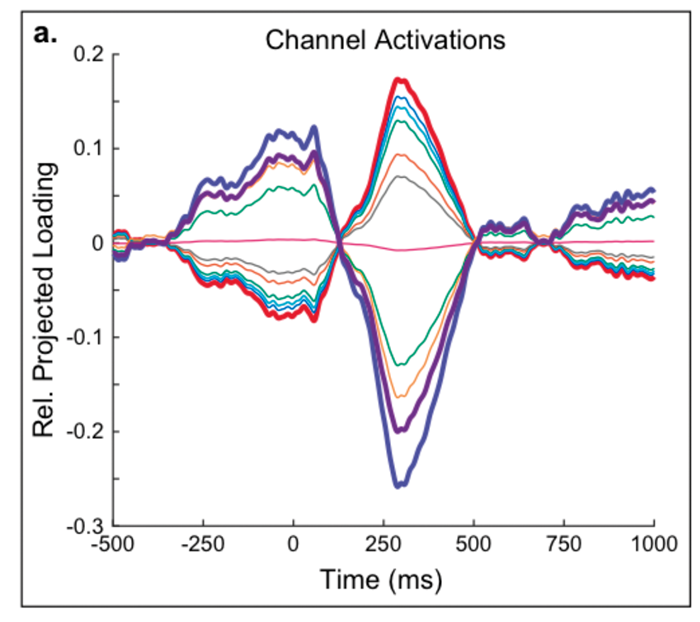 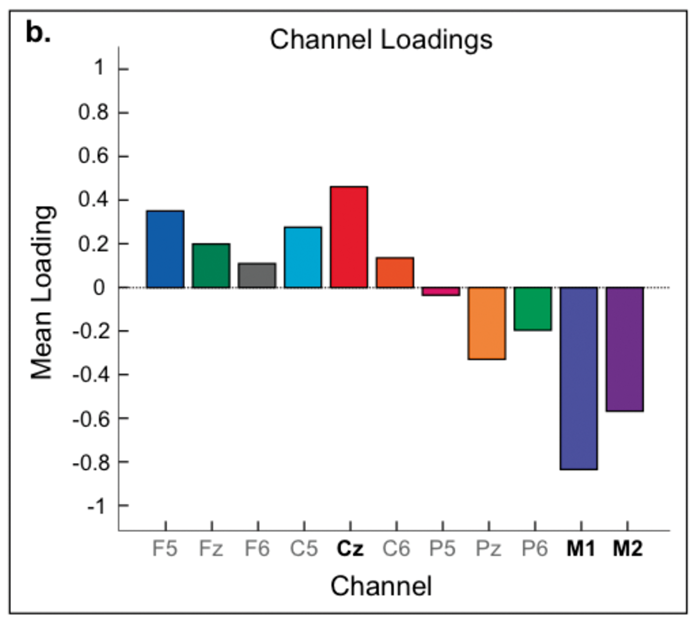 Figure 2. Channel loading to determine if number of electrodes could be reduced.

Using an electrode montage that is similar to that used in clinic based on channel loadings (M1, M2, Cz; see Figure 2) we gathered results in normal hearing infants during a natural sleep state. Our findings in normal hearing infants concur with previous findings for MMR: 1) infants can and do process speech information during sleep; 2) these processes include speech discrimination; and 3) we can observe these processes using advanced EEG analyses [3]. Similar trends have been observed in the infants with hearing loss as well. Recently, we compared two different speech-evoked paradigms, ACC and MMR, again in sleeping infants (n=44). This study examined if speech discrimination results could be obtained in individual infants using ACC and MMR, for different filter settings (i.e. 1-18, 1-30, and 1-40Hz). For each filter setting, we conducted planned comparisons of age, sex, sleep state and randomisation, and there were no significant differences. We found that MMR was present in all individuals for the 1-18Hz filter settings, but the same was not true for ACC. To summarise the results of this study, ACC and MMR can be assessed during sleep, ACC is not sensitive to measuring speech discrimination in sleeping infants, and MMR is sensitive to measuring speech discrimination in individual sleeping infants [4].

This physiologic measure of speech discrimination is being validated with a behavioural measure of infant speech discrimination at seven months of age using the same speech contrasts. Additionally, language outcomes are assessed at 16, 24, 30, and 33 months using a combination of parent report and formal measures of language development. Preliminarily, our results suggest a stronger relationship between MMR and VRISD for consonant-vowel contrasts than for vowel contrasts in infants with normal hearing. There are measurable differences between the aided and unaided responses in infants with hearing loss using the same speech contrast. Additionally, early analyses of parent questionnaires suggest a positive relationship for MMR and later language outcomes. 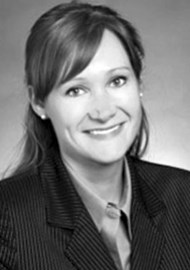