Intuitively, as health professionals, we know that universal newborn hearing screening (UNHS) makes sense. Bolajoko Olusanya outlines how UNHS fits in with global health priorities, as well as illustrating how such programmes can help to deliver additional benefits to communities.

Every year, approximately three to six babies per 1000 live births are likely to have permanent disabling hearing impairment, the majority (at least 85%) of whom reside in developing countries. These infants are at risk of poor motor, language, cognitive and psychosocial development, with profound deleterious impact on their educational and vocational attainment. Universal newborn hearing screening (UNHS) has been demonstrated to be effective in facilitating early detection of such infants in several countries.

In the absence of such a programme, it is unlikely that the affected infants will be detected early enough to put them on the same developmental trajectory with their normal hearing peers, regardless of the quality and intensity of intervention. UNHS has the added benefit of alerting the parents to the special needs of the infants much earlier than would be without UNHS [1]. Furthermore, it can guide the growth and developmental expectations of their children.

National and community efforts to introduce UNHS programmes have been reported in a growing number of countries. A variety of UNHS programmes are established in virtually all developed countries, but remain sparse in developing countries. Globalisation of UNHS is critical to the rapid expansion of this intervention to developing countries, most of which rely on financial and technical support from developed countries and international agencies to implement essential public health programmes.

“Approximately 60% of childhood hearing loss is attributable to preventable causes.”

Hearing impairment is only just beginning to emerge as an important contributor to the global burden of disease architecture [2] and, in addition, the global health perspective of UNHS is unclear to many ear care professionals. This is partly because the potential significance of UNHS beyond the narrow narrative of improved developmental outcomes for the infants remains largely uncharted.

The global health priorities from 2016 to 2030 are encapsulated in the Sustainable Development Goals (SDGs) launched by the United Nations in September 2015 [3]. SDGs identify and seek to address dominant inequalities in specific areas such as health, education, employment and environment. Unlike its precursor - the Millennium Development Goals - the agenda has 17 targets and provides an unprecedented umbrella for addressing the range of factors underpinning childhood disabilities, particularly in developing countries. 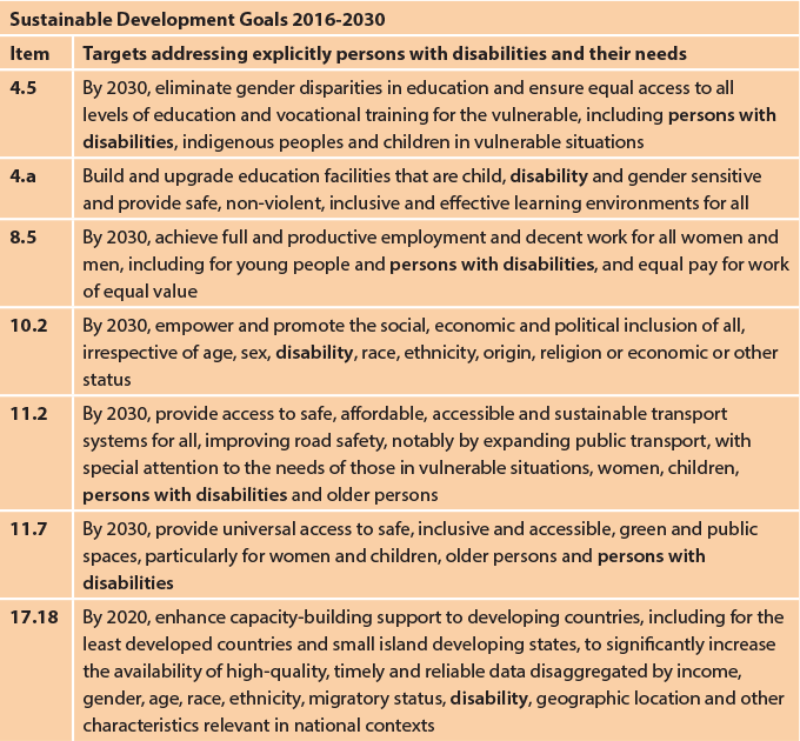 Seven of the targets specifically mention persons with disabilities (education, accessible schools, employment, accessible public spaces and transport, empowerment, inclusion and data disaggregation - see Figure 1). It is unlikely that any public health programmes in developing countries will receive significant international support outside the SDG framework. The challenge then, is how to demonstrate the relevance and benefits of UNHS within the prevailing global health context.

Firstly, the evidence for global health initiatives is based predominantly on estimates from mathematical modelling because of the paucity of population-based data from surveys and research studies. The complexity of this approach makes it unattractive to most healthcare providers and professionals. Unlike most research studies among selected participants, universal screening intervention confers a unique advantage of being able to explore a broader dimension of population health than the primary condition.

In particular, UNHS programmes offer an excellent platform for gaining valuable insights on a variety of maternal and child health statuses in the neonatal period. Experience gained from two pilot UNHS programmes in Nigeria, for example, showed how such programmes can be exploited to gather vital maternal and child health data for the community. The UNHS programmes were conducted between 2005 and 2008 for almost 12,000 infants. All enrolled infants were systematically linked to available perinatal records, while additional infant data, such as anthropometric measurements, was obtained.

A total of 83 infants (approximately seven per 1000 live births) were found to have sensorineural hearing impairment: out of these, two per 1000 live births had severe-to-profound hearing loss. Beyond this primary outcome, an in-depth review of the maternal and infant data from the UNHS programmes also revealed some unexpected key findings in this population. For example: hypertensive disorders in pregnancy; non-elective caesarean delivery; lack of skilled attendants at delivery; microcephaly; and undernutrition, constituted additional risk factors for hearing loss, besides conventional causes such as severe neonatal jaundice, very low birthweight, and birth asphyxia.

Additionally, the UNHS platform provided valuable insights on other adverse perinatal outcomes associated with mode and place of delivery (public or private hospitals, residential homes and traditional maternity homes), adolescent mothers and delayed childbearing after 35 years. UNHS was also found to provide an uncommon opportunity to establish and monitor the nutritional status from birth especially when linked with existing national schedules for routine child immunisation.

Secondly, approximately 60% of childhood hearing loss is attributable to preventable causes [4]. A child with hearing loss, depending on the severity, would require assistive hearing devices that may cost between $150 for hearing aids to $30,000 for cochlear implants, excluding the maintenance costs. Given the substantial economic costs associated with providing functional rehabilitation for children with hearing impairment over a lifetime, it is important also to direct resources at curtailing the incidence and burden of preventable hearing impairment. Primary prevention is the main impetus for global health initiatives.

Based on the findings from UNHS programmes from Nigeria and other developing countries, several initiatives for instance, aimed at improved management of children with severe jaundice have been developed. These include the use of filtered sunlight to treat jaundice in communities where conventional treatment with phototherapy cannot be assured, as well as the development of a simple two-colour icterometer to assist mothers in detecting the onset of jaundice after hospital discharge, thereby facilitating prompt presentation for professional care.

Thirdly, UNHS can be expanded into a broader universal screening programme for other birth defects and neonatal disorders, to optimise the resource investment. For example, a comprehensive early detection and intervention programme for children from birth to age 18 years, targeting a broad range of birth defects, deficiencies, diseases, and developmental delays has been launched by the Indian government [5]. Children diagnosed with illnesses receive follow-up, including surgeries at tertiary level, at no cost under the country’s National Rural Health Mission (NRHM).

The wide age spectrum of the programme has the advantage of providing a safety net for infants who may be missed by newborn screening, such as those with progressive or late-onset disorders. This initiative demands engagement across several medical and non-medical specialties with a shared mission that places the patients’ interest above personal professional. Poor or lack of collaboration among care providers is a frequent barrier to the delivery of optimum hearing healthcare in many countries.

Fourthly, community-based programmes are the cornerstone of global health intervention. UNHS or any newborn screening programmes must provide ready access to infants born within and outside hospitals. Since the technical expertise for such programmes are predominantly in hospitals, a seamless referral system becomes necessary to ensure timely intervention. Pilot programmes are insightful and necessary for developing the scope and structure suitable and most effective for the target population.

In conclusion, UNHS, probably the most popular infant screening programme in the world, offers an opportunity to advance the attainment of SDGs vision for children with disabilities at all levels of prevention and care delivery: primary, secondary and tertiary. As with other disability groups, the International Federation of Otorhinolaryngological Societies (IFOS) should consider a collaboration with other relevant professional bodies, and seize this occasion to draw global attention to the untapped potentials of UNHS. If they do not act now, and appropriately, it’s unlikely any other groups will, successfully. 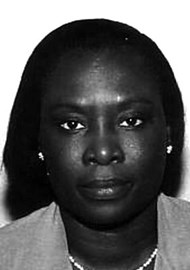