In order to truly understand the many key aspects of acquired sensorineural hearing loss, the role of cochlear synaptopathy or ‘hidden hearing loss’ must be considered. Dan Guo and Sharon Kujawa review and summarise what we know to date, including updates on their current research efforts.

Cochlear synaptopathy is the loss of connections between sensory cells of the cochlea and the neural elements that carry their information to the brain. Recent work shows that it is widespread in noise-damaged and ageing ears. This synaptopathy can be dramatic in ears with intact hair cells and normal audiograms, where it has been called ‘hidden’ hearing loss. Cochlear synaptopathy is also prevalent in ears with varying degrees of hair cell damage and threshold sensitivity loss.

Thus, it may contribute to the well-documented differences in auditory performance among people with similar audiometric patterns of ‘overt’ hearing loss. Here, we present a brief review of cochlear synaptopathy / hidden hearing loss in animal models of two common aetiologies of acquired sensorineural hearing loss in humans – noise and ageing.

Clinicians and auditory neuroscientists have long understood that the inner ear is the major site of damage in acquired sensorineural hearing loss (SNHL). It is here, in the cochlea, where sound-evoked displacements of structures and fluids are transduced into electrochemical signals that are the effective stimulus for the spiral ganglion neurons carrying information toward the brain. Hair cells are key elements in these processes: outer hair cells (OHCs) amplify motion patterns, enhancing the cochlear mechanical response to low-level signals. Inner hair cells (IHCs) serve as conventional sensory receptors in this system, providing ~95% of the hair cell inputs to the auditory nerve. Each of these type 1 spiral ganglion neurons communicates with one IHC using a single synaptic contact.

“Cochlear synapse loss and neurodegeneration appear to be widespread, early events in both noise and ageing.”

Hair cells, particularly OHCs, are vulnerable to insult and thus, are important targets in various aetiologies of acquired SNHL. OHC loss compromises cochlear amplification, elevating thresholds and broadening frequency tuning. After exposure to noise or certain ototoxic drugs, hair cell death can be quite rapid, occurring hours to days after insult. In regions of IHC loss, there can also be delayed and progressive loss of spiral ganglion neurons over months to years. This difference in the apparent time course of hair cell versus neural injury led to the widely accepted view that the hair cells are the primary targets of cochlear insult, with neural loss occurring as a secondary consequence of the loss of their IHC targets. In this view, sensorineural hearing loss is largely, or at least initially, sensory in nature.

Work from our laboratories and others over the last ~10 years, has shown that this is not the case for key causes of acquired sensorineural hearing loss, including noise, ageing and certain ototoxic drugs. As a brief review, our work here began with a series of experiments with another goal; to determine whether noise could have delayed or progressive effects on cochlear structure and function. A prior retrospective study in humans had suggested this was the case [1]. Here, the hypothesis was tested directly in genetically-identical, normally-ageing mice [2]. Animals received a single experimental noise exposure and were then held for months to years with unexposed controls.

OHC-based distortion product otoacoustic emissions (DPOAEs) and neural-based auditory brainstem responses (ABRs) characterised function. Histological assessments focused on counts of hair cells and of the cell bodies of the spiral ganglion neurons that innervate IHCs. Of relevance to this review, the studies revealed a dramatic degeneration of these neurons, without hair cell loss, as animals aged after noise. Given the existing dogma concerning the primary vulnerability of hair cells, this finding was unexpected, and led to a series of investigations into the nature of this primary neural degeneration. 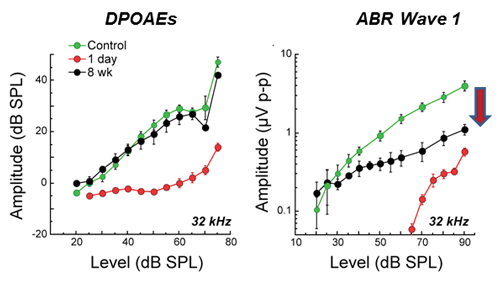 We revisited this issue of noise-induced primary neural degeneration first in ears with temporary threshold shifts without hair cell loss to simplify interpretation [3]. Thresholds recovered by design, as did suprathreshold DPOAEs. However, neural response amplitudes showed persistent and dramatic declines at basal cochlear frequencies, where the acute threshold shifts had been large (Figure 1). Together, these findings suggested that the OHCs in these cochlear regions were functionally intact, but that there was persistent involvement of IHCs, auditory neurons, or their synaptic connections. 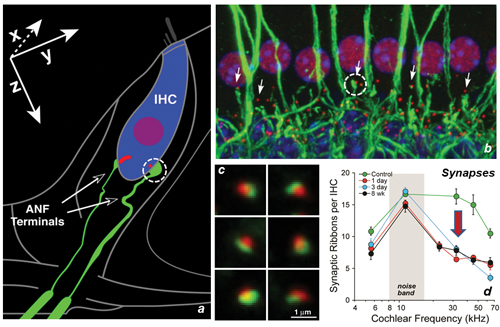 Figure 2. Noise-induced cochlear synaptopathy in the mouse. (a) Schematic of a single IHC with two of its ~20 afferent neurons. (b) Confocal image of tissue stained for anti-neurofilament (green) and anti-CtBP2 (red) to reveal pre- and postsynaptic structures from a basal cochlear IHC region of a control ear; CtBP2 also faintly stains IHC nuclei. (c) High-power views of immunostained synaptic puncta (pre-synaptic ribbons, post-synaptic glutamate receptor patches) as displayed for quantification. (d) Synaptic counts obtained from such images in control versus noise-exposed ears at several post-exposure times. Ears exposed as in Figure 1 [After Kujawa and Liberman, 2009 (3)].

We then studied the histopathological consequences of the exposure in the same ears, looking earlier in time than in the previous series, and expanding our assessment to include quantification of the IHC-afferent fibre synapses. Analysis of the cochlear tissues confirmed that the exposure produced no OHC or IHC loss. However, 24 hours after exposure, dramatic IHC synapse losses of 40-50% were apparent throughout the cochlear base (Figure 2d). Losses were permanent and were proportional in magnitude and cochlear location to the ganglion cell loss observed in the earlier study [2]. Results suggested that this acute interruption of IHC-to-neural synaptic communication set the stage for the neurodegeneration seen at longer post-exposure times. These observations also raise the important point that, although it takes a long time for the ganglion neurons to die, large numbers of neurons are silenced acutely and permanently with the loss of their synaptic connections to the IHCs.

Subsequent studies in the lab have shown that cochlear synaptopathy also precedes hair cell loss and threshold shift in the ears of ageing mice [4], and that a single synaptopathic exposure in youth exacerbates subsequent changes in structure and function as animals age after noise [5]. An electrophysiological study in guinea pigs showed that the same type of noise-induced primary neural degeneration could be seen in a mammal with lower frequency hearing [6, 7] and that the insult targeted the subgroup of cochlear nerve fibres with high thresholds and low spontaneous rates (SRs). This observation helps explain why noise-induced synaptopathy does not elevate thresholds and further suggests that the synaptopathy should contribute to problems hearing in a noisy environment, since, in the normal ear, the low-SR fibers are particularly resistant to continuous noise masking. Thus, cochlear synapse loss and neurodegeneration appear to be widespread, early events in both noise and ageing. In revealing these outcomes, this work has shifted some of the focus back onto the neural component of sensorineural.

“There is a growing body of evidence that cochlear synaptopathy or hidden hearing loss is of major importance to understanding many key aspects of acquired SNHL.”

Although the synaptopathy can be hidden in a normal audiogram, losses can also be widespread in ears with permanently elevated thresholds, with or without hair cell loss [2, 4, 5]. We hypothesise that this ‘mixed’ sensory plus neural involvement is common in numerous aetiologies of acquired SNHL, as it is in noise-induced and age-related hearing loss. It is well documented that two people with similar audiograms can have very different abilities to perform more complex auditory tasks such as speech in noise tests. Differences in the degree of cochlear synaptopathy may contribute to such differences in auditory performance. It is also possible that cochlear synaptopathy can be a key initiator of perceptual anomalies such as tinnitus or hyperacusis by a mechanism in which synaptic gain in auditory central circuits is increased when neural signals from the periphery are attenuated.

These discoveries have important implications for the public health. There is a growing body of evidence that cochlear synaptopathy or hidden hearing loss is of major importance to understanding many key aspects of acquired SNHL. Cochlear synaptopathy has been documented in every mammalian species that has been investigated to date, including mice, guinea pigs, rats, chinchillas, gerbils and non-human primates [8]. Moreover, in human temporal bones, dramatic cochlear synaptopathy and terminal loss was documented in ageing ears with no hair cell loss and no specific otologic disease [9]. The question is no longer whether synaptopathy occurs in acquired SNHL in humans, but rather, under what conditions, and with what consequences to function. Direct knowledge of underlying injury will not be available from the ears of living humans. Ongoing work in our laboratories will continue to clarify mechanisms and manifestations of this loss and apply insights gained from animal studies to the diagnosis and management of cochlear synaptopathy in humans. 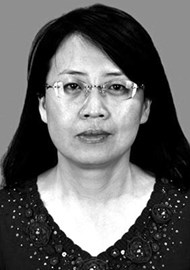 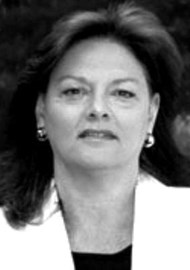