"A merry road, a mazy road, and such as we did tread, The night we went to Birmingham by way of Beachy Head"
By Chris Potter

It’s true, the UK’s premier ENT event has come around quickly this time. So, who better to ‘poke awake’ for an article on the ethos and culture of Birmingham UK, BACO 2020 venue, than the erudite Chris Potter, who’s been swotting up on Birmingham’s canals, medical history, industrial achievements, chocolate bars and egg-free custard?

Is it that time already? Gently snoozing through my supervision of yet another audiovestibular clinic, dreaming blissfully of consecutive DNAs, I was rudely poked awake by the Pinpoint publishing pixie. She wanted another 1200 damn words on BACO, for pity’s sake. Yes, only two years after Manchester 2018 my ENT circadian rhythms are all messed up and here I am tapping away dutifully once more.

Birmingham is a funny old place, you know. With over a million inhabitants and the largest regional economy outside London (equivalent to that of Uruguay), one might expect its rich and varied culture to punch its weight on the international stage. Perhaps its lack of a legendary sporting dynasty or defining musical movement has led to it being overshadowed by the likes of Manchester and Liverpool. Bill Bryson once claimed that the French used the phrase ‘etre de Birmingham’ to signify a dull sense of ennui [1], but my Francophone linguistic advisor has cast aspersions on this interpretation (admittedly a 19-year-old au pair, but he got jolly animated about the whole thing). Even Birmingham City Council seems somewhat unsure of itself, famously printing 360,000 recycling leaflets showing the skyline of Birmingham, Alabama. 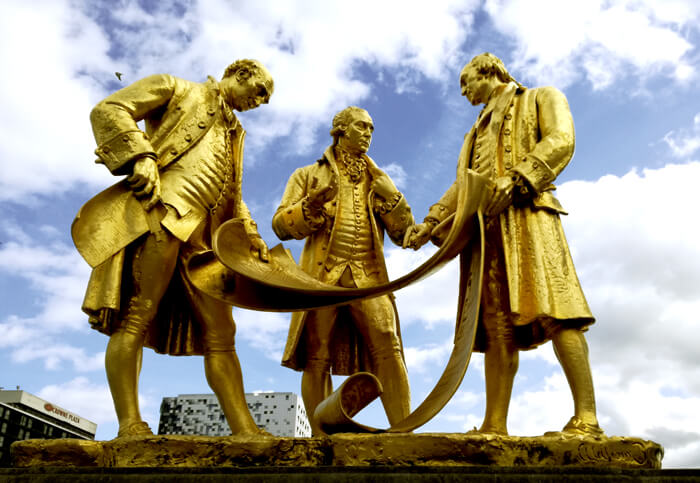 To a child of the 1970s like myself, Birmingham was perhaps not the most alluring of regions. It meant Spaghetti Junction, concrete brutalist architecture, barmy Trotskyite Industrial relations, pub bombings, the ‘Rivers of Blood’ speech, Benny off Crossroads, Jasper Carrott and Brain’s faggots. JRR Tolkien was supposedly inspired by the encroachment of industrialisation onto his leafy surroundings as the small village of Sarehole was swallowed by urban sprawl. It is thought that the steelworks and blast furnaces of the West Midlands inspired his horror of Hobbiton turning into Mordor, and 150 million book sales at the last count.

One feels that Birmingham has too long hidden its light under a bushel and its better side is less obvious to the outside world. Think of great British icons like the Spitfire, the Mini, Cadbury’s Dairy Milk and The Lord of the Rings and one might not immediately make the connection; even Coca-Cola have got a Brummy as their CEO.

So let’s ask the big question. What has Birmingham ever done for us? Well, let me pull the big one out of the old golf bag and smash this down the fairway. How about the cradle of the Industrial Revolution (pause for effect)? How do you fancy spending your life grubbing around subsistence strip-farming and whittling like a pauper, dressed in a rude smock with pitchfork and hayseed, looking for all the world like a provincial radiologist?

Probably the most influential gathering of philosophers and scientists of the 18th century gathered in Birmingham on nights with a full moon to ease their late nocturnal journey home, hence the sobriquet, ‘The Lunar Society’. Members varied over the years, but included the likes of Benjamin Franklin, Joseph Priestley, Josiah Wedgewood and William Withering (he of foxglove/digitalis fame). Two of the more prominent members, James Watt and Mathew Boulting, pioneered steam power and assembly-line mass-production techniques respectively, setting up the world’s first factory in Soho, producing buttons and buckles (and later to become the world’s first gaslit building).

“Birmingham has a glorious past and an exciting future, but much of its appeal to the outsider rests on a very English diffidence”

By 1791 Birmingham was the first manufacturing town in the world and, by 1889, had gained city status and the title of the ‘City of a Thousand Trades’, with its environs becoming the workshop of the world. John Wyatt invented the first effective cotton spinning machine, John Boyd Dunlop the pneumatic tyre and John Wright found time away from his busy surgical practice to pioneer the electroplating process. The city became the hub of the world’s first mass transport system, with 174 miles of canals at its peak, shrinking to 35 miles today. In comparison, Venice has a paltry 26 miles, but bangs on about them incessantly. 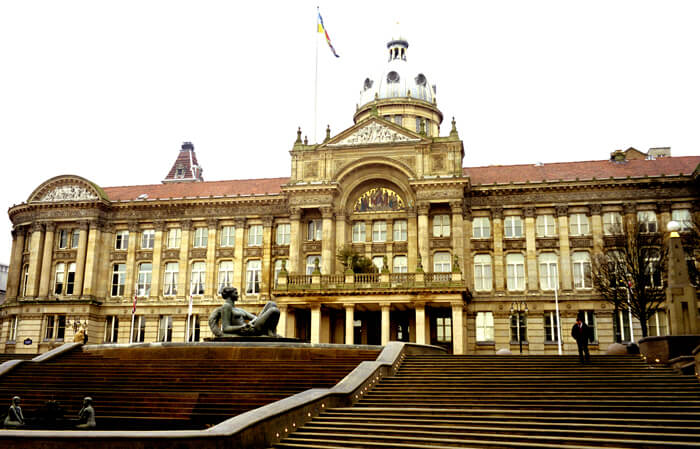 The ‘Floozie in the Jacuzzi’, Victoria Square. (© www.photoeverywhere.co.uk)

The reputation for engineering excellence continued into the 20th century, the Supermarine Spitfire going into production at Castle Bromwich in 1940. In 1959 Alec Issigonis designed the Mini and, by the 1960s, Longbridge was the largest car plant in the world, with about 250,000 workers feeding its production lines. Its decline at the hands of union firebrands and intransigent antediluvian management is a salutary lesson in the history of dysfunctional industrial relations. Our directorate meetings with maxillofacial colleagues seem positively congenial in comparison. The M6 viaduct at Bromford is 3.5 miles long, making it the longest bridge in the UK, although possibly the least glamorous. It terminates at the baffling Gravelly Hill Interchange, better known as Spaghetti Junction, another tribute to the triumph of functionality over artistic merit that seems a feature of pragmatic West Midlanders.

If vice is your thing (or more likely, your trainees’) then there is plenty of scope to go astray, with the UK’s biggest casino and a choice of no less than seven lap dancing clubs. I’m sure the venerable locality organisers were unaware of these facilities and their presence played no part in the decision to host BACO 2020. Speaking of vices, nobody had thought of putting chocolate into a bar until 1897 when the Cadbury factory at Bournville suddenly made dentistry a whole lot more lucrative. The world’s second largest confectionery brand is still there and open for visitors.

A rather more esoteric foodstuff was pioneered by one Alfred Bird in 1837. Legend has it that his wife was allergic to eggs, so Alf developed the world’s first egg-free custard, tormenting generations of school kids with their sickly lumpy goo. The Birds name lives on but the custard factory is now a thriving arts centre. No British breakfast is complete without HP sauce and Typhoo tea, also founded in the city, but if you really want a taste of what Birmingham has to offer, a trip to the Balti triangle is a must. The city’s unique take on curry was invented in 1977 and imitated all over the UK, but the genuine article can only be sampled in this vicinity; it’s bostin’ fittle apparently.

In the medical world, Birmingham boasts Nobel prize-winners such as Maurice Wilkins, John Vane and Peter Medawar. Thomas Alcock invented the plaster cast in 1854 and soon thereafter, Sampson Gamgee invented his absorbent surgical dressing (along the way inspiring a young JRR Tolkien). The first clinical X-ray was performed by John Hall-Edwards in 1896 (naturally a surgeon, all other specialities are basically mere off-shoots). Many surgical colossi with names like Sir Thomas Chavasse, Sir Gilbert Barling and Lawson Tait also bestrode the city’s hospitals and the Birmingham Medical Institute continues to dispense first-rate postgraduate medical education and entertainment.

Birmingham has a glorious past and an exciting future, but much of its appeal to the outsider rests on a very English diffidence, an unwillingness to brag or make a fuss. The self-reliant, self-deprecating Brummie shows a humility rare in the modern world, often epitomising the old British ‘stiff upper lip’ stereotype. Their civic pride is there all right (and there is indeed much to be proud of), but there is also an ever-present gentleness and wry self-awareness often lacking in metropolitan types. The city that brought you Ozzy Osbourne, Tiswas and Bullseye (you can’t beat a bit of BACO) also boasts AE Housman, the largest collection of Pre-Raphaelite paintings in the world and a Symphony Orchestra founded by Elgar. And if that wasn’t enough, the UK festive season has an undoubtedly Midlands voice, thanks to Slade! Merry Christmas readers, and best wishes for BACO 2020.