The implantable hearing device market has grown significantly over recent years. But as conventional hearing aids improve and cochlear implant candidacy widens, what is the role for active middle ear implants and bone anchored hearing systems, and how should we choose them? Alexander Christian Ryberg and colleagues in Copenhagen give a full run-down of options, indications, advantages and disadvantages of these exciting devices.

Implantable hearing systems are a diverse range of devices which can broadly be categorised into three groups: active middle ear implants, bone-anchored hearing systems and cochlear implants. These hearing implant systems can be used in patients suffering from hearing loss, who either do not benefit sufficiently from conventional hearing aids or cannot use these (e.g. chronic otitis externa, anotia).

Bone-anchored hearing systems (BAHS) work through bone conduction, while active middle ear implants (AMEI) most often work through amplification of the vibration of the ossicles. BAHS and AMEI can be used in the treatment of moderate to severe conductive, sensorineural or mixed hearing loss, but not in severe to profound sensorineural hearing loss, when a cochlear implant may be indicated.

Active middle ear implants (AMEI) function by the transmission of electric signals from a sound processor to the middle ear. In the middle ear, the signal is converted into mechanical vibrations against the sound conduction apparatus or directly against the cochlea. AMEI can be further categorised as partially implantable or fully implantable [1]. Partially implantable AMEI are the most common type and exist in several different forms. The most widely used implant requires a mastoidectomy, after which a vibrating transducer is fixed to one of the ossicles (typically the incus) or against the round window of the cochlea [2]. 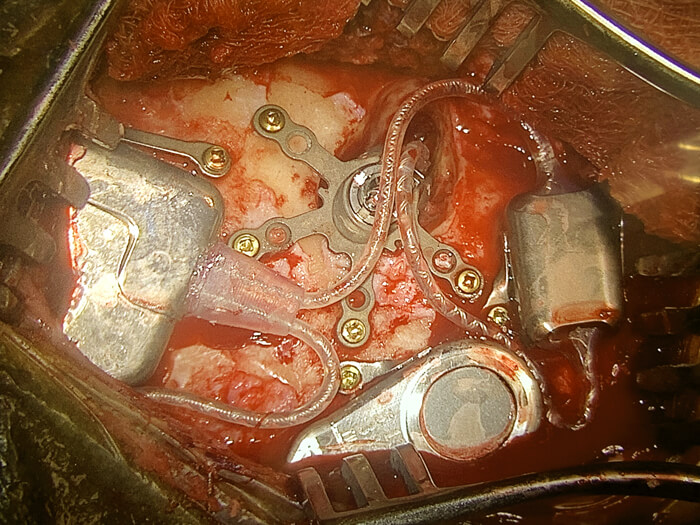 A wire connects the transducer to a sound receiver fitted into recess drilled in the bone behind the ear. After the skin has healed over the implant, an external sound processor can be attached, held in place by magnetic force between the two components. In fully implantable AMEI, all components are implanted underneath the skin (see Figure 1). This provides a hearing aid that does not need removal during sports, showering, sleep etc. Disadvantages include skin dampening of sound transmission and amplification of internal sounds. Batteries need to be replaced surgically after 10-15 years.

Bone conduction denotes transmission of sound in the form of mechanical vibration through the skull. Such vibrations will reach the inner ear, where the resulting oscillation in the perilymph leads to the perception of sound. Thus, BAHS bypasses the normal sound conduction structures (the external auditory canal, tympanic membrane, ossicles) and are therefore effective in the treatment of conductive or mixed hearing loss. Common examples of such conditions include a disruption or fixation of the ossicular chain, external auditory canal atresia and chronic infection of the external auditory canal. BAHS are also an option in the treatment of single-sided deafness; whilst not providing binaural hearing they abolish the head shadow effect. BAHS are categorised by transmission as active or passive and by implantation method as percutaneous or transcutaneous [1].

Percutaneous BAHS make up the majority of BAHS and consist of an implant (a titanium screw), in the cortical bone, and an attached abutment which allows attachment of an external sound processor. The external sound processor transforms and amplifies acoustic signals into vibrations, which reach the inner ear through the abutment and implant. This transmission is categorised as active, as vibrations are transmitted directly to the skull.

In transcutaneous BAHS, the abutment is replaced by an internal and external magnet, allowing for skin closure with the implant and internal magnet underneath the skin. When the skin has healed, the external magnet and sound processor can be attached. This transmission is categorised as passive, as the vibrations generated by the external sound processor are transmitted through the skin before reaching the implant and bone. Despite good skin contact, the resulting dampening of the vibrations is the most significant disadvantage of passive transcutaneous BAHS over percutaneous BAHS (a loss of 5-15dB, worst in the high frequencies [3]). Advantages include lower risk of skin infection and irritation, as well as an invisible solution when the sound processor is not attached.

Some newer implants aim to combine the advantages of traditional percutaneous and transcutaneous BAHS by combining an external sound processor with a more complex implant in the mastoid (requiring a drilled recess in the bone). In these, the digital sound signal generated by the sound processor is transmitted transcutaneously while the vibration is generated by the implant directly (actively) against the skull. Although such active transcutaneous BAHS have shown good objective results and high patient satisfaction [4], these implants are not as widespread as the percutaneous solution, primarily due to higher costs, more invasive surgery and lack of long-term studies on the effect and expected lifetime of the implants.

Candidates for a BAHS can try bone conduction before implantation by using an elastic headband fitted with an attached processor, or an adhesive bone conductor. If the patient is satisfied, an even better result is to be expected with an implant. Figure 2 illustrates a partially implantable AMEI and the different types of BAHS. 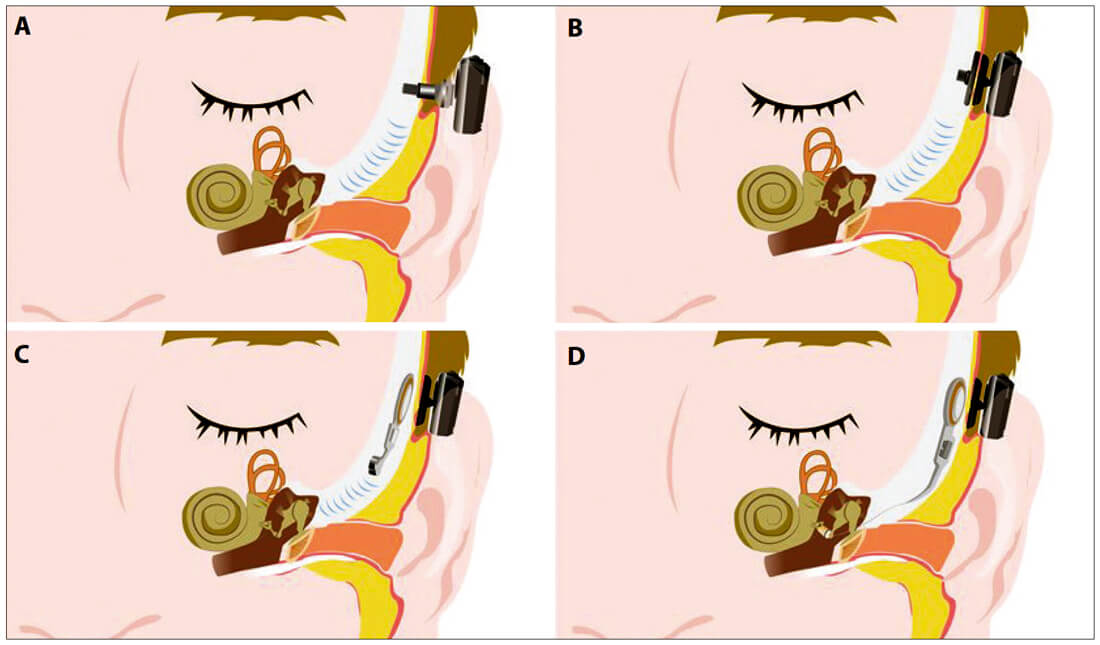 Percutaneous BAHS provide significant hearing improvement with minimal surgery and few complications and, as no skin dampening occurs, the percutaneous solution can be used to treat more severe hearing losses, as compared to the transcutaneous BAHS, whereas the latter provide a more discreet treatment option with lower risk of skin infection.

As conventional hearing aids improve, the audiological spectrum of indication for AMEI in cases of sensorineural hearing loss has narrowed, although remaining a viable option in moderately severe hearing losses. Fully implantable AMEI provide few if any audiological benefits over conventional hearing aids, which in turn are non-invasive, cheaper and easier to replace. They may however be a good solution in selected cases, and future improvements of the implant microphone may compensate for the skin dampening of sound, leading to expanded indications.

Comparative research in this field is limited for a number of reasons. Problematic issues include only partially overlapping audiological spectrum of indication, small sample sizes and variability of pathology, variable availability of the implants, differences in local surgical and technical expertise, variability in surgical technique, as well as the continuously improving implants and especially sound processors. However, several papers do show significant hearing improvements in patients replacing a conventional hearing aid with a hearing implant [5].

Conventional hearing aids can be used in the treatment of the majority of patients with hearing loss, but in cases of insufficient hearing improvement or in specific conditions, hearing implants are an effective treatment option. Among these, bone-anchored hearing systems may be chosen for conductive and mixed hearing loss, while active middle ear implants are usually chosen for treatment of sensorineural hearing loss. Comparative studies are needed in order to establish the benefits between the different types of implants, within the different types of hearing loss. 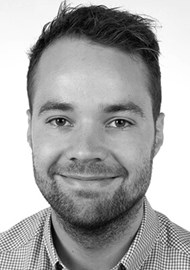 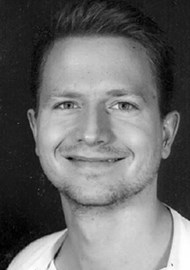 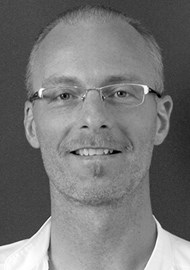