Anaesthesia under fire
By Kate Prior

Kate Prior is an anaesthetist who has, quite literally, been there, done that. In this article she manages to use words on a page to bring to life some of the conditions and challenges she faced as a member of the Medical Emergency Response Team (MERT) operating on a Chinook in Afghanistan during the recent conflict. This description of extreme airway management is incredible and reinforces how lucky soldiers across the world are to have military medics supporting them.

It was the best of times, it was the worst of times, to misappropriate the opening line of A Tale of Two Cities by Charles Dickens. I think any member of Her Majesty’s Armed Forces who experienced a deployment to Afghanistan to support UK troops and our allies on Operation HERRICK will remember the highs of saving a life and the absolute lows when we couldn’t.

It was certainly the most challenging medicine I’ve ever done. It’s not often in my normal NHS work as a consultant anaesthetist working in a major trauma centre that I actually save a life or that someone does their very best to die on me. Afghanistan was exactly that multiple times a day, day in and day out. Of my three deployments, I worked in the hospital for one and the other two were working as the Medical Officer on the Medical Emergency Response Team (MERT) and this is what I’m going to concentrate on in this article. 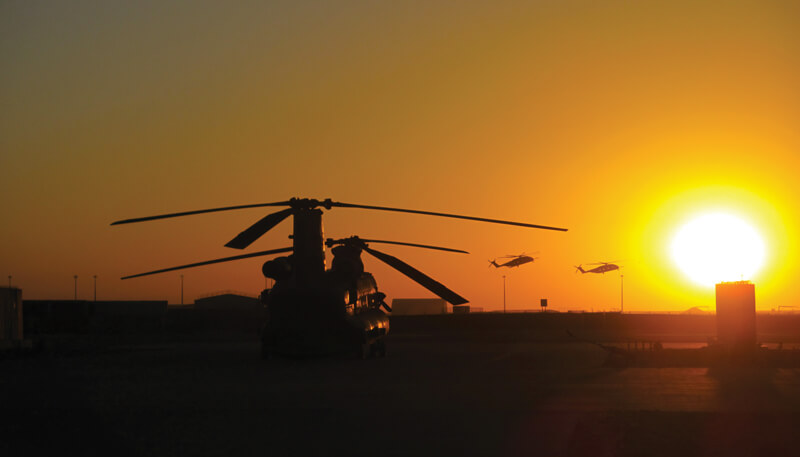 The MERT Chinook on the flightline at sunrise.

The MERT in Afghanistan was a four-person team consisting of a doctor (a senior registrar or consultant in anaesthetics or emergency medicine), an emergency nurse and two paramedics who flew out to the frontline in a Royal Air Force Chinook helicopter to pick up the most seriously injured casualties. Unlike many HEMS set-ups, the helicopter spent very little time on the ground and patients were treated en route rather than at the scene and damage control resuscitation started in the back of the aircraft as the helicopter flew back to the UK Role 3 Hospital at Camp Bastion in Helmand province. 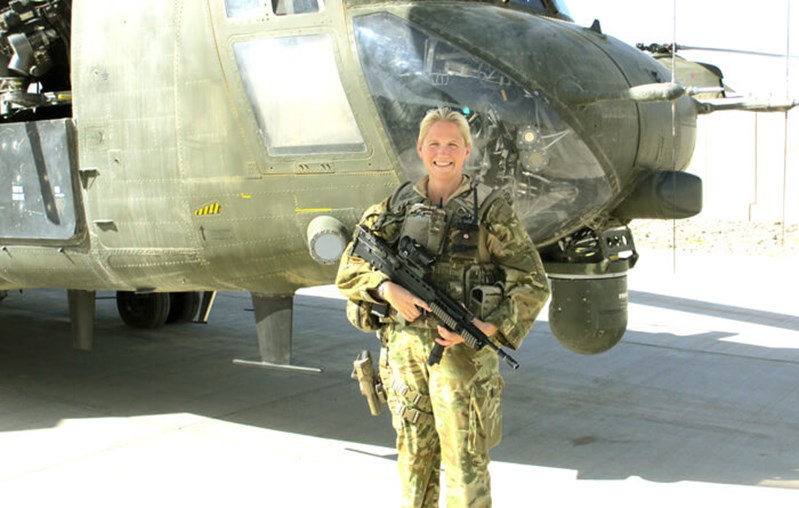 Kate Prior whilst deployed. 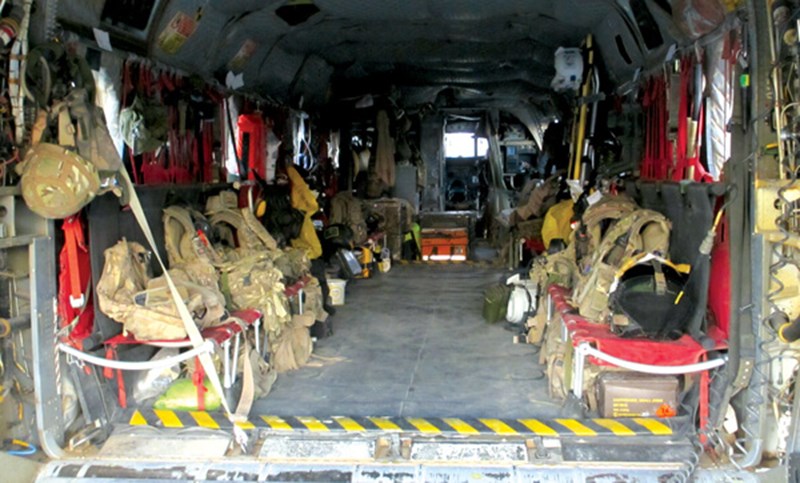 Looking into the back of the aircraft from the loading ramp. The space in the middle is where we would put the stretcher down if there was only one patient to allow us 360-degree access.

The working environment in the back of the Chinook was not without challenges. My normal clean, quiet anaesthetic room or operating theatre with all the equipment and people to make managing an airway as straightforward as possible was a couple of thousand miles away. The Chinook was either too hot or too cold depending on the season; the interior of a helicopter that’s been sitting in the blazing sun of an Afghan summer all day will reach over 60°C. It moves, particularly if the pilots are flying tactically to take evasive action. It vibrates, especially at higher speeds; the pilots would ask if we wanted to go fast or smooth and the answer was almost always fast. We were working in full body armour and helmets, which added significant weight and made moving around more cumbersome.

It was noisy and we used our own sign language to communicate with each other as well as Personal Role Radios with noise cancelling headsets. And, yes, the helicopter came under fire. The MERT Chinook was definitely a prized target for the insurgents and it was not unusual to hear rounds dinking off the side of the aircraft as we came in to or launched from the landing site. Bullets from small arms fire sound like pebbles being thrown against a window. Fortunately, whilst several of the MERT aircraft sustained damage from incoming fire, no helicopter was brought down.

On landing at the location where the casualties were waiting for us, one of the paramedics would get off the aircraft to take handover from the team on the ground who’d been looking after the casualties. There is absolutely no doubt that the immediate first aid, known as buddy care, provided at the point of wounding started the process of saving lives. The paramedic would rapidly devise a loading plan and supervise the stretcher-bearers to ensure the sickest patient loaded first. A rapid assessment took place of all casualties and a plan for priorities was made in a ‘snap brief’ after about 30 seconds. Due to the nature of the injuries commonly seen on Op HERRICK - particularly multiple amputations - the ABCDE assessment with which we are all so familiar was rewritten to start with ‘Big C’ or the control of catastrophic haemorrhage using direct pressure, combat application tourniquets and haemostatic dressings.

There was a clearly defined set of indications for pre-hospital emergency anaesthesia (PHEA) in the back of the aircraft (see Figure 1). There was some significant head and neck trauma from shrapnel from bomb blasts and gunshot wounds. Any patients requiring an anaesthetic were pre-oxygenated using a Hudson mask with a reservoir attached to high flow oxygen prior to rapid sequence induction. All patients were intubated over a bougie and confirmation of tube placement was carried out whilst ventilating using an AMBU bag attached to oxygen. Both clinical confirmation of chest rise and fall and two measures of end-tidal CO2 were used e.g. a number on the EMMA and the presence of a sustained waveform on the monitor. There was absolutely no place for a stethoscope to listen for breath sounds as it was completely impractical. Once tube placement was confirmed, the patient would be ventilated using an Oxylog 1000 ventilator. 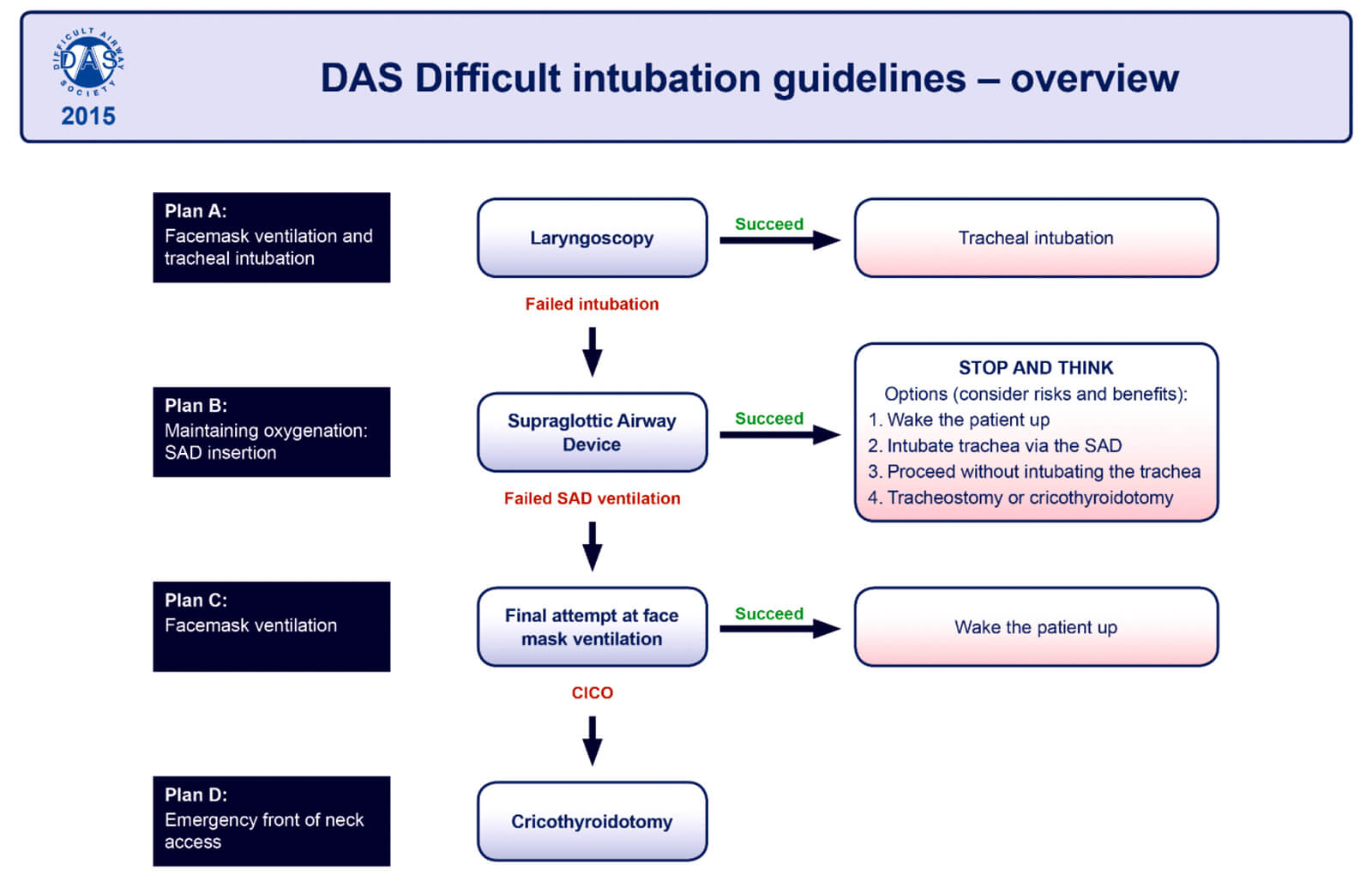 The airway equipment carried on board was not extensive: simple adjuncts i.e. OPAs and NPAs, laryngoscopes with Mac blades of varying sizes, endotracheal tubes, supraglottic airways (Igel) and the Airtraq for difficult airways along with a specially put-together surgical airway kit of scalpel, tracheal dilators and a size 6.0 cuffed endotracheal tube. It was very much a case of doing the basics well and following the algorithm from the Difficult Airway Society (see Figure 2) if the airway wasn’t straightforward, but there was rarely an option to wake the patient up in these emergency situations. The nurse and paramedic were all trained to provide assistance to the doctor doing the intubation and regular training moulages were carried out along with airway drills.

On arrival at Camp Bastion, the casualties were offloaded and taken to the Role 3 hospital with the sickest patient being the last to offload, but the first to be driven to the hospital. A structured ATMIST handover was done and the teams in resus in the emergency department took over. There’d be an opportunity to restock drugs and finish off the paperwork before going back to the flightline to resupply the medical kit in the aircraft, clean up and wait for the next mission.

Whilst this was the most challenging medicine I’ve ever done, it was also some of the most rewarding and it was a joy to be part of a well-trained and high functioning team all working with one common cause – to save lives. 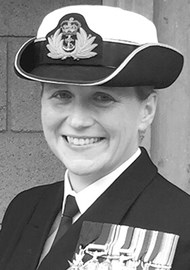