Effects of blast and acoustic trauma: assessment of hearing status on war veterans
By Hamid Jalilvand

Acoustical conditions of the military are often dangerous and there is a real risk of blast trauma and acoustic trauma [1, 2]. Levels of military noises maybe reach up to 125 dBA [3]. Weapons produce instant shock waves (10μs) with high pressure sound levels of 160 dB or 176 dB that are certainly dangerous for the human ear and auditory system [4].

This is very noticeable, but more important than instant high acoustic pressure level, is the effect of blast waves. Explosion of solid materials can produce a peak pressure level greater than the above sounds, which is known as blast wave. Blast wave is two times faster than acoustic noise and its power is ten times stronger than acoustic noise [5]. Blast wave has many effects on bodily organs, for example, it can rupture the eardrum and the ossicular chain of the middle ear easily.

Consequence of exposure in the first phase of blast trauma

Our studies and experience with war veterans indicate that blast wave has more effect on the human auditory system during the first phase of blast or acoustic trauma, in that the impaired person could not hear anything. However, this initial hearing loss depends on the intensity of the trauma; most of our patients say that they could not hear most sounds for at least one to two months. Nevertheless, after a while, their hearing does usually come back. Also, the intense recruitment (which is similar to Hyperacusis) is present, such as suffer buzzers even with normal levels of voices. Hearing loss with recruitment makes hearing difficult for patient.

Intense tinnitus is the second main consequence of exposure to a blast wave. However, tinnitus persists for a long time and sometimes will be present forever. The loudness of tinnitus tends to be high immediately after the blast trauma, but decreases with time.

Our data shows that tinnitus is very common among veterans (92% of cases). The occurrence of tinnitus in both ears is high (average of 80%) and the pitch of tinnitus is related to audiogram configuration, i.e. high pitch for high frequency hearing loss and low pitch for low frequency hearing loss. It indicates that noise induced tinnitus is a result of lack of enough suitable input from the peripheral to the central auditory system. Auditory deprivation causes a high spontaneous rate of activity and synchronisation of neurons in auditory central systems (inferior and auditory cortex). For this reason, the relationship between pattern of hearing loss and tinnitus pitch in acoustic or blast trauma is very high.

It is important to note that there is no significant relationship between the length of time the veteran was serving and the occurrence of tinnitus. This means that exposure to trauma in just a short space of time can cause long-lasting tinnitus. 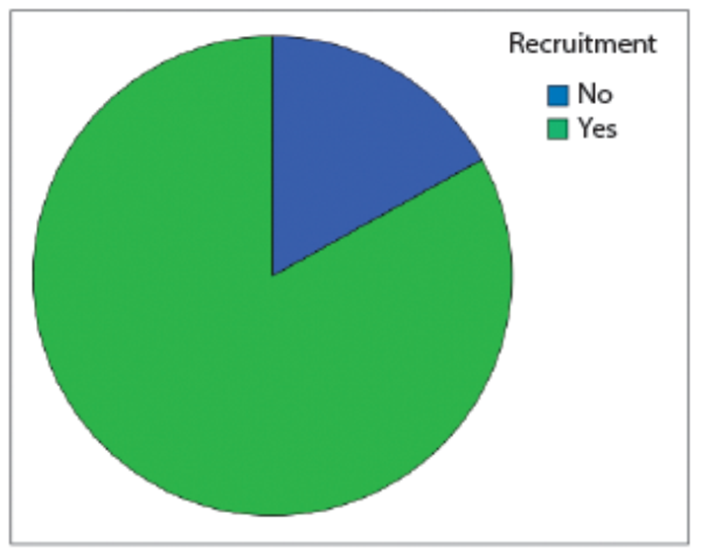 Figure 1: Recruitment is as common as tinnitus among veterans (94% of cases). 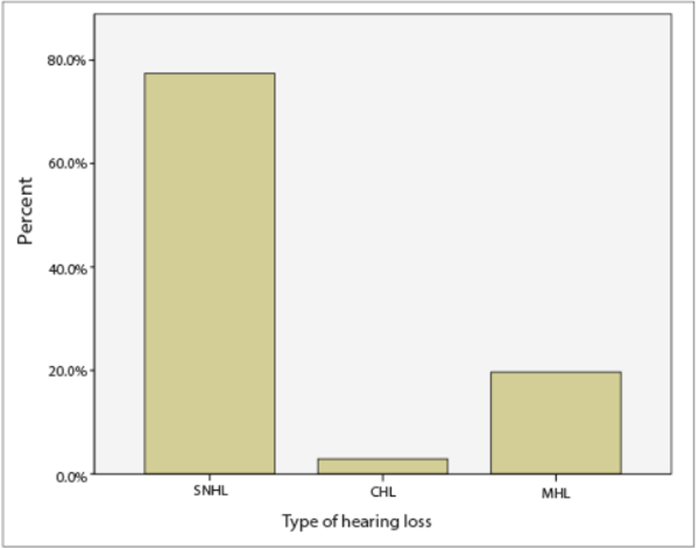 The types of hearing loss among war veterans are different. As shown in Figure 2, sensorineural, mixed and conductive hearing losses are present from high to low rates (nearly 80%, 18% and 2%, respectively). The majority of tympanic membrane perforation is a result of blast wave, rather than acoustic trauma. 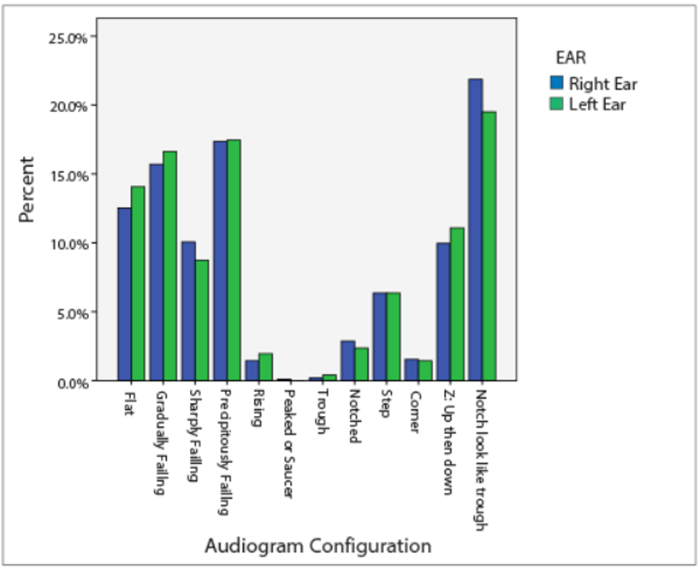 Figure 3: Various types of audiogram patterns in war veterans. The high frequency hearing loss pattern is the most common type.

With regards to patterns of audiogram, there are different configurations (Figure 3). Patterns of high frequency hearing loss are most common.

It is noticeable that the asymmetrical audiogram pattern (in terms of degree, type and pattern of hearing loss) is more common than the symmetrical pattern (70% versus 30% of cases for asymmetrical and symmetrical, respectively). The asymmetry in an audiogram is caused by the effect of head shadow – the near ear is more susceptible than the far ear (Figure 4).

Figure 4: Effect of head shadow for blast wave. Blast trauma is near to left ear and causes more hearing loss.

Sensorineural hearing loss and cochlear impairment in most of the veterans significantly decreased the perception of speech, especially speech in noise (Table 1). This is also related to degree of hearing loss, i.e. the more hearing loss, the less speech perception in noise.

Since the auditory system is impaired by blast or acoustic trauma and the resorbtion of excitatory neurotransmitters is abnormal peripherally [12], the condition of hearing loss is not stable and depends on exposure to noise during daily life. Our data shows that exposure to noise over a short duration can cause more hearing loss, which is not reversible. For instance, in Figure 5, there is an audiogram for a veteran before and after exposure to music. When some veterans with blast trauma are exposed to loud noises during daily life, they experience some dizziness or vertigo. This suggests that there might also be some balance disorder due to blast trauma, which appears over time and with age, and is deteriorated by strong sound triggers.

Figure 5. Before (right side) and after (left side) exposure to noise during music.

Interaction between tinnitus and hearing loss

An interesting note about the interaction between tinnitus and the audiogram is that if tinnitus deteriorates, hearing loss will certainly deteriorate as well in future. In other words, the loudness of tinnitus is a kind of alarm for us about the condition of hearing loss, which helps us during monitoring and treatment.

Rapid changes in air pressure due to blast wave can impair tympanic membrane and middle ear structures. In the early phase of blast trauma, there is probably some middle ear impairment (mostly perforation of tympanic membrane), but because there are some intense injuries to other parts of the body, the injured person may not notice this middle ear impairment. This results in some mixed hearing loss in future that cannot be resolved by medical interventions. The disorder of the middle ear also detriorates over time. Our data shows that acoustic reflexes are abnormal (enhanced reflex thresholds or absent) in nearly 60-70% of cases. Also there is some assymmetry between right and left ear in regards to tympanometry type and acoustic reflexes (45% of cases).

It is interesting to note that dysfunction of the eustachian tube in veterans is most common among veterans with blast trauma. It is predicted that blast wave causes dysfunction of the eustachian tube in some cases. This persists for a long time and has a strong effect on the degree of hearing loss – a difference of 15-20 dB between test sessions. In these cases, the tympanometry type is often C. Typanogram type C, means that there is some negative pressure in the middle ear, has the peak of tympanogram in the negative area and indicates a dysfunction of the middle ear and the eustachian tube. In some of the veterans we used the Toynbee manoeuvre, (letting air inside the mouth while the mouth and nose are closed), to resolve the negative pressure and convert type C tympanometry to type A. The Toynbee manoeuvre also improved hearing thresholds up to 10-15 dB in most cases. 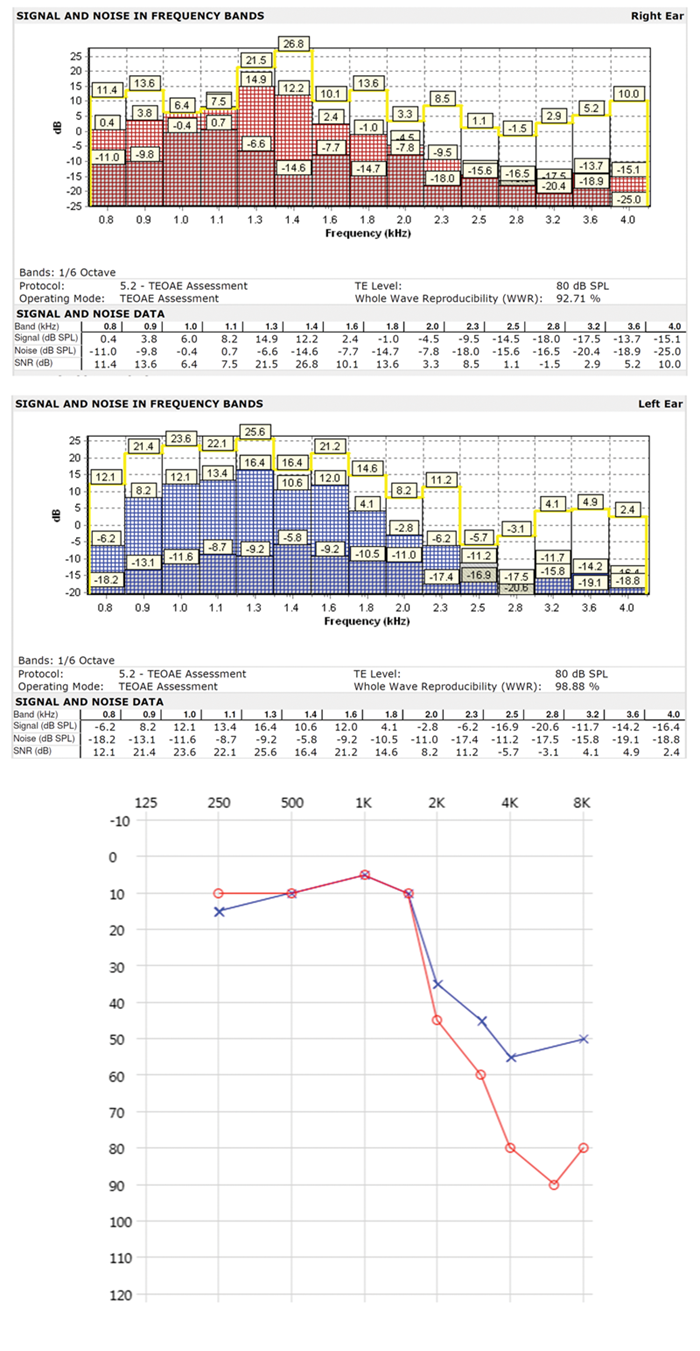 Figure 6: TEOAE in a case of acoustic and blast trauma, which is corresponding to the audiogram configuration. There is not a reliable TEOAE in high frequency ranges.

In line with the above speech in noise results, the fact that transient-evoked otoacoustic emissions (TEOAEs) are not present in nearly all veterans with hearing loss suggests loss of outer hair cells because of blast wave or acoustic trauma. Since the outer hair cells have an important role in frequency resolution and discrimination, especially for exctracting the speech signals from background noise, loss of outer hair cells causes a lower score in speech perception in noise tests. For example, in Figure 6, it can be seen that there is not any reliable TEOAE in high frequency ranges (2 kHz and higher) which is corresponding to audiogram configuration.

In 82% of cases, there is at least one disorder alongside that of the auditory impairment, the most common of which are PTSD, amputation and memory loss. It is notable that PSTD is the most common non-auditory disorder among veterans with auditory disorders (93% of cases). Our data shows that after fitting hearing devices, the severity of PTSD as well as memory loss are significantly decreased. This indicates that hearing devices can be beneficial in restarting some central processing in the brain which helps to reduce the severity of these conditions.

To summarise, acoustic trauma and especially blast trauma affect the peripheral to the central auditory system. They cause anatomical and physiological disorders of the auditory system. Hearing loss, recruitment, tinnitus, hyperacusis, problems with speech intelligibility in noise, PTSD and memory loss are all cosequences of trauma for veterans. Blast trauma has even more serious effects relative to acoustic trauma, as well as for other parts of the body. There are various types of hearing loss, audiogram patterns and hearing disorders caused by blast and acoustic trauma, which all depend on the blast conditions and on how it occurred. 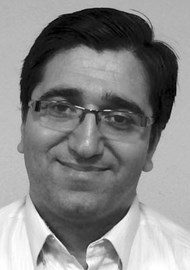