A critical question when any new technique is proposed is ‘does it work?’ In this article Daniele Marchioni and Davide Soloperto discuss the success rates of endoscopic ear surgery for cholesteatoma.

Surgical management of cholesteatoma is still a controversial issue. Classic concepts are based on the traditional classification of open tympanoplasties-canal wall down (CWD) and closed tympanoplasties-canal wall up (CWU), with well-known advantages, disadvantages and results reported in the literature. Starting in the 1990s, operative endoscopy was introduced in otologic surgery and significantly changed anatomic, physiologic and surgical concepts.

Traditional surgery for cholesteatoma of the middle ear is performed by microscopic approaches. In recent years endoscopic instrumentation, techniques and knowledge have greatly improved, and it has become increasingly popular during the last 15 years. Initially used in the otologic field as a tool in adjunct to microscopes for diagnostic purposes [1, 2], the improved image clarity and illumination offered by the endoscope, with the possibility to “look around the corner”, encouraged visualisation of the middle ear cavity through transtympanic or transmastoid routes.

Early studies on its application in middle ear surgery focussed in particular on the anatomy of the tympanic cavity, then its role in cholesteatoma second-look procedures to detect residual or recurrent disease was analysed. Although cholesteatoma surgery primarily aims to eradicate the disease process and provide the patient with a safe and dry ear, the concept of a minimally invasive approach with function preservation is actually of increased importance, especially in children [3]. Currently, even though endoscopic ear surgery is a new technique, it is possible to find some experiences in the literature about results, in which the endoscopic approach is used both exclusively and in combination with microscopic approaches. In a recent systematic review [4], seven studies were found, published between 1994 and 2015 and comprising a total of 515 patients and 517 surgeries overall. 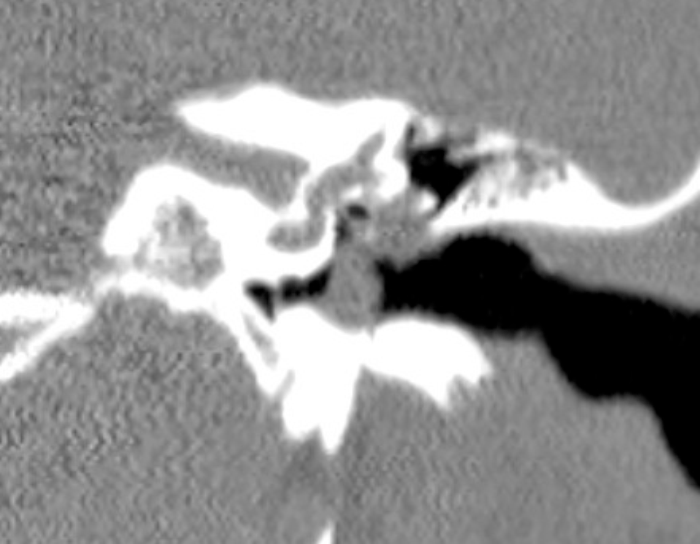 Figure 1. A CT scan showing a middle ear cholestetoma, with ossicular chain involvment.
Note a “type B” subcochlear canaliculus, without cholesteatoma inside.

All articles analysed only patients suffering from middle ear cholesteatoma with no history of previous ear surgeries. The disease status at last control was available in all patients, and the mean follow-up time was 23.4 months (range: 11-43 months). In three reports a transcanal endoscopic exclusive surgery (TEES) was performed, while in the other five a combined technique was also applied, if necessary. Overall, endoscopic exclusive management of the pathology was obtained in 293 (57%) cases, while 224 (43%) operations were performed with a combined technique. 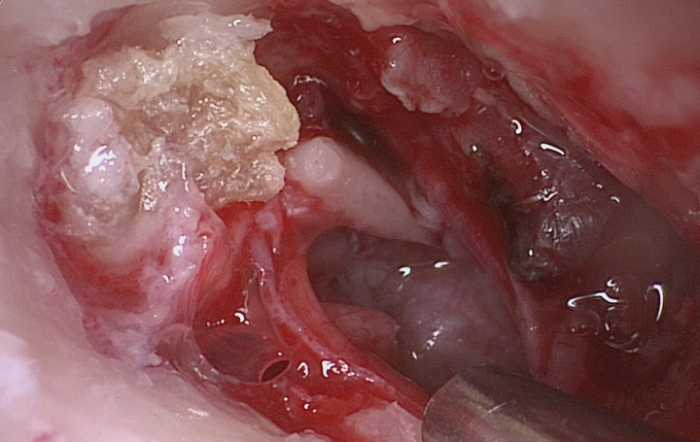 During the follow-up period, a total of 48 patients showed ongoing pathology; in particular, 32 patients had residual disease, while 16 patients presented with a recurrence of cholesteatoma. In a cross-sectional survey study of Canadian otolaryngologists [5], made to evaluate the current usage of the endoscopic ear surgery technique, it was found that 70% (54 participants) used an endoscope in their practice, with a large proportion utilising the endoscope for cholesteatoma or tympanoplasty surgery, even though only 11% had performed more than 50 endoscopic cases. In another systematic review of outcomes following endoscopic middle ear surgery [6], differences between “observational” and “operative” ear surgery were showed. In particular, analysing outcomes of endoscopic “operative” cholesteatoma surgery, 11 publications describing cholesteatoma surgery performed exclusively with an endoscope were identified.

“The preservation of a large amount of healthy mastoid tissue and functional mucosa, avoiding unnecessary mastoidectomies, if the cholesteatoma is limited to the tympanic cavity, is another key aspect of this surgical technique.”

The number of procedures in each article ranged from 14 to 231 procedures,with a wide range of follow-up time, spanning seven months to 43 months. In all studies, the endoscope was found to be a useful tool for cholesteatoma resection; however, many of these studies did not provide robust analysis of follow-up data. The conversion from endoscope to traditional microscope occurred in 0% to 23.8% of procedures. 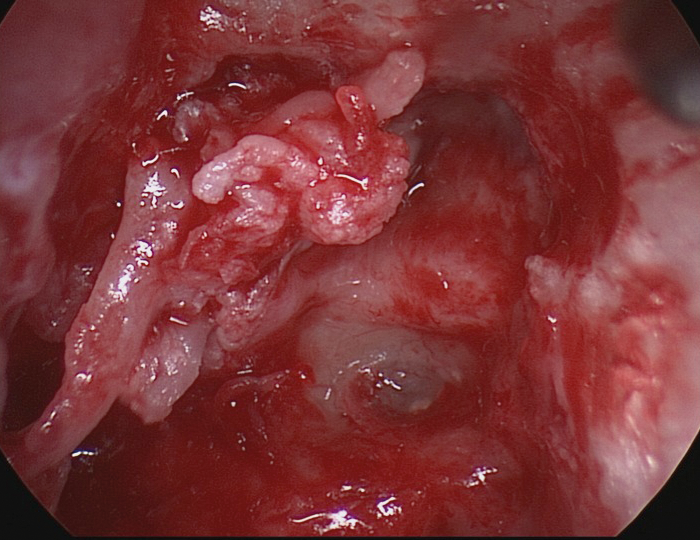 Figure 3 Endoscopic approach for cholesteatoma removal.
The tympanic tract of the facial nerve and platina are well showed. 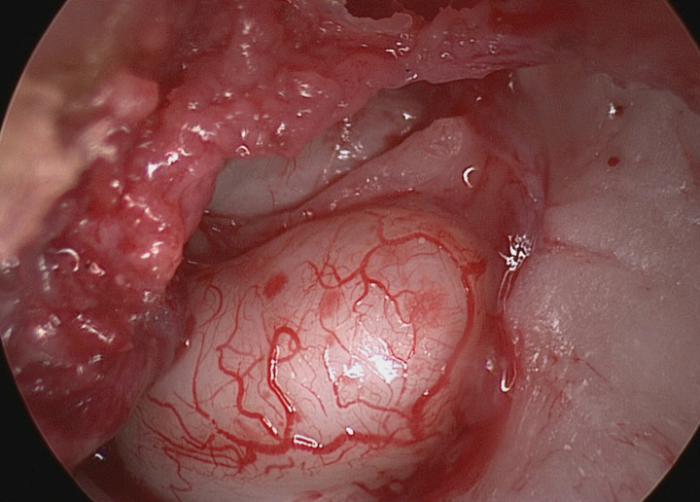 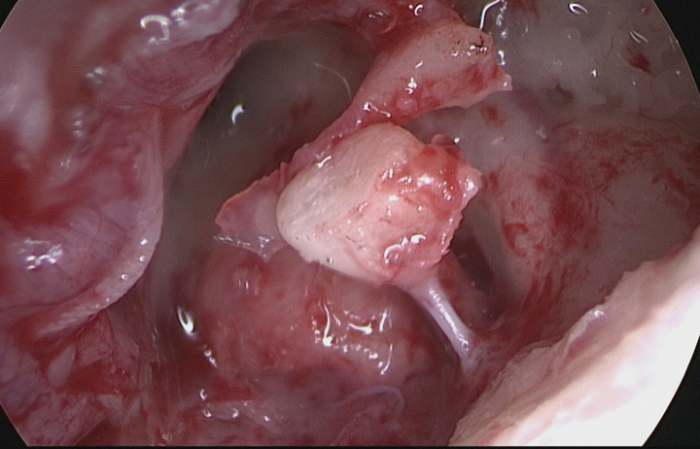 Five articles reported hearing outcomes, but without a significant level of detail, and three reported complications related to a shift in hearing thresholds. In terms of the paediatric population, Marchioni et al. [3] found 54 patients, for 59 affected ears, of which 31 underwent a TEES, while 28 a combined CWU approach, depending on the mastoid involvment. Ossicular chain preservation was possible in 41% of TEES and recurrence was, respectively, 12.9% for a mastoid sparing approach and 17.2% for children with mastoidectomy in CWU, with a mean follow-up period of 36 months. In other experiences, the rate of residual disease was found to be 20% in TEES and 40% in microscopic approach [7] and cholesteatoma was identified endoscopically in 17% of children thought to be microscopically free of disease at initial surgery [8].

With recent advances in minimally-invasive surgery, the use of the endoscope has led to new treatment options for middle ear pathologies, in particular for cholesteatoma, and in the paediatric population. Advantages are primarily related to the ‘‘round-the-corner” view of hidden areas, the magnification of anatomy and its minimal invasivity. The preservation of a large amount of healthy mastoid tissue and functional mucosa, avoiding unnecessary mastoidectomies, if the cholesteatoma is limited to the tympanic cavity, is another key aspect of this surgical technique. Concerning the rates of recurrences and residual disease, based on current data, endoscopic middle ear surgery appears to have similar results in comparison to classic microscopic approaches, with the advantage of performing minimally invasive surgery.

Disadvantages are related to the “one hand” technique, bleeding control and the necessity of an adequate learing curve, but in general, those who were earlier adopters in their practice and / or who had more exposure to endoscopic techniques in their career were more likely to have a positive stance towards endoscopic ear surgery. Limitations related to the studies analysed here are the short period of follow-up and the limited number of patients treated by the authors, although both these issues are closely connected with the recent introduction of endoscopic middle ear surgery.

Endoscopic ear surgery for the treatment of middle ear cholesteatoma represents a promising, feasible, minimally invasive and conservative technique. It permits a “tailored surgery”, depending on several surgical and patient-related factors. Further reports are, of course, still needed to confirm and integrate current data and more studies, especially focussed on long-term results, are essential to definitively standardise this new approach. 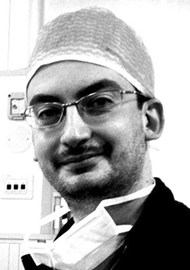 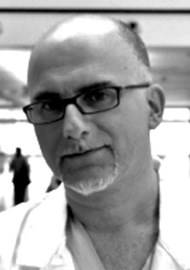