Juggling the demands of elite sport, a boisterous social life on tour and medical academia would seem too much for mere mortals. All in a day’s work for your average Wallaby.

Currently I am a Senior Visiting Medical officer at the new Lady Cilento Children’s Hospital and Mater hospitals in Brisbane as well having a private practice. My special interest is hearing loss and cochlear implants, having performed over 800 CI procedures.

I grew up as the youngest of eight children in a sports obsessed family and coincidentally also had two deaf siblings, one of whom now has a cochlear implant. I believe these things were integral in shaping my future. 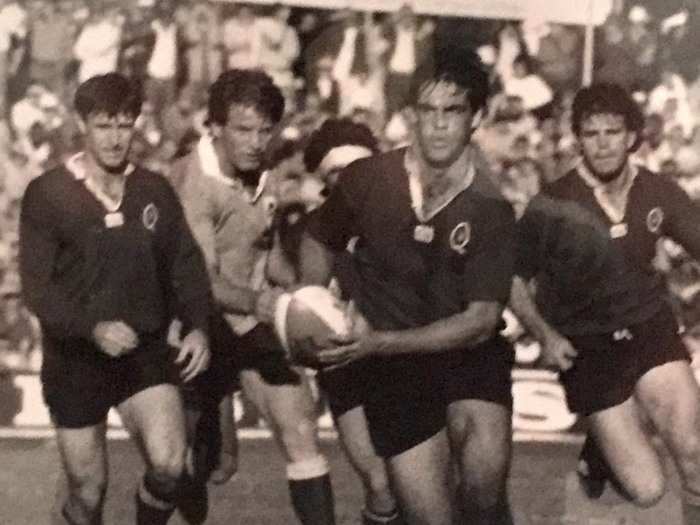 I was first influenced by Dr Mick Barry, a retired ENT from the Gold Coast, who played for the Queensland Reds and Australia as a No 9 whilst I was at school. At that time I would never have thought I would follow his career path.

I commenced my medical studies at the very young age of 16 and quickly joined the University of Queensland Rugby Union Club (UQRC). At medical school I was lucky to have a very helpful dean, Professor Ralph Doherty. In my fourth year of medicine in 1981, he had an interview with me two thirds of the way through the year, where he suggested an honourable deferment might be in my interests. That year I had attended university for about a third of the expected time. I had toured Japan with the Australian Universities Rugby XV, took multiple trips to New Zealand with the Queensland Reds and Australian under 21’s, and finally at age 20, I had just been picked for the Wallabies to tour the UK. My medical studies were definitely taking second billing.

“On finishing medicine, it was difficult to maintain the training necessary for representative football with 60-hour weeks as an intern, weekend work and work outside Brisbane making it almost impossible to train with even a club team.”

This tour was for 13 weeks with a princely allowance of £5.50 per day, which was a fortune to a medical student but not so great for those players who were parents with several kids. My one big regret from that year was that I had been part of a group assignment about the effect of smoking on life insurance premiums that ultimately obtained a top score of seven. I was left off the authorship list and I sadly never managed a perfect seven during my uni days as there were too many other distractions which prevented me from studying as well as I could have.

The next year I suffered a number of injuries and, hence, completed my academic year without too many interruptions related to rugby, although I do recall Dr Jon Cohen in my surgical tutorials discussing the weekend results with myself and others. That year one of my mentors, ‘Chilla’ Wilson at UQRC, became the Australian rugby team manager. Chilla, an obstetrician and former Wallaby captain, supervised one of my obstetric exams in his hotel room in Sydney. This was two days before I ran on to play the All Blacks. I had to wake him twice, once at the end of the exam, and once because his snoring was affecting my thinking. I am absolutely certain this type of exam supervision would not be allowed these days. One other recollection of Chilla was when I first met him at the uni rugby club at my first Colts training session with him as coach. I was late for training as I had been at lectures. I thought I would turn up with 15 mins left and watch from the sidelines but Chilla made me run at half-back for the entire 15 mins without changing out of my trousers, shirt and tie. I hadn’t met Chilla prior to that but his passion as a coach certainly left an impression on me.

Later that year on the way back from France whilst sitting in Heathrow airport for the connecting flight to Australia, Chilla made me supervise a law exam for Chris Roach, a flanker on that trip. It was hard to stay awake as we had undertaken a big night of celebrating the end of tour the night before. I presume Chris passed. 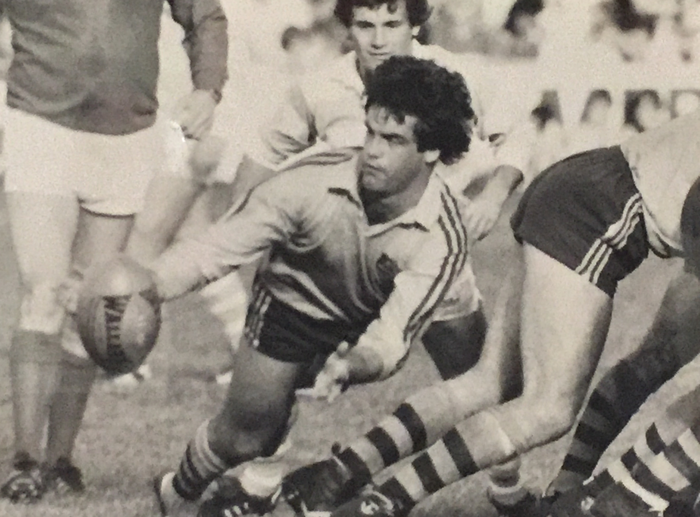 On finishing medicine, it was difficult to maintain the training necessary for representative football with 60-hr weeks as an intern, weekend work and work outside Brisbane making it almost impossible to train with even a club team. A fellow called Nick Farr-Jones also emerged playing half back and he made it difficult for me to make the Australian side. These things, along with rugby’s ongoing status as an amateur sport, made it much easier to decide to concentrate on medicine. Bill Campbell, another Brisbane Wallaby-playing medical student and now a vascular surgeon in Melbourne, was somehow able to finish his medical degree and combine work with rugby. We were at school together but I think he finished his degree three years later than me.

I also played alongside Dr Mark Loane, a former captain of the Wallabies who is now an eminent ophthalmologist. Dr Phil Crowe was a Wallaby winger who played for a few years prior to obtaining a Rhodes scholarship to Oxford. I am not sure that we will see too many medicos playing for Australia in future: I hope I am wrong.

“I am not sure that we will see too many medicos playing for Australia in future, I hope I am wrong.”

Once I finished medicine and my rugby career, I spent six months in Rockhampton, a regional Queensland city, as a surgical Principal House Officer, followed by 12 months at the Gold Coast, living across the road from the beach at Surfers Paradise. It was a busy job as a PHO covering ENT, neurosurgery, orthopaedics, general surgery, urology and vascular; a great range of experience for my future ENT career. A year in Cairns followed, prior to commencing ENT training.

My ENT interview panel consisted of Dr Michael Barry (former Wallaby) and Bill Coman, an avid rugby follower. Luckily for me there were only two applicants and I was successful. In 2016 in Queensland there are 14 applicants for one job and most of their CVs are very impressive.

The rest of my training was a combination of long hours, hard work, listening, learning and developing interpersonal skills. Luckily I passed my fellowship exam about two weeks before my first child was born. Finally, I obtained a fellowship at the Beaumont Hospital in Dublin under Professor Michael Walsh at the Royal College of Surgeons in Ireland Medical School. It was a great year professionally and personally for my wife Susie and oldest boy Harry.

When I returned to Brisbane, I obtained work at the Mater Childrens and Adults hospital where I took over doing cochlear implants. At that time, the Mater Cochlear Implant programme performed one to three a year: now we are performing 30 to 50 a year, depending on funding.

Now I look back at my rugby days with fond memories and am grateful that I had the opportunity to play elite rugby whilst completing my medical degree. I still follow rugby at the University of Queensland, watching my sons. My eldest son, a medical student, is trying to combine high level rugby with medicine. It is more difficult these days than it was for me.

Dr Parker graduated with a Bachelor of Medicine in 1984 from the University of Queensland Medical School. As a medical student he also represented Australia in rugby, playing for both the Wallabies and the Queensland Reds. Dr Parker received his Fellowship in Otolaryngology, Head and Neck surgery after completing his training in Queensland when he became a Fellow of the Royal Australasian College of Surgeons in 1993. Dr Parker is currently on the Wesley Medical Advisory Committee and is Chairman of the Wesley ENT Speciality Group. Currently Dr Parker is the Chairman (Vice Chairman) of the Queensland Branch of the Australian Society of Otolaryngology, Head and Neck Surgery (ASOHNS). 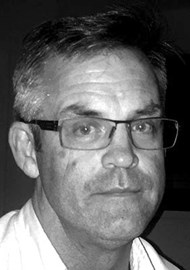