From trauma to recovery: treatment at Defence Medical Rehabilitation Centre
By Elizabeth Ashton

This year (2014) is the centenary year of the beginning of the Great War. This conflict brought with it a cluster of emotional disorders that were called at the time, Shell-Shock. The present conflict in Afghanistan has been talked of in the popular press as leading to a tidal wave of post traumatic stress disorder (PTSD) [1]. It is interesting to look from this perspective back to The Great War and Shell-Shock. Some of the lessons learned from that war established principles for mental health treatment and military practice that are still observed.

Today there is physical and emotional preparation for the battlespace; briefings on stress, PTSD and information for families before leaving the UK. Whilst deployed the Deployed Field Mental Health Team is available for assessment and advice; there is often an operational pause part way through a tour; decompression and Coming Home Briefs are compulsory whether deployed as an individual or as a unit, or returned early through injury. All of these efforts are to tackle stigma, reduce the barriers to presenting with a mental disorder and gaining treatment when needed.

During the Great War, Dr Charles Myers, Consulting Psychologist to the Forces in France, established principles for treatment [2]:

Today within Role 4 there are two mental health teams. At the Royal Centre for Defence Medicine (RCDM) there is a team of four military mental health nurses with visiting military psychiatry supported by the breadth of National Health Service (NHS) provision for psychology and neuropsychiatry. At the Defence Medical Rehabilitation Centre (DMRC), Headley Court there is a team of four mental health nurses, a psychologist and a psychiatrist in addition to the psychology provision for neurorehabilitation. The effort is to deliver coming home briefings, end to end mental healthcare, delivery of the military effect and assessment of mental disorder with treatment as required. Treatment takes place across the defence mental health footprint using the geographically dispersed triservice departments of community mental health as well as at DMRC.

The Great War was described as ‘producing nothing new in the psychoneuroses’ [5]. Shell-Shock was eventually seen as ‘War Neurosis’, an admixture of concussion, emotional shock and exhaustion. This encompassed head injury, automatisms, fugue, hysteria and anxiety as well as obsessional symptoms and many other symptoms without a clear precipitant. Shell-Shock was an acute battle related symptom and took the soldier away from the front line. The presentation of the timing of Shell-Shock is distinct from PTSD, which does not present during the battle, but over the subsequent months and years.

At DMRC all battle injured personnel have a mental health assessment and are seen by mental health aware staff that are an integrated part of the treating team. This delivers seamless care within DMRC and makes it easier for patients to access mental healthcare. The majority of the presentations are of personnel adjusting to life and ambition limiting conditions. Common presentations are of sleep disturbance, low mood and anxiety with people being anxious, jumpy and wary. Some people drink too much for a time, are irritable and take risks. This settles down over a period and as people recover they become more resilient. Some, around 10% of the battle injured cohort go onto develop PTSD. Treatment at DMRC is with National Institute of Clinical Excellence (NICE) approved interventions such as cognitive behavioural therapy (CBT), Eye Movement Desensitisation and Reprocess-ing (EMDR) and psychotropic treatment for depressive disorder. This is all embedded in a behavioural activation approach by the rehabilitation teams. Mindfulness, yoga and compassion focussed therapy are used for grounding and improved tolerance of distress.

The treatments from the Great War were based on suggestion and persuasion. If that approach failed, then back in England a re-education and occupational programme was used: to restore the body as well as the mind. This has parallels with the occupational therapy that is used as a foundation for rehabilitation at Headley Court.

It is not easy to get estimates of the prevalence of Shell-Shock. During the Passchendale fighting there were 5439 recorded cases from a cohort of 500,000 soldiers [6]. Few were thought to be malingering. One doctor records that he had treated 1000 men with Shell-Shock, of whom he considered only 28 were malingering [7]. Today we accept up to 6% or 7% of front line troops might go onto develop PTSD. Emotional disorders are not seen as malingering in the current campaign. The understanding that was held in the Great War about duration or extent of symptoms is still prescient; the spectrum of illness behaviour encompasses both minimising of symptoms as well as symptoms when no pathology can be demonstrated.

At the time of the Great War Shell-Shock did not attract a war pension. Today emotional symptoms related to combat exposure are acknowledged and included in the whole assessment of disability.

Themes emerged throughout the Great War about inculcation of morale, esprit de corps, physical care for troops and psychological assessment of recruits. These factors were seen to be crucial in having lower rates of breakdown from Shell-Shock in the trenches. These principles are extant and established a currency for caring for personnel in order to deliver a battle advantage.

The comparison of Shell-Shock in the Great War to PTSD today shows that although the syndromes are not the same, principles were established in the Great War that still shapes how an army recruits, cares for its personnel and delivers mental healthcare. The principles of caring for the injured close to the point of injury is critical within Role 4 today. The lesson relearned is that there are emotional battle scars from conflict, but that war does not create new mental disorders. 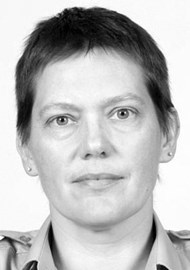