Giacomo Puccini, one of the best known composers of all time, was diagnosed with laryngeal cancer and died from the disease in 1924. In this article, Rosario Marchese-Ragona and Alessandro Martini describe Puccini’s experience of the disease with quotes from the man himself and put into context the diagnosis and treatment of laryngeal cancer in the early 20th Century. 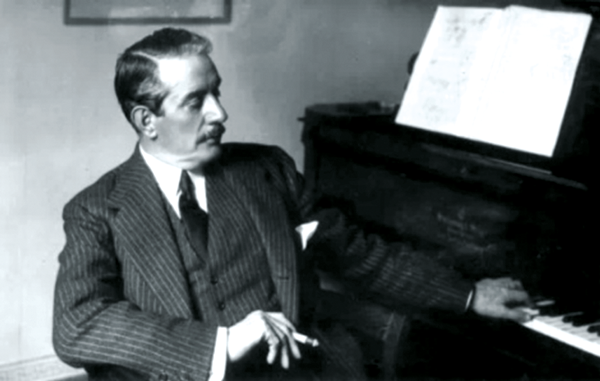 Giacomo Puccini (Figure 1), was born in Lucca in 1858 into a family of musicians. Puccini studied at the Milan Conservatory. His first opera, La Villi, had a modest success; the second opera, Edgar, was a failure. His next works, (Manon Lescaut, La Bohème, Tosca, and Madama Butterfly) were major successes in opera houses around the world, making Puccini a rich and glamourous international star.

In 1922, Puccini began to compose Turandot. This opera, which contains the aria ‘Nessun dorma’ (None shall sleep), one of the best-known tenor arias, was left unfinished by Puccini because he simply had no time to complete the work.

In February 1924, the composer, a heavy-smoker of cigarettes and cigars, began suffering from a sore-throat. As the problems persisted, Puccini resorted to several doctors who ordered a number of natural remedies, including mouthwashes, milk and honey and raw eggs. A specialist suggested thermal treatments that Puccini underwent in Salsomaggiore where he met the King of Italy, who advised him to “gargle with water and salt”.

In August he wrote to a friend: “My bad throat gives me great boredom. I have seen, as I told you, four-specialists who all recommend one cure or the other. My bad tonsillitis and pharyngitis of seven months torment me…” In the autumn of 1924, Puccini began working with Arturo Toscanini, who had been chosen to conduct the opera’s premiere, planned for April 1925 [1, 2]. His sore throat became more insistent with otalgia and pain on swallowing. The dysphonia worsened, and lumps in the neck that hindered the closure of his shirt collar developed. On 2 November, in Florence, three otolaryngologists, Professors Gradenigo from Naples, Toti (the father of dacryocystorhinostomy), and Torrigiani, examined Puccini.

“My bad tonsillitis and pharyngitis of seven months torment me…”

The consultation and a laryngeal biopsy led to a diagnosis of a walnut sized advanced extrinsic cancer of the supraglottis [3]. At this time, laryngeal cancers were classified as ‘intrinsic’ or ‘extrinsic’. Intrinsic laryngeal cancers were lesions arising in the interior of the larynx, relatively benign in character, slow in growth and only invading the glands in an advanced stage. Extrinsic carcinomas originated around the orifice of the larynx, or on its pharyngeal surface.

Their biological behaviour was considered much more malignant and insidiously rapid with invasion of the lymphatics at a very early stage. In the 1920s patients with extrinsic laryngeal cancer were left to their fate, especially when neck nodes were involved. In the period from about 1925 to 1940, radiation therapy was the treatment of choice for extrinsic cancers; surgery was limited to the small intrinsic tumours. After 1940, with the rise of the antibiotic era and some progress in surgery, radical laryngeal surgery with or without neck dissection was used for more advanced lesions [3-5].

“The consultation and a laryngeal biopsy led to a diagnosis of a walnut sized advanced extrinsic cancer of the supraglottis.”

Gradenigo promptly suggested that Puccini should go to Dr Louis Ledoux’s clinic in Brussels, where laryngeal cancer was treated by radium therapy. When Puccini went by train to Brussels on 4 November, he took with him 36 pages of notes and musical sketches for the finale of Turandot. During the trip, the composer had numerous episodes of spitting blood. On 7 November Puccini began treatment with radiotherapy; a collar containing radium was placed on his neck for a few hours per day. Puccini wrote to a friend, “I am being crucified like a Christ! I have a collar around my throat that is like torture. I am having the external X-ray treatment at present, and then they will put crystal needles into my neck and make a hole, again in my neck, so that I can breathe. [...] The thought of that hole, with a rubber or silver tube in it terrifies me. [...] What an ordeal! God help me. This treatment will last no less than six weeks, it is terrible! They assure me that I will be cured. [...] But since my arrival, my illness has worsened. I spit much dark blood each morning.” The result of external radium was relatively fast; the clinical condition improved in the following days, the haemoptysis ceased, Puccini regained his usual appetite and began to smoke again.

“In the 1920s patients with extrinsic laryngeal cancer were left to their fate, especially when neck nodes were involved.” 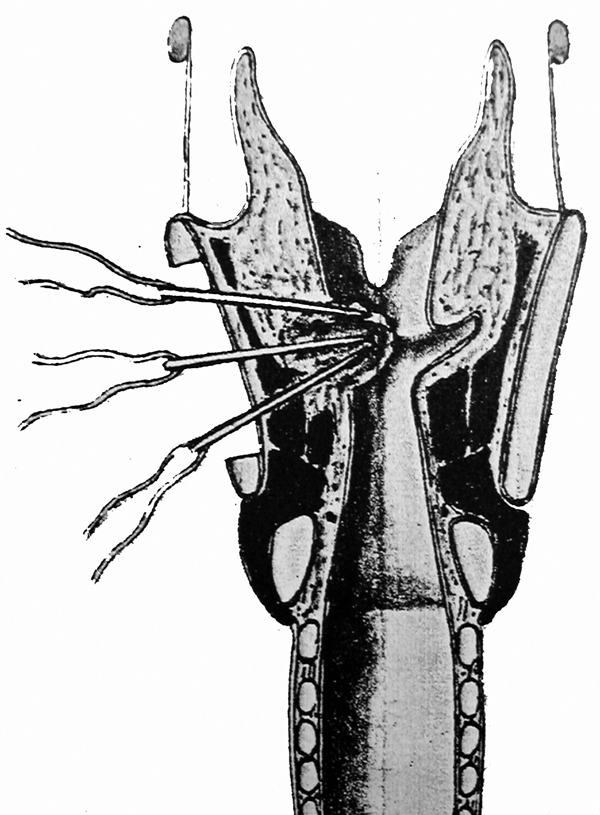 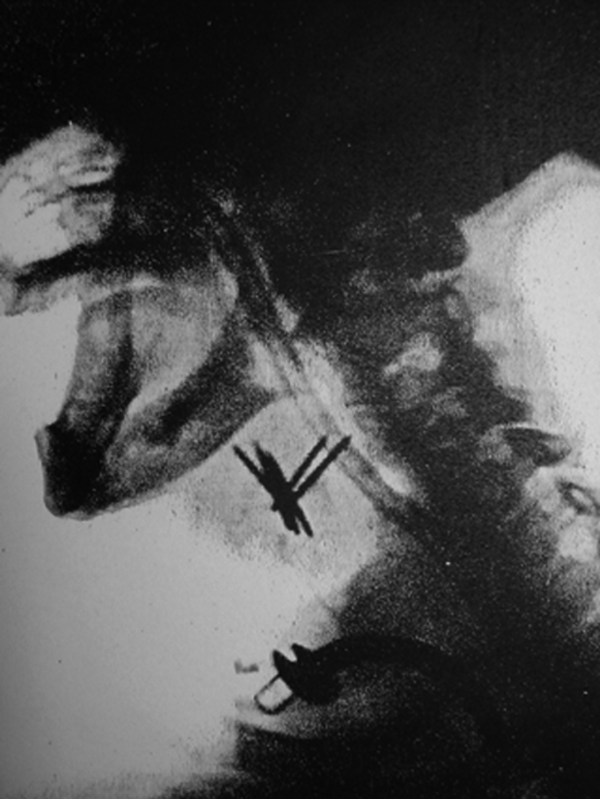 Figure 2 a and b: Illustrations from original paper by Ledoux [6].

On 24 November, Ledoux inserted seven radioactive needles into Puccini’s laryngeal cancer. The operation lasted three hours and 40 minutes and was performed under local anaesthesia. A tracheotomy was performed, and a nasogastric tube was inserted (Figure 2). Ledoux planned to leave the radioactive needles in until 30 November. Puccini, unable to speak because of the radium needles placed in his throat, wrote: “I feel as though I have bayonets in my throat!” He was fed via a nasogastric tube and he quenched his thirst in the following days with Champagne. At six o’clock in the evening of 28 November Puccini had a heart-attack and lost consciousness. His heartbeat became irregular and the wound began to bleed. Ledoux immediately removed the needles from the larynx and gave an injection, probably of morphine. Puccini, for the last time, wrote: “I am worse than yesterday, hell in my throat, and I feel faint, fresh water […]” Giacomo Puccini died on 29 November at the age of 66 [1-3]. A solemn funeral was held in Milan Cathedral on 3 December. Arturo Toscanini with the chorus and orchestra of La Scala, Milan performed the ‘Requiem Mass’ from Edgar; the Italian Parliament declared a national day of mourning. 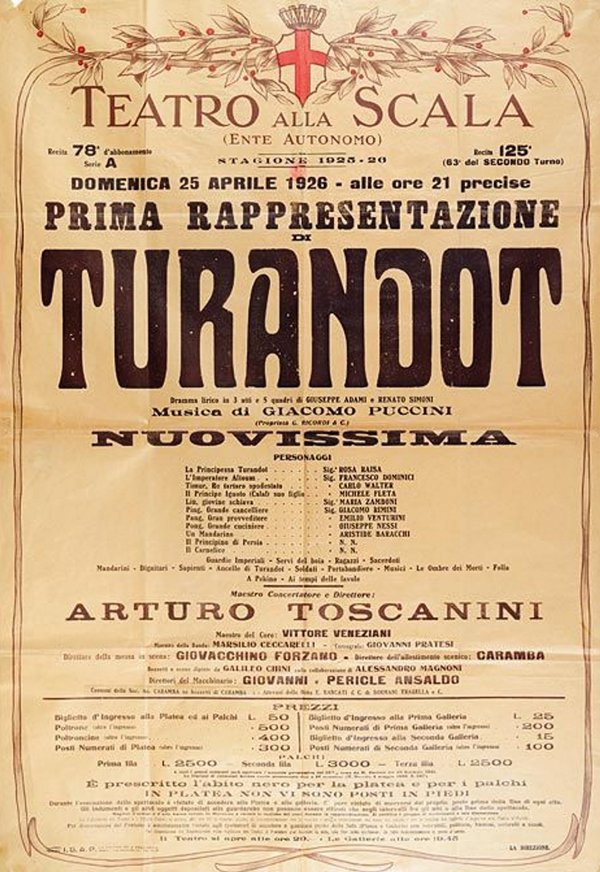 Figure 3 : Play bill of the premiere of Turandot.

The composer Franco Alfano completed Puccini’s Turandot and Toscanini conducted the opera’s premiere at La Scala, Milan on 25 April 1926 (Figure 3). During the third act, Toscanini interrupted the execution on the last note of Puccini’s score, and turning to the audience and putting down his baton said: “Here the performance finishes because at this point the maestro died.” (Mussolini had wanted to attend the performance but had also wished for the official anthem of the National Fascist Party to be played at the beginning. This request was refused by Toscanini who threatened to withdraw from the performance if the management of La Scala conceded to Mussolini’s request).

“I have a collar around my throat that is like torture. I am having the external X-ray treatment at present, and then they will put crystal needles into my neck and make a hole, again in my neck, so that I can breathe. [...] The thought of that hole, with a rubber or silver tube in it terrifies me.”

Radiotherapy in the cancer  of larynx

Early attempts to treat laryngeal cancer were performed by the application of radium tubes, sealed in containers, directly into the lumen of the larynx. This treatment often injured rather than helped patients. In order to screen the radium and ensure that the dose was evenly distributed throughout the tumour, Louis Ledoux in 1924 reported his technique that made a window in the wing of the thyroid cartilage and inserted radium needles directly at right angles into the tumour [6]. This method carried a risk of spreading the tumour and thus Neville Samuel Finzi and William Douglas Harmer of London modified the Ledoux technique in 1928 by placing the radium needles over the intact perichondrium [7]. The widespread general application of radium therapy in the treatment of laryngeal cancer was made possible by the development of the telecurie therapy apparatus in the period from 1925 to1935. A precursor of telecurie therapy was the radium collar where a radium source was contained in a low-density material like wax, leather, or rubber. Radiotherapy entered the modern megavoltage era with the development of cobalt-60 sources, betatrons, and linear accelerators in the early 1950s [8].

Rosario Marchese-Ragona has published more than 100 papers in peer review journals, with a total impact factor over 300 and 873 citations in the literature with an h-index of 18. He has supervised several medical residency training thesis and he serves as an Ad hoc reviewer for various journals. Dr Marchese-Ragona ’s research interests include history of Medicine, neurophysiology and botulinum toxin therapeutic application in ENT, primary salvage partial laryngeal surgery, salivary glands disorders, deglutition disorders and snoring and sleep apnea. As the first operator has performed more than 2,500 surgical procedures. 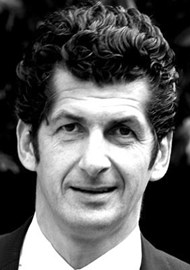 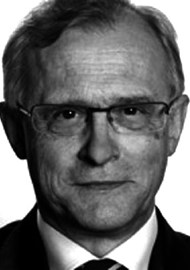