Vascular anomalies are a diffuse spectrum of abnormalities which often involve the head, neck and oral cavity. They are frequently misnamed, often being generically labelled as haemangiomas. This lack of basic understanding can cause confusion leading to a cascade of mismanagement and a loss of patient confidence.

In terms of the natural history of vascular anomalies the majority are present at birth, but can present anywhere from the neonatal period to adulthood. Occasionally high-flow arteriovenous malformations (AVM) can be acquired, for example secondary to trauma and in this setting may present a number of years later with the event often considered trivial by the patient and only recalled on direct questioning [3]. Clinical history and examination can usually differentiate between high and low-flow lesions with imaging being used to confirm the diagnosis, evaluate morphology and plan treatment. 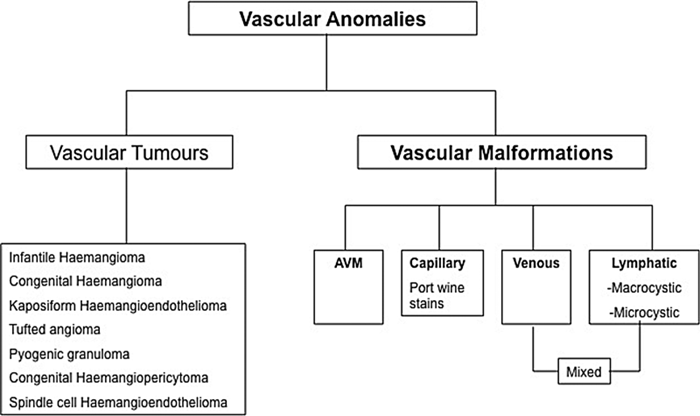 The importance of the multidisciplinary approach to the management of vascular anomalies cannot be overstated. The major stakeholders ideally include interventional radiologists, dermatologists and surgeons from plastics, ENT and maxillofacial specialties mindful that a significant proportion of these anomalies occur in the head and neck region. Occasionally input from a broader range of clinical specialties is needed. This approach is well established in the author’s institution where there are three established interlinking multidisciplinary teams (MDTs) dedicated to managing vascular malformations (paediatric, head and neck and peripheral). Often by the time these patients get referred to a dedicated MDT group they have seen a number of specialists in different institutions without getting a clear diagnosis and management plan [4, 5]. A proportion of these patients only require reassurance with a thorough explanation of the diagnosis and natural history of their condition. Treatment should be reserved for those patients with significant symptoms or cosmetic defects.

In the head and neck region the majority of lesions encountered are low-flow vascular malformations. These can be further sub-divided into capillary (port wine), venous (VM), lymphatic (LM) and mixed (lymphovenous) malformations.

Low-flow venous malformations are the commonest with 40% occurring in the head and neck, 40% in the extremities and 20% in the trunk. The aetiology remains largely unknown but the incidence is thought to be in the region of 1-2 per 10,000 births. They are usually isolated lesions but low-flow lesions can also form part of rare syndromes such as blue rubber bleb nevus syndrome. They can cause functional or cosmetic problems related to bulk and location and commonly cause pain and swelling due to venous engorgement, localised thrombosis and thrombophlebitis, mass effect or local haemorrhage. When skin is involved there is usually a blue discolouration. They are soft and compressible masses which distend on dependency and empty on elevation, often with focal palpable calcific areas known as phleboliths, a result of micro-thrombosis. Phleboliths are present in around 20% of cases and are pathognomonic for the condition. 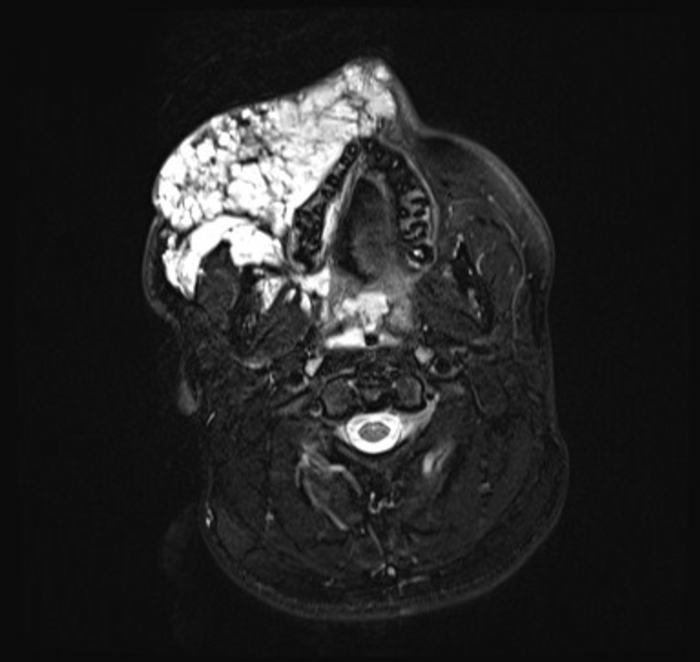 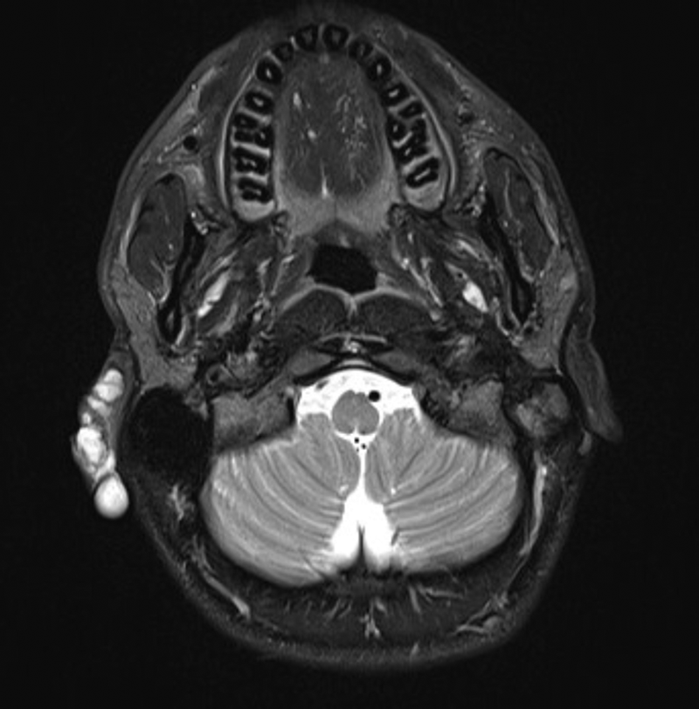 The clinically evident portion of the lesion on examination is often only the minority of the mass volume and this is referred to as the ‘iceberg’, with the larger proportion of the lesion extending into the deeper anatomical spaces such as the parapharyngeal space, buccinator space and infra-temporal fossa [4]. This highlights the importance of a thorough imaging review to assess the full extent of the lesion and anatomical surroundings. Any treatment with sclerosants causes inflammation and swelling and this in turn can lead to compromise of adjacent structures, the most important being the airway. Imaging assessment typically consists of ultrasound and MRI. The sequences commonly used in a vascular anomalies protocol include T1 spin-echo sequences and T2 fat-saturated and / or short inversion recovery (STIR) imaging to delineate the lesion from the surrounding fat and determine its relation to surrounding structures, particularly the airway and neurovascular bundles. Post-contrast (gadolinium) MR imaging can be used but is not necessarily essential as a correct diagnosis can usually be made with clinical findings, site and the pre-contrast MR imaging [3, 5]. CT has little value in the assessment of low-flow lesions but can occasionally be of benefit if bones are involved.

Low-flow venous malformations (LFVMs) have a mixed morphology and consist of abnormal poorly developed vascular channels and degenerative muscle matrix [6]. The vascular component consists of abnormal venous channels of varying size and wall thickness that predispose to local thrombosis and this intermittent thrombosis is responsible for the painful symptoms along with compression of adjacent structures. The proportion of vascular spaces and matrix present within the VM differ from lesion to lesion and ultrasound is utilised to determine these properties. This is essential when considering treatment. Those lesions with demonstrable macro-vascular spaces are more amenable to injection sclerotherapy and more likely to have a clinical benefit following treatment. 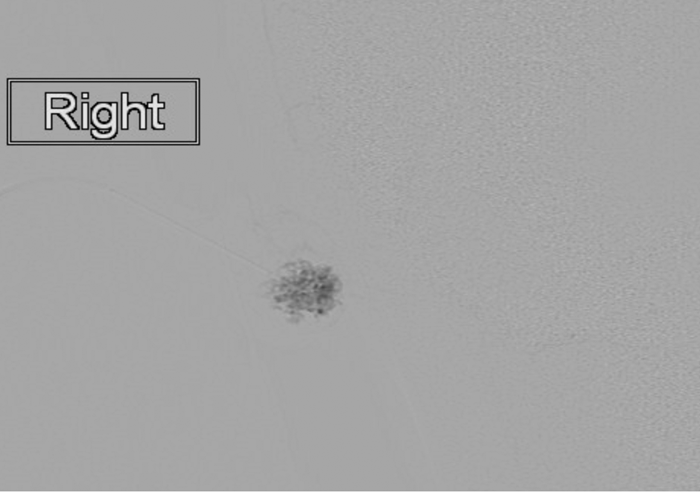 Figure 4: Static image (same patient as figure 3) from a digital subtraction venogram obtained via a percutaneous needle within the right pinna venous malformation demonstrating a characteristic appearance and no significant draining veins. This image is typical of a low-flow venous malformation, prior to the injection of a sclerosant.

Treatment should be reserved for symptomatic lesions and options include surgery and percutaneous sclerotherapy, either separately or in combination [3, 5]. Spontaneous regression of lesions is rare and historically surgery has been the treatment of choice but this has led to devastating cosmetic consequences and significant recurrence rates. Surgery nowadays is usually reserved as a debulking procedure following devascularisation with several courses of sclerotherapy.

Sclerotherapy is nowadays considered the treatment of choice and it works by obliterating the endothelial cells of the macrovascular component of the lesion leading to fibrosis and shrinkage. More than one percutaneous needle puncture into the lesion is needed followed by aspiration of contents. Injection of a small amount of contrast confirms needle position and may demonstrate communication with normal adjacent veins. Careful consideration of venous drainage is needed and if safe direct compression of these veins during injection cannot be achieved, sclerotherapy may be too risky and therefore should be abandoned. Various sclerosants are available but the most commonly used is sodium tetradecyl sulphate (STS) 3% (Fibrovein). It is typically injected as a foam (mixed with air through a three-way tap and two syringes) and is much less toxic than ethanol with a much better safety profile.

The second most common low-flow lesion in the head and neck is lymphatic malformation, particularly in infancy, historically referred to as cystic hygromas. Lymphatic malformations can grow rapidly, particularly in the first few years of life and therefore treatment is often justified. Often there is a cross-over with low-flow venous malformations and a mixed pattern is seen as the two entities are thought to be embryologically linked. Imaging work-up for lymphatic malformations is much the same as for low flow venous malformations. Treatment is similarly the same but other sclerotherapy agents are available and perhaps more efficacious than STS. Perhaps the optimal agent to treat lymphatic malformations is OK432 (Picibanil) which is derived from streptococcus pyogenes. Its exact mechanism is poorly understood but it is suggested it induces endothelial apoptosis leading to lesional resolution [7]. Intralesional bleomycin has also been used to successfully and safely treat LFVMs with no significant systemic side-effects [8].

Complications of sclerotherapy include immediate pain and swelling. Swelling is a particularly important consideration pre-treatment as surrounding vital structures can be compromised. As mentioned earlier in this article an example is the upper airway which can be compromised and pre-treatment ENT opinion and procedural support is often required; rarely an elective tracheostomy is required. Skin necrosis is more likely to occur with lesions in a subcutaneous position. Neuropraxia secondary to neuronal compression due to localised swelling has also been described and is usually temporary, and in the head and neck a common consideration is the facial nerve.

High-flow lesions (true AVMs) in the head and neck are much less common than low-flow lesions. They can cause significant morbidity and occasionally be life threatening and tend to be more challenging to treat. Essentially these lesions arise due to a high flow communication between an artery and vein. This communication is often complex and more than just a simple one-to-one artery–vein (i.e. AV fistula). The Schobinger classification is a clinical one and grades the clinical severity of the lesion and can be used to guide optimal timing of treatment [9]. Typically a symptomatic or rapidly growing AVM should be treated. Clinically these lesions are pulsatile and warm to palpate. Embolisation is the mainstay of treatment of these lesions nowadays and several approaches can be taken, including trans-arterial, trans-venous or direct stick into what is referred to as the ‘nidus’ or heart of the lesion [5, 10]. Pre-procedural imaging by way of MRI and MR angiography (occasionally CT angiography) is used to determine the best treatment approach. 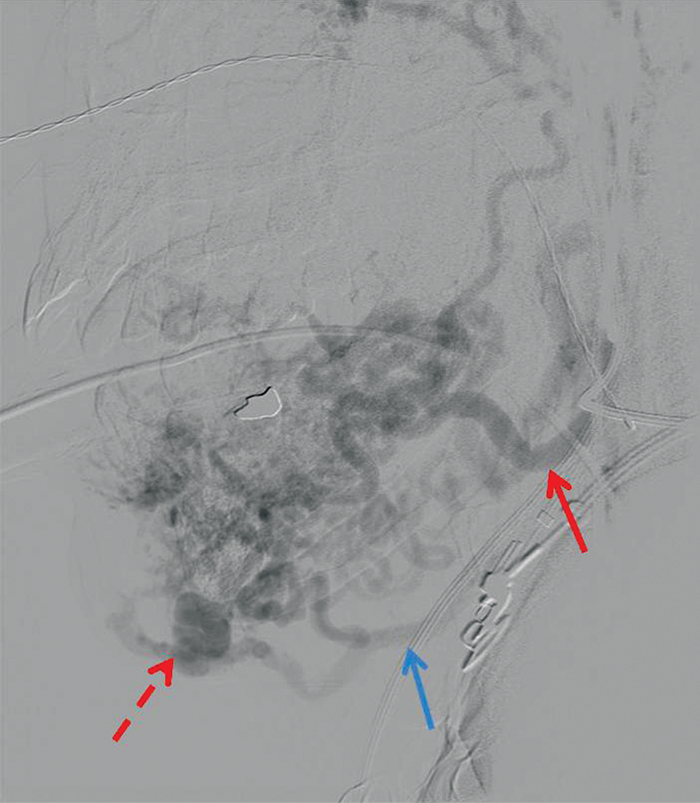 Figure 5: Arteriovenous malformation of lip / chin. Simultaneous arterial and venous opacification of facial artery and vein on digital subtraction angiography (read and blue arrows respectively) representing ‘shunting’. The nidus is the ‘heart’ of the lesion and occlusion of this is required for successful treatment (broken arrow).

Vascular anomalies which commonly occur in the head, neck and oral cavity can result in significant morbidity or even threaten life due to uncontrolled bleeding. Understanding their classification, imaging and clinical findings is essential in initiating the correct management pathway. A multidisciplinary approach is the key to optimal outcome and patient satisfaction. 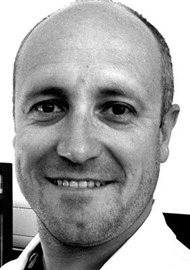 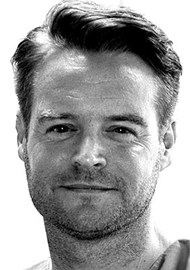