Laryngeal papillomatosis remains one of the most frustrating conditions seen by laryngologists. Sam Majumdar gives us an overview of the current science and clinical practice.

Human papilloma virus is a small (> 8kb) double stranded DNA virus with approximately 200 subtypes [1]. It belongs to the papova family of virus. The subtypes 6, 11, cause approximately 90% of laryngeal papilloma. The other 10% is attributed to HPV Type 16, 18. The Type 11 is the clinically aggressive type while Type 16 and 18 have more malignant transformation potential. HPV Types 6, 11, 16 and 18 together cause most cervical cancers which became the central logic for the development of the quadrivalent vaccination.

The incidence of recurrent respiratory papillomatosis (RRP) is 4.3 per 100,000 population in children and 1.8 per 100,000 in adults. RRP has a bimodal age distribution in first presentation – it usually affects teens and people in their fourth decades of life. Presentation of RRP before the age of 12 years is classed as juvenile onset RRP (JORRP). All presentation after the age of 12 is classified into the adult onset RRP (AORRP) group.

HPV infection in children is most commonly transmitted vertically at birth from HPV infected mothers. Transplacental transmission of HPV to the foetus happens in about 12% of cases. Presence of anogenital papillomata in the mother can increase the risk of development of RRP by 231 times. In adults, HPV virus is transmitted through sexual interactions. It is estimated that over 80% of us will pick up HPV during our lifetime. Unfortunately, vast numbers of high-risk HPV infections can remain asymptomatic and go unnoticed, thereby adding risk of spread to the population and long-term risk of malignant transformation in those infected by the virus.

“Many patients are quite overwhelmed and distressed by the diagnosis of an STI (sexually transmitted infection) causing damage and deformity to their larynx.”

Persistent hoarseness of voice, shortness of breath at rest or during exertion, cough and stridor are some of the common presenting symptoms of laryngeal papillomatosis. Clinical presentation depends on the site and size of the lesion(s). Involvement of the anterior commissure, anterior two thirds of the vocal cord or bulky disease preventing vocal cord apposition during voice generation tend to present early. Supraglottic involvement may go unnoticed for a long time (Figure 1). 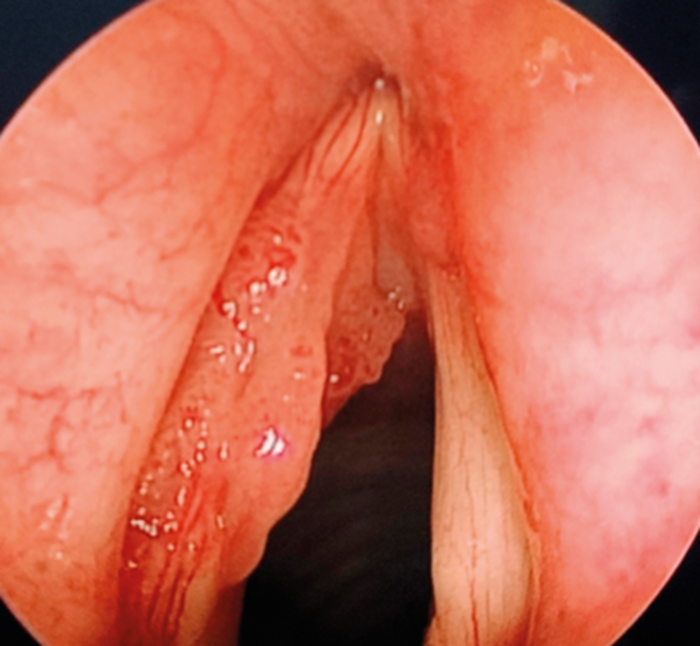 All patients need formal diagnostic laryngo-tracheo-bronchoscopy to correct assessment and staging of the disease. Histopathological findings would confirm diagnosis. HPV subtyping is highly recommended as good practice, as it helps to find the aggressive variety (i.e. subtype 11) and those with higher predispositions for malignant transformation (i.e. subtypes 16, 18).

Many patients are quite overwhelmed and distressed by the diagnosis of an STI (sexually transmitted infection) causing damage and deformity to their larynx. A thorough assessment of voice function and recording of VHI-10 score before and after surgical interventions are very useful for reassurance and rehabilitation of patients. All patients with dysphonia and glottic involvement with papilloma should have stroboscopy assessment and have photo-documentation of the disease.

At present there is no curative treatment for laryngeal papillomatosis. Removal of epithelial tissue infected with HPV, which present as visible exophytic swelling in the larynx, leaving the Reinke’s space intact where possible, is the frequent practice. The microdebrider skimmer blade can be used, and some surgeons combine this with CO2 laser in scanning mode to remove papilloma close to the vocal cord. The use of KTP and other angiolytic lasers as a primary tool to remove the bulk of laryngeal papilloma is not widely practised in the UK. More recently, coblation has been suggested as a treatment (Figure 2). 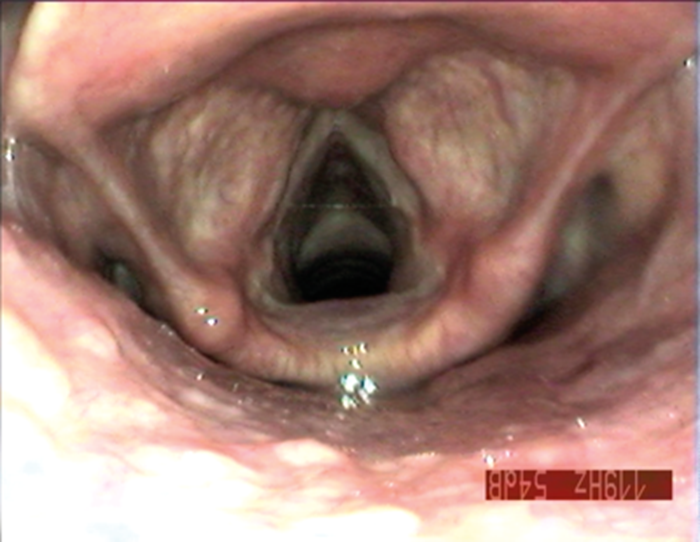 The aim of such therapy is to prevent scarring, local spread and dissemination and recurrence. To date no adjuvant therapy has been shown to have significant advantage in management of laryngeal papillomatosis. None of these therapies have been widely accepted in clinical practice although some have shown promise and await further evidence from research.

Interferon was the very first adjuvant therapy used to control disseminated RRP. Interferons stimulate antigen production by lymphocytes. IFN-α2b has shown partial response in some trials. Leukopenia, thrombocytopenia and neurological disorders are some of the troublesome side effects of Interferon therapy. Use of Interferon is no longer favoured [2].

Cidofovir inhibits viral DNA polymerase, thus inhibiting viral replication. Intralesional Cidofovir is the preferred route of administration of this drug. Frequent recurrence of RRP and aggressive disease are the situations where Cidofovir has been used successfully by some authors. Reported development of dysplastic changes in 2.5% of a series of 188 cases of RRP treated with intralesional Cidofovir was a significant cause for concern [3]. However, considering the natural tendency of 2-3% dysplastic change rate of HPV it is difficult to attribute this solely to the drug in question. Marked regression of papilloma and complete remission of disease have been reported in small prospective trials where intralesional Cidofovir was used. Other studies have reported 75% complete remission with disease stabilisation for 33.4 months in juvenile onset RRP. One RRP task force survey of 74 laryngologists highlighted the use of Cidofovir as adjuvant therapy in patients needing frequent surgical debulking and cautioned that the dose should remain below the safe limit of 3m/kg and volume. Large randomised controlled trials are needed to support the use of Cidofovir and reassure patients and surgeons alike.

This recombinant monoclonal antibody has the ability to inhibit the vascular endothelial growth factor and thus the viral induced angiogenesis. The mode of delivery is intralesional. Bevacizumab has been reported to have reduced recurrence of HPV when used as an adjuvant therapy after debulking of papilloma with KTP laser. This drug has very few side-effects in small trials.

“Although 85% of parents would like their male children to be vaccinated this is still not offered on the public health disease prevention programme in the UK.”

This is a humanised monoclonal antibody that activates T-lymphocytes by selectively blocking some receptors thus helping immune cells to recognise and kill virally infected abnormal cells. Pembrolizumab is known to inhibit Programmed Cell Death Protein 1 which is highly expressed by some HPV associated head and neck tumours.

An ongoing Phase II clinical trial (NCT02632344) is investigating the safety and immunomodulatory effect of Pembrolizumab in the treatment of advanced RRP cases with tracheo-broncho-pulmonary involvement.

This is not an adjuvant therapy; although used by some surgeons. Local application of Mitomycin C has been used to prevent glottic scarring. Mitomycin C is, therefore, used by some laryngologists especially in the management of papilloma involving the anterior commissure.

HPV is the commonest sexually transmitted infection in the UK. HPV infection is almost non-existent in people who have never had sexual intercourse. Sexual encounter at an early age and having multiple sexual partners are the two most important determinants of HPV infections in adults. The US Centers for Disease Control and Prevention recommended the routine use of vaccination in girls aged 11-15 and use of vaccination until the age of 26 as a catch up for those who have missed out to prevent cervical cancer. Gardasil, a quadrivalent vaccination by Merck, was approved for this purpose by the US Department of Food and Drug Administration in 2006. The FDA had also approved another bivalent vaccination, Cervarix for immunisation against HPV 16, 18 which has limited use for laryngeal papillomatosis. Both these vaccinations have been proven to be highly efficacious in clinical trials. Gardasil-9 (a 9-valent vaccine for HPV) has been recently approved.

Vaccination against HPV infection is most effective in children at the age before any sexual exposure. In the UK HPV vaccination for girls aged 12-13 started in 2008. Although 85% of parents would like their male children to be vaccinated this is still not offered on the public health disease prevention programme in the UK. An anti-HPV vaccination programme for boys in Australia started in 2013. The annual cost for running a vaccination programme for boys has been estimated at £22 million compared to the significantly larger economic and human cost of this notoriously challenging disease that defies eradication. A tentative date for HPV vaccination for boys in the UK has been the year 2020; which will leave 400,000 boys annually at the risk of exposure to HPV infection (Gender Neutral Vaccination – www.HPVAction.org).

“The biggest challenge in managing HPV disease is probably the relentless spread of this virus across all populations.”

The biggest challenge in managing HPV disease is probably the relentless spread of this virus across all populations. Vaccination programmes can effectively protect those who have not already been infected by it. There is also emerging evidence of the protective effect of vaccination as adjuvant therapy and prevention of infection in adults.

Some of the HPV subtypes are potentially oncogenic. HPV associated cancers of the head and neck were first suspected in 1983 in a group of oropharyngeal cancers. Based on molecular findings, it is now believed that 80% of oropharyngeal squamous cell carcinomas are HPV positive. HPV-16 is found in 80 of these tumours [5].

The American Joint Committee on Cancer (AJCC) and Union for International Cancer Control (UICC) have included testing for HPV in their guidelines as a standard pathological assessment for oropharyngeal cancer.

Making HPV vaccination gender neutral will make a significant contribution to increasing herd immunity. The use of vaccination in patients with RRP may have adjuvant benefits. Studies have shown a link between increased serum anti-HPB antibody titre with remission of clinical disease.

The primary interventions and the use of adjuvant therapy for laryngeal papillomatosis show some variations amongst practitioners in the UK and globally. The establishment and use of a national database and guidelines hopefully will help patients through evidence-based standardisation of practice; along with dissemination of knowledge of good practice. Ideally all patients with laryngeal papillomatosis would receive direct care from a laryngologist with phonosurgical skills and concurrent input from a multidisciplinary team [6]. 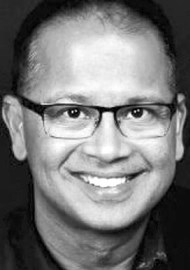