Imaging of the extra-cranial head and neck is challenging due to the anatomic complexity of the region. CT, MRI and ultrasonography (US) are amongst the most frequently utilised radiological modalities in head and neck imaging but do not always provide a conclusive answer to the clinical question posed by the clinician. These modalities enable accurate assessment of anatomical structure but have certain limitations, for example, in the postoperative setting where differentiation of scar tissue from tumour recurrence can be extremely challenging.

Nuclear medicine is a branch of medical imaging that uses radioactive isotopes for the diagnosis and treatment of various diseases. It bridges the border of anatomy and physiology and provides complementary information about physiological function. Most clinicians are already familiar with some nuclear medicine techniques such as the use of radioactive isotopes in investigation and treatment of benign or malignant thyroid conditions, parathyroid scintigraphy and positron emission tomography (PET) / CT imaging in oncology. This article aims to shed light on other nuclear medicine applications that can aid the decision making process of the head and neck specialist.

Osteomyelitis of the temporal bone is an uncommon but life threatening condition that was first described in 1959 by Meltzer and Keleman [1]. The condition was renamed malignant otitis externa (MOE) by Chandler [2] who published the first series of progressive osteomyelitis in the temporal bone in 1969. The terms skull base osteomyelitis (SBO), malignant otitis externa (MOE) and necrotising otitis externa are often used interchangeably. MOE is the term most frequently used by the medical community and in the scientific literature even though the condition is clearly not neoplastic. SBO is a more accurate term but is often used to refer to infection spread to the base of skull, beyond the external auditory canal [3]. Pseudomonas aeruginosa is the most common causative organism in SBO and the condition is more prevalent in the elderly population and in diabetic or immunocompromised patients. Prompt identification, treatment and monitoring of SBO is essential to prevent severe complications and mortality.

“To date, no imaging modality provides a ‘gold standard’ for diagnosis and follow-up of SBO.”

To date, no imaging modality provides a ‘gold standard’ for diagnosis and follow-up of SBO. CT allows good assessment of bone erosion and extracranial spread, both features of advanced disease; MRI offers good soft tissue evaluation including meningeal involvement and spread into medullary bone spaces [4]. However, neither of these modalities is particularly helpful in monitoring or follow-up due to persistence of anatomical alterations despite resolution of disease. Nuclear medicine techniques such as bone scintigraphy, indium-labelled white blood cell scans and gallium scans have traditionally been the mainstay of diagnosis and follow-up of patients with SBO. Scintigraphic bone scanning with technetium-99m methylene diphosphonate (99mTc-MDP) has high sensitivity for demonstrating increased osteoblastic activity and allows earlier diagnosis of osteomyelitis than CT imaging [5]. Bone scintigraphy remains positive for months even if there is no active infection and is therefore not useful in long-term monitoring of the condition. Indium and gallium-labelled radiopharmaceuticals accumulate in areas of active infection and can therefore be used for follow-up and prediction of resolution (Figure 1).

Biopsy of the sentinel lymph node (SLNB) has received widespread enthusiasm in staging of many head and neck tumours such as melanoma and merkel cell carcinoma [6]. The technique is based upon the observation that primary malignancy initially spreads to one or a few local lymph nodes before it spreads to other lymph nodes. It is widely acknowledged that presence of metastatic disease in the sentinel lymph node (SLN) predicts metastatic involvement of the entire regional drainage basin [7]. Lymphatic drainage of the head and neck is more complex and variable than other regions of the body. One of the benefits of SLNB is identification and classification of lymph node basins that can harbour micro-metastasis, without relying on traditional anatomical drainage maps [8].

The procedure involves subcutaneous injection of radio-labelled colloid into the tissue parenchyma around the tumour. The regional drainage of the radiopharmaceutical follows that of the primary tumour and hence the SLN can be identified by dynamic and static imaging using a nuclear medicine gamma camera. Most (>95%) of the injected activity remains localised to the injection site but after a period of time a series of ‘hot spots’ appear and the SLN is identified as the first focus of tracer accumulation (Figure 2). The site of the SLN is marked on the skin to assist the surgeon in locating it at the time of surgery. SLN removal can be aided by intraoperative use of a handheld gamma probe; the nodes with the highest count reading are removed as well as any adjacent nodes with more than 10% activity. The level of radiation exposure for the surgeon, theatre staff and histopathologist involved is very low. SLN biopsy carries a lower morbidity than formal lymph node dissection and is a useful aid in staging of cutaneous cancer and directing management decisions. 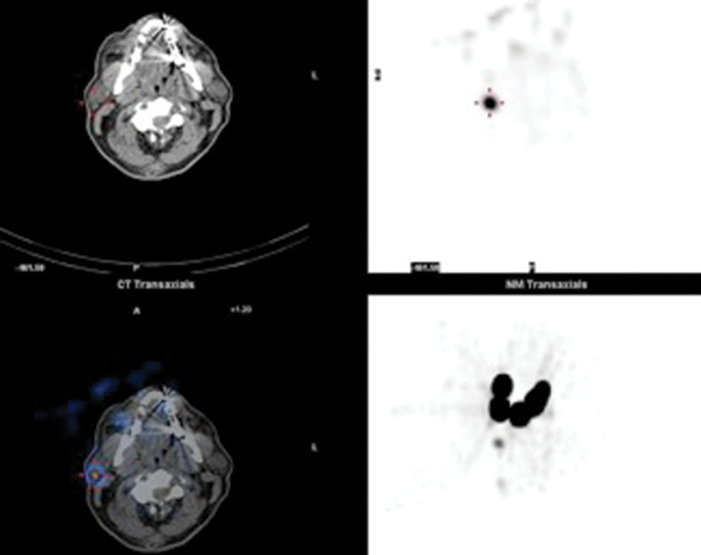 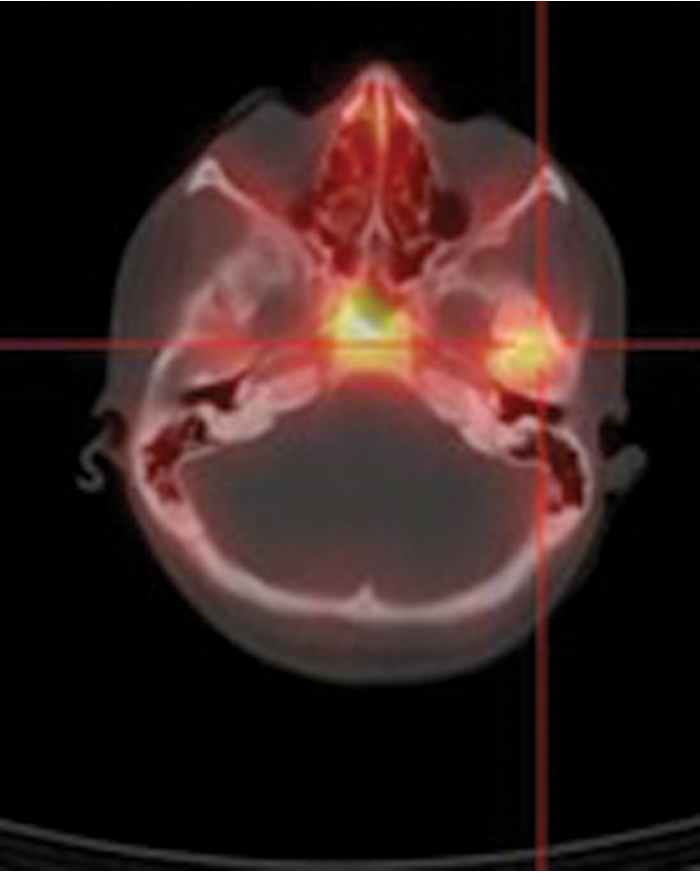 Figure 3: Fused 99mTc-MDP SPECT / CT image showing focal accumulation of the radiopharmaceutical in the left TMJ in a patient with left TMJ dysfunction.

The current state of play in the world of hybrid imaging is described by Greg Freiherr as follows:

“Hybrid imaging is the ‘peanut butter cup’ of radiology; two complementary but very different imaging modalities rolled into one. PET / MR is the rookie, more possibility than reality. PET / CT is the workhorse with millions of procedures performed over the last decade. SPECT / CT is the wannabe, slogging about on the clinical fringe” [11].

The images used in this article were all acquired using a hybrid SPECT / CT system. Traditionally, radionuclide imaging has been performed using planar imaging only. The latter has several limitations; only two dimensional projections are acquired, the depth of the imaged source cannot be assessed and there is loss of contrast due to activity in underlying and overlying structures. SPECT allows three-dimensional assessment of structures with improved contrast. It involves acquisition of a complete set of two-dimensional projection images from all around a patient following injection of a suitable radioisotope. The three-dimensional distribution of radioactivity in the patient is then derived through reconstruction of tomographic images from the projection data. The problem of misregistration between SPECT and CT scans performed separately has largely been overcome by hybrid SPECT / CT technology. This allows simultaneous acquisition of anatomical and functional information on a single scanner in a single session with immediate fusion of images using integrated software. SPECT / CT is increasingly being used for a wide range of oncological and non-oncological applications and there is enough evidence in the literature to support its clinical value.

For example, it has been shown to have an incremental diagnostic value in differentiated thyroid cancer over planar imaging or SPECT alone due to improved anatomic localisation and characterisation of indeterminate radioiodine foci in the neck as benign or malignant [12]. SPECT / CT is also commonly used in preoperative localisation of parathyroid adeonoma. In the advent of minimally invasive parathyroidectomy more emphasis has been put on routine, accurate preoperative evaluation of patients with primary hyperparathyroidism. By combining the three dimensional functional data of SPECT with the anatomical data of CT, hybrid SPECT / CT with 99mTc-sestamibi (Figure 4) provides accurate anatomical localisation of parathyroid adenomas and a surgical roadmap [13]. 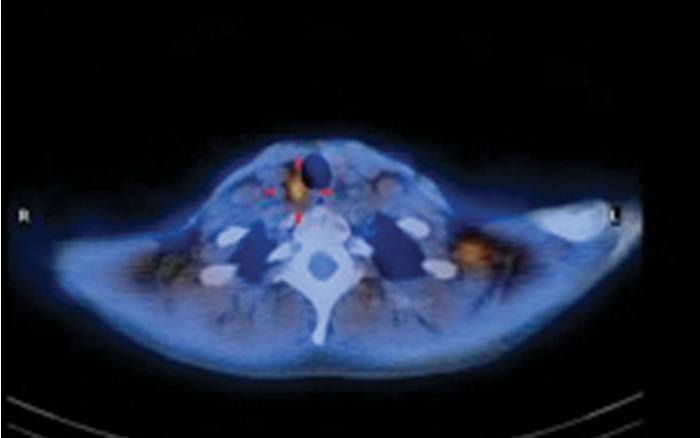 Other applications of SPECT / CT include improved SLN localisation and estimation of internal radiation dosimetry in radioimmunotherapy for treatment of non-Hodgkins lymphoma and thyroid cancer [14].

The future is scintillating! 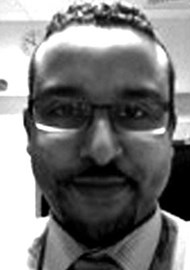