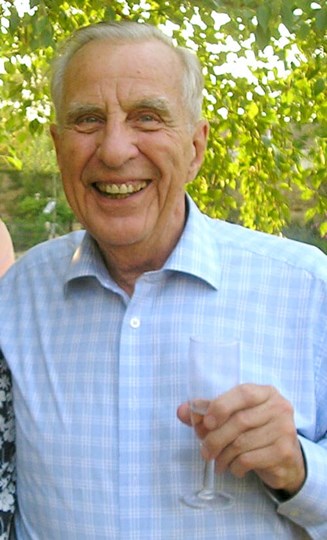 Bernard Colman at his leaving party at the old Radcliffe infirmary
in 1989, which was his retirement year.

Born above a corner shop in Wolverhampton on 17 October 1924, Bernard Colman entered Wolverhampton Grammar School in 1933 but left early determined to get into medicine. He enrolled in a local college to do physics and biology A level. In 1942 he received offers from Birmingham and Edinburgh, decided on the latter, and qualified in 1947.

Training jobs in Edinburgh led to a general surgical fellowship, after which he started ENT training. He was a pioneer in the experimental development of stapedectomy as a Research Fellow to Dr Harold Schuknecht in Detroit, with whom he remained a lifelong friend. When he returned as Senior Registrar to Edinburgh, the department was the first to import the newly invented Zeiss operating microscope (by chance the second one imported into the UK went to his future colleague, Gavin Livingstone in Oxford). He made his own fat/wire stapes prostheses and performed many of the early stapedectomies in the UK.

He was appointed Consultant in Coventry in 1962 and then we were fortunate when he moved to Oxford in 1964. He continued to do experimental animal work and wrote his thesis via Oriel College on Experimental Stapedectomy and was awarded an MA in 1967 followed by an MSc in 1971.

He retired in 1989 having forged an impressive national and international reputation. He examined worldwide, was President of the Otology section of the RSM, and had multiple awards from European, Indian, Australian, South African and American ENT societies. He was main author of the ENT textbook, Hall and Colman 1967-1990, and many chapters of various textbooks in addition to peer-reviewed papers. His teaching to trainees in the specialty was inspirational. He was so proud of them all and immensely interested in their future careers. Bernard and his beloved Ilse had no children of their own, but all his trainees looked on him as their father figure. Nearly all have fond memories and apocryphal stories about him!

He was also a great character, didn't suffer fools gladly, had a loathing for bureaucracy, made his trainees attend the local gym weekly with him to keep them fit, skied, mountaineered, sailed, scuba-dived and had a smallholding sheep farm in mid Wales. He had a long association with the Royal Navy including National Service 1949-51, nearly shipwrecked in the Moray Firth and ending up as Civilian Consultant in Otology. As a member of the Austrian Alpine Club he regularly hiked, usually at about 10,000ft, over glaciers and snowfields and only gave up at 65 when a great friend was killed. He loved the mountains and skied each year from 1952 until he was 78 when a new knee was necessary. He and Ilse owned a 29ft yacht in which they cruised extensively from Poole to the Channel Isles, North Brittany coast and Scilly Isles, often in challenging conditions. His last great passion was scuba diving and, having done the various PADI certificates, he dived on some of the world’s best reefs completing 1300 dives. His last dive at 89 made him the oldest PADI diver in the UK and possibly the world. 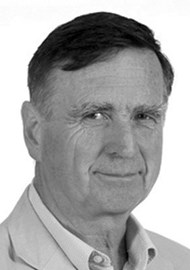