Depending on your point of view, laryngopharyngeal reflux (LPR) is either ubiquitous or is over-diagnosed. Are singers more prone to LPR? What are the best tests? Mark Watson and Jane Shaw tell us more.

Laryngopharyngeal reflux (LPR: the backflow of gastric contents into the pharynx and larynx) is commonly implicated as a cause of throat symptoms. It must always be borne in mind that LPR is only one potential cause of throat symptoms, and other possibilities of laryngopharyngeal inflammation (including smoking, alcohol intake, infections, allergy and vocal abuse) must of course be considered.

There is growing evidence both from clinical research [1-3] and musicians [4] that singers may be at particular risk of problems related to LPR. This heightened risk amongst singers has been attributed to the mechanics of singing, which involves the active use of the diaphragm for breath support, inevitably causing abrupt and prolonged increases in intra-abdominal pressure, which is known to increase reflux events.

There is also evidence that singers have elevated sensitivity to inflammatory changes in the larynx and pharynx. Singers’ professional lives can also make them more prone to lifestyle factors (such as eating late in the evening) which can exacerbate reflux.

Common symptoms include dysphonia, globus sensation (feeling of something caught in the throat), throat clearing, thick mucus in the throat, sore or dry throat, and episodes of coughing and choking. Symptom severity can be documented by use of a scoresheet such as the Reflux Symptom Index. In singers, reduced vocal range, altered clarity of vocal tone, laryngeal irritation and coughing during performance may be particular issues.

“This is the best test for demonstrating oesophageal dysmotility, which is emerging as a potentially very common cause of throat symptoms”

It is now well recognised by gastroenterologists that reliance on symptoms alone is not a good way of assessing the presence of significant reflux disease. With regard to gastro-oesophageal reflux (GORD), an individual presenting with ‘typical’ heartburn may be suffering from erosive oesophagitis, non-erosive reflux disease (NERD), oesophageal hypersensitivity or functional heartburn. Establishing the actual cause of the symptoms is important in terms of response to treatment, as only the first two causes listed are likely to respond well to acid suppressant medication. Further investigations are therefore required to establish the correct diagnosis. This approach also applies to LPR, as clearly only those who actually suffer from reflux will respond to anti-reflux treatment.

In many cases, LPR has been a purely clinical diagnosis made in the ENT or laryngology clinic following a clinical history and laryngeal endoscopy. If the history is compatible and there are signs of laryngeal inflammation, the patient is treated for LPR. This may explain the poor results some studies have reported for anti-reflux medications in patients diagnosed on purely clinical grounds: as described for GORD patients, if the patient does not actually have significant reflux, then the diagnosis is incorrect, and the treatment will not work.

Investigations for reflux disease include the following:

Barium swallow is an X-ray examination carried out whilst swallowing a contrast medium. It is a traditional test carried out in ENT clinics, but it is not an accurate test for reflux disease.

Oesophagogastroscopy is an endoscopic examination of the upper gastrointestinal tract, but shows no abnormality in the majority of LPR patients. Many ENT departments now have the ability to carry out transnasal oesophagoscopy, which is less uncomfortable for the patient, but, again, a normal result does not exclude reflux disease.

High resolution oesophageal manometry is an invasive but very helpful test. It involves passage of a catheter through the nose into the oesophagus and stomach. The position and function of the upper and lower sphincters can be documented, and this is the best test for demonstrating oesophageal dysmotility, which is emerging as a potentially very common cause of throat symptoms.

24-hour dual channel pH monitoring (with or without impedance measurement) has long been regarded as the ‘gold standard’ test for the presence of pathological reflux disease. A transnasal catheter is passed with one sensor just above the lower sphincter and another at the level of the upper sphincter. Singers can be encouraged to perform singing tasks during the 24-hour testing period and are able to mark the time they did so on the data collection record. 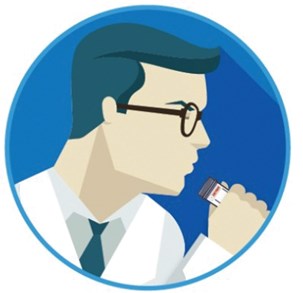 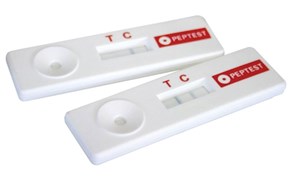 Pepsin testing (Figure 1) is a non-invasive method for detecting the presence of pepsin, a gastric enzyme, in pharyngeal secretions. The patient collects three specimens in a special test kit (PeptestTM, RD Biomed, Hull, UK), usually first thing in the morning, an hour after lunch and again after evening meal. This sample collection schedule can be adapted with singers to include a specimen collected after singing tasks. A positive result will be obtained in 80% of patients with significant LPR [5].

In conclusion, singers are often reluctant to undergo invasive tests for fear of damaging their larynx during the testing process. Pepsin testing offers a cheap and non-invasive option that allows singers to perform singing tasks during the sample collection period, providing a more representative test result. Pepsin testing is a very useful first choice tool for establishing which patients with throat symptoms have significant reflux disease. If problems persist following a negative pepsin test, then manometry/pH monitoring can be considered (these tests are normally carried out together).

Declaration of Competing Interests: Mark Watson has been reimbursed by Max Health, a Chinese company who market Peptest™ in China, for speaking at a symposium in China. 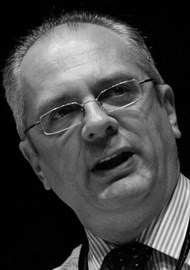