Although the da Vinci platform was FDA approved for early-stage oropharyngeal cancers, the indications have expanded. In this article, John Hardman explains how surgeons, with greater understanding of the strengths and limitations of robotic surgery, have systematically set out to generate new knowledge underpinned by the framework of robust scientific methodology.

Robotic surgery has become an established treatment option in head and neck squamous cell carcinoma (HNSCC). Several phase II and III studies are helping to build an evidence base to support the theoretical advantages it offers. Future machines may bring even more cancers into the remit of robotic resection where local control may be advantageous.

Where have we come from?

Minimally invasive natural orifice head and neck surgery sees many potential advantages over ‘traditional’ open techniques. Transoral robotic surgery (TORS) is just one method, but it has unique benefits over its alternatives. Firstly, the binocular high-definition endoscopes place the objective lens much closer to the pathology than when using microscopes or direct vision. Secondly, the precision instruments allow greater degrees of freedom within the body cavity than is possible with other techniques or devices.

Robotic head and neck surgery has been with us for a while, with the first report presented in 2003 [1]. Weinstein and O’Malley did much to pioneer its development in the early 21st century at the University of Pennsylvania, Philadelphia. They developed the transoral techniques using animal models, progressing from dogs’ larynxes to human cadavers, and then to live human surgeries in many areas of the upper aerodigestive tract [2]. In 2007, the first phase I prospective trial was published, showing promising results from lateral oropharyngectomies in 27 prospectively identified HNSCC patients [3].

Following these early proof-of-concept studies, the FDA licensed the da Vinci robotic system for early-stage oropharyngeal cancers. Since that time, adoption has exploded, with over 300 centres now offering robotic head and neck practice across the world. In the UK, the Royal College of Surgeons of England has placed significant weight on the role that robotic-assisted surgery will play in the future of healthcare in their ‘Future of Surgery’ report (updated 2021), as we strive to reduce morbidity and improve outcomes through embracing minimally invasive techniques [4]. 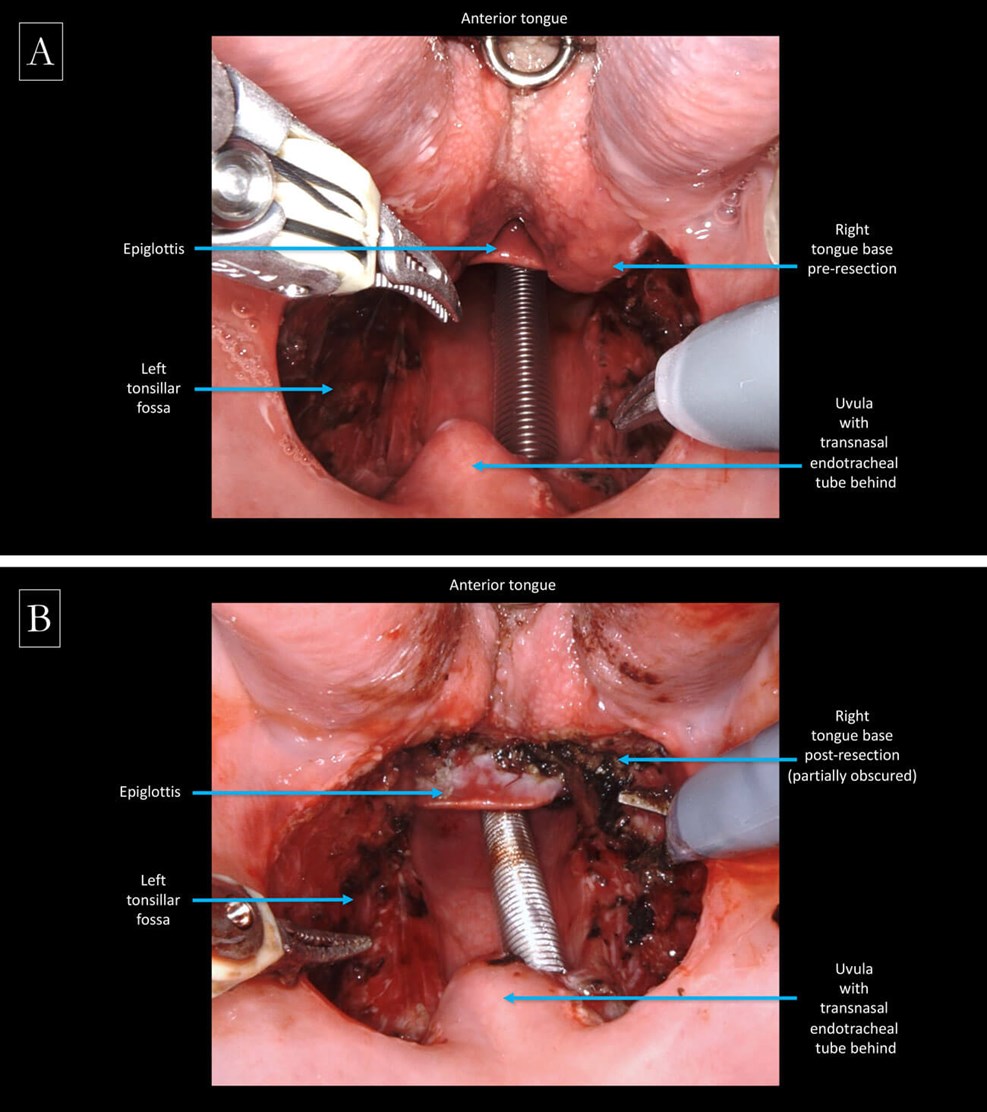 Intraoperative view of the oropharynx: A) before and B) after robotic tongue base mucosectomy,
performed to identify a primary focus in the case of a head and neck cancer of unknown primary.

The ‘Best of’ trial (NCT02984410), coordinated by Christian Simon and the European Organisation for Research and Treatment of Cancer (EORTC), is a phase III study randomising between transoral surgery and (chemo)radiotherapy, though it is not limited solely to robotic techniques and also includes supraglottic and hypopharyngeal cancers. The QoLATI Study, coordinated by Christian von Buchwald in Denmark, is similarly randomising early stage OPSCC patients, but limited to single nodal metastases less than 3cm, and focuses on quality of life outcomes over survival, though they will also be reported.

A number of studies aim to investigate the impact of reducing the intensity of adjuvant treatment protocols after transoral surgery for HPV-positive oropharyngeal cancer (OPSCC): PATHOS (NCT02215265), coordinated by Mererid Evans in Cardiff and Terry Jones in Liverpool, has moved from a phase II to phase III randomised trial but is, again, not limited to robotic transoral techniques alone. Results from PATHOS may offer further evidence for de-escalated treatment for these patients, thereby corroborating the findings of ECOG 3311 (NCT01898494) and the SIRS trial (NCT02072148), which are already published. ADEPT (NCT01687413) looked specifically at those who also had extracapsular spread in their cervical metastases, but was terminated early due to slow accrual and funding issues.

Other studies are looking to remove adjuvant radiotherapy entirely, rather than just reducing its dose. NECTORS (NCT04277858), coordinated by Nader Sadeghi in Montreal, Canada, is a single-arm phase II trial using induction chemotherapy, before TORS with neck dissection, for HPV-positive OPSCC. Robert Siegel in Washington is coordinating a similar study (NCT02760667) but looking at later stage OPSCCs. This study has finished recruitment but not yet reported.

Other studies are using the robot to enable more personalised treatment plans: the FIND trial (NCT03281499), coordinated by John de Almeida in Toronto, is a phase II non-randomised trial using TORS for diagnostic biopsies in HNSCC of unknown primary. It is hoped that sequential resection of the oropharynx, with intraoperative frozen section, may limit the volume of disturbed tissue in the hunt for the unknown primary to see who may be suitable for de-intensified targeted radiotherapy, by assessing their out-of-field failure rate within two years.

The MOSES Study (NCT04151134) is a UK wide multicentre study investigating the adequacy of current histopathological processing in the work up of HNSCCs of unknown primary, by subjecting tongue base mucosectomy specimens (obtained using transoral techniques) to step serial sectioning. It hypothesises that microscopic and/or multifocal HNSCCs presenting as unknown primaries may be missed by conventional histology techniques. The next phase of the study plans an exploratory molecular analysis to better understand the tumour biology of these primary cancers that evade clinical and radiological detection.

But it’s not all plain sailing for research involving robotics in HNSCC. ORATOR 2 (NCT03210103), coordinated by Anthony Nichols and his team in Ontario, Canada, was a phase II randomised trial comparing de-escalated primary transoral surgery (including TORS) and primary radiotherapy for OPSCC, but which was closed prematurely in February 2021 due to ‘toxicity’ in the surgical arm. The full report is awaited, but it is felt that the protocol requesting overly generous resection margins may have increased the risk of postoperative haemorrhage unnecessarily. What is considered an adequate resection margin in HNSCC is certainly not a fait accompli. Even now we have contemporaneous trials choosing different cut-points for what they consider a close margin (e.g. ADEPT, PATHOS/ECOG 3311). The STORM Study (IRAS 288901) hopes to shed more light on our understanding of reported margins in OPSCC, looking specifically at the rate of local disease control in a cohort of patients who have not received any confounding adjuvant therapies.

There are some more novel applications of robotic surgery emerging in HNSCC as confidence and experience with these machines grows. The first reports from transoral robotic total laryngectomies appeared in 2012, but there has certainly not been a major paradigm shift towards this approach in the last decade [5]. More successful may be retroauricular approach neck dissections, which were initially performed alongside transaxillary access for thyroid surgery, but are now seeing favour as the sole approach for neck dissections performed for squamous metastases.

Perhaps the most promising application for robotic surgery in HNSCC is not for any specific anatomical site, but rather for HNCs in previously irradiated fields, a cohort for whom salvage surgery may be one of only limited treatment options. Amassing data on these cases within single institutions is challenging. Meta-analysis of published reports from individual centres has shown promising outcomes, but results are inevitably susceptible to publication bias, even with the most robust methodologies. The RECUT Study (NCT04673929), coordinated out of The Royal Marsden Hospital, UK, hopes to go some way towards offering a more definitive answer by performing an individual patient data analysis of consecutive TORS procedures treated in tertiary referral centres from across the world. This will report soon on rates of local control and overall survival in selected patients with predominantly early-stage oropharyngeal cancers.

Robotic surgery is well established in the management of HNSCC and offers unique advantages to open resection and alternative methods. There is a growing evidence base, particularly in HPV-positive OPSCC, where it will be central to many de-escalation strategies in studies which prioritise optimising functional outcomes alongside survival. As technology improves, we are likely to see robotic surgery continue to challenge our assumptions of what is possible with minimally invasive techniques in HNSCC. 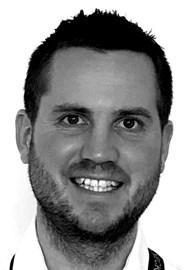