Since its advent in 1964 when Dotter percutaneously dilated a stenosed femoral artery [1], interventional radiology has undergone tremendous advancement in both imaging and devices that have enabled the operator (interventional radiologist) to access very distal small vasculature and perform procedures that were hitherto not possible.

The role of an interventional neuroradiologist in otorhinolaryngology is not only in therapeutic neurointerventional procedures such as in reducing intraoperative blood loss, as by preoperative embolisation of head and neck tumours, preventing active bleeding, as in controlling intractable epistaxis, carotid occlusion in threatened or imminent ‘carotid blowout’, but also in certain diagnostic procedures.

The main aim of tumour embolisation is ‘preoperative devascularisation’ of tumour prior to surgery. In some patients who are unfit for an anaesthetic, it may also be used as a palliative procedure.

Preoperative embolisation is most commonly used in the management of juvenile nasal angiofibroma (JNA) which is an uncommon benign tumour of adolescent males with a very rich blood supply. This lesion arises in the pterygo-palatine fossa and then expands aggressively into the nasopharynx and nasal cavity through the sphenopalatine foramen.

Embolisation is very effective in minimising intraoperative blood loss and is now a well-accepted part of the treatment of JNA [2]. (Figure 1 shows a case of preoperative embolisation of a juvenile angiofibroma). 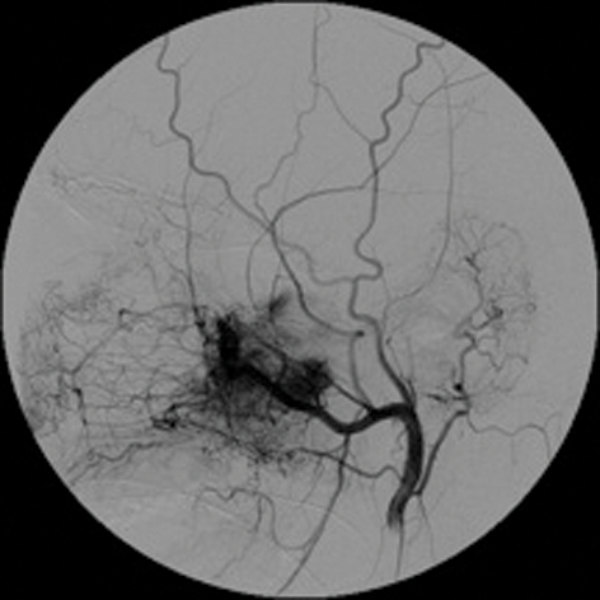 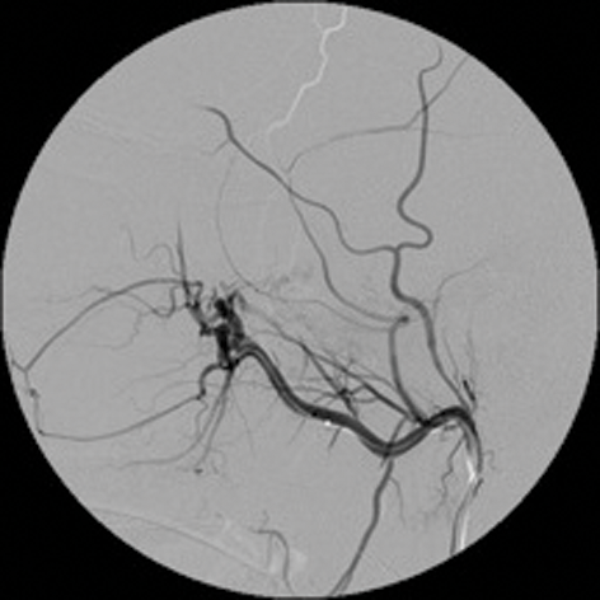 Figure 1: Juvenile angiofibroma before and after embolisation.

Embolisation is also effective in paragangliomas (glomus tympanicum, glomus jugulare and carotid body tumours). These are tumours arising from paraganglionic chemoreceptor cells which receive their blood supply from the ascending pharyngeal artery. They can be multicentric, locally invasive with malignant potential. Preoperative embolisation of paragangliomas greatly facilitates surgery and reduces the operative time and reduces the associated morbidity [3, 4]. (Figure 2 shows a case of preoperative embolisation of a glomus vagale tumour). 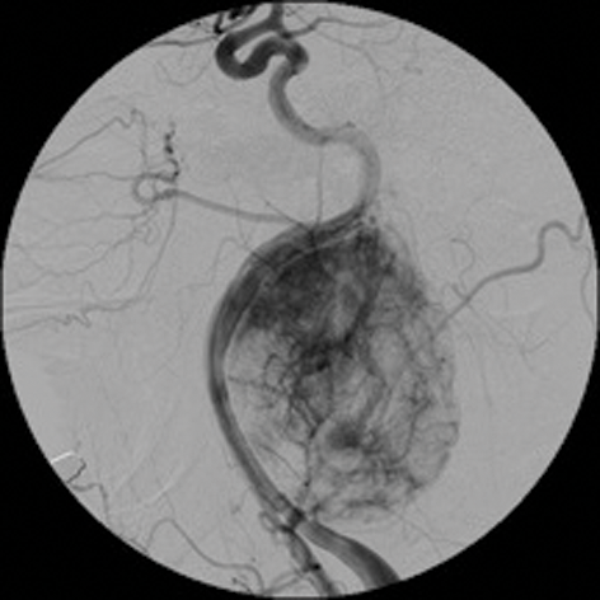 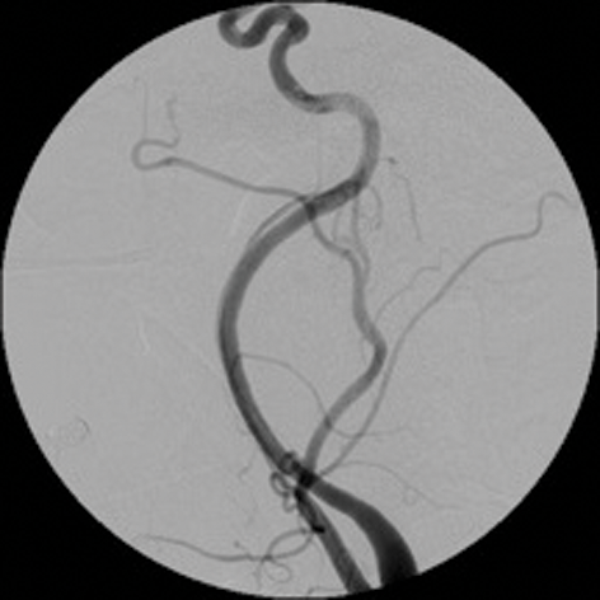 Figure 2: Glomus vagale before and after embolisation.

Arterio-venous (AV) fistulae are abnormal connections between arteries and veins which can be congenital, spontaneous or traumatic. Treatment of AV fistulae of head and neck also falls within the remit of interventional neuroradiology. These lesions are often difficult to treat surgically because of multiplicity of feeders and difficulty in access etc.

Endovascular treatment of AV fistulas involves preservation of the normal vasculature and occluding both the distal and proximal vessels of the fistula.

Detachable balloons, particles and / or sclerosants, and stents are used in the endovascular treatment of these lesions. (Figure 3 shows a case of a traumatic external carotid-jugular AV fistula treated by coil embolisation). 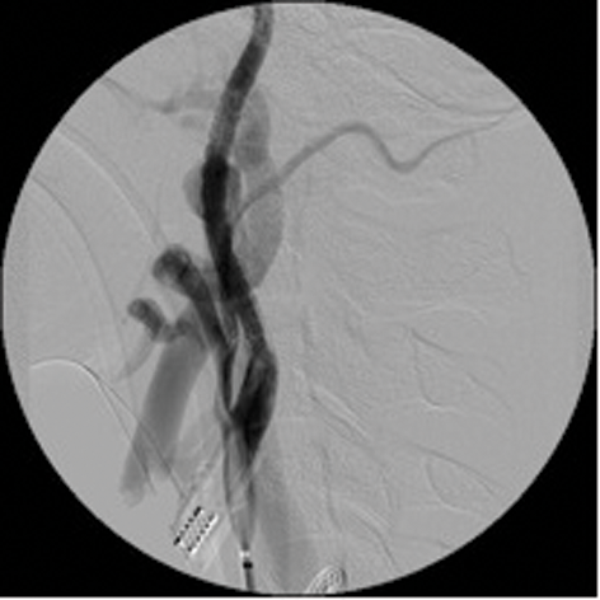 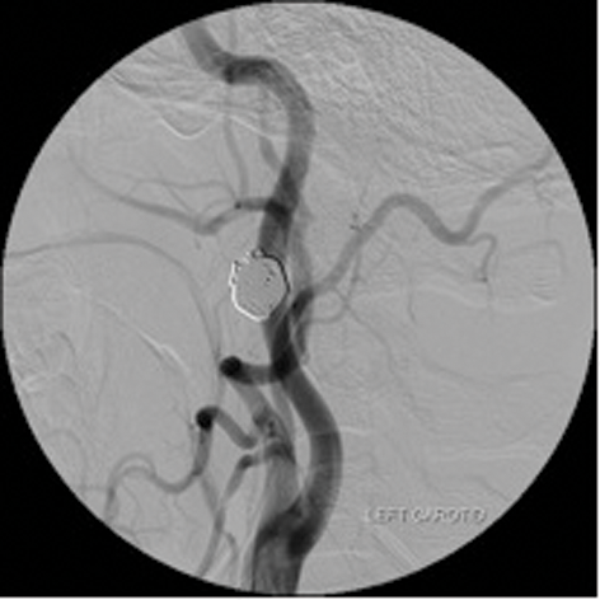 Figure 3: ECA- jugular fistula before and after embolisation.

Most cases of epistaxis are from an anterior nasal artery and are treated with simple procedures viz. cautery and nasal packing. However, interventional neuroradiology plays an important role in cases of intractable posterior epistaxis after failure of conventional treatment (posterior nasal packing). Super-selective embolisation of the bleeding artery with particles / coils is an effective treatment in such cases with a low complication rate [5-10].

Surgical procedures such as ligation of the anterior ethmoidal artery, sphenopalatine artery or internal maxillary artery may be performed in such cases. However, the minimally invasive nature of the endovascular technique makes it an attractive option. Also if for some reason the endovascular treatment is not effective there is always the surgical option available.

On the other hand once the internal maxillary or sphenopalatine artery is surgically ligated there is no safe access available to the interventional neuroradiologist. For this reason, in our centre, cases of intractable posterior epistaxis are first treated by the interventional neuroradiologist, with the ENT surgeon performing microsurgical ligation only if the endovascular technique is in effective.

Carotid blowout (both threatened and imminent) is a well-recognised, dreaded complication of advanced head and neck cancer, which occurs in up to 3-4% of patients following radical neck dissection [11]. Surgical ligation in such patients is technically difficult (due to ongoing infection, post-surgical / radiotherapy fibrosis) and it is often impossible to identify the exact source of bleeding. Surgery in carotid blowout carries approximately a 40% risk of mortality and 60% incidence of neurological complications [12, 13]. Traditionally such patients have been managed conservatively on an end of life pathway.

Endovascular treatment is now the gold standard for this condition. Three techniques can be employed by interventional neuroradiologists to treat ‘carotid blowout’. The first involves permanent balloon occlusion (PBO) of the carotid artery with a detachable balloon thus preventing blood flow into the bleeding vessel [12]. Prior to performing permanent balloon occlusion a ‘temporary balloon occlusion’ is performed with a non-detachable balloon in order to identify the patients at risk of cerebral ischaemia secondary to parent vessel occlusion. Such patients can also be treated by selective occlusion of the bleeding vessels, leaving the main carotid artery patent [14]. The third option involves placement of a ‘covered’ carotid stent [15-18], across the site of vessel blowout.

Despite successful treatment such patients can present with re-haemorrhage or with delayed stent thrombosis / stenosis [16, 17]. Hence all patients with threatened or imminent carotid blowout should be discussed in a multidisciplinary meeting to identify those patients in whom intervention would be beneficial.

With the continual ongoing improvement in imaging technology, microcatheter design and expansion in the interventional neuroradiological workforce it is anticipated that there will be a continuous expansion of the indications for using interventional radiological treatment [20]. In the future it may be possible to perform many of these procedures on an outpatient basis [21], which will require increasing collaboration between specialities in order to safely and effectively deliver these services.