We will all know colleagues who have raised the act of swearing to an art form; just as Malcolm Tucker in The Thick of It could cut a workmate in half with a well-placed swear word, surgeons can be equally foul-mouthed. John Riddington Young surveys the art and history of cursing.

As a young lad, my mother would take me to the dentist and sit there whilst he saw to my teeth. He was a kind old man called Mr Green (and a very good dental surgeon) but he hardly ever said a word. It was just after the war and he was ex-army and wore an immaculately white, short, starched jacket. When I got a bit older, I would go to see him on my own after school. Suddenly he was quite talkative, even garrulous, but he used bad language, the like of which I had never heard before. Almost every sentence had an expletive: “Hello, young John. What terrible f*****g weather again!” and so on.

Years later, I worked as a senior house officer for a great boss, who again was ex-army (in those days, one worked for a boss, not with a senior colleague!) He was born in Poona into a Colonial Service family and later served in the Indian Medical Service. He too would hardly utter a word whilst women were around, but as soon as we were alone or in exclusively male company, he would tell wonderful Kiplingesque stories about the old Indian Medical Service, effing and blinding at every end and corner. Both of these two estimable fellows were old-school gentlemen with impeccable manners and decorum and were, therefore, far too courteous to offend ladies with expletive language, but it was so much second nature to them that they found it easier to remain shtum in mixed company than to take a chance on letting an expletive slip out.

“In the University Library I found amongst the journals a copy of Verba Dejecta, a periodical devoted solely to swearing. I put the Lancet back on the shelf; here was far more interesting reading.”

The use of obscene language in the army is, of course, legendary. Davis Chatwin, the Regimental Sergeant Major of my old army unit, estimated that the use of expletives in the non-commissioned British Military comprises around five percent of all words! But does the bountiful use of expletives extend to the surgical field? It was an anaesthetist from Reading, during all those scintillating hours sitting at the end of the operating table (and presumably having finished The Sun crossword and puzzle page) who decided to do a definitive audit of swearing by surgeons to compare and contrast just how foul-mouthed surgeons of different specialties were. Unfortunately, he only gassed for general surgeons, orthopods, obstetricians, urologists and otolaryngologists, so we will never know where neurosurgeons, ophthalmologists, etc. come on his list. Perhaps somewhat predictably, the longer the list, the more swearing took place and, therefore, the ENT surgeons were the least expletive in the small series. Indeed, he concludes, “the mild-mannered ear, nose, and throat surgeons contribute little, with nearly five hours of operating time on average without any obscenity” [1]. 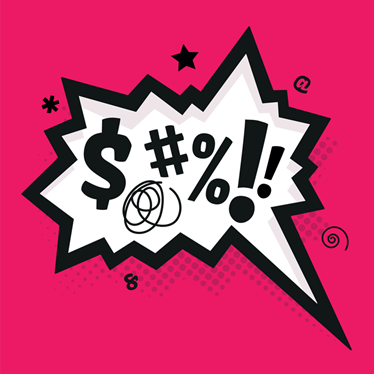 That was not the case when a ‘mild-mannered’ colleague was performing a particularly tedious head and neck procedure and a particularly tedious medical student was not helping a stressful situation by asking lots of banal questions and repeatedly sticking his head right in the way. Then it happened: after at least four hours of struggling to get things right, the student jerked his head forward causing his glasses to drop off his face and land slap-bang in the field of action. Our good-natured colleague merely looked at him and asked in a perfectly modulated voice, “would you like to s**t in the wound too?”

“There’s no doubt about it – some people are gifted swearers.”

Surgical stereotypes are vividly portrayed (somewhat tongue in cheek) in that essential little book, the vade-mecum for all otolaryngology trainees, Offbeat Otolaryngology, in which we hear:

“It must be difficult for a visitor to an operating theatre to identify the different players in the surgical orchestra. We ourselves have a reasonable idea who our colleagues are and in which specialty they work. Subliminally we identify the urologist by his preference to be shod in Wellington boots and wearing an apron: the orthopaedic surgeon is disarmingly frank about not being very bright, but is quick to point out that he can lift very heavy weights. The neurosurgeons can be found celebrating the success of an operation when the patient can post-operatively move all limbs in a semi-co-ordinated fashion. We would like to add the observation that the anaesthetist is the one who carries his pen fastened around his neck with a string. Research has shown that these were the chaps who had their mittens securely tied together through the arms of their duffel coat.” [2]

Another stereotype, of course, is the Australian and two colleagues aver that Down Under swearing is customary in the medical workplace and that some doctors even swear at their patients. They both told the story of an Aussie head and neck surgeon visiting a post-op neck dissection patient who happened to have a mullet haircut. The surgeon told his patient, “well mate we’ve probably got your cancer all out okay, but once you get out of here, for Chrissakes get a f*****g haircut mate - that mullet looks ridiculous!” It seems, however, that the nurses are a bit more sensitive. Teresa Stone, a nurse working in Australia, found that swearing at nurses causes distress and the nurses interviewed had few effective strategies to deal with it [3].

The whole subject of swearing has recently prompted a lot of serious scholarly academic research.I remember over 40 years ago when, as a student, I went into the university library and found amongst the journals a copy of Verba Dejecta, a periodical devoted solely to swearing. I put the Lancet back on the shelf; here was far more interesting reading. I was able to peruse learned articles from all over the world discussing how different cultures used various genres of swear words: English ones are based on sex and sexual acts, for example, whereas West Indian ones are based heavily on menstruation! Some cultures don’t use sex at all in expletives and cannot understand why we do. Sadly, Verba Dejecta is no more, although the interest in profane linguistics is certainly alive and well.Browsing through recent contributions, my favourite has to be by Jean-Marc Deweale who works at the University of London. He published a paper entitled ‘Christ f*****g s**t merde!’ about what language 396 maximally proficient multilinguals chose to swear in [4].

Another research paper points out that women swear just less than half as much as men in the UK. Younger people tended to swear more than older ones, particularly in the 15-24 age group. There is little proof that education plays a part but higher socio-economic classes used the f-word slightly more. There has even been work done which has found that, when diagnosing different forms of dementia, patients with fronto-temporal dementia are far more likely to use the word ‘f**k’ than patients with Alzheimer’s disease [5].

“The best I ever came across was a Regimental Sergeant Major from the Gloucestershire Regiment who could abuse recruits for a full five minutes without repeating himself once.”

There used to be a paucity of vocabulary (POV) theory which went something along the lines of: ‘one only swears if one doesn’t have a better vocabulary’. This was blown completely out of the water and the contrary was in fact found to be true: people with a greater vocabulary not only swear more than those with a poor mental lexicon, but they have a better profane vocabulary. There’s no doubt about it - some people are gifted swearers; the best I ever came across was a Regimental Sergeant Major from the Gloucestershire Regiment who could abuse recruits for a full five minutes without repeating himself once!

It has become quite clear that the use of the words, which (in Anglo Saxon times) we once considered as part of the vernacular then became taboo and, even as recently as the 1950s, were illegal to use in public. To use the two words, f**k and c**t in public was a criminal offence from 1847 right up to the 1960s [6]. This brings us to our last point: homosexuality, like ’obscene language’, was unlawful. Now you can get both on British television. My point, however, is that they were both taboo and both shocking. The language was used to create shock and even disgust. Now it no longer does this. So there we have it. Times have changed since I used to go to the school dentist!