The changing spectrum of cancer of the oropharynx: dilemmas and future directions
By Ian Ganly

The association of HPV in oropharyngeal cancer has identified a ‘new disease’, with its unique biologic behaviour, and challenges for clinicians in selecting therapeutic combinations offering maximum efficacy and minimum morbidity or long-term sequela currently under study in clinical trials. Ian Ganly tells us more… 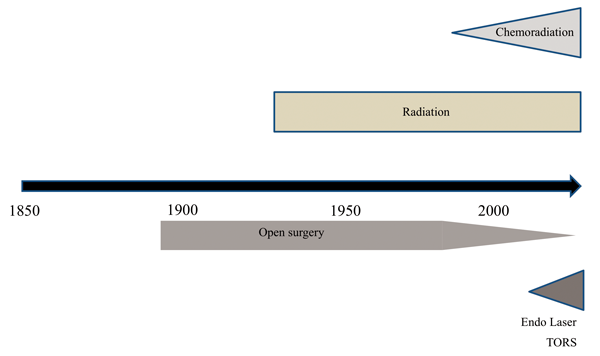 The treatment of oropharynx cancer has also changed over the past several decades (Figure 1). Traditionally open surgery followed by postoperative radiation was the main treatment. With the introduction of chemoradiation in the late 1990s producing comparable survival outcomes to surgery, there was a change in treatment modality, largely due to the morbidity associated with open surgery. Altered cosmesis, speech and swallowing dysfunction associated with mandibulotomy and mandibulectomy and shoulder dysfunction associated with comprehensive neck dissection led to an increase in the number of patients being treated with organ preserving chemoradiation.

However, it is now realised that chemoradiation is also associated with its own complications. These include the long-term effects on speech and swallowing from fibrosis of the pharyngeal musculature and laryngeal structures, dental complications due to lack of saliva, long-term taste disturbances, osteoradionecrosis of the mandible and long-term neurological alterations due to cranial nerve neuropathies. Since 2005 these chemoradiation related complications have led to an increased enthusiasm for minimally invasive surgical approaches such as transoral laser microsurgery (TLM) and transoral robotic surgery (TORS).

Oropharynx cancer caused by human papilloma virus tends to occur in a quite different population to that commonly associated with squamous cell cancer of the head and neck. Patients tend to be younger, often male and commonly do not smoke. The primary cancers are found to be small and metastatic disease in the regional large and cystic lymph nodes. Pathology also shows these cancers to be nonkeratinising poorly differentiated squamous cancers which are p16 positive on immunohistochemistry. These cancers are now recognised to have a far superior prognosis than HPV negative cancers. This was first recognised and published by Fakhry et al. in 2008 [1] in a prospective clinical trial in patients with oropharynx cancer treated with chemoradiation. In 2011, Ang et al. [2] published the results of the RTOG 0129 trial in patients with oropharynx cancer treated by chemoradiation showing that the three year overall survival of patients with HPV positive cancers was 82.4% compared to 57.1% for patients with HPV negative disease (Figure 2).

Figure 2: Overall survival in patients with oropharyngeal cancer stratified by p16 status treated by surgery and postoperative radiation or chemoradiation.

This superior outcome was not observed only in patients treated by chemoradiation; there are now several reports showing that HPV positive patients treated with traditional surgery and postoperative radiation had similar improved outcomes (Figure 2). The reason why HPV positive cancers have such superior survival rates is because these cancers have far fewer genetic alterations than HPV negative cancer. HPV positive cancer has less chromosomal instability, has far fewer mutations and also quite different mutations to HPV negative cancers.

A detailed analysis of the genetic landscape of HPV negative and HPV positive cancers was reported recently by the Cancer Genome Atlas project [3]. Unlike HPV negative cancer where mutations in tumour suppressor gene p53, oncogenes cyclin D1, MYC and overexpression of EGFR (epidermal growth factor) are common, HPV positive cancer has fewer of these genetic alterations. Mutations in the PIK3CA gene causing over expression of the PIK3/Akt/mTOR pathway are more common occurring in 30% of HPV positive cancers. In addition to improved survival, the RTOG-0129 trial identified different risk groups: low, intermediate and high, according to HPV status, smoking status and T, N status. Patients who were non-smokers and HPV positive were a low risk group with a three year overall survival rate of 90% in comparison to high risk patients who were smokers and HPV negative with an overall three year survival rate of 46%. Intermediate risk patients, largely comprising smokers who were HPV positive had a three year overall survival rate of 71%. Further work by our group (Iyer et al., 2015 [4]) recently reported that the same risk stratification was also present in surgically treated patients. This study reported that the prognostic factors predictive of outcome in HPV positive patients were different to HPV negative patients (Figure 3). 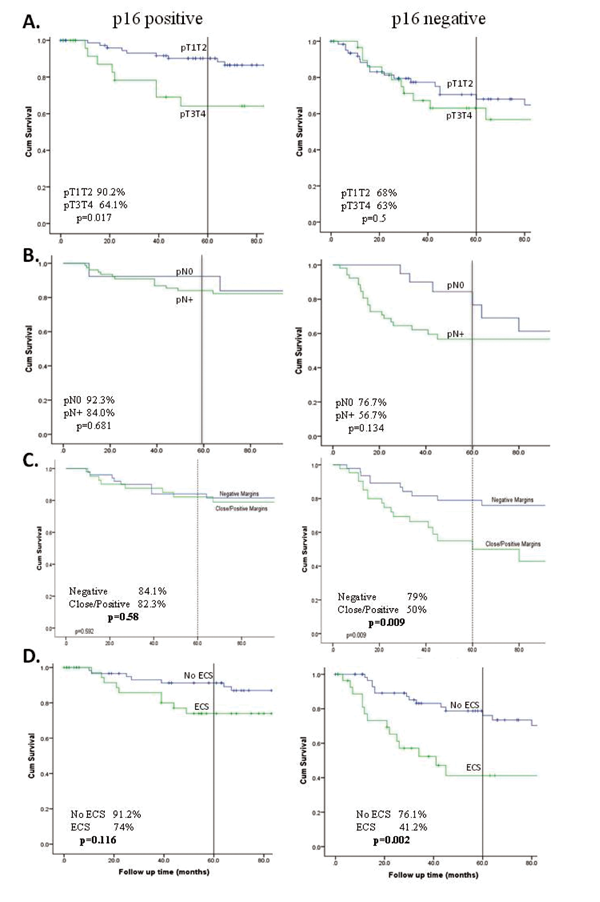 In HPV negative patients, multivariable analyses show that positive margins and extracapsular spread are independent predictors of outcome. In contrast however, these are not predictive in HPV positive patients. Instead, advanced T stage is the most important predictor of poorer outcome and subsite analysis shows that primary tumour in the tonsil has better outcomes compared to cancers in the base of tongue in HPV positive patients. The recognition of this superior outcome and the differing prognostic factors has led the AJCC to advocate for a change in the TNM staging system with patients who are HPV positive having a separate staging system. This separate system is expected to be introduced in 2016.

The increasing incidence of HPV oropharynx cancer, recognition that this represents a different disease necessitating a new staging system and the improved prognosis of HPV related cancer has ultimately led to proposals to deintensify treatment for these patients. Such deintensification involves using lower doses of radiation with smaller radiation fields, and using novel chemotherapeutic agents which target the molecular pathways altered in HPV positive cancer. In patients treated surgically, minimally invasive techniques such as TLM and TORS which avoid mandibulotomy, selective neck dissection which results in better shoulder function by preservation of the sternocleidomastoid muscle and accessory nerve, instead of comprehensive or radical neck dissection, as well as lower doses of adjuvant radiation are now under investigation.

With regards to radiation, the NRG HN002 clinical trial introduced in 2015 randomises HPV positive patients who smoke for less than 10 years with T1-2 N1-N2b cancers or T3 N0-N2b cancers to 60Gy radiation with low dose weekly cisplatin 40mg/m2 or 60Gy radiation alone. This trial has a reduced dose of radiation in both arms with one arm having radiation alone. The primary endpoint is a two year progression free survival of over 85%. Personalised dose reduction of radiation is also under study at Memorial Sloan Kettering Cancer Center utilising FMISO imaging to identify areas of hypoxia within the tumour and reducing radiation dose to areas which are non hypoxic.

Surgical deintensification is also now possible utilising advances in technology by either transoral laser microsurgery or transoral robotic surgery. These approaches allow for removal of primary tumours of the oropharynx by avoiding a mandibulotomy. Increased magnification and the use of frozen section control of margins has resulted in low positive margin rates using these techniques. Haughey et al. in 2011 [5] reported five year local control rates of 97% with disease specific survival of 92% in 171 patients treated with TLM with p16 positive cancers. Similar results have been reported with TORS in a multi-institutional study of 410 patients with two year local control rates of 92% and overall survival of 92% [6]. Reduction of adjuvant radiation doses has also been introduced in a randomised trial of TORS in T1-2 N1-N2b HPV positive oropharynx cancer patients. This trial, organised by the Eastern Cooperative Oncology Group [(ECOG) 3311 study (NCT01898494)] [7] randomises intermediate risk group patients to either adjuvant radiation at a dose of 60Gy or 50Gy (Figure 4). 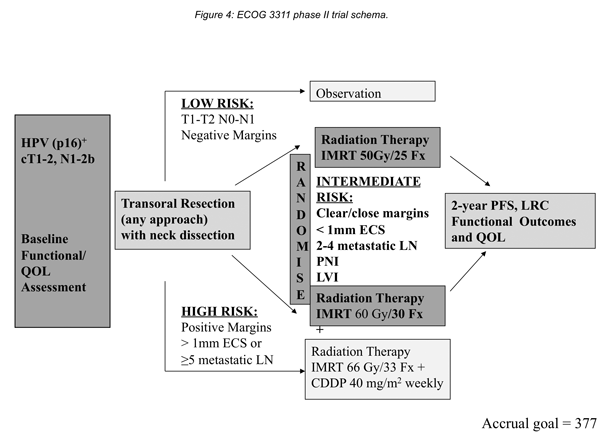 Currently it is true to say that in HPV positive oropharynx cancer there is no single treatment of choice, but there is a choice of available treatments. Early stage T1T2N0 cancers can be treated with either surgery alone or radiation alone. Advanced stage cancer (T1T2N1, T1T2N2b, T3T4N0, T3T4N+) can be treated with surgery and radiation, surgery and postoperative chemoradiation (positive margins and ECS) or by chemoradiation. It is anticipated that the results of deintensification trials will be available within the next five years and this will ultimately determine what the most appropriate modality of treatment with the best survival outcome and functional outcome is.

Dr Ian Ganly, MD, PhD, FRCS (Edin), FRCS (Glas), FRCS-ORL (Edin) received his training in otolaryngology at the University of Glasgow teaching hospitals in Scotland, UK and in head and neck surgical oncology at Memorial Sloan-Kettering Cancer. He was an attending head and neck surgeon at the University of Edinburgh, Scotland, UK from 2005-2008 before moving to his present position as attending head and neck surgeon at Memorial Sloan Kettering Cancer Center in 2008. He has expertise in all aspects of multidisciplinary care of cancer of the head and neck but has a special interest in minimally invasive surgery carrying out endoscopic laser resection of tumors of the larynx and pharynx and robotic surgery for cancers of the base of tongue and tonsil. He also has an interest in thyroid surgery and collaborates with scientists at MSKCC on the oncogenomics of thyroid cancer pathogenesis. His clinical research interests are in outcomes research focusing mainly on thyroid cancer and oral cavity cancer. Dr. Ganly has published more than 140 peer reviewed scientific articles and written several book chapters in the field of head and neck cancer. 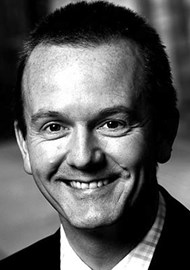