The HEARO Procedure for cochlear implantation
By Vedat Topsakal

Cochlear implants have become the state-of-the-art treatment for profound to severe sensorineural hearing loss. Since its popularisation, many aspects of this technology have constantly been optimised. Processors have become smaller, are worn behind the ear and are even water resistant.

With the clinical implementation of the HEARO® procedure, a robotically assisted and image-guided approach, a new era for cochlear implant surgery has begun. The improvements of hearing restoration with an implant start with an individualised approach from its early beginning and before the surgery: the 3D visualisation of the anatomy, the assessment of the cochlea size, the individualised electrode selection and the preoperative planning of the surgical access. The surgical planning enables us to tailor-fit the solution for every patient before the incision. The plan is then executed by the robot with an unmatched accuracy and precision in the range of microns, not millimeters. The high precision of action allows to predict the contact locations of the electrode within the cochlear and to estimate the stimulation frequencies for an optimal fitting. 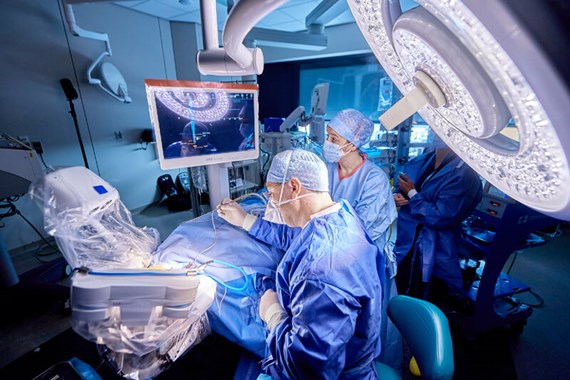 The feasibility of the robotically-assisted middle ear access was proven in 2016 by the pioneering work of Prof M Caversaccio in Bern, Switzerland in six of nine planned cases. A 1.8 mm keyhole was drilled from the cortex of the mastoid through the facial recess into the middle ear cavity, following manual drilling for access to the inner ear and insertion of the electrode. It is worth mentioning that the average size of the facial recess is approximately 2.5mm, resulting in narrow margins between the tunnel and the facial nerve e.g. the Chorda tympani.

Based on this previous work, our group in Belgium optimised accuracy of the prototype system and made the middle ear access even safer. Since then, the accuracy of the system has been improved and the challenge has changed from safe passage through facial recess to a safe passage through the round window niche. Evidently, passing a 1.8 mm cutting drill through a facial recess with an average size of 2.5mm is less demanding for a system’s accuracy when it has to align a 1.0 mm diamond burr to the centre of the round window and in line with basal turn of cochlea (Figure 1). So a second anatomical challenge is presented and studied. Safety and efficacy for inner ear access has been proven in 25 patients in Belgium. The HEARO procedure is now CE Marked for Europe. 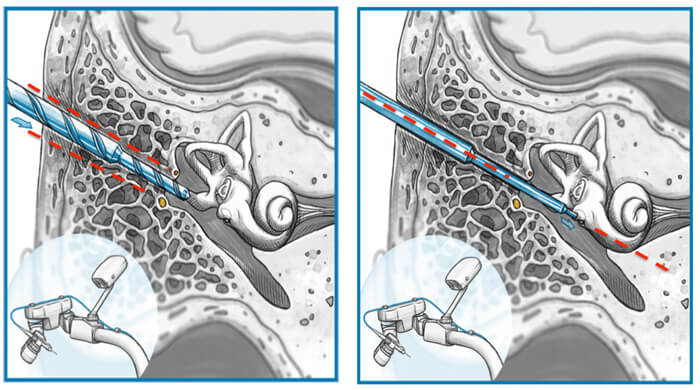 Today we have a scientific opinion on the best trajectory to enter the inner ear and also a system with an accuracy that enables safe keyhole access. The next step is to enhance this system with a robotic insertion of the array. In collaboration with CAScination AG (Switzerland) and MED-EL (Austria) the Vrije Universiteit Brussel (VUB) is eager to present this in the near future. 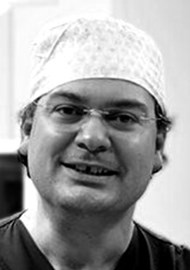