Welcome to BACO Liverpool: a city with deep roots in ENT
By Ray Clarke

Liverpool is a city steeped in ENT history, so it is fitting that BACO is being held there once more. Ray Clarke, former editor of ENT and Audiology News, casts his eye over the historical legacy of that fine city.

Liverpool has a long tradition in ENT surgery. A Liverpool Ear Institution was established in 1839, one of the first in Britain. This was at a time when otology was gaining ground as a scientific discipline and moving out of the hands of the early Victorian quacks and ‘aurists’.

The Ear Institution soon amalgamated with the Liverpool Ophthalmic Infirmary to form the Liverpool Eye and Ear Infirmary. In 1888 the Infirmary moved to the splendid ‘domestic revival’ style building designed by the celebrated Victorian architect CO Ellison. 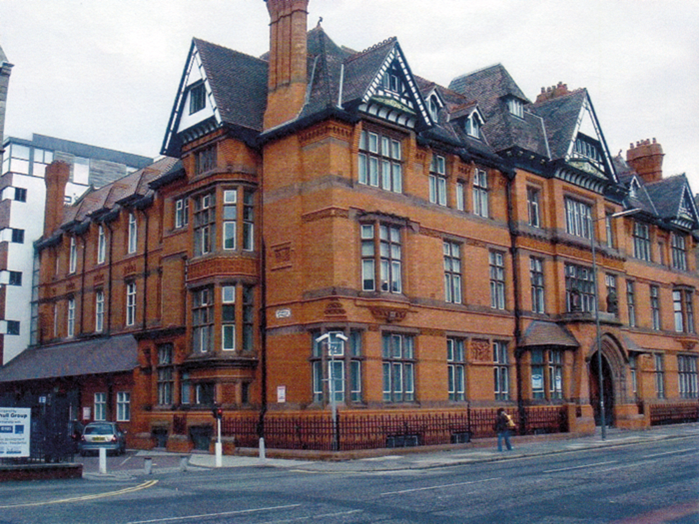 Mention of the old ‘Myrtle Street’ premises still brings a tear to the eye of many luminaries of the specialty who fondly remember working there as registrars until it closed in 1978 when ENT moved to the new Royal Liverpool Hospital. You can still see the old buildings in Myrtle Street – also the site of the precursor of Alder Hey Children’s Hospital. If you are lucky enough to get a ‘proper Scouse’ taxi-driver to pick you up from Lime Street station and you don’t get him going on football he will regale you with stories of the ‘old Royal’ and Myrtle Street hospitals, probably telling you he had his tonsils out there and stayed two weeks!

“Liverpool has a long tradition in ENT surgery. A Liverpool Ear Institution was established in 1839, one of the first in Britain.”

Liverpool ENT surgeons have certainly left their mark in the world of academia. John Middlemass Hunt was a native of Perth and a Glasgow graduate who studied otology in Vienna and settled in Liverpool from 1886. He was surgeon to the Liverpool Royal Infirmary and lecturer in laryngology to the medical school, a far-sighted appointment and one of the first academic roles in British ENT. Hunt served as President of the British Laryngological and Otological Society as successor to Morell Mackenzie and Dundas Grant. His 1898 presidential address recounted the history of what was then a fledgling specialty and paid tribute to the great triumvirate who gave birth to British otology – Wilde, Toynbee and Hinton (Figure 2). In his later years he served as honorary Dean of the School of Tropical Medicine – an important specialty in what was then a busy port city with a huge immigrant population. Hunt died in 1932. He endowed the medical school with £20000 to fund a chair in Tropical Hygiene at Liverpool Medical School, a post perpetuated to this day. 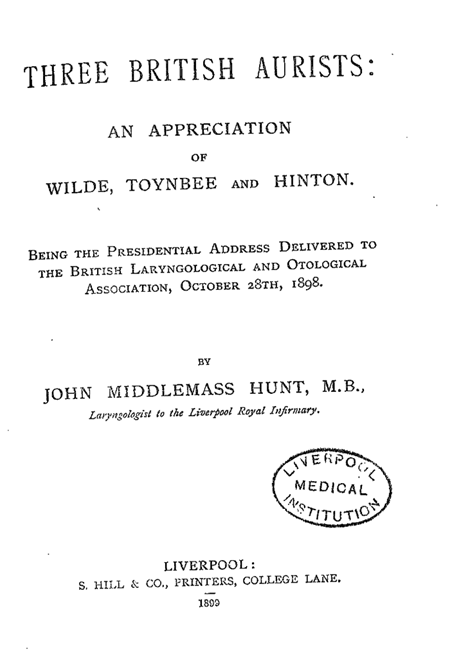 The dominant figure in modern ENT in Liverpool was Phillip Stell. A native of York and an Edinburgh graduate, Stell came to Liverpool in the early sixties following a residency under the tutelage of the fearsome but brilliant pioneering American head and neck surgeon, Joe Ogura, in St Louis Missouri. ENT surgeons had little if any role in head and neck oncology in Britain and Europe in those days and Stell would recount in later years how when he listed a patient for a total laryngectomy and neck dissection the theatre sister summoned him and demanded to know which of the general surgeons would be performing the operation as they were busy men who might not have the time and they would be very upset to hear of an ENT chap cutting the skin! 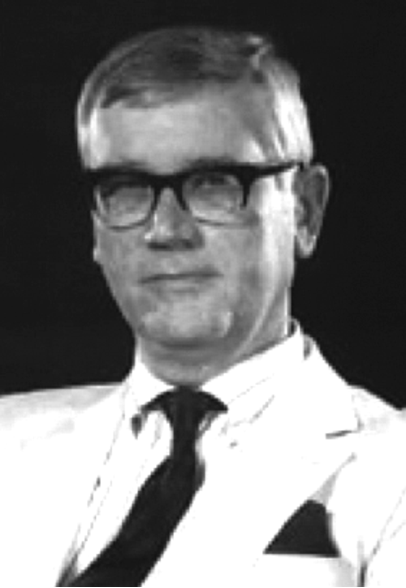 Stell’s pioneering work did much to advance head and neck oncology and for many years he, with Sir Donald Harrison in London and Arnold Maran in Edinburgh, was perhaps the dominant figure in British head and neck surgery and influenced countless of today’s leading lights in British and international ENT. Stell was a linguist, an accomplished statistician and a distinguished medieval historian. His presidential address to the Liverpool Medical Institution was on Charlemagne, and covered the role of political and economic events in Europe in bringing about developments in medicine and surgery since 800 AD and the days of the Holy Roman Empire.

“We ENTs punch well above our weight on Merseyside!”

Prof Stell retired at the age of 57 to pursue a career as a distinguished medieval historian in his native York, where he was awarded an MBE for services to history in 2004 but sadly died shortly afterwards. He is remembered with great affection and no little awe by the more senior of the current crop of Merseyside ENT surgeons (author included!), not just as a pioneering surgeon but as an outstanding doctor whose honesty and capacity for critical analysis of his work was decades ahead of that of his peers. His legacy is the fabulous head and neck oncology service now based at University Hospital Aintree, the Otolaryngological Research Society (ORS) and the journal Clinical Otolaryngology which he founded, but perhaps more importantly the high esteem in which British head and neck oncology is now held throughout the world.

Among the many offices Prof Stell held was the presidency of the Liverpool Medical Institution. This is one of the oldest medical societies in the world, now housed in a magnificent classical revival building from 1837, with a fine collection of rare medical books and of memorabilia relating to the history of medicine in Liverpool and North Wales. In more recent years two other Liverpool ENT surgeons have held this prestigious office – Andrew Swift and current president Max McCormick. We ENTs punch well above our weight on Merseyside!

We are not all about academia. If all the conference activities become too much for delegates there are several excellent guided walks they can take to see the city at its finest. Take time to enjoy the magnificent waterfront , much of which dates from Georgian and Victorian times when great liners set sail from the port of Liverpool and the docksides were bustling hubs thronged with ‘huddled masses’ en route to the ‘new world’. You can visit the old White Star Line booking offices – now a slick hotel – and relive the experiences of both first class and ‘steerage’ passengers at the Mersey Maritime Museum. Old timers like me can hang out at the ‘Beatles Experience’ and air-guitar for all they are worth, thinking what might have been if they were a bit less studious in school all those years ago! Try one of the ‘fab four’ themed tours and feel sorry for today’s youngsters and the music they have to put up with. You can trace the footsteps of Open Champions Tiger Woods (2006) and Rory McIlroy (2014) as you stride the fairways at the Royal Liverpool Golf Club. If you are feeling adventurous take a trip up the coast, talk nicely to some of the local faculty and get a game at Royal Birkdale where Harrington came good in 2008.

If you prefer, just chill out in one of the many bars and restaurants that come to life during balmy summer evenings. Most important of all, the locals, including – especially even – the ENT surgeons are friendly and welcoming! Do come and say hello to us in July! 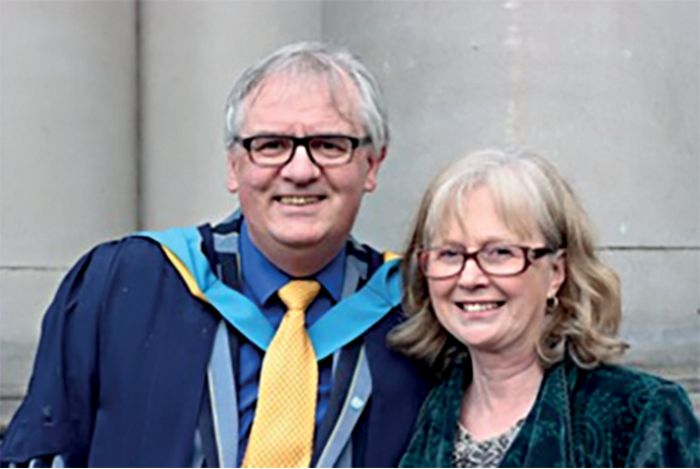 Ray with his wife Mary at the Open University awards cermony in Edinburgh in May where he was awarded a first class honours degree in Literature. 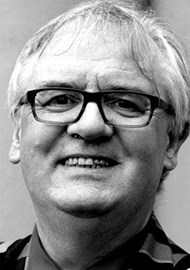