Why does music move us? Music as auditory signals of emotion
By Sandra Garrido

Music forms an integral part of the lives of people in all known cultures around the world. In this article Dr Sandra Garrido explains that in fact, our response to music is largely innate and is related to the evolutionary importance of sound as an acoustic signal of danger in the environment and in non-linguistic communications of emotion.

Harvard scientist Steven Pinker is notorious amongst scholars of music for having called music ‘auditory cheesecake’ [1]. Pinker’s claim is that - much like cheesecake - music is nothing but a pleasant by-product of the processes of evolutionary selection, and not something essential to human survival or reproduction. However, music has been, and is, a part of every known culture on earth, albeit in varying forms. If not crucial to our existence, why is music so integral to human life and why does it have such power to move us? 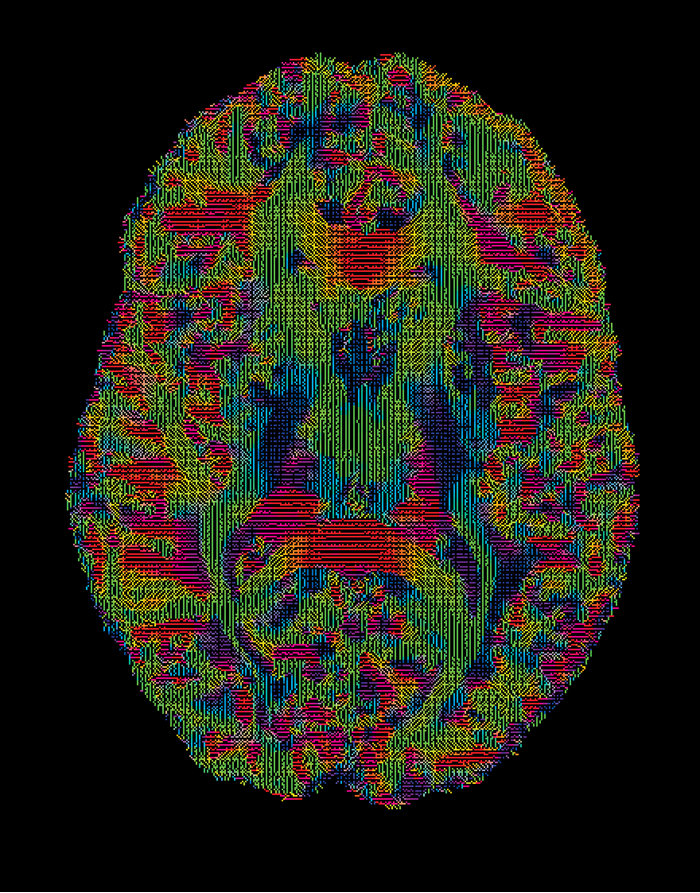 Diffusion tensor image of white matter fibre tracts in the brain of a musician.

The fact is that our brains are programmed to respond to many kinds of auditory cues rapidly and instinctively. Evolutionarily, sounds signal information about our environment that is important for survival, and that trigger brain responses that are largely involuntary. The sound of a door slamming, for example, may elicit a startle response in which the central nervous system is activated causing the individual’s heart rate to increase and their muscles to prepare for instant ‘fight-or-flight’ action. Musical sounds can also activate these sorts of instantaneous arousal responses in the listener.

“Our brains are programmed to respond to many kinds of auditory cues rapidly and instinctively… Musical sounds can also activate these sorts of instantaneous arousal responses.”

A phenomenon that has been studied in some detail in our laboratory at the MARCS Institute for Brain, Behaviour and Development, is that of ‘entrainment’. Entrainment refers to the tendency of two bodies to lock in to a common phase and periodicity, i.e. to begin to oscillate in synchrony with each other. A simple example of this is the compulsion to tap our foot in response to regular, repeated patterns of sound, whether it be the latest dance track or a leaky tap. It’s not only our feet that entrain to an external rhythm. Our respiration rate varies with the tempo of a rhythm, and, as shown in an EEG study by MARCS researcher Dr Sylvie Nozaradan and colleagues, the synchronisation even occurs at a cortical level [2].

Similarly, Dr Bronson Harry from MARCS is conducting MRI studies showing strong white matter connections between auditory and motor regions of the brain in people with high levels of synchronisation ability, demonstrating the close association between sound and movement. It is likely that these synchronisation tendencies served important functions in helping to coordinate and regulate group behaviours in our ancestors. 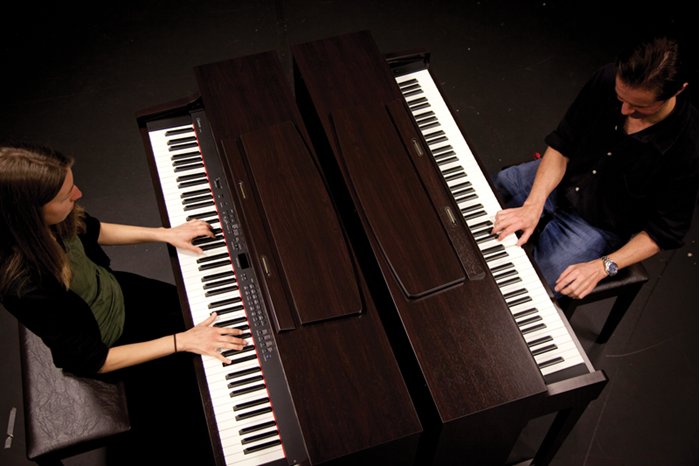 Two pianists in a synchronisation study.

Music and emotion communication in speech

There are close connections between music and speech. For example, Jia Hoong Ong at MARCS has discovered that similar learning mechanisms are used for both musical pitch and speech phonemes [3]. Speech also contains non-linguistic components that are quite similar to music – rhythmic and melodic elements known as ‘prosody’ – which are crucial to communicating meaning. We begin to learn the meaning of these auditory signals even from within the womb when the sound of our mother’s voice provides our first training in emotion perception. After birth, parents around the world typically engage in a form of exaggerated and highly melodic speech known as ‘parentese’. These kinds of communications are crucial to infant-parent bonds.

“Even sad music can serve important psychological functions, causing some individuals to experience peak mental states such as absorption, and allowing others to reflect and work through cognitive processes in order to deal with emotional events in their lives.” 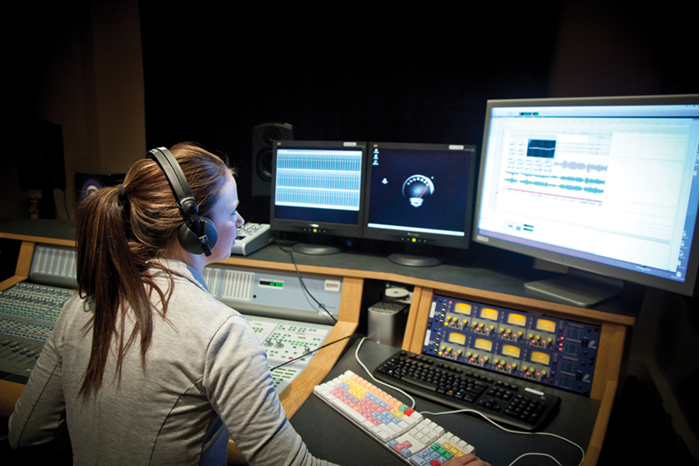 MARCS Researcher studies the psychoacoustic properties of music and speech.

Babies make use of non-verbal communication as well. When a baby cries, both parents and non-parents find it almost impossible to ignore, demonstrating acute responses to the sound in emotion-related centres of the brain. In short, because of the high dependency levels of human infants, we are biologically programmed to have intense reactions to their sounds of distress. Remarkably, some people also experience a particularly intense physiological response to music involving feelings of chills down the spine, and ‘piloerection’ or goose bumps. These reactions typically occur in response to certain types of acoustic cues such as high pitched, intense vocals – think Celine Dion or Whitney Houston – and some scholars posit that the powerful effect these musical cues can have on some people is related to the brain response associated with infant separation calls. Thus, once again, our response to music seems to be closely linked to deep biological survival mechanisms.

In addition to its communicative value, music also plays an important role in modern day life as a mood regulatory tool. My colleagues and I have found that people instinctively use music to help them cope with emotions in daily life. For example, they may use music to distract them from distressing thoughts, or to modulate their arousal levels – using upbeat music to give them a pick-me-up and relaxing music to de-stress. Even sad music can serve important psychological functions, causing some individuals to experience peak mental states, such as absorption, and allowing others to reflect and process emotions triggered by events in their lives [5]. 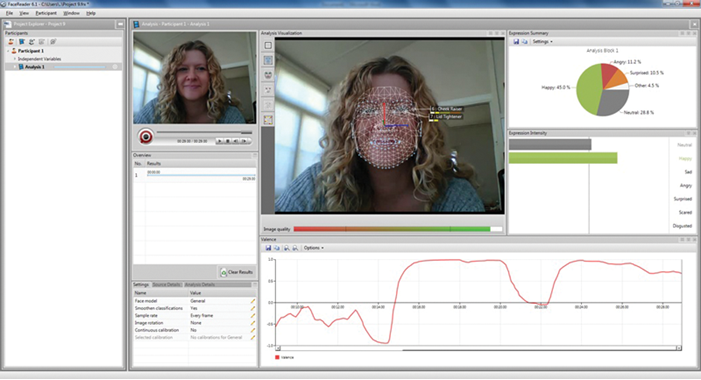 Whether or not music has played any part in human survival or is just ‘auditory cheesecake’, it is evident that music plays a central role in human life. As auditory signals of emotion, music evokes intense responses that are closely connected to innate survival mechanisms. However, music also represents what it means to be human - the ability to reflect on our own emotions and even manipulate them. Just as emotions themselves likely serve slightly different biological purposes today to what they did tens of thousands of years ago, the role of music has likely evolved as well. However, it remains a powerful part of the emotional life of humans all over the world.

Sandra Garrido is a research fellow at the MARCS Institute for Brain, Behaviour and Development at Western Sydney University. With a background in both music and psychology, her research interests are on the influence of music on mental health, both historically and in the modern day, with a particular focus on depression and dementia. Sandra has authored over 40 academic publications including a book due for release in November 2016 with Palgrave-Macmillan entitled Why We Are Attracted to Sad Music. 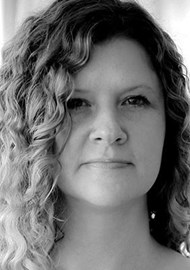